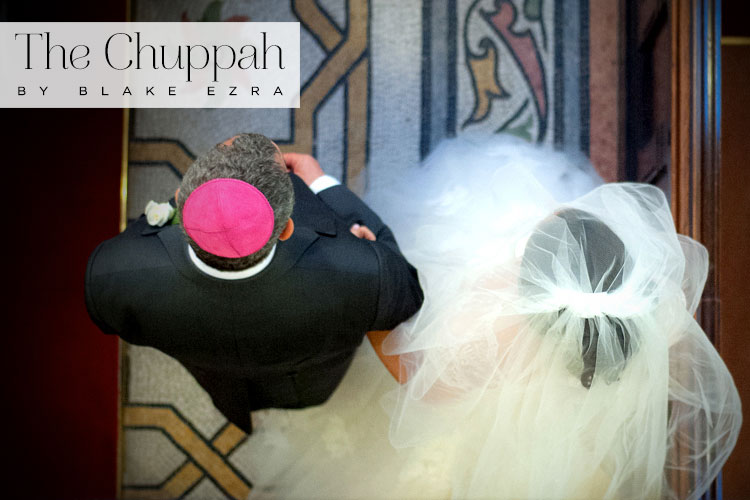 All imagery by Blake Ezra Photography. This is part 5 of the 9-part Jewish Wedding Traditions Explained series.

The word ‘chuppah’ is used in two ways. Firstly, it’s the Hebrew name of the canopy under which Jewish couples get married. Secondly, it’s also colloquially used as another word for ‘ceremony’. So if someone asks you “When’s the chuppah?” don’t assume they’ve lost all grasp of how to put a sentence together, they’re not asking when the canopy is, but when the ceremony starts.

So what is a chuppah? Why do Jewish couples get married underneath one? What do they do when they get there?

The chuppah, like many elements of a Jewish wedding, is beautifully symbolic. It symbolises the home that the couple will build together in their married life, and is open on all sides like the biblical tent of Abraham and Sarah, signifying that everyone is welcome and that everyone will be treated hospitably.

For readers of this blog, who may be planning their own Jewish wedding, the chuppah is also one of the great opportunities to personalise your ceremony. It can range from a massively decadent, custom-designed piece of floral artistry, to four friends holding poles, upon which sits a custom made quilt or Jewish prayer shawl, called a Tallit.

Before we get to the couple standing under this symbolic canopy, there’s a gorgeous tradition involving the guests. If there are married couples who’ve been invited to the wedding, and the couplees wish to emulate their successful and long marriages, they can ask these couples, in private before the wedding, to walk down the aisle together at any point before the ceremony, as everyone else is milling around and taking their seats – without fanfare, without anyone even noticing. This way the couple can literally walk in the footsteps of these couples, whose marriages they look towards for inspiration. This beautiful concept, of course, can be used in any type of wedding of any religion.

So, the two of you each walk down the aisle to music, and whilst there are many traditional songs that compliment the occasion, this is another opportunity to be creative in the context of an age-old ceremony. Established musical pieces include Eshet Chayil for the Bride, a song which celebrates women in the Jewish religion, and Hinei Melech Hakavod for the Groom, a marching style tune which celebrates the Groom as ‘King’ for the day. Other wonderful Hebrew songs, which are often used in the procession, are Erev Shel Shoshanim and Meheira — no doubt they are stirring, emotive and very Jewish pieces of music.

If you’re an avid reader of Smashing The Glass, and you’re planning your own big day, there’s a chance you may not always gravitate towards the traditional. We’ve been lucky enough to photograph a wedding where the instrumentals of ‘Juicy’ by Notorious BIG were chosen by the Groom, and I myself walked down the aisle to a bass-heavy piece of Israeli Ethiopian Reggae. The most important thing in my opinion is that it represents the couple, that it makes them feel how they want to feel when approaching the chuppah.

Without explaining every element of the ceremony, as future instalments in coming weeks will touch on the main ones, let’s look at the first part — the circling. Once the couple stood under the chuppah, it is traditional in Orthodox Judaism for the Bride to circle the Groom seven times, often leading to slightly confused faces and unsure giggles at the fifth or sixth round. There are many reasons behind this, one powerful one being that the Groom becomes the centre of the Bride’s world.

As one may expect, different types of Jewish ceremonies sometimes take a diverse stance on circling. Indeed we’ve photographed ceremonies where the Bride circles the Groom three times, the Groom then circles the Bride three times, and finally they walk around each other in a figure of eight, symbolising a totally equal relationship between two people. The truth is that many parts of the Jewish ceremony can be, to some extent, tailored towards the very unique couple getting married under the chuppah, every Rabbi will give their own guidance about what is possible and what isn’t.

Whoever does the circling, and however many times they go around, there is one personal touch that can make this tradition extra powerful. That is when the couple plans in advance to think of (or even pray for) their particular hopes and wishes, each time one circles the other. It could be that the first time around, they both pray that they’ll be blessed with children, the second time they both hope that their own families will come together harmoniously, the third time around they wish for a life of good health together… and on until the seventh. If there were ever a day to seriously consider and ask for the things you desire from a life alongside your wonderful soul mate, your wedding day is as good as any!

In next week’s instalment of Jewish wedding traditions explained, we’ll look at The Seven Blessings given to the couple under the chuppah…