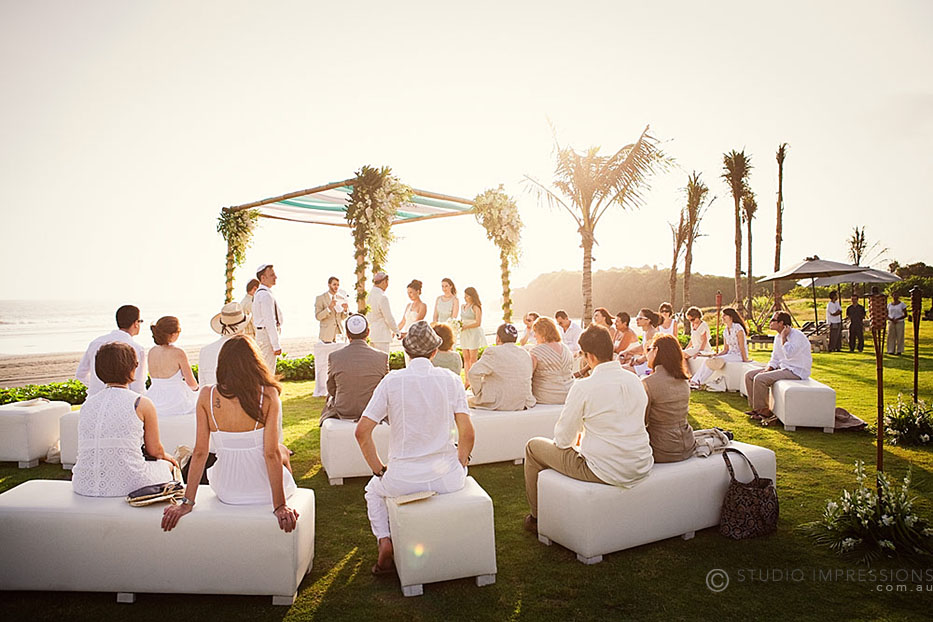 4. Blessings of Betrothal (Kiddushin)
Two cups of wine are used in the wedding ceremony. The first cup accompanies the betrothal blessings, recited by the rabbi. After these are recited, the couple drinks from the cup.

The betrothal blessings express the resolve of the bridegroom and bride to create a Jewish home, dedicated to G-d and to the well being of humanity.

5. Giving of the Ring
In Jewish law, a marriage becomes official when the groom gives an object of value to the bride and this is traditionally done with a ring. The ring should be totally plain, without stones or marks â€• just as it is hoped that the marriage will be one of simple beauty.

The couple now exchange rings and declare their betrothal vows to each other. The words, “by this ring you are consecrated to me according to the law of Moses and Israel” form the essence of the marriage service. The circle of the ring is a symbol of the eternal nature of the marriage covenant. 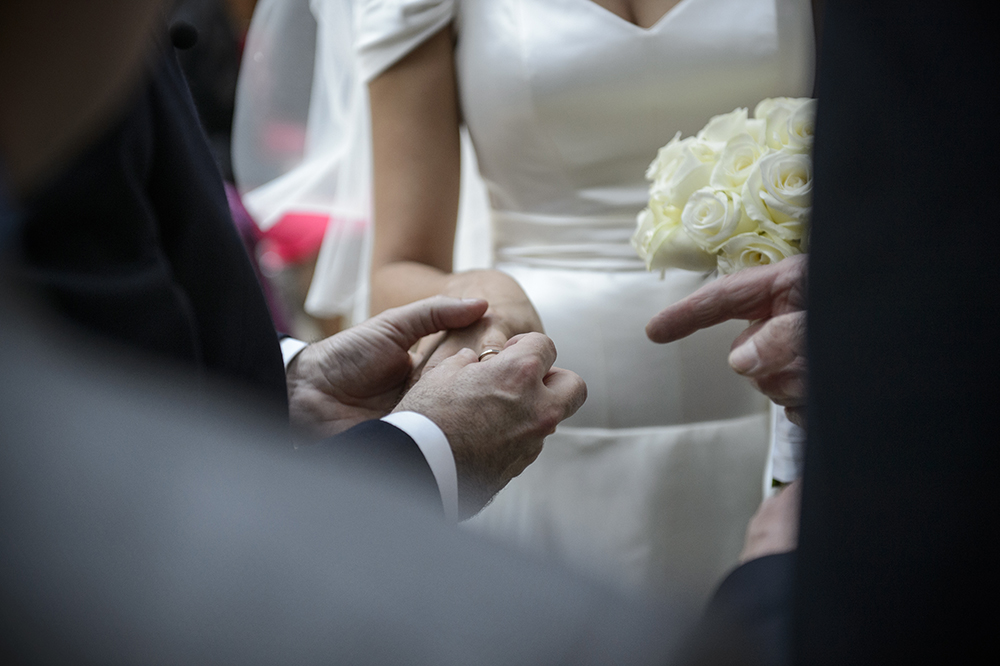 [ Image: The giving of the ring at my wedding to Jeremy by Earthy Photography ]

6. The Reading of the Ketubah
The ketubah is then read in the original Aramaic text and is given to the groom for him to hand to his bride and for her to hold on to for all the days of their marriage. It has the standing of a legally binding agreement and is the property of the bride.

7. The Seven Blessings
The Seven Blessings (Sheva Brachot) are now recited over the second cup of wine by the rabbi, or a chazan, or other people that the couple wish to honour. These blessings are very ancient and set the bride and groom into a wider social and sacred context. They are arranged as follows:

1. Blessing over the wine — symbol of joy
2. Blessing praising G-d to whom all creation proclaims praise
3. G-d is praised as Creator of humanity
4. G-d is praised Who created humanity in the Divine image.
5. Hope for the messianic future
6. Prayer for the happiness of the bride and groom
7. The individual hope for happiness for the couple is combined with a prayer for joy in the messianic future.

After the seven blessings, the bride and groom share a second cup of wine. 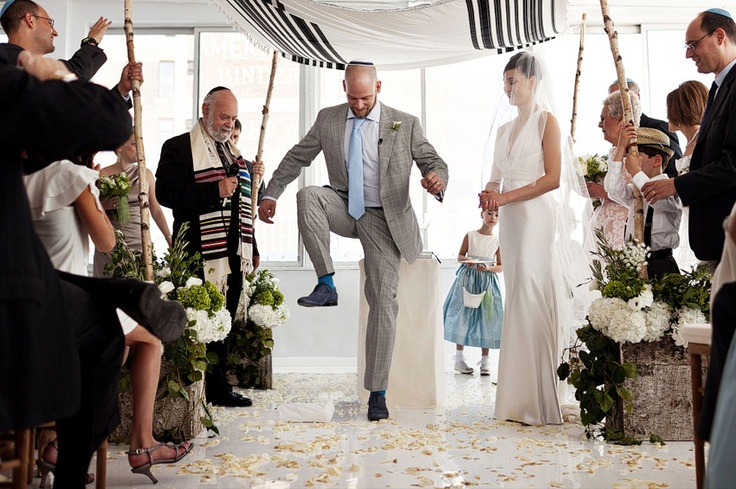 8. Breaking of the Glass
The conclusion of the ceremony is marked  by the groom stamping on a glass and smashing it underfoot. It is the official signal to cheer, dance, shout “Mazal Tov!” and start partying!

But there are various other explanations depending on whom you ask. Some of them are that it:
1. is a representation of the fragility of human relationships; and a reminder that marriage will change your life (hopefully for the good) forever.
2. is a superstition and the loud noise is supposed to drive away evil spirits.
3. is a break with the past: the marriage is to last as long as the glass remains broken, ie. forever.
4. symbolises the destruction of the Temple in Jerusalem some 2000 years ago.
5. symbolises a hope that your happiness will be as plentiful as the shards of glass, or that your children will be as plentiful as the shards of glass.

Again get creative and mix up a variation of this tradition if you so fancy eg. why not both break the glass together with one swift smash in unison? 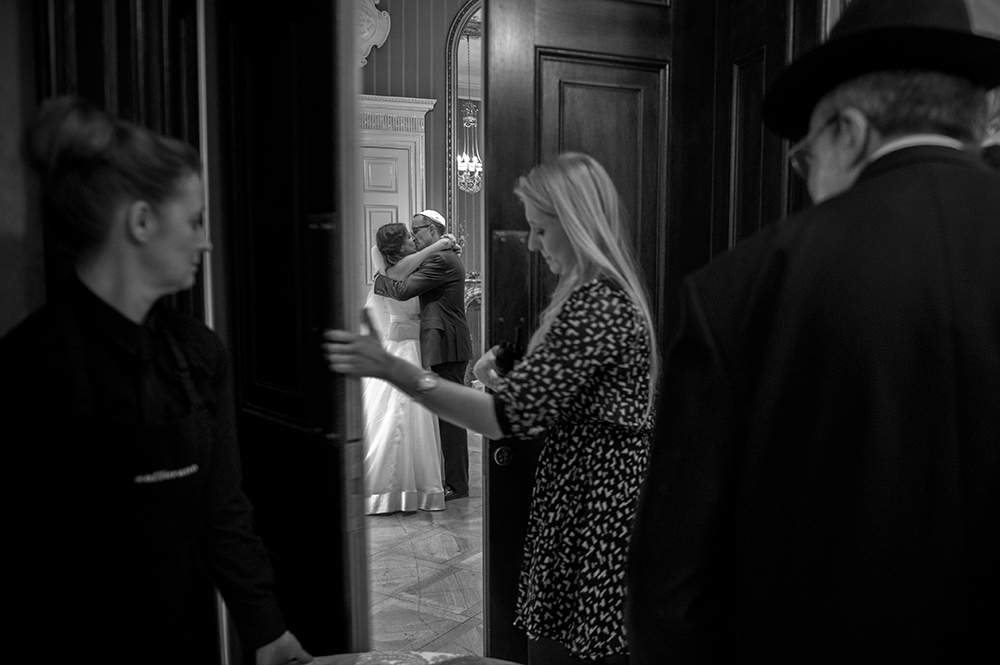 [ Image: A sneak peek of my yichud with Jeremy (just as the door was closing!) at my wedding by Earthy Photography ]

9. Yichud — Private Reflection
Once the just-married couple have processed out of the ceremony area, the final part of the ‘order of service takes place and that’s the Yichud. It is considered to be one the most intimate and private parts of the day. The bride and groom are required to have time alone away from family and guests to reflect on what just took place — their marriage — before joining the party. In times past this is when the marriage would have actually been consummated!

So there you have it — everything you need to know. I might just add that the spiritual significance of a Jewish wedding is sometimes lost in all the madness of putting it together. If there is one piece of advice I would give every bride it would be to try to experience the pure and sacred side of a Jewish wedding as much as possible.

Thank you to Rabbi Neil Janes and Aish for contributing to the words in this guide.

Do you have a wedding-related question that you’d like me to answer in Dear Karen? Either email me or leave it in the comments section below. I look forward to hearing from you! 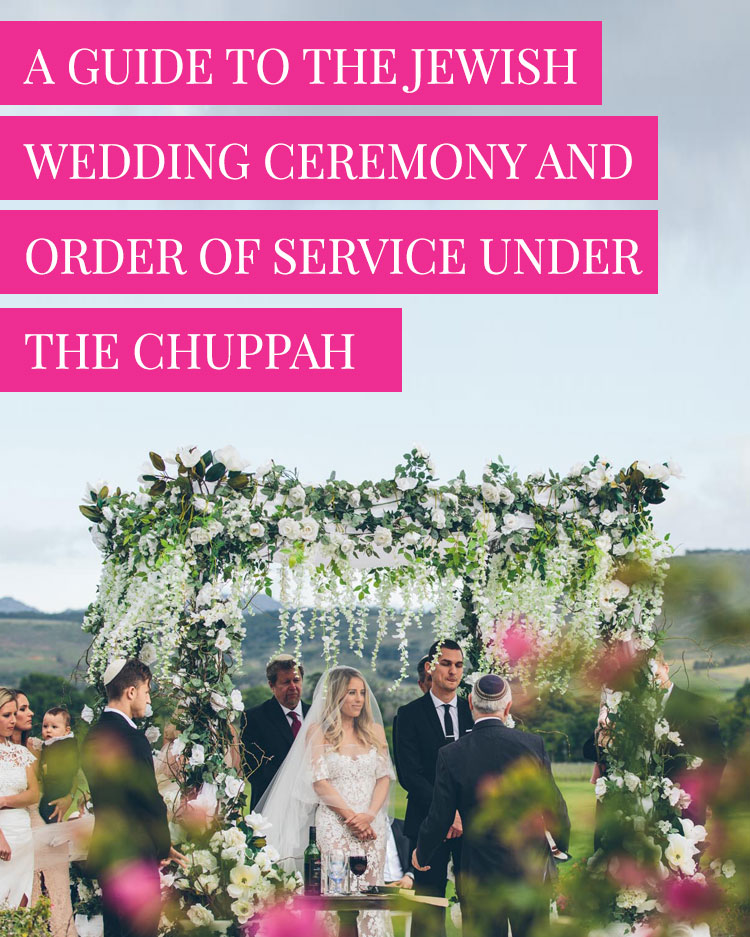