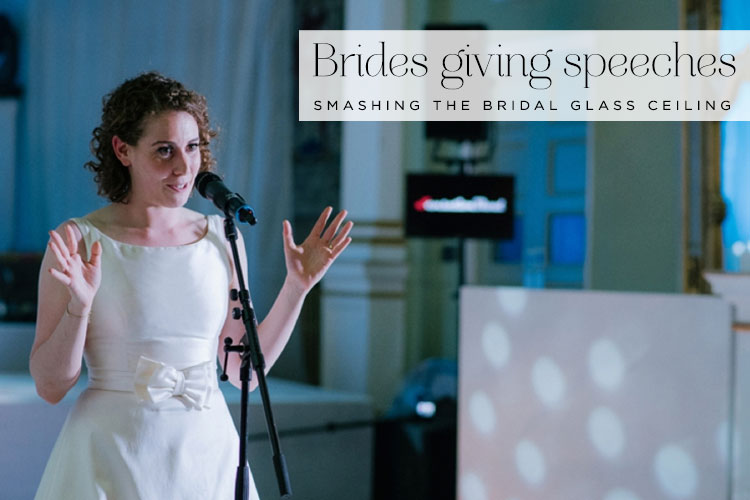 This is a guest post by  Lucy Jenkins (pictured above),
a newlywed television publicist living in London,  whose wedding I  featured on the blog last month.

Over the last few years there has been a huge renaissance in the rise of feminism, with women pushing for the right to equal pay, equal rights and against every day sexism. In the wedding industry, an industry which revolves predominantly around women, it seems bizarre that there are so many antiquated rules that determine how we create our wedding days.

Over the past year I was asked on a nearly daily basis how ‘my’ wedding plans were going, and very rarely did anyone assume that my husband was involved in the intricacies of the planning process. There were constant references to ‘Lucy’s wedding’ and a general assumption that the big day was higher up on my agenda than his. It is an extraordinary set of circumstances and outdated behaviour that a wedding day seems to belong to the bride, and yet her voice is the only one that we do not hear.

After many years working in publishing and now in television I spend my days talking non-stop, and you’d think that when I leave the office that my ability to talk and talk and talk would diminish, but it never seems to. When Matt and I first met, on a flashing dance floor of a club, he offered to buy me a drink and we spent the next three hours sitting in the corner talking about anything and everything under the sun.

Our first few dates lasted until 2 or 3am, moving from restaurants to bars, watching last orders being called around us while we were lost to the world deep in conversation. We are both chatterboxes, we love regaling our friends with stories, working any problems out by talking them through, having heated debates and are most definitely not known for our shyness. And yet when it came to planning our big day he seemed a little taken aback that I wanted to stand up on stage and say a few words. 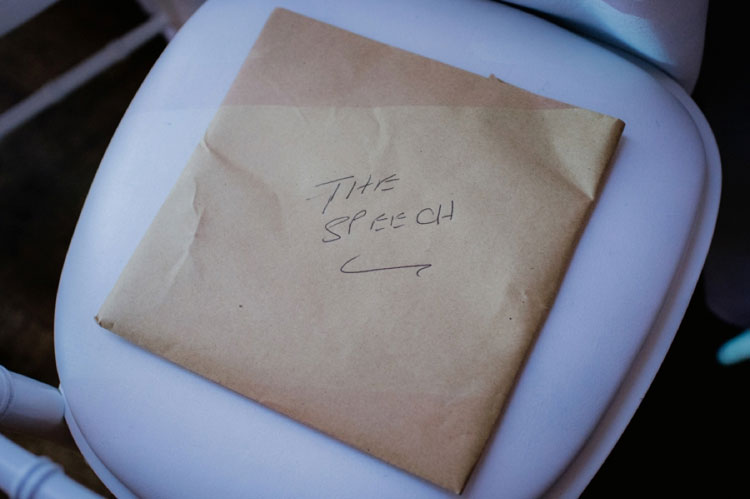 I’ve been to countless weddings where father-of-the-bride tells the guests how beautiful their daughter is, but what about how clever, interesting, funny, kind, resourceful, hardworking she is? Of course, brides are beautiful on their wedding day, there is a certain glow that comes with the big event and yes this is important, but it isn’t the be all and end all. The focus falls on a serene, beautiful bride, who despite pulling together the entire day is supposed to just sit back and let her wedding happen around her.

I’ve been to a few weddings where the bride has been handed the microphone at the end of the night, and had a chance to say her thank yous to a room full of inebriated guests, who most likely won’t all remember it the next day. But in my opinion that falls a little short of the mark, when you’ve sat and heard all about the couple’s characters, lives, histories and you haven’t heard a woman speak all day then surely half of the story is missing? And so I decided that I would speak at our wedding.

In the run up to the wedding our Best Man was teased mercilessly about his speech and how nervous he would be in front of 200 guests, the sole question Matt was asked about our wedding was how his speech was coming along, but as the bride I didn’t have a single question about whether or not I would say a few words. This was perfect, I had the chance to sit and reflect on what I wanted to say, how I wanted to say it, how long I wanted to speak for and all without an ounce of pressure from the outside world. Without a rule book or guidelines for what a bride’s speech ‘should’ entail I had the freedom to find my voice and write a short speech that came straight from the heart without any expectations.

Now, for someone who loves talking, I don’t actually enjoy speaking in public. Whenever I have presentations at work I go red in the face, my body temperature soars and my palms get clammy. So despite wanting to have my say it didn’t mean that I wasn’t nervous about doing so, and so I came up with a plan. The wedding planner and I knew when I would speak, but it wasn’t written in any orders of service, and I knew that at any point I could change my mind if I felt too nervous. And so the big day got underway, we had our civil ceremony, our Jewish blessing, the reception and the photographs, the Israeli dancing, my father’s speech, we’d worked the room saying hello to guests and my speech had well and truly gone to the back of my mind. The wedding planner came up to me and asked if I wanted to speak, and I genuinely couldn’t think of a good enough reason not to, so I said yes. So I went to pick up my bag to have a read through my notes, realised that of course as I bride I didn’t have one, and I’d left my speech at home… 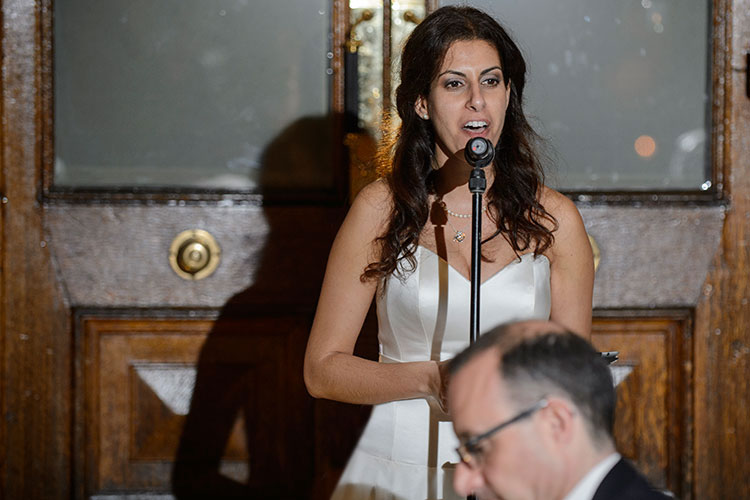 And so I stood up in front of a room of 220 people, without a single note, and spoke from the heart. Instead of panicking I realised that this really was my opportunity to tell our friends and family how thankful I was for them being there, how blown away we were by their generosity, how I could thank Matt’s parents and brother for welcoming me into their family, and my parents for giving me everything I could ever ask for in life. But more importantly I could stand up in front of our nearest and dearest and try to put into words how happy I was to be marrying the man that I am so head over heels in love with. I found something very special when I met Matt, a man who loves to talk just as much as I do. Over the years we’ve been asked countless times what happens when we go home? Who speaks? How do we get a word in edgeways? And, as I told everyone that day, he is the only person that I can sit in silence with… unless, of course, I’m in a white dress and it’s our wedding day!

There has recently been a change in the tide and it seems that more and more brides are speaking on their big day, perhaps it is because women are getting married a little later at an average age of 33.8 and are now more confident and used to speaking in public that it doesn’t seem quite so daunting. I know that I’m not alone in speaking on my big day, and that the lovely Karen from Smashing The Glass  spoke at her wedding. So fingers crossed that the days of the mute bride are well and truly behind us. Deciding to speak on my wedding day was one of the best things I did, and I would heartily encourage other brides to not be shy and speak out! Did you speak at your wedding, or did it not cross your mind as it isn’t the norm? Or did you get cold feet on the day and not go ahead with it in the end? I’d love to hear your stories about when/where/how you spoke, and whether you felt like it made a difference to your wedding day.

Lucy Jenkins is a television publicist living in London. After months of planning and throwing out the rule book she had a ‘Jew-ish’ wedding in October this year.