Simon + Nik, the Grooms: We met 12 years ago in Heaven nightclub, believe it or not. We both knew then that we’d end up together at some point. It took a while, but we got there eventually!

Choosing a Sunbeam Studios as our wedding venue

We chose to have our wedding at Sunbeam Studios. Simon had done a few fashion shoots there in the past, but never considered it for a the wedding until we saw it on a few venue sites. It ended up being perfect as it’s all black and white, which was the trigger for our colour theme.

A black and white theme

Our invitation stated that all guests wear their ‘finest black and white’. It was very modern and chic, and as it was in a photographic studio, we had a huge white backdrop to play with. The DJ was in front of it, and behind him, we had old black and white movies playing throughout the party. We also had couches in the three little dens that ran along one wall of the venue, and we had moustache cushions, echoing our wedding logo (see below) and more black and white cushions with our initials on.

We did something really different for our invitation, so we designed a white cotton napkin printed in black writing with our wedding logo in the middle (two moustaches, joined together with a heart). We wanted something different and special. Simon’s sister used it as a pocket square! 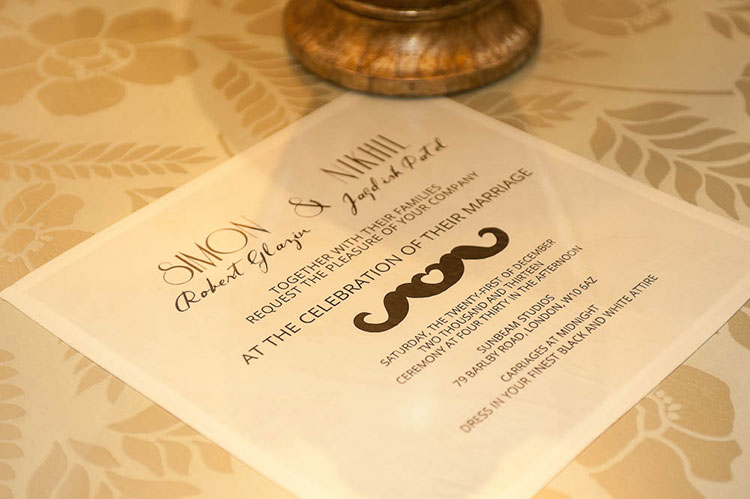 Both our suits were black and white… obviously! Simon’s was by Versace, a runway piece. It was black with gold buttons and had white embroidered shapes running down each arm. His shoes were Christian Louboutin, and studded all over. Nik’s suit was by Vivienne Westwood and was big, blown up black and white check, over the jacket and trousers. His shoes were Valentino.

As it was a civil partnership there wasn’t much we could change, but we wrote our own vows which was amazing. They whole thing was amazing, and quite an out of body experience! Simon had two of his best girlfriends as bridesmaids who wore black and white trouser suits, and his four-year-old nephew, Cooper, was paige boy, walking down the aisle before them to a round of applause.

We didn’t have a chuppah, but we chose to smash a glass after the ceremony and Simon’s mother recited the wedding prayer in English to us. Two of Nik’s friends, who are musical theatre trained, sang during the signing of the ketubah, with the harp playing in the background.

Music for the ceremony — a harpist playing Beyoncà©

We had a harpist who played during the ceremony. We walked down to her playing Beyoncà©’s Halo, which was beautiful. She was meant to play Beyoncà©’s Crazy In Love as our recession song, but somehow someone got it wrong and played the actual song, which was hilarious and very camp. It got a big laugh.

Striking florals that perfectly echoed our black and white theme

We worked with Wild About Flowers and Leanne was brilliant. We didn’t have bouquets or button holes, but we had massive black vases with sprayed white twigs and white orchids glued on, two for the ceremony and two for the main hall. Then on the tables, we had square ice vases which had black Cala lilies weaved through the ice. And on all the window sills we had different black and white vases with white twigs and orchids.

We couldn’t have been happier with our videographer and photographer…

We were recommended Denis at Deneemotion for our videography and after we saw his previous wedding videos we fell in love with his style. We didn’t want anything too cheesy, so he was perfect. It was exactly what we were after.

A lot of friends (and my sister) had used Pascal at Reportage By, so we were familiar with his amazing work. Again, we didn’t want anything too posed and cheesy, so we sat down with Pascal and discussed everything. Pascal and his team really go above and beyond to get amazing pictures, like taking us to the Versace shop on Sloane Street and Vivienne Westwood on Conduit Street after the party at midnight to take more pictures. Absolutely amazing!

The cake was a big thing for us, we really wanted a statement cake. Choccywoccydoodah designed and made it and it was quite the spectacle! It had four layers, each with a different filling (ginger, lemon, sponge and chocolate). The creativity was unbelievable — we had a chocolate model of our dog, Dhillon, on the bottom, with a big black top hat on the top, a black glitter heart in the middle, the Vivienne Westwood and Versace logos made from chocolate over it and our double moustache logo too, as well as black roses. It was truly amazing. 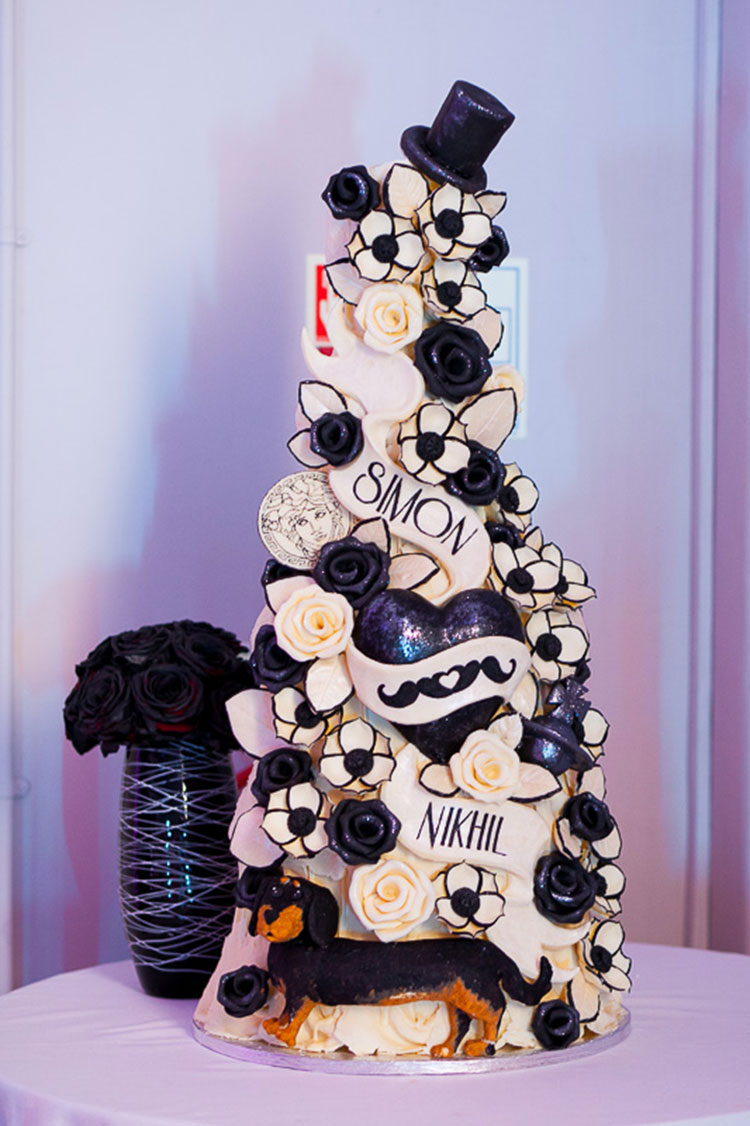 Carole Sobell did the catering. We didn’t have a sit down meal, they created food stations around the venue, and each one a different type of food.

A DJ, a drummer, a violin player, and a live singer

We had an amazing DJ, Kwame Knight from Accelerate Productions, who worked in conjunction with a fantastic drummer and violin player. It was amazing, they played along to the tracks K, the DJ, played. We also had singer Laura White perform a set for us, which was magical, and our first dance was Paloma Faith’s Never Tear Us Apart.

A surprise song in the speeches

Nik, who trained in musical theatre, surprised Simon by singing to him in their speech together. He sang Paloma Faith’s ‘Just Be’. Some guests still talk about this bit! Both our mothers did the welcoming speech, which was really lovely.

We had a wedding planner, Katy Cresner, who helped with the last few bits of the wedding and ran the evening. She was a total God send!

Unfortunately, there’s no tips on how not to stress out, because usually it’s inevitable that there will be some stressful moments. But we made sure we took ten minutes out of the party to just be together and take it all in.