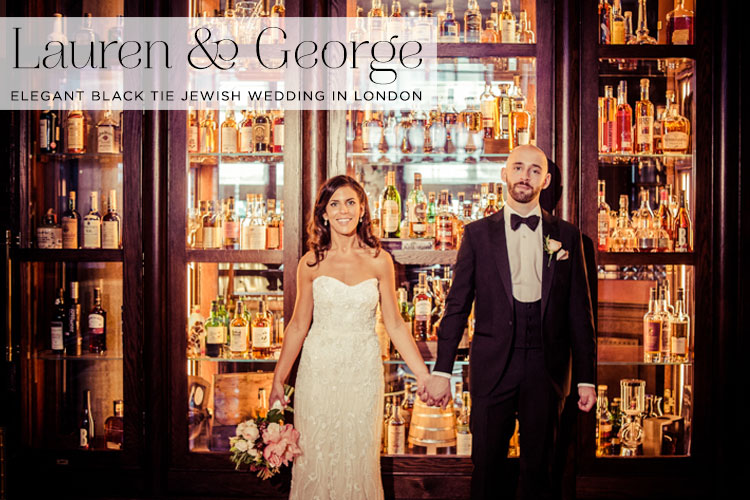 Oh. My. word. This wedding is beautiful. It is classy. It is elegant. It is so super sleek. We’re talking the most stunning of neutral shades for bridesmaid dresses, the most glorious blush-coloured Monique Lhuillier gown, beautiful stationery and one of the most exquisite chuppahs I’ve ever seen, decked out in an abundance of gorgeous florals as well as mini pineapples… yes, really!

That chuppah (by the phenomenally talented Liz from Funky Flowers)  really does take my breath away, and beneath it, Lauren and George look so elegant and lost in the moment, despite all of the peering eyes…

Photographer Blake Ezra Photography has captured the mood perfectly with his romantic and dreamy shots. Blake is one of our much-loved Smashing Suppliers so can always be relied upon for beautiful images.

Lauren, the Bride: It’s January 19th 2014 at The Gym West Hampstead. I’m stretching on the mats and George and I make eye contact in the mirror. He had such a familiar face but I couldn’t work out why. That evening I received a Facebook message from him saying he’d seen me in the gym, he was living in London now and how was I? I couldn’t work out who he was at all. My flatmate at the time was Mancunian and was a mutual friend on Facebook — she told me ‘oh that’s just George from Manchester’. Very unhelpful. Eventually after an hour of Facebook detective work I remembered him. We’d met for an hour, eight or nine years ago in Manchester when I was at Uni and he was at Law School. He’d given me a lift home from a night out (I was dating a friend of his at the time). The Facebook conversation continued. We met for lunch a couple of days later, and were engaged 7 months after that on my birthday! 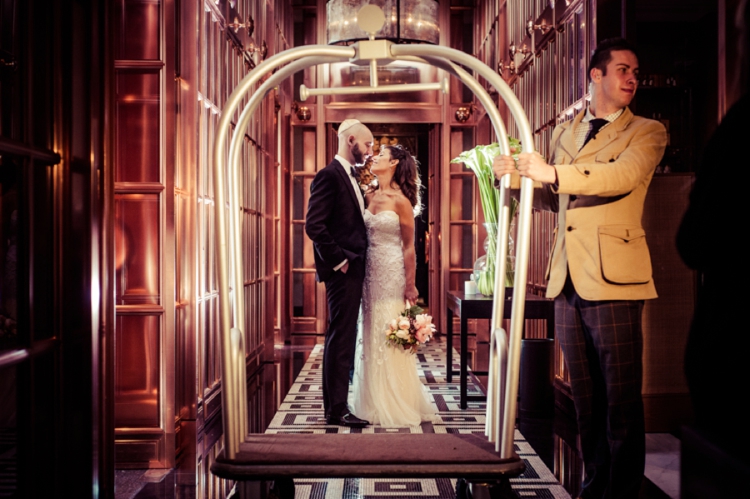 We got married at Rosewood London in central London. It was the first venue I looked at and I immediately fell in love with its laid back elegance and quirkiness.

I wanted a gold theme and George wanted a basketball theme! We quickly agreed neither would win. I wanted the atmosphere to be warm and glowing, so we went with soft neutral shades. All the colour came from the flowers which tied everything together beautifully. We didn’t have a specific wedding planner, but our caterer was very helpful with putting us in touch with contacts and organising things in the run up to the big day. 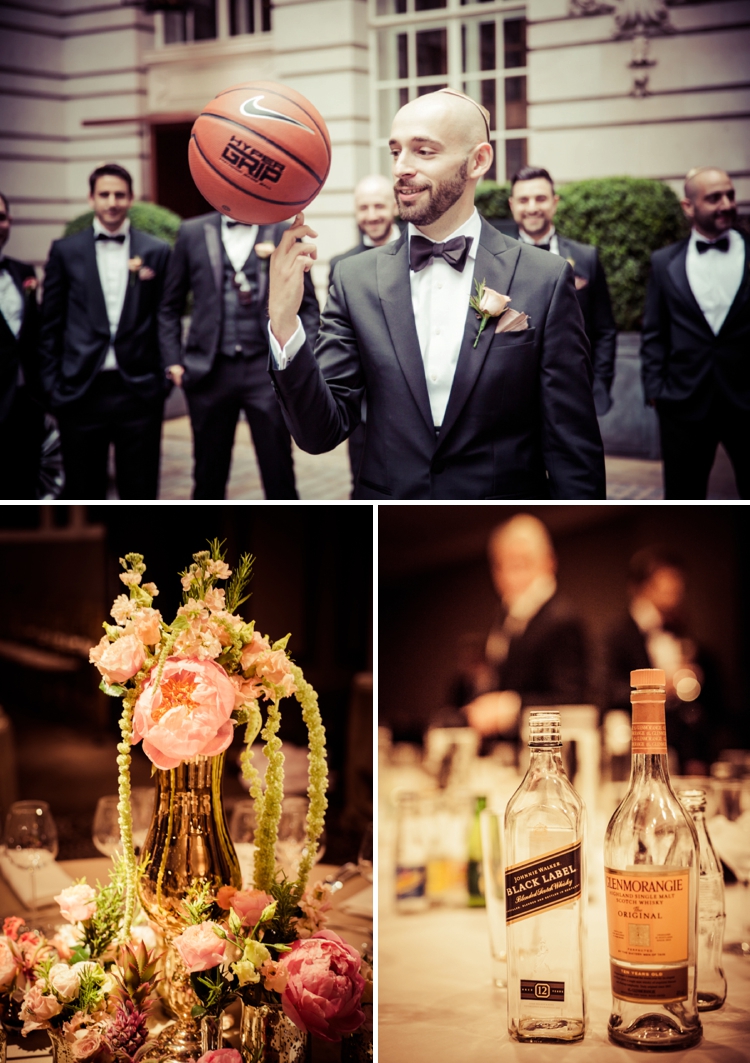 The invitation was very personal. I had a really specific vision for what I wanted, having spent weeks eagerly searching Pinterest for inspiration. Coming from an artistic background, I knew I wanted the stationary to look ‘hand made’, and I wanted it to feature watercolour and gold foiling. A good friend of ours who is a Graphic Designer brought all my ideas to life and created an incredible invitation. 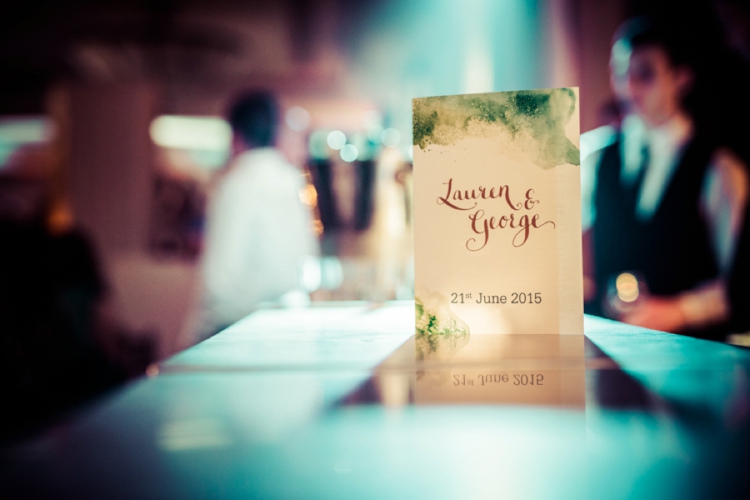 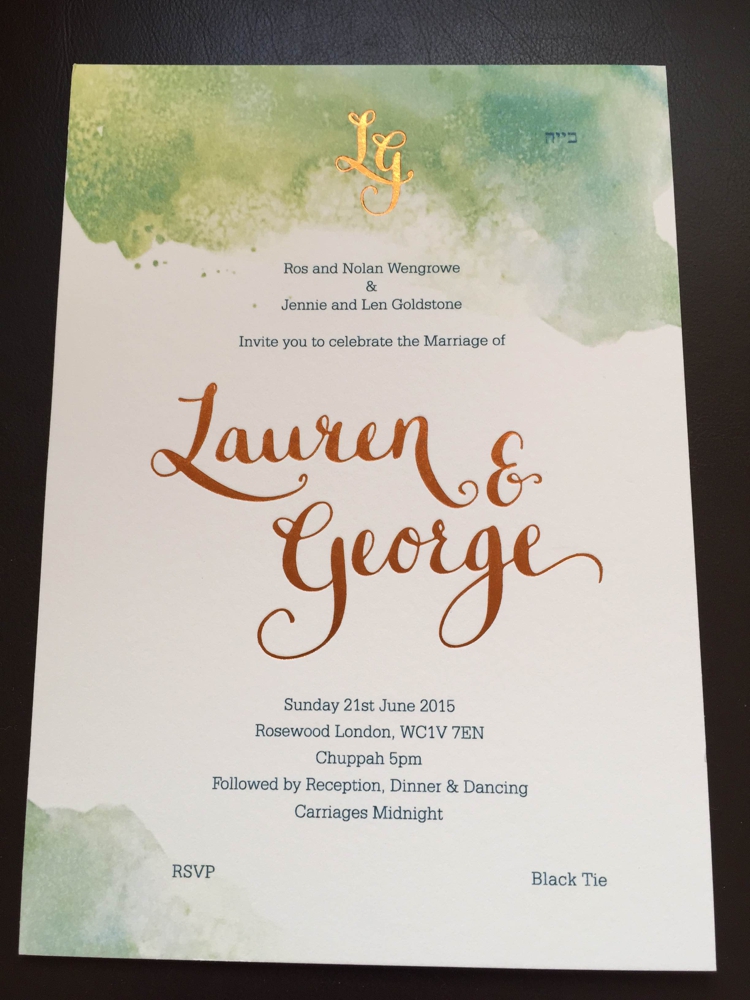 I was so lucky – I had the ultimate dream team for my hair and makeup. Nikki Wolff did my make up and Lara Zee my hair. I found Nikki on Instagram and loved her work, she then introduced me to Lara. 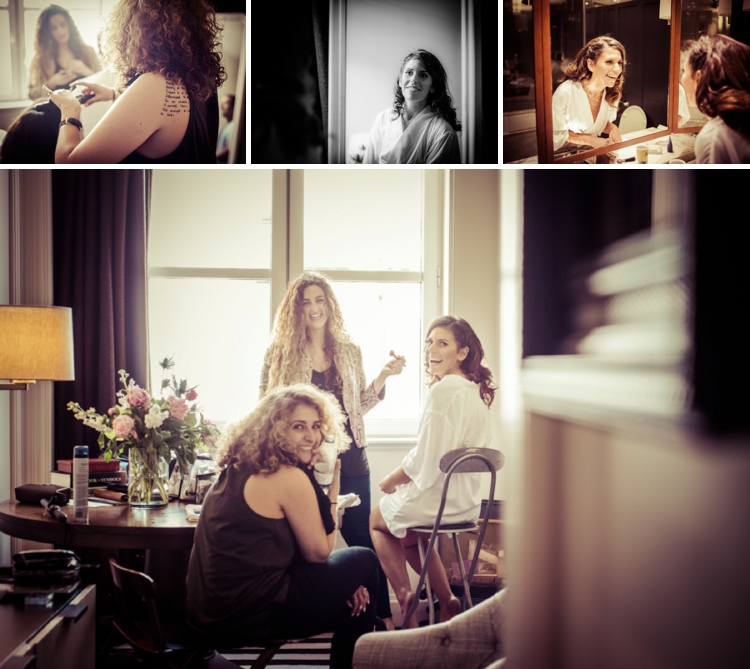 My dress was Monique Lhuillier from Browns Bride. I am very much a jeans and trainers girl, so I was a bit daunted by the prospect of finding my dream dress. I knew the meringues wouldn’t be for me. It really did happen like people say, I put this one on and I just knew; it was a slim fit all the way down, fully beaded and in ‘blush’, a soft romantic hint of peachy pink in certain lights. Just wow. 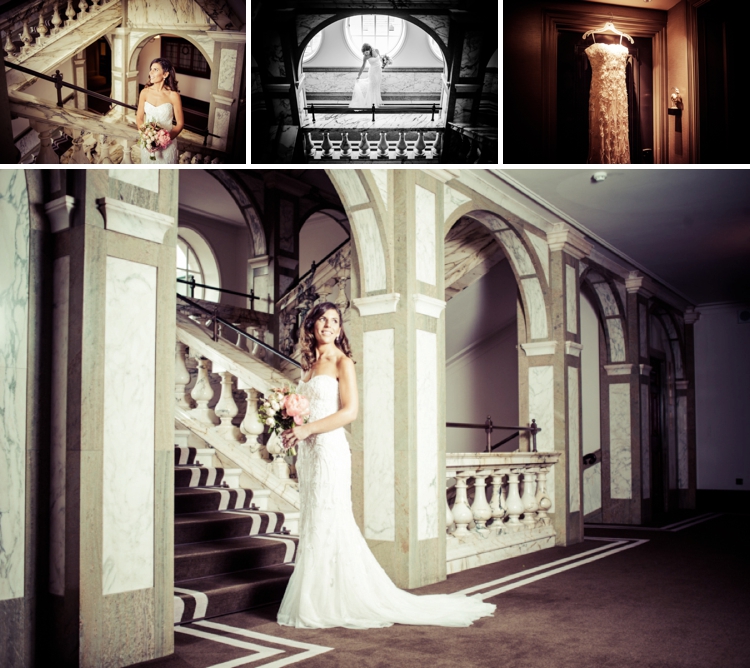 I wasn’t going to be conservative here! I live in trainers so my biggest concern was my staying power in heels.. but I am proud to say that even though I had rose gold Superga trainers under my chair the whole night, I stayed in my gold, sparkly, strappy Jimmy Choo heels right until the end of the night! 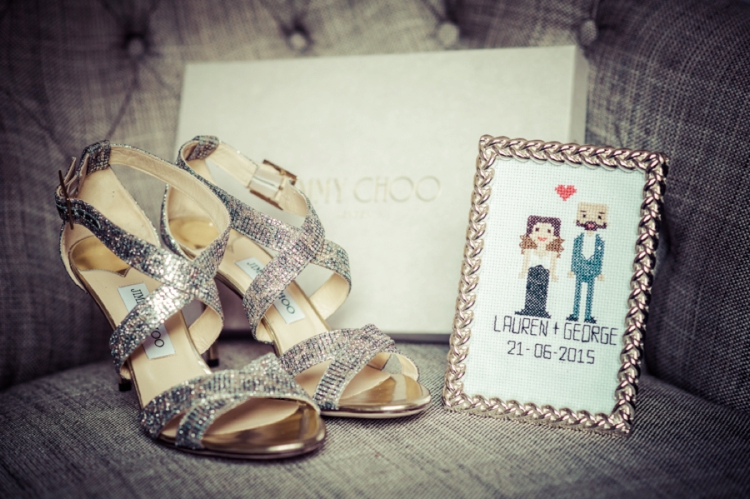 I wore a veil also from Browns Bride. It had a ‘waterfall’ effect and was very simple otherwise. It hung softly down to about my lower back. 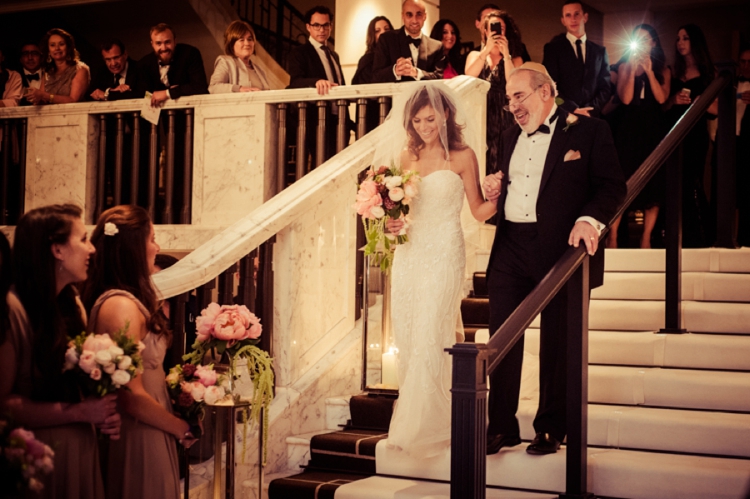 I had five bridesmaids and two flower girls. My bridesmaids all wore multiway wrap dresses from an online store called Willow & Pearl. They were brilliant as the girls wore the same colour but could all choose a style to suit them. The younger teenage bridesmaids had shorter versions and the girls in their 20’s had floor length. They wore flowers in their hair to match the flowers on the chuppah. 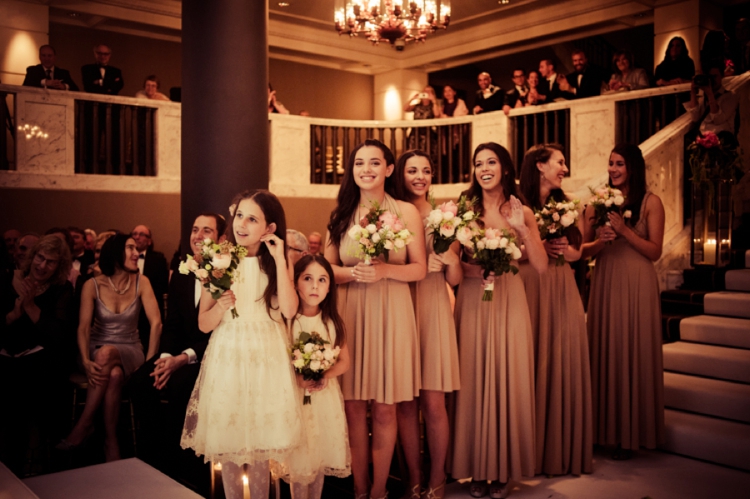 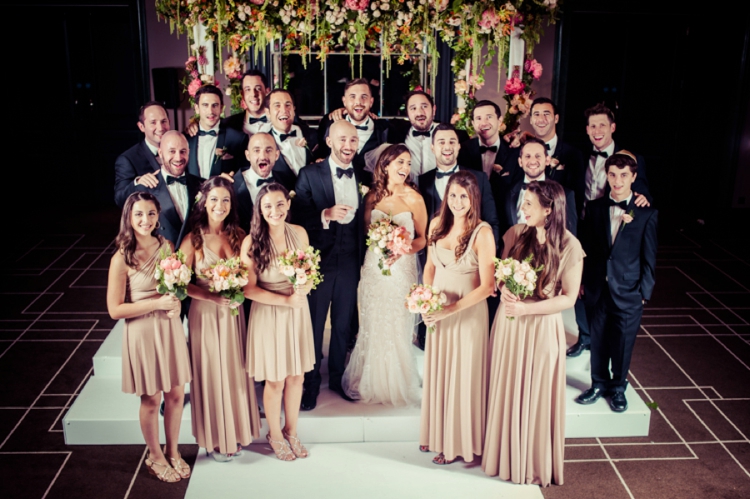 I knew I wanted lots and lots of flowers! I wanted to look to be ‘undone’ and wild, lots of trailing flowers and winding greenery. Liz from Funky Flowers who was in charge of the chuppah design and all the florals was brilliant. Her work was actually breathtaking (I had a hard time concentrating under the chuppah!) 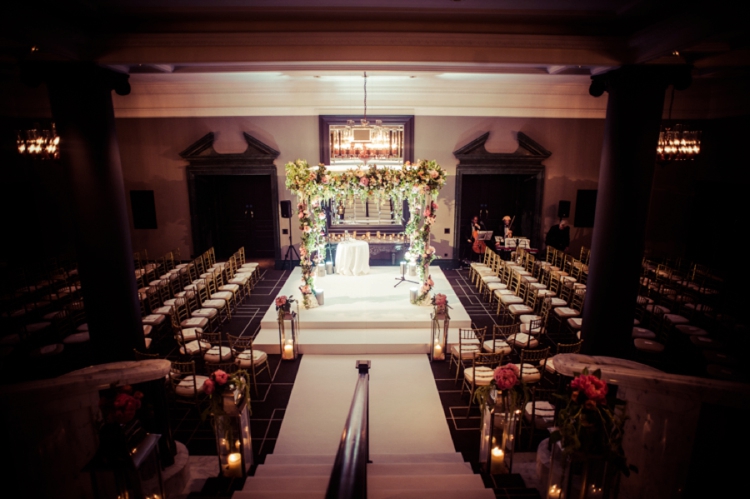 We placed a little ‘for happy tears’ tissue packets on each chair at the chuppah. 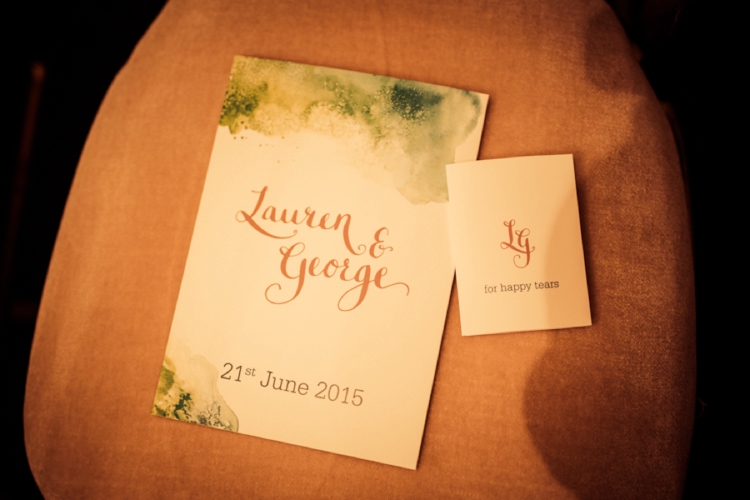 My family are South African and it was very important to my mum to have a chazan sing south African tunes. We had a lovely chazan who sang so beautifully and that was incredibly special. I also had two grandparents under the chuppah with us. George is very close to the Rabbi (Rabbi Moshe Mayerfeld) who married us, they play basketball together and there was brilliant banter during the ceremony. It was incredibly relaxed and personal. It was absolutely magical from start to finish.

Blake Ezra was just a total dream to work with. His photos speak for themselves and George and I both really loved having him there with us on the day. 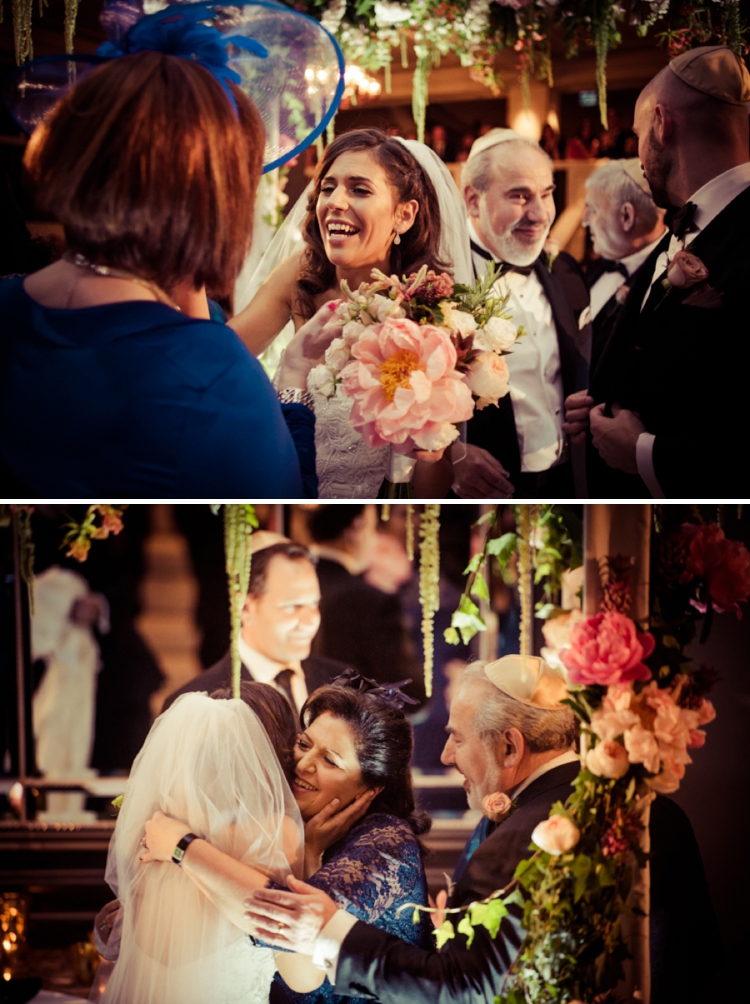 We had the Creation Showband. These guys are incredible. Not only did they sing all the songs we wanted, they did them better than the originals! We couldn’t sit down for two seconds without wanting to get up and dance-their energy was AMAZING!

Our first dance was to Magic by Coldplay. It has somehow become ‘our song’ throughout our relationship and it was really amazing to dance to it at our wedding. 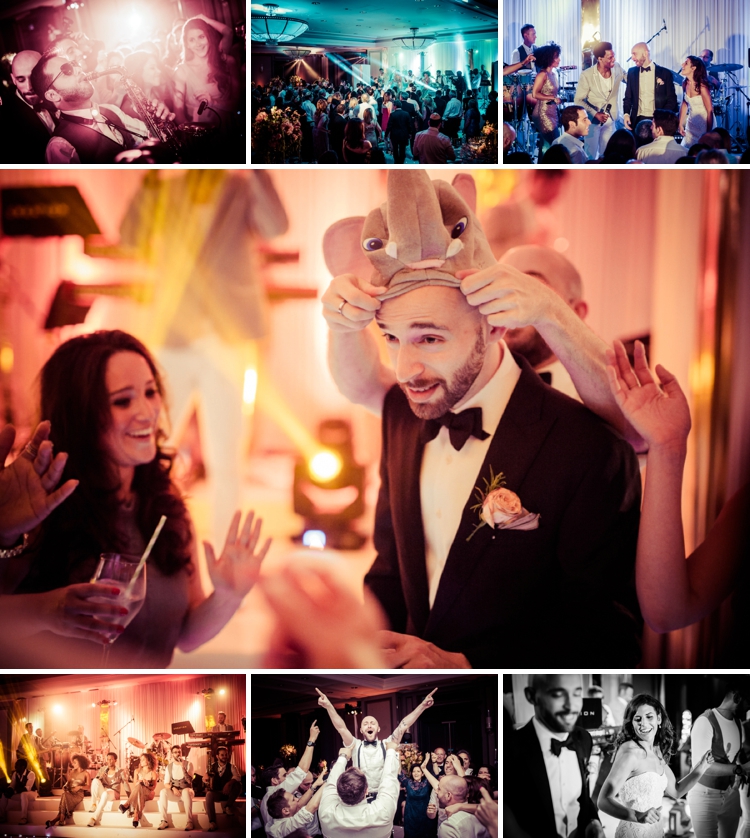 We placed  a large scrap book on a table next to the photo both and every time someone used the booth they stuck a copy of their pictures in the book and wrote us a message! It’s an incredible book of memories for us to have. 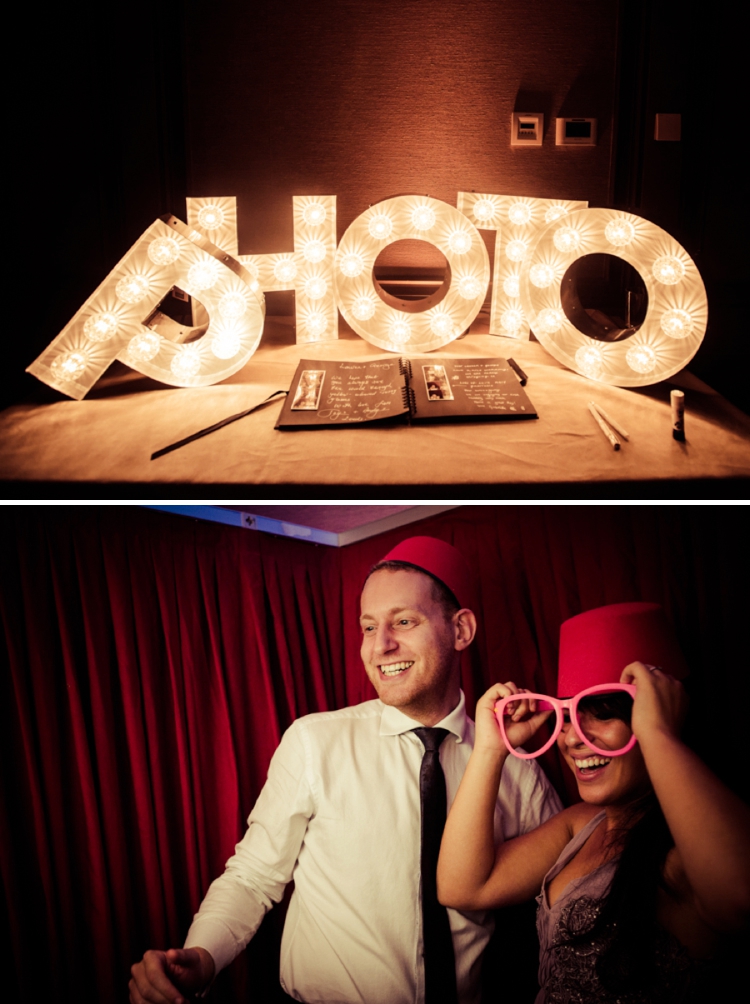 We had very eventful speeches! During my dad’s speech he presented George with a signed basketball vest, then the best man had a good cry during his own speech, and in George’s speech he read out very embarrassing portions of our first ever conversation! 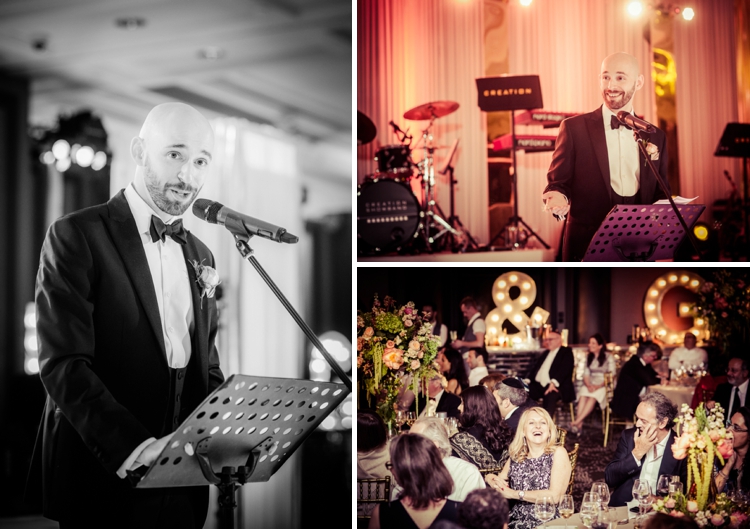 Advice to other brides and grooms

The best advice I can give is really just absorb and enjoy every minute. I know everyone says the same but its true, the day is over in a blink, and then you’ll be wanting it all over again… 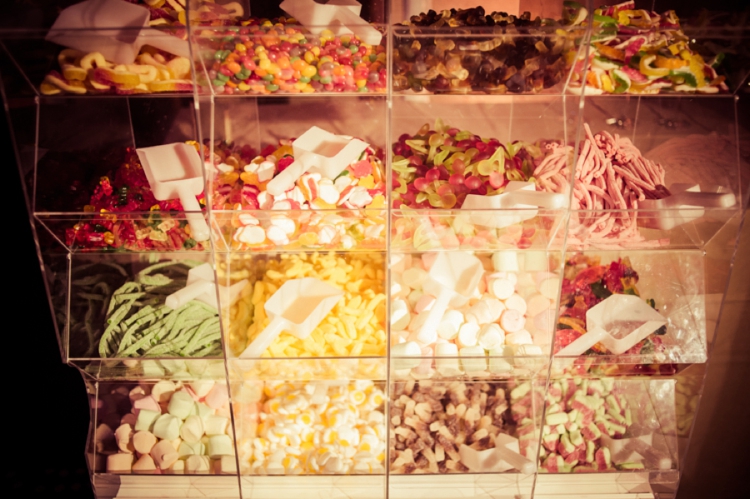