Home > The Magic Of The Veil 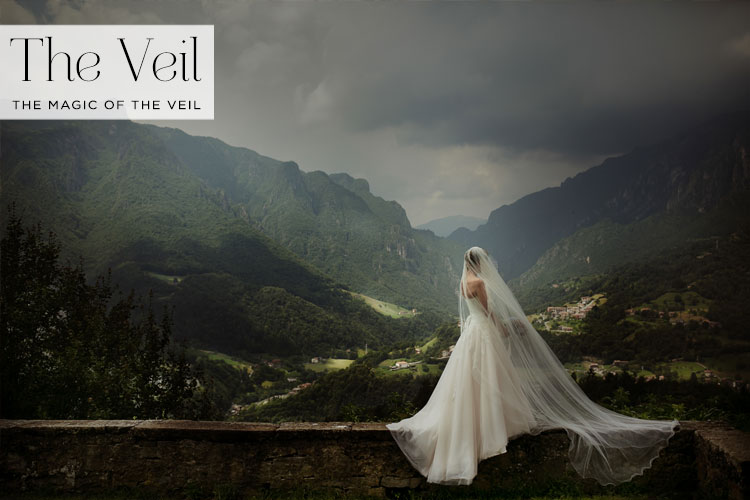 This is a guest post by Amy Schreibman Walter

Growing up, I often watched old black and white romance movies on TV with my Bubbe. We used to swoon together over elegant movie stars in sweeping bridal gowns, their thick eyelashes peeking out from underneath all kinds of veils. The cathedral length veils, the chic birdcage veils, the floaty waltz veils. Oy vey! All the veils!

The first time I fell in love, I dreamed, for the first time, of my own wedding: this fantasy included a little Juliet cap with an opaque drop veil, just like Grace Kelly’s. Wearing whimsical, girly clothes is one way I express my personality, but I’m a feminist, too. Independent, self- sufficient woman that I am, my desire to wear a veil on my wedding day was never about being complicit to an outdated patriarchal notion of marriage. 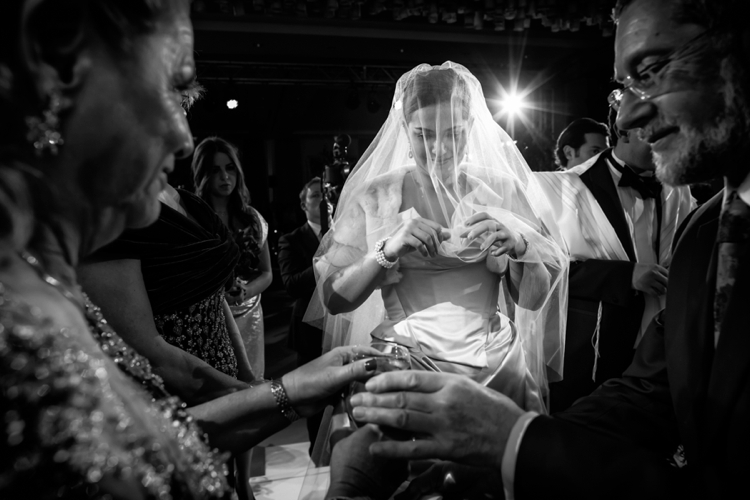 A veil narrative imprinted itself in my psyche during those early days watching movies with my Bubbe, but it was never an antiquated narrative. Rather, the veil has always represented something potent to me: the day I’d wear a veil would be the day where I’d commit to share my life with someone I loved, someone who loved me too.

As I approached my thirties, I began to search in earnest for a life partner. In marriage I’d cease to be a single woman who was always dating the wrong men. I’d become a woman who was committing to one person for a lifetime, a woman who would do everything in her power to make this important relationship last.

After two decades of often disastrous dating, I met my husband when I was 38, and our whirlwind courtship felt a little like magic. Magic requires the right accessories — enter, the veil. 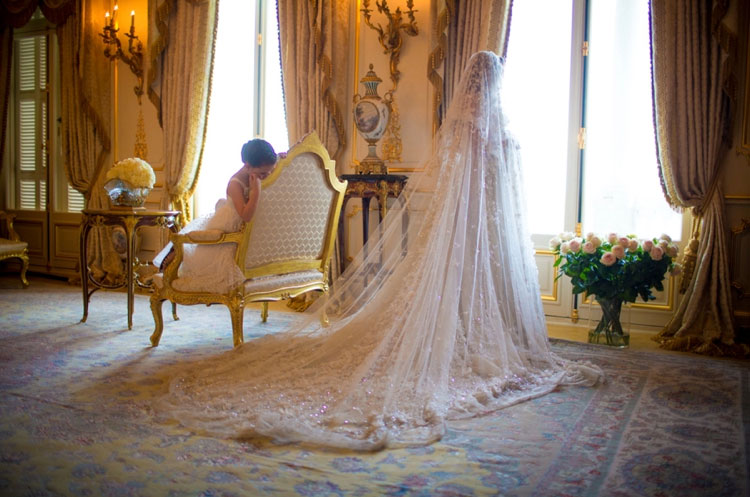 When my Mom first placed my veil on my head, I knew I’d found ‘the one.’ We both welled up a little: it was a version of me that neither of us had ever seen – by its very presence on my head, the veil had transformed me into a bride.

A tiara, a floral hair wreath, even a long white gownâ€Š–â€Šthese aren’t exclusively for brides. But the veil is unique: its placement on my hair was a signifier to mark a day when something was going to happen that would shape my life. 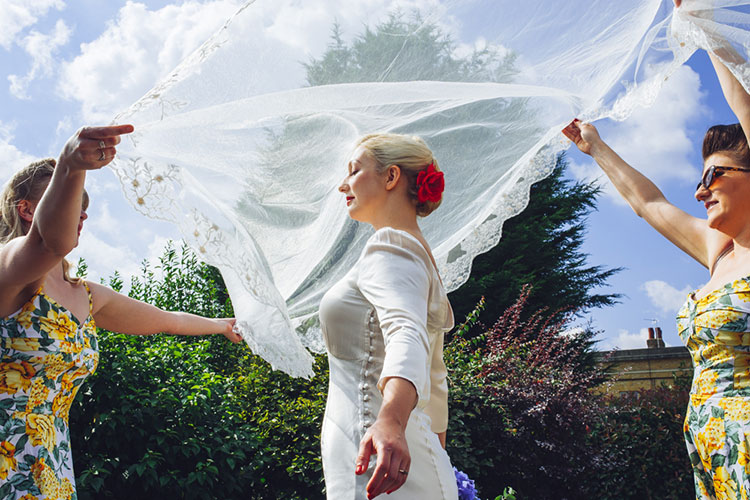 In the Greek and Roman times, brides wore long red or orange veils, called flammeumâ€Šs–â€Š resembling a flame, the veil was supposed to scare off evil spirits. The theatricality of these early veils no doubt set the stage for the show stopping veils of today. This veil was also a way of shielding the bride’s face – most marriages were arranged and it was bad luck for the groom to see the bride before the wedding – his bride would be revealed to him only after the ceremony had been concluded.

Over time, as religious weddings became increasingly popular, the veil was repurposed, becoming a sign of humility and respect before God. The Hollywood movie moment of a groom lifting the veil before kissing his new wife comes from the religious idea that once the bride and groom become husband and wife, only then can they be together in a physical way. 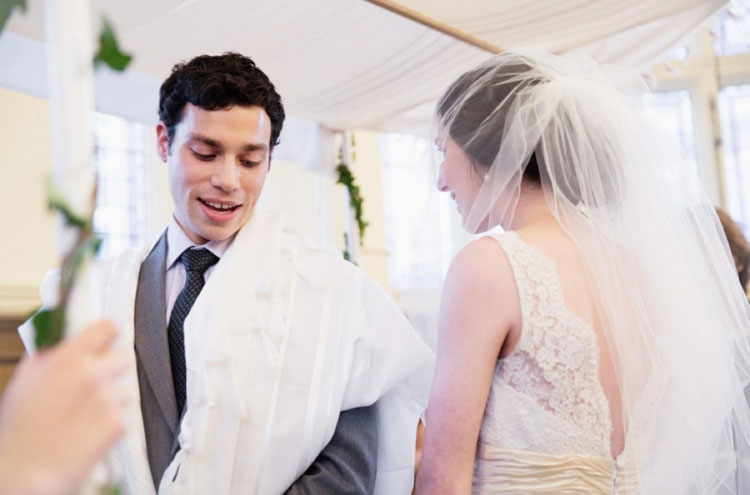 Much of this historical context behind the veil felt irrelevant to me as I was shopping for my veil, out of step with the life I was living. I lived with my fiancà©; we were trying for a baby. Yet despite its historical and cultural baggage, the veil had meaning for me. After twenty years of trying and failing at romantic relationships, something had shifted. Much like my engagement ring and my bridal gown, the veil issued a statement – a new phase was about to begin. 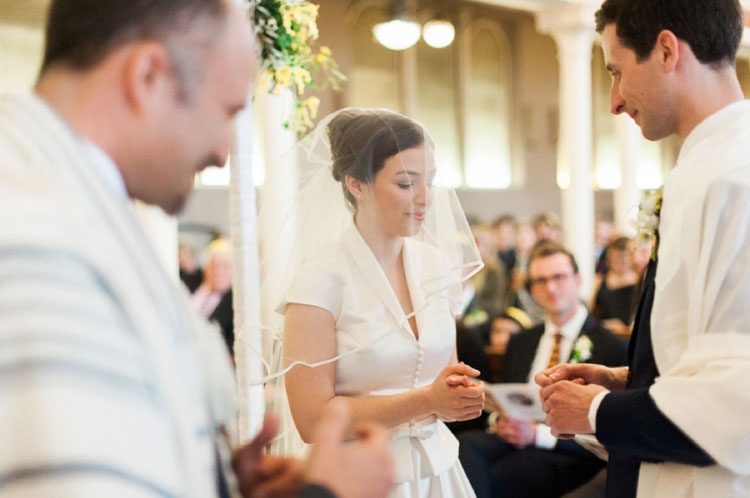 In the Jewish tradition, before the marriage ceremony, the groom takes the time to look at his bride and then he covers her face with a veil (read more about the story from the Old Testament of Jacob, Leah and Rachel and the ritual of the Badeken here). With this act, he’s making a statement — he understands that his soon to be wife’s beauty is under the surface – that, even if her face is hidden beneath a veil, it doesn’t matter — he’s marrying the woman within. Beauty is more than skin deep: this idea of physical beauty being less important than what’s inside feels, to me, like a fitting way to begin a marriage. 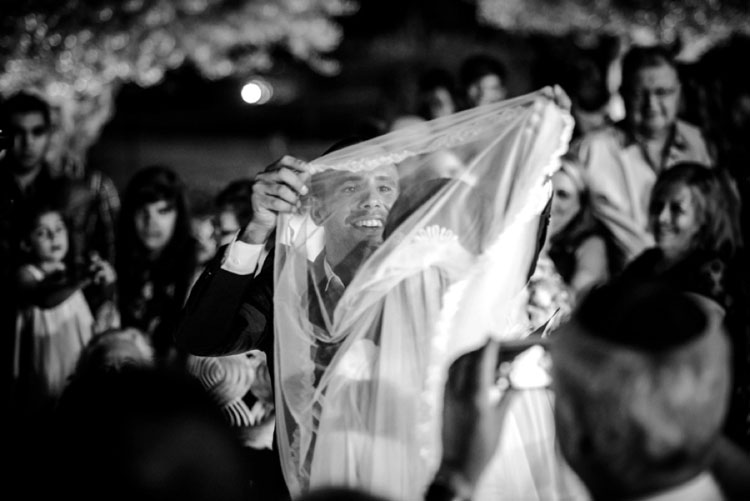 I’ll never forget how intimate the act of my husband placing the veil over my face felt, even as our relatives sat around us watching. I remember the sustained eye contact with him and our smiles and giggles, and also the feeling of being connected with all those who had come before us in the Jewish tradition. 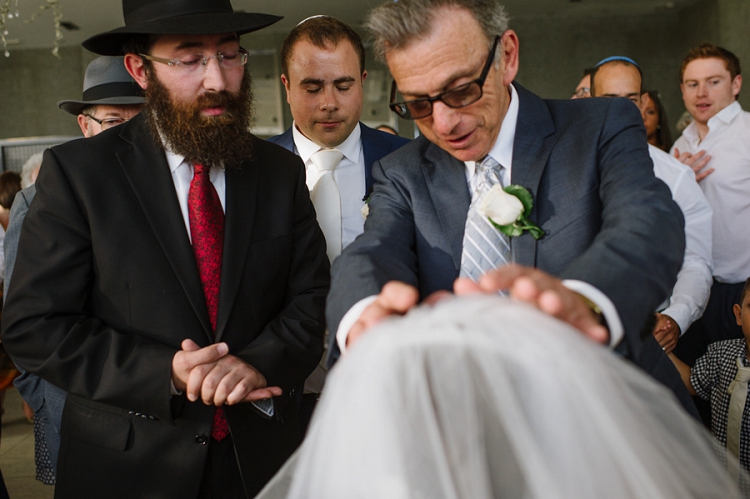 When the bride and groom stand under the chuppah together, they are supposedly in an elevated state of holiness. The feminine aspect of God is said to shine through the Bride’s face on her wedding day – the light she radiates from under the Chuppah is so bright that it must be veiled. Holy moments require a little privacy.

For me, center stage in a packed Shul, the veil felt a little like a protective screen. A wedding feels cinematic in moments, and as the camera was flashing and the videographers were filming, I was grateful for the veil — the garment that allowed me to exchange a few discreet glances with my new husband without anyone watching. 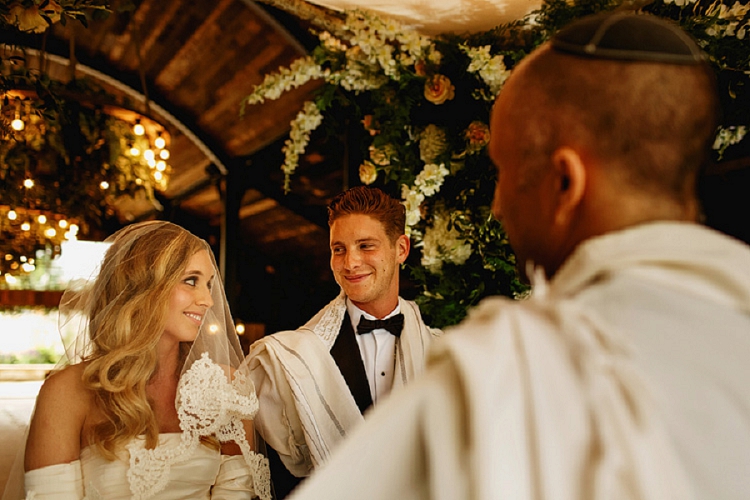 And, of course, the veil is not exclusively for straight women. I once watched two veiled women marry in a Reform synagogue. My feminist Bubbe, very much ahead of her time, would have enjoyed seeing two stunning veils at one wedding, two smiling brides under the Chuppah. 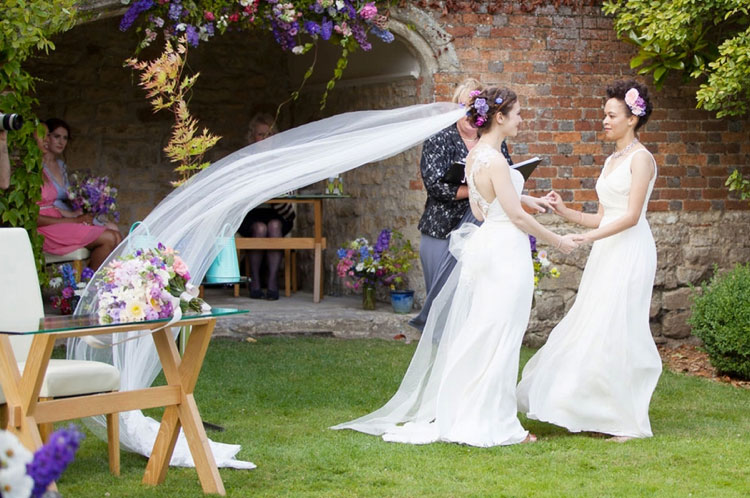 Though I enjoyed the process of shopping for my veil, at times I felt slightly overwhelmed by the selection on offer. The different types of veils sound a little like words from a beautiful unwritten song — birdcage, blusher, cathedral, chapel, double tier, arm length, fingertip, fly away, fountain, mantilla, pouf, ballerina….

From department store veil to off the rack bridal shop veil, to couture veil… there is not just one “right” veil for you. There is only your feeling, your “this is the one and I have to have it” feeling. You’ll know when you put it on (tears — yours or someone else’s – is usually a good indicator). 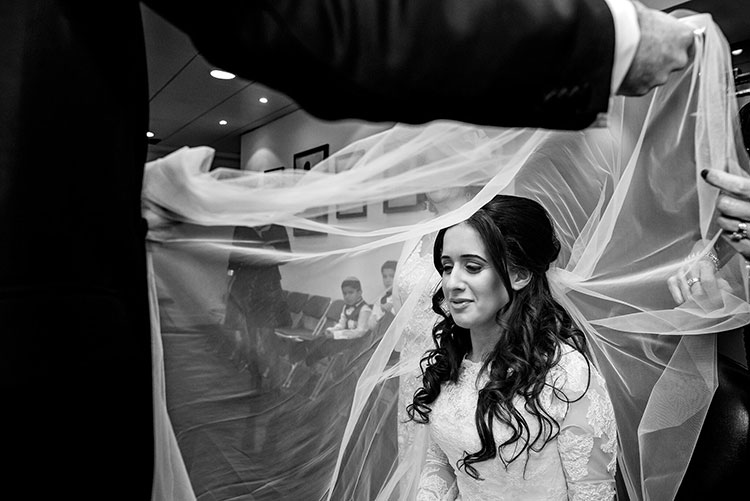 Bring your wedding gown with you when you shop for a veil, and you’ll soon get a sense of which length of veil works for your overall wedding look. Typically, longer veils tend towards tradition and pair well with more conservative gowns, whereas shorter veils tend towards the informal and can lend a retro feel.

On my Pinterest board pre-wedding, I’d saved pictures of Grace Kelly and other brides who wore Juliet cap veils, but once I’d chosen my dress, I realized that the vintage cap veil wouldn’t work – I needed a much more simple veil to complement the intricate embroidery on the top of my dress. I wouldn’t have anticipated that I’d end up choosing a standard fingertip length drop veil, but that’s exactly what happened — you can’t plan these things. 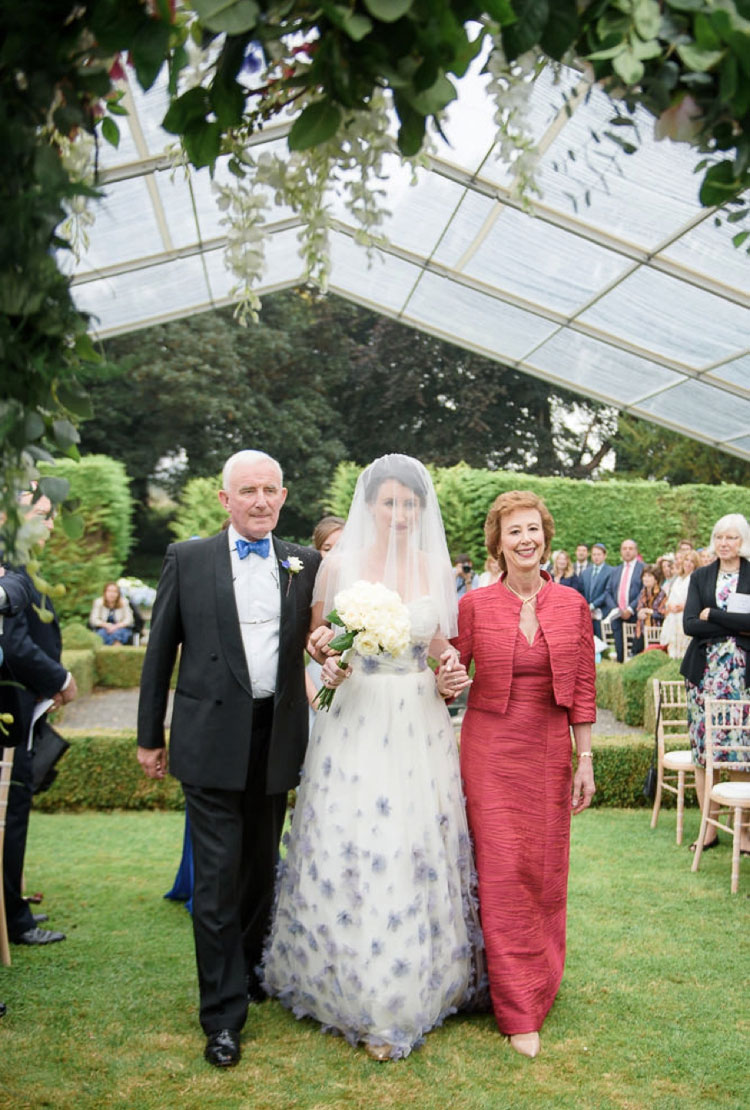 The first time I saw a long rack of bridal veils, I felt a little overawed by the countless, seemingly endless hues of cream, white and ivory. It makes sense to take your dress with you or bring a swatch of the dress fabric so you can efficiently and precisely color match your dress with your veil. With antique veils, though, the pressure to color match is taken off – ‘close enough’ works well with these heirloom veils because they’re unique, they’re supposed to stand out.

Have A Think About Hair

How your wear your hair on your wedding day will influence your decision about which type of veil to go for. I’d thought I wanted an up-do on my wedding day, but I ended up wearing my hair long and straight — a much better compliment to the veil I’d chosen, and to the neckline of my dress. Once you’ve found your veil, it’s a good idea to take it (along with any other hair accessories you plan to wear) to your hair trial appointment so your stylist can experiment with where on your hair to place the veil, and how best to affix it, too. 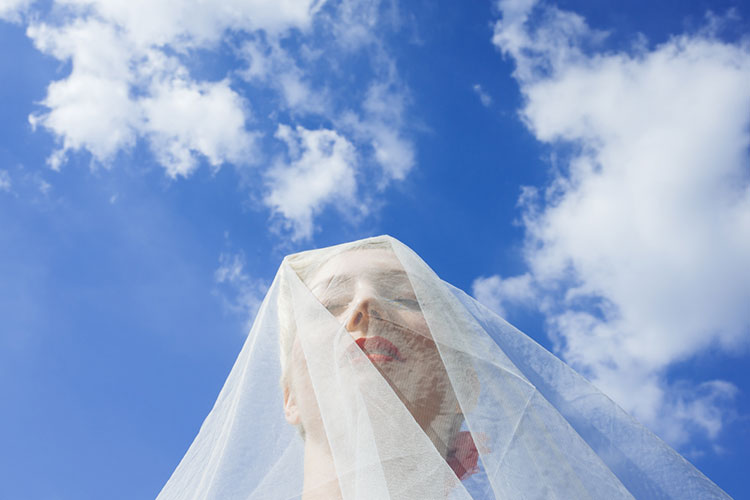 Before I found my veil, I came across a stunning floral wreath headpiece in a vintage shop. It was an ornate wreath of fabric flowers from the 1930’s, and I knew I had to have it. I bought it on the spot and then took it with me when I went veil shopping. If, like I did, you have an accessory in mindâ€Š–â€Ša tiara, headpiece, wreath, cap, feathers, hairclip, etc.â€Š–â€Š take it with you when you look for your veil. 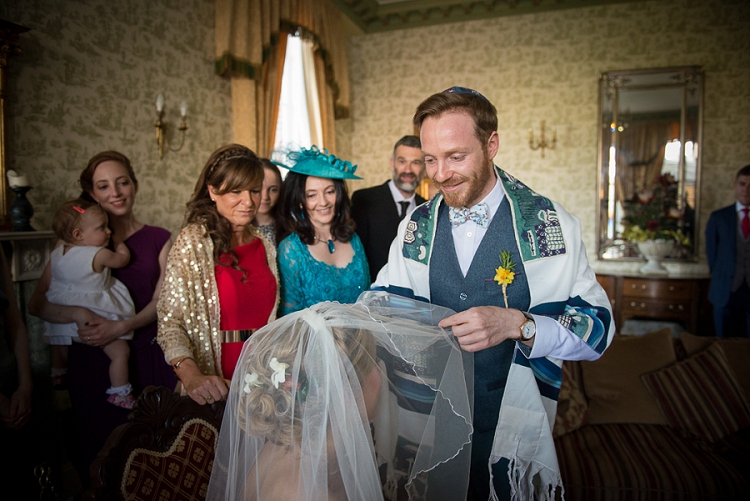 Bring Someone With You

I have fond memories of my time with my Mom in the dressing rooms of various stores, searching for the right veil. Having her by my side helped me to articulate what I was looking for. And, of course, it was wonderful to have someone else to share the tissues with when I found myself getting all misty eyed in the mirror. 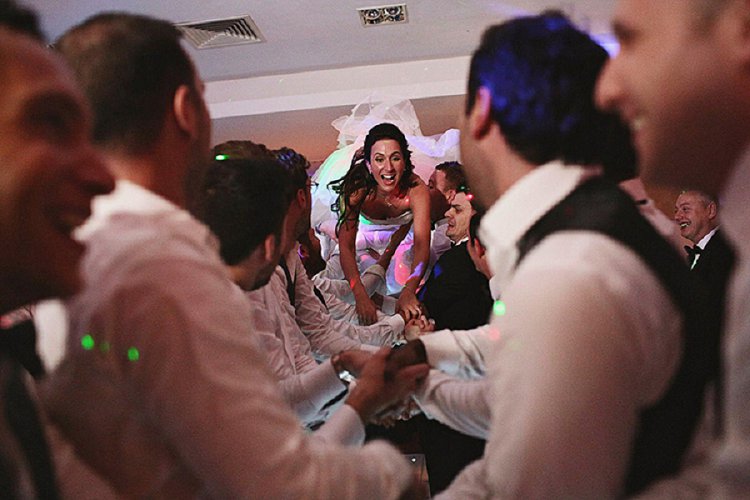 I recall fondly the filmic, flying movement of my veil as it blew in the wind behind me when I stepped out of the wedding car to walk into the synagogue. It was my movie star moment; my Bubbe would surely have swooned if she’d been there. I like to think she was watching from somewhere, tissues in hand, smile on her face.

About the author: Amy Schreibman Walter’s essays and articles have appeared in Kveller, A Practical Wedding, Tablet and The Huffington Post, among others. Her most recent book of poems, Houdini’s Wife and Other Women, is available from Dancing Girl Press. Follow her on Twitter @amyswalter or find her at www.amyschreibmanwalter.com 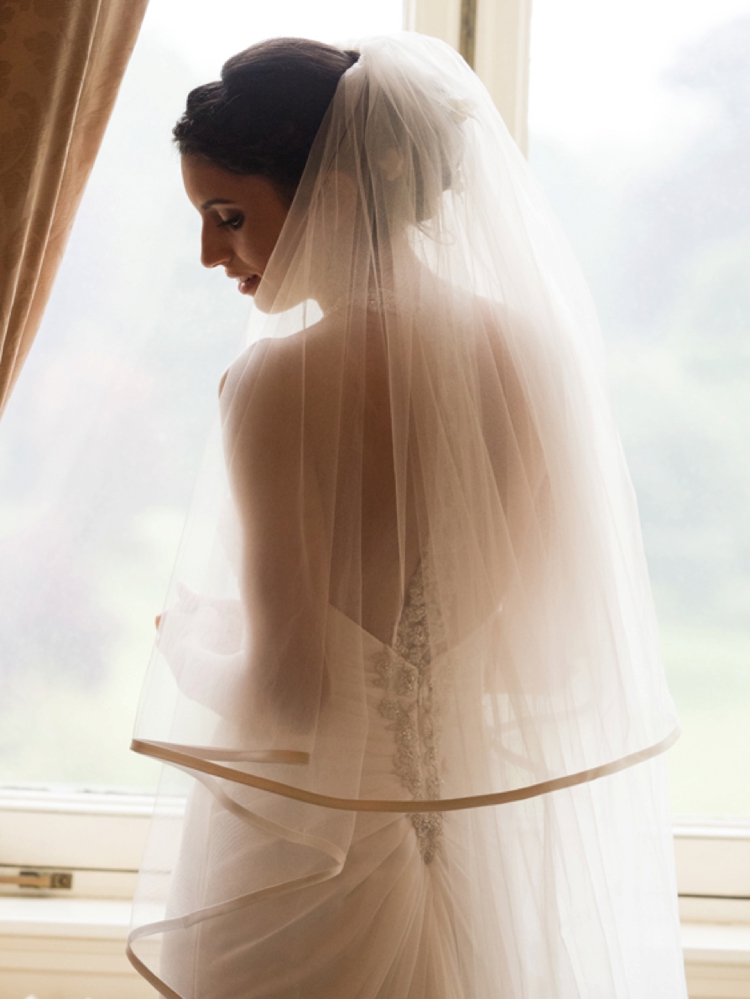