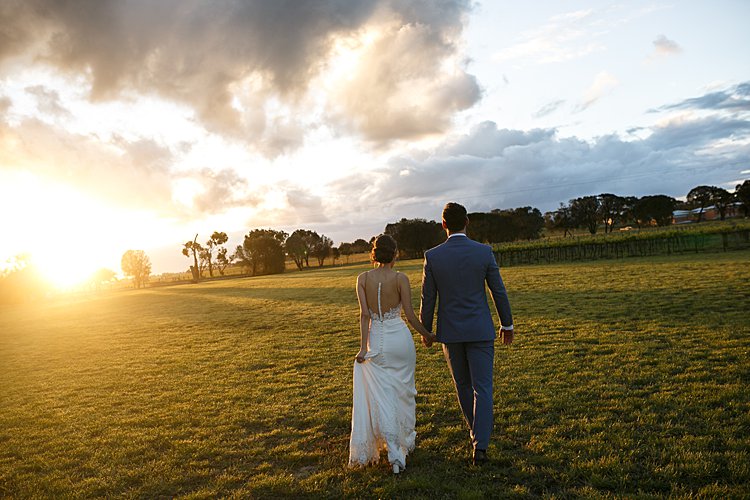 Oh we are positively swoooooning over today’s gorgeous Jewish wedding. Everything from bride Adi’s oh-so-elegant Martina Liana gown to Smashing the Glass Recommended Vendor Jeremy Blode’s artful photographs of the day positively exudes that laid-back Aussie chic we just can’t get enough of….

Adi, a solicitor, and Rod, a physical therapist, placed a premium on creating a beautiful record of their day, and did it ever pay off! Just look at those portraits of the duo walking off into the sunset. *Swoon.* The Jewish dancing shots are pretty unmissable, too. Adi says Jeremy Blode “has a gift for capturing the rawest and most beautiful moments,” and we could not possibly agree more.

To round out the documentation, Adi and Rodney brought in Videoboutique as videographer and Magnet-Me to provide ultra-creative wedding favors in the form of instant photo magnets! Adi loved the idea of a photo booth but wanted to keep her guests on the dancefloor having fun, and what a perfect solution she found. Instead of guests having to queue for a photo booth, a photographer walked around during canapà©s and dancing to snap guests’ photos, which were then printed out instantaneously to be taken home at the end of the night. LOVE!

Now over to Adi… 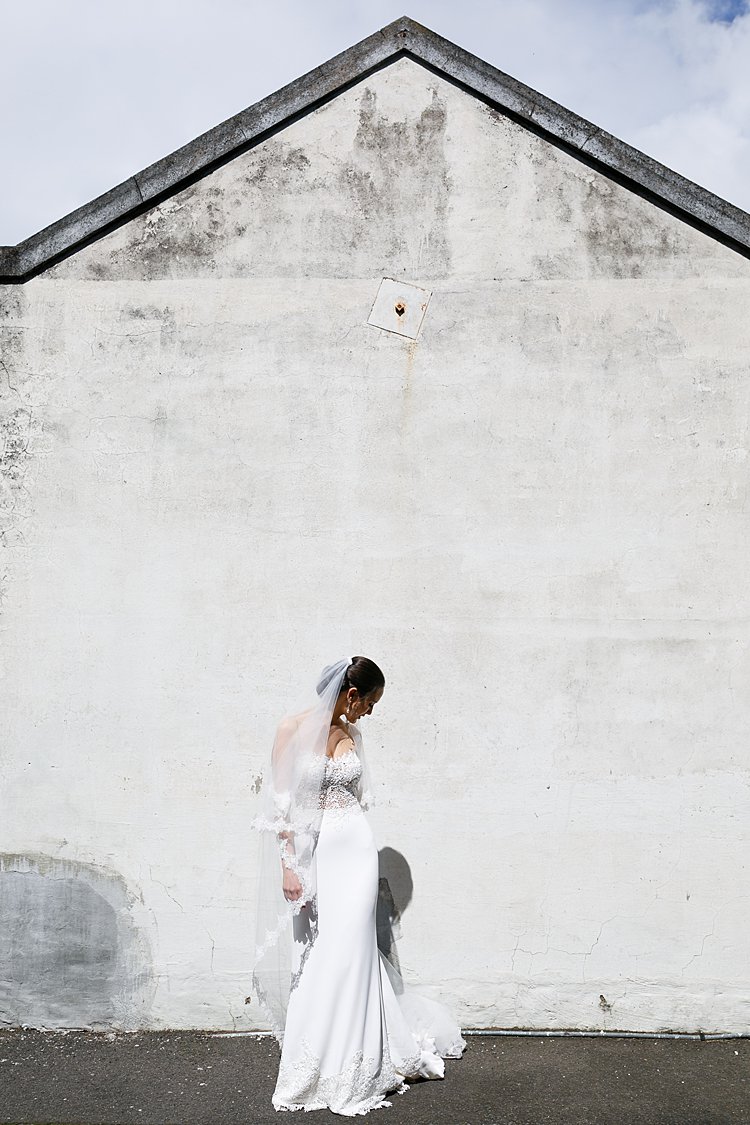 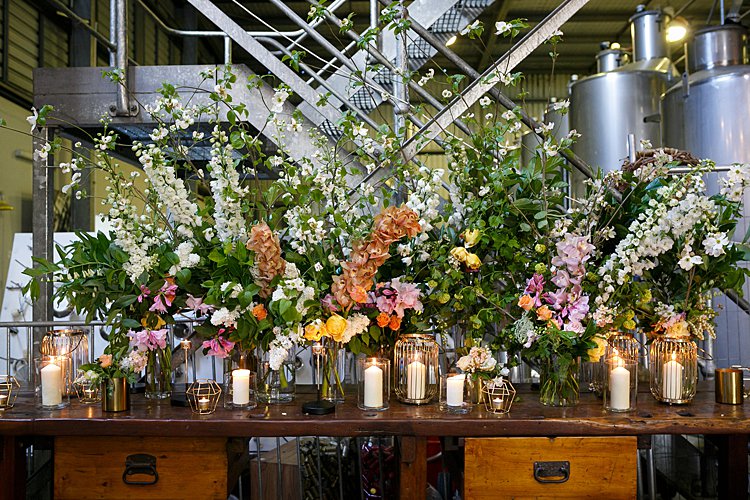 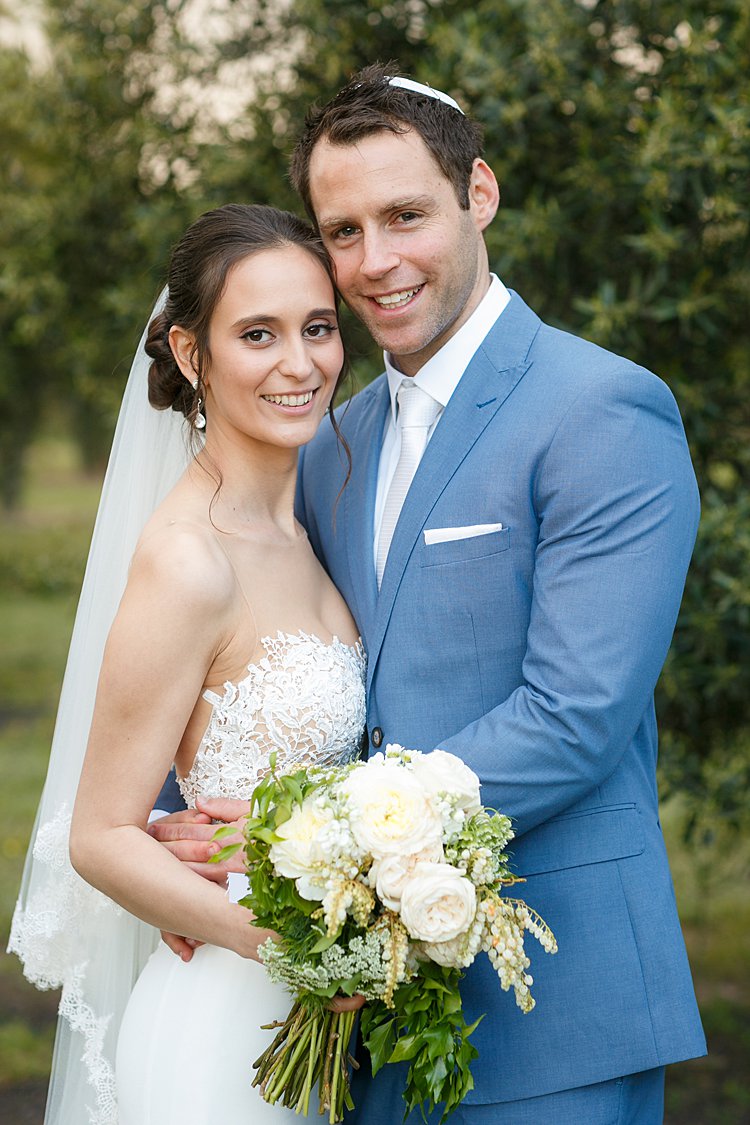 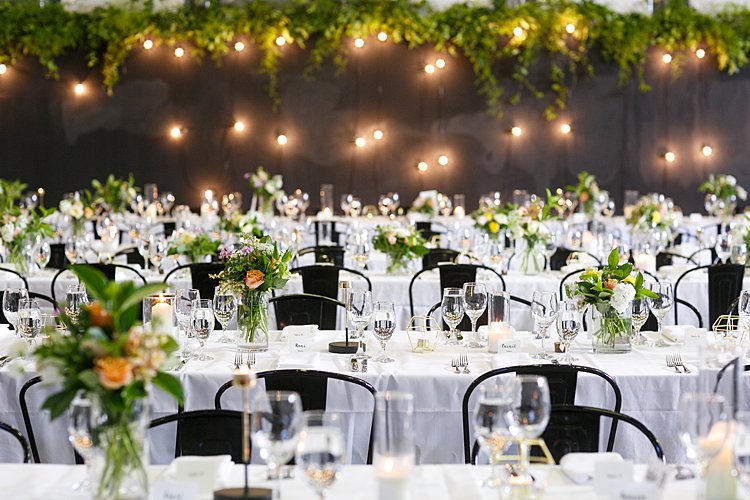 Adi, the bride: Funnily enough, Rod and I first met at a dingy Melbourne nightclub called Boutique. I may need prescription glasses to see almost everything in my day-to-day life; however, I managed to spot Rod (free from glasses) in the loud and dark nightclub. I pulled him out from the crowd and asked for his name and whether he was single. The rest is history.

END_OF_DOCUMENT_TOKEN_TO_BE_REPLACED

You spend so much time and energy coming up with a beautiful chuppah design for your Jewish wedding — isn’t it a shame that it only really features for the duration of the ceremony?

Lindsay, who produces TV commercials, and Ben, a project manager for Google Fiber, thought so. And when you see the photos of their fantastic rose-strewn canopy, by Gia at Cory Ryan Photography, we think you’ll see why.

Loving the symbolism of the chuppah as their“new home,” after the ceremony they set up underneath it so that guests could come talk to them. They even stayed put under the canopy for dinner — such a great way to resolve that mealtime seating dilemma, right?!

Speaking of the meal, we just cannot get over Lindsay and Ben’s Fantastic Mr. Fox-themed wedding cake, inspired by the pair’s favorite movie. The cake topper, naturally, was bride-and-groom foxes, and the bottom layer featured the sweetest quote from the film.

Now over to the bride, who looked smashing in her striped dress by Hayley Paige…

Lindsay, the bride: We were introduced by a mutual friend who years later confided in us that “she didn’t think we would hit it off THIS well.” â€‹

END_OF_DOCUMENT_TOKEN_TO_BE_REPLACED

How many weddings have you been to that have featured a surprise ukulele performance… by the bride?! None, you say? Same here. But Amanda and Adam’s laid-back, ultra-personal day, which included just that, makes us wish we could’ve been there to see it!

We admit we were predisposed to adore this Jewish wedding, since the bride is none other than STG Blogging Bride Amanda, but take a peek at Steven Carter-Hewson’s fantastic photos and Filmmakers of London’s beautiful video of the day and we bet you’ll agree with us that this looks like one fun wedding.

It’s not just the ukulele performance (which even the groom didn’t know about beforehand!) that makes Amanda and Adam’s day stand out, though. Planned entirely by the couple (with a little help from our Facebook community for Jewish and Jew-ish brides and grooms — thanks for the shout-out, Amanda!), keeping things personal and involving friends and family were top goals throughout. And we love some of the touching ways this pair pulled that off — by inviting different guests to give each sheva bracha during the ceremony and having family members hold the poles of their chuppah.

The couple held their ceremony in Braxted Park’s gorgeous orangery and their reception in a marquee looking out on the lovely grounds. The couple wanted to complement their surroundings rather than overwhelm them with dà©cor and not knowing much about flowers, Amanda wanted to make sure she found a florist who could take charge. Smashing The Glass Recommended Vendor Emma Sousa of Urban Flower Farmer was exactly that. Her subtle arrangements focusing on delicate greenery and occasional bursts of soft color, with candles and hurricane jars added to the tabletops for a little extra glam.

Now over to the bride, who looked so elegant in her champagne-colored Mark Lesley dress…

Amanda, the bride: I work in advertising as an account director and Adam works in financial services. We met on holiday in Israel back in June of 2014, so we’re coming up to 4 years together.

END_OF_DOCUMENT_TOKEN_TO_BE_REPLACED 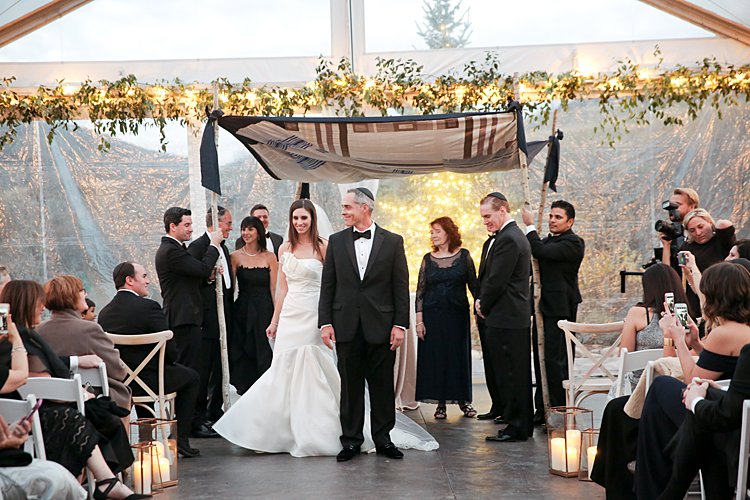 We’re so in love with today’s couple’s ultra-personal chuppah. Lennie and Mark combined ten (yes TEN!) family tallits (prayer shawls), from both sides, to make their fantastic canopy — literally weaving together their two families into a new one! Isn’t that beautiful?

And for the poles, the couple used Aspen branches, in a nod to the natural flora of their destination location, the stunning mountain retreat of Park City, Utah. Check out Pepper Nix‘s gorgeous photos of the ceremony — not to mention the fab party, before and after!

Yep, another thing we adore about Lennie and Mark’s Jewish wedding is their pre-chuppah cocktail hour. The pair made a point of attending and enjoying it fully, and clever bride Lennie even took the smart step of sourcing a special cocktail dress (purchased from BCBG on the sale rack for $100!) so she wouldn’t have to worry about anything spilling on her gown. The cocktail dress came in handy again when the bustle on Lennie’s modern, chic Martina Liana gown broke during a very energetic hora!

Oh, and one last detail we can’t get enough of: this pair seriously mixed up the standard hotel welcome bag formula, injecting some serious personality into your regular selection of snacks and water bottles: since Lennie is a dentist and Mark is a gastroenterologist, the goodies they handed out included monogrammed toothbrushes and reflux meds! Now over to Lennie… 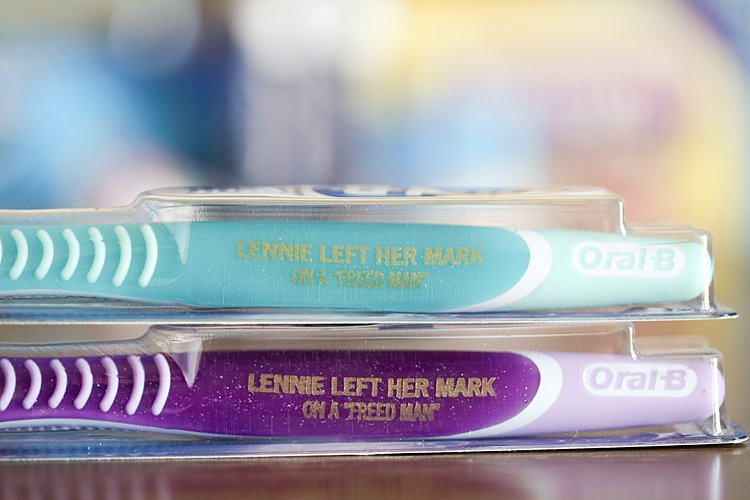 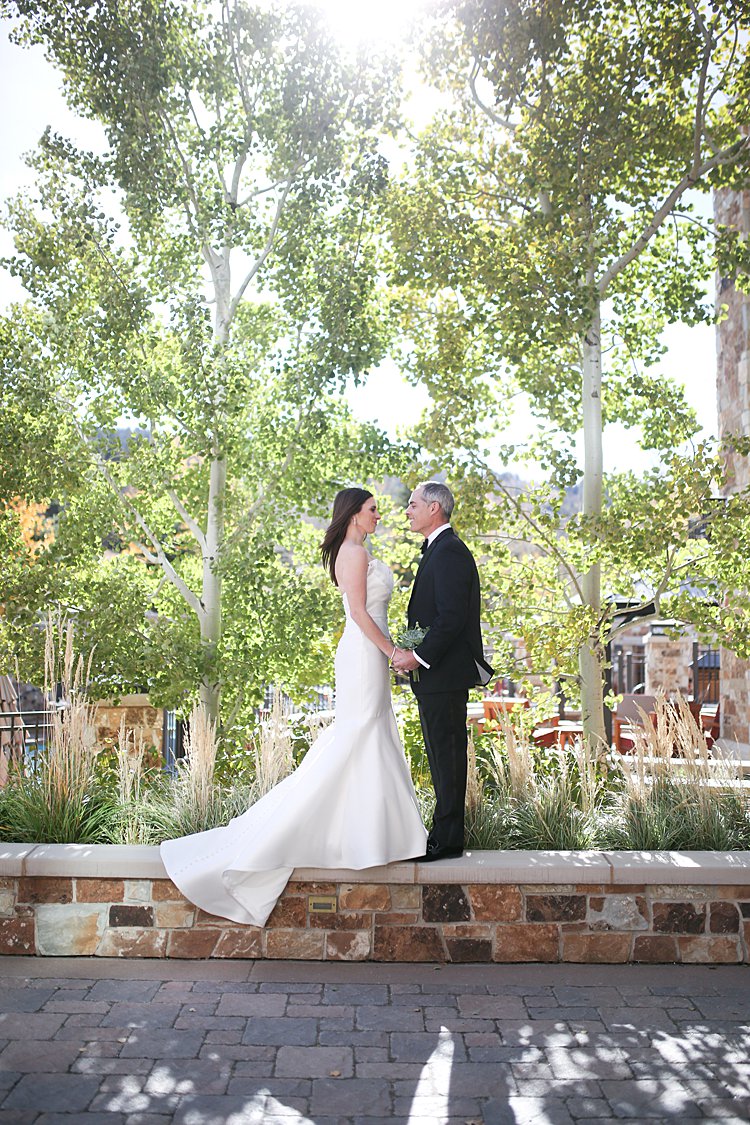 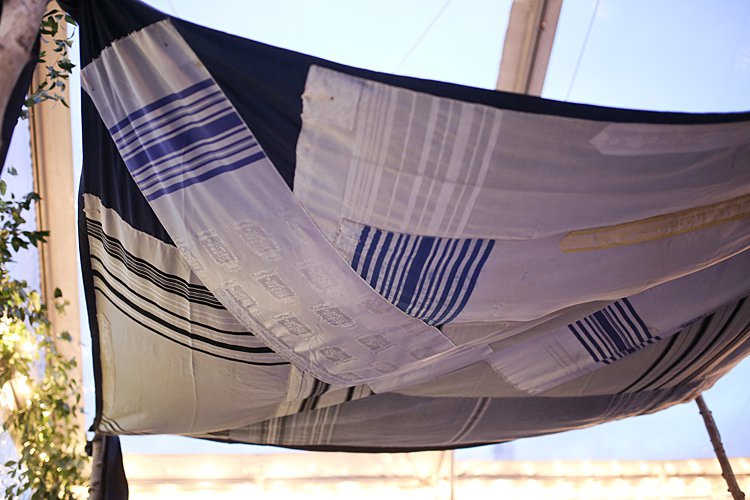 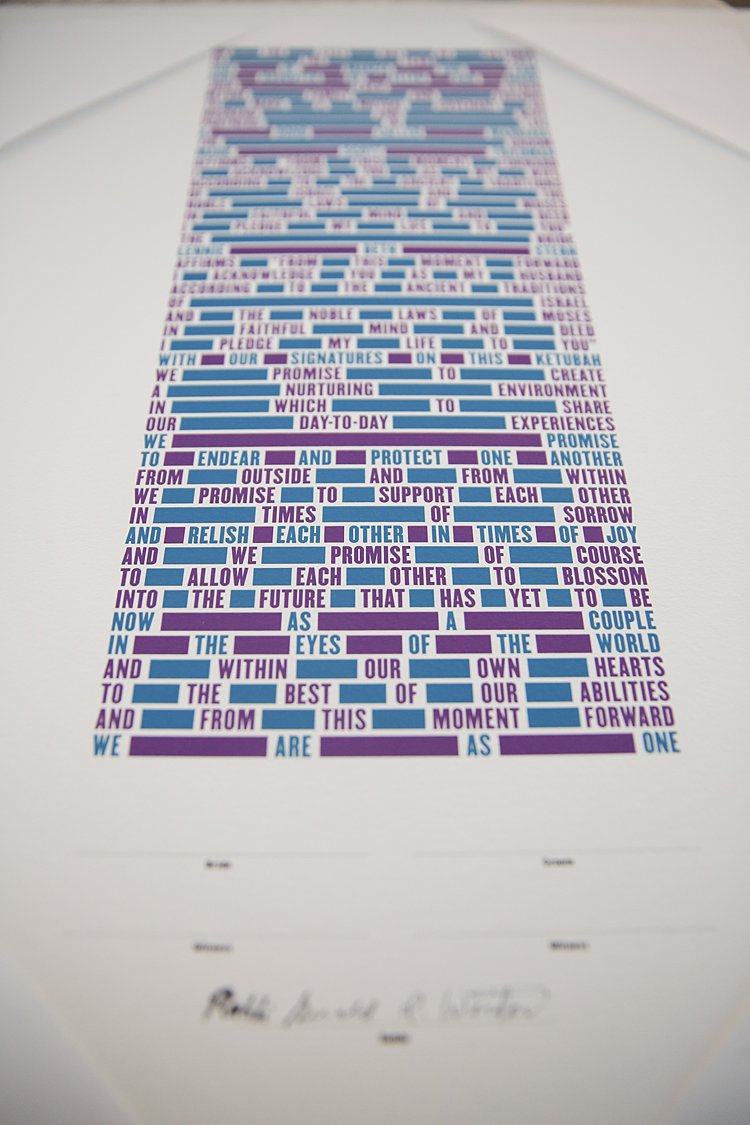 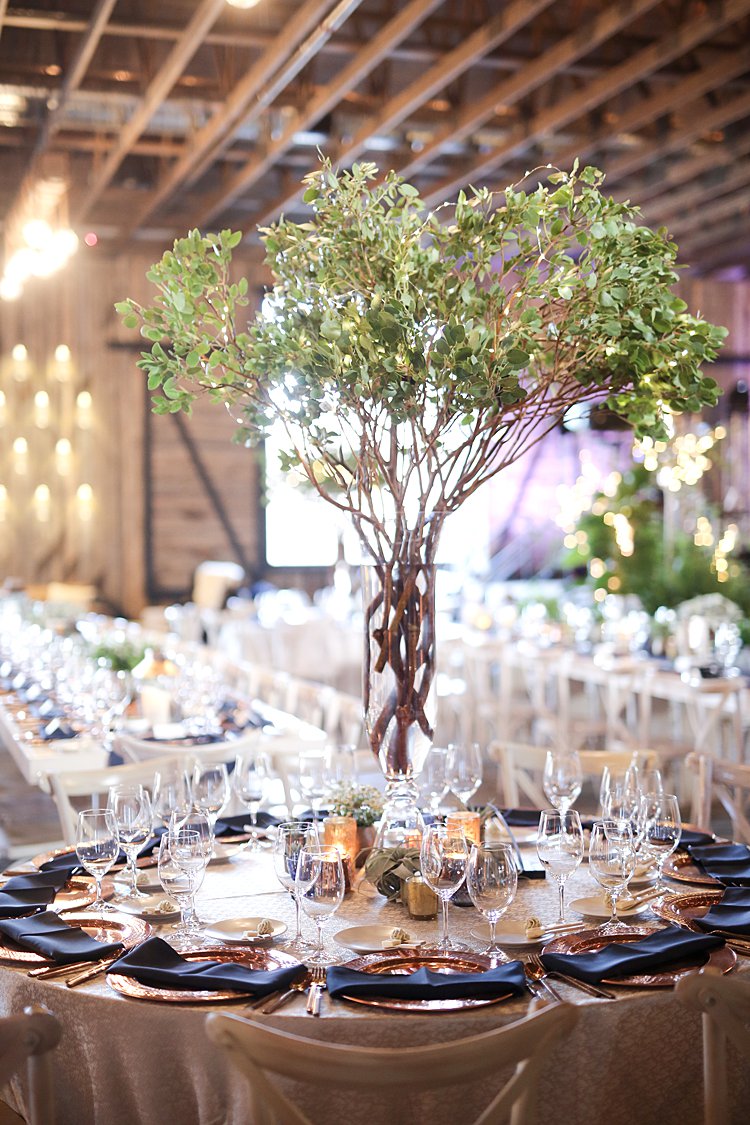 Lennie, the bride: We met on a blind date! One of my friends was out with her husband and another couple, and the guy happened to be one of Mark’s co-workers. Mark was talking about moving, and his coworker was trying to set him up so he wouldn’t move! He’s now stuck in Tampa (where I grew up 🙂

What’s ironic is that I had messaged Mark on Jswipe a year before we met, and he responded once and then never again. So when my friend called me telling me she was setting me up and describing him I said “oh, he didn’t message me back.” This time, he called me, we made plans, and that was that. (I later found out he was getting back together with his ex-girlfriend at the time when he didn’t message me back.)

END_OF_DOCUMENT_TOKEN_TO_BE_REPLACED 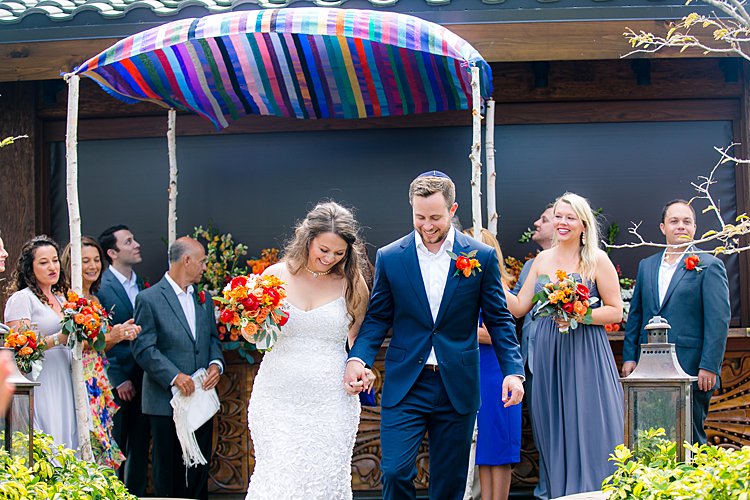 Wow – that chuppah! The colors! The smiles! Looking at the fab photos of today’s colorful, laid-back wedding, you’d never guess what a bumpy wedding planning ride Dana, a product manager,, and Alex, who works in corporate strategy, had!

After a venue mishap forced the San Francisco-based couple to cancel their original wedding plans — for a large, traditional event — Dana and Alex decided to take a step back and rethink what really mattered to them on their day. Their “wedding planning reboot” inspired them to start from scratch and create an ultra-personal day reflecting their personalities and values.

Oh, and just three weeks before the wedding, Dana broke her elbow snowboarding — not that you’d be able to tell from how gorgeous she looked in her delicate petal-covered Theia dress.

The silver lining of all this drama was that it made Dana and Alex focus on what really mattered to them — which meant that their fun-filled, close-knit brunch (yes, brunch!) wedding at Sugar on the rooftop of the East Hotel in downtown Miami turned out to be such a wonderful reflection of their personalities. You can really feel the joy shining through Andrea Harborne and Diana Hogan’s vibrant photos of the day.

We love how the duo incorporated their values into the day was by authoring their own ketubah text. Dana reports that writing their own marriage contract was a great way to stay grounded during wedding planning, and what a special memento of this phase of their relationship. It doesn’t hurt that the finished product is stunning, with a lovely modern floral design courtesy of much-loved STG Recommended Vendor Ink With Intent.

And we can’t get enough of the couple’s DIY handheld chuppah. Constructed by Dana’s family (with a gorgeous, colorful tablecloth standing in as the canopy, which Dana and Alex can continue using in their home!) and held up by friends during the ceremony, it added an ultra-meaningful touch to the day. Now over to the bride… 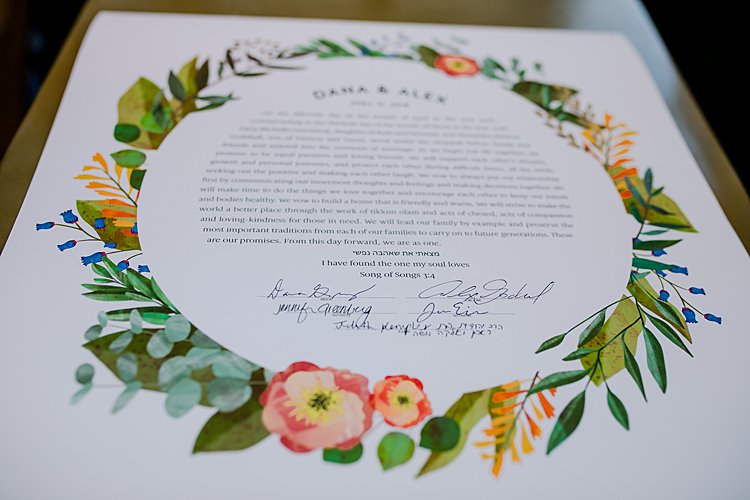 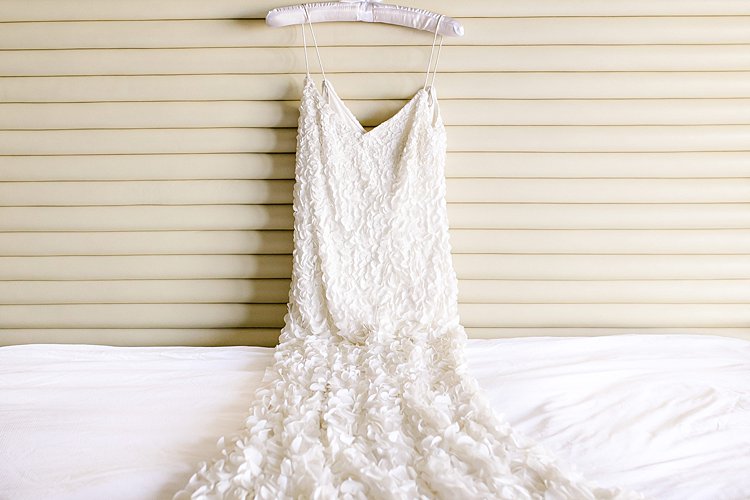 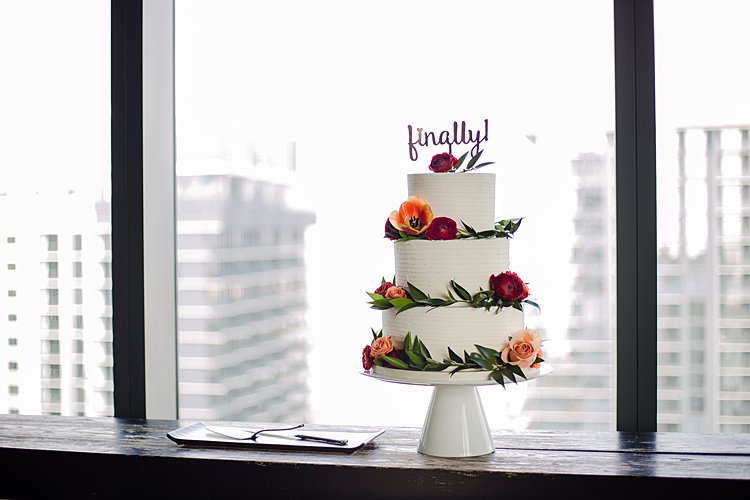 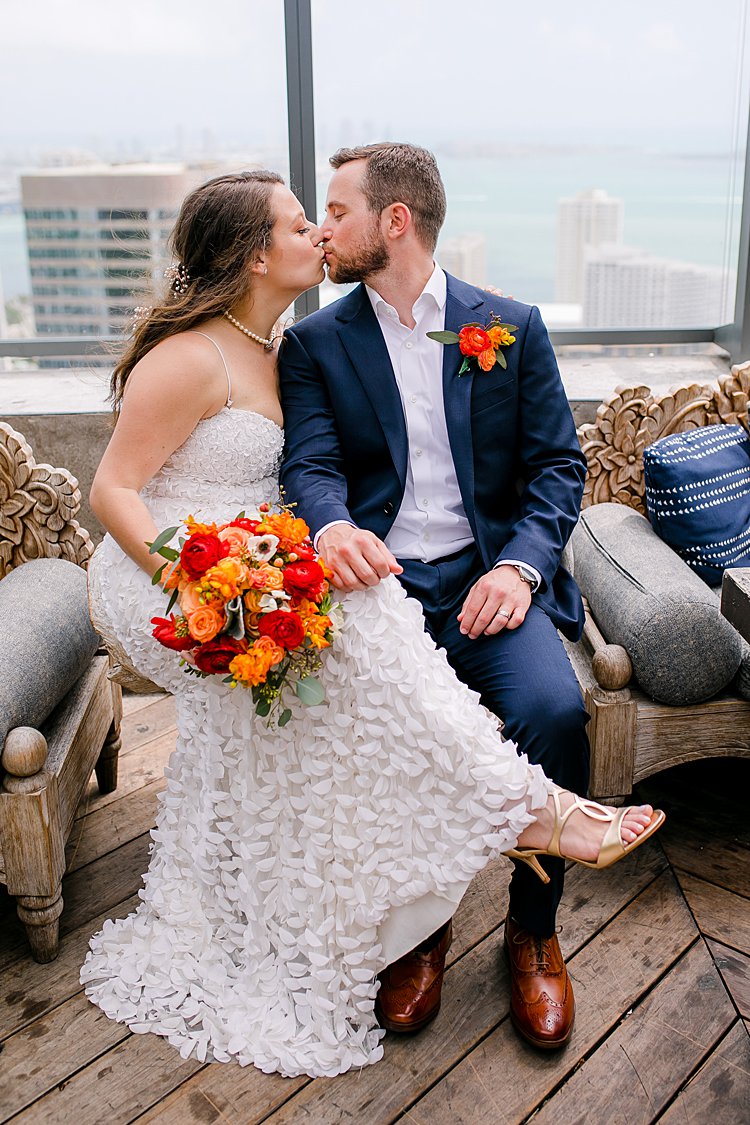 Dana, the bride: We met around 6 years ago when we were both working at the same company in Manhattan, and we moved out to San Francisco together 3 years ago.