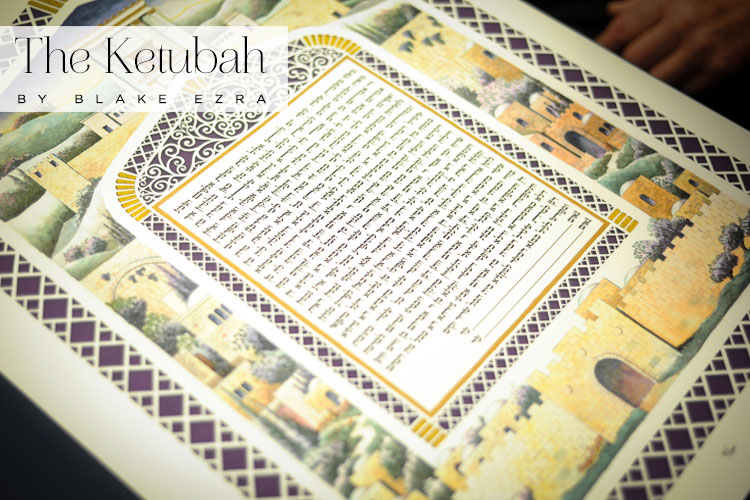 All imagery by Blake Ezra Photography. This is part 2 of the 9-part Jewish Wedding Traditions Explained series.

In last week’s instalment of Jewish Weddings Explained, we looked at the varied ways in which Jewish couples prepare for their wedding, this week we’ll be looking at the Ketubah. The Ketubah is the name of the traditional Jewish marriage certificate, in Hebrew the word Ketubah literally means ‘something written’.

The content of a Ketubah has always, traditionally been a one-way document detailing what the Groom must provide to the Bride in their married lives together, which includes three main things — clothing, food and physical relations.

This ancient document used to deal with concepts such as payments for marriage, which in today’s modern world simply aren’t applicable to most of us. One passage says, “All my property, real and personal, even the shirt from my back, shall be mortgaged to secure the payment of this marriage contract.” We can understand it not as a way to “secure the payment” of the marriage, but as the Groom saying to his Bride, ‘everything I have is also yours, down to the shirt on my back’. 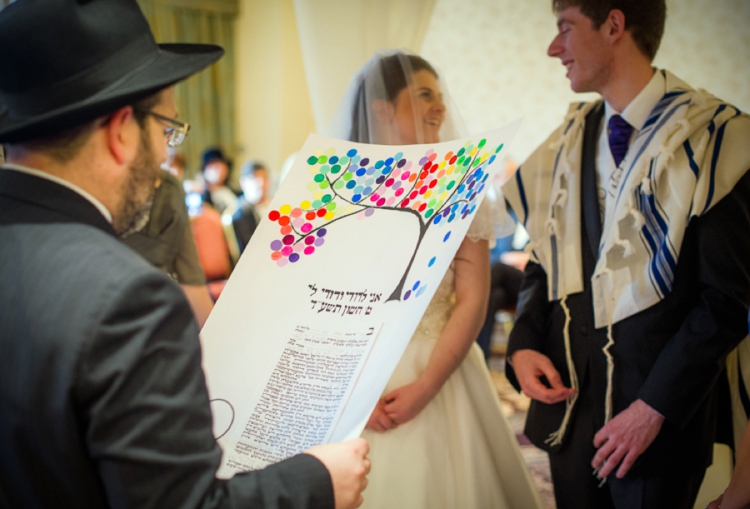 If you’re planning a wedding the Ketubah can be a great thing to personalise to make it more relevant to you. A Ketubah can be decorated in many different ways, with illustrations around the text or colours that represent something about you, indeed there are many artists who custom-make Ketubot, all with a presence on the internet.

The Ketubah is, traditionally, not written in Hebrew but in Aramaic. Nowadays there’s often a translation into whichever language is best understood by the couple, either to the side of the traditional text, or on the reverse. In recent years, Ketubot in texts other than the traditional Orthodox Jewish text have become more readily available, so whatever Judaism is your Judaism, there should be something out there for you… whether your ceremony is Reform, Conservative, Egalitarian or Interfaith.

The Ketubah is usually read by the Rabbi during the ceremony too, so all the guests can hear these obligations and understand the contract. It is often read in Aramaic, followed by a translation into the language understood by most guests. Within the Ketubah is also the location of the wedding, so there’s on occasional funny moment when in the midst of many strange words than none of the guests are familiar with, a word like “Watford”, “Connecticut”, or “Adelaide” pops up.

One of the great reasons behind having a beautiful and personal Ketubah, is that after the wedding, the Ketubah is often hung prominently in the home by the married couple as a reminder of their vows to each other, and a reminder of one of the most momentous occasions of their life.

I hope this has been useful if you’re in the planning stages for your Jewish wedding, next week in Jewish Weddings Explained, we’ll be looking at the Tisch.