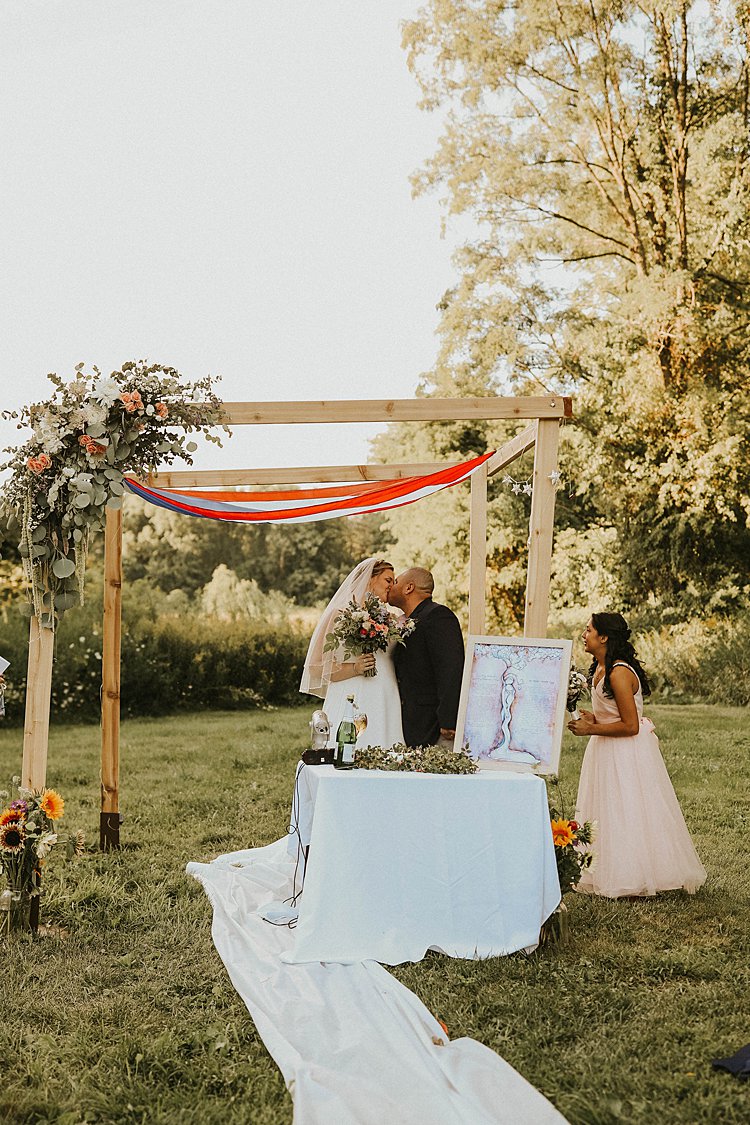 We’re so delighted to be sharing the gorgeous interfaith Jewish micro wedding of our Brides Club member Julia, a social worker for the Department of Veteran’s affairs working to hose homeless veterans, and Josh, an EMT and US Army veteran!

Julia and Josh had originally planned for a 200-person wedding at a local park, but when COVID hit they downsized their guest list and shifted the festivities to Julia’s mom’s property – which, luckily for the couple, just happens to be a beautiful farm filled with green fields of wildflowers.

Regardless of the location, Julia’s top priority was always to create a relaxed and inclusive celebration that embraced both her Jewish faith and Josh’s Puerto Rican heritage. In her words,

My husband is Puerto Rican and most of my friends are not Jewish. While I am rooted deeply in my faith, sometimes I feel isolated by my Jew-ishness. Brides Club felt like this beautiful validating hug. I was able to get so much out of the articles and vendor tips. I wish I had found Smashing the Glass earlier!

The pair opted for a mostly Jewish ceremony under a chuppah (covered by a Puerto Rican flag with a Star of David at is center – designed by the groom!), officiated by Julia’s mom’s best friend, who is the rabbi of an interfaith Jewish congregation. And we love that they incorporated their daughter (who also gave a beautiful speech and sang a song for the couple!) into the ceremony, too.

Don’t miss the beautiful images from Abigail Renee Photography – or the rest of the story of this very special day, as narrated by the bride… 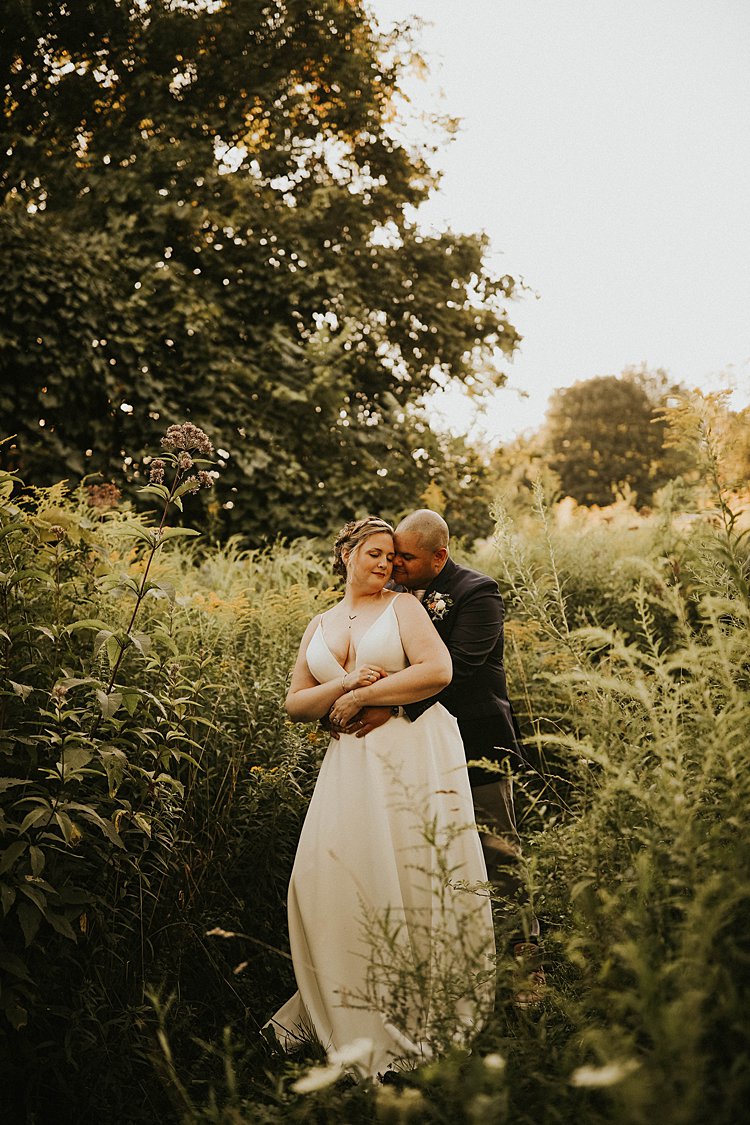 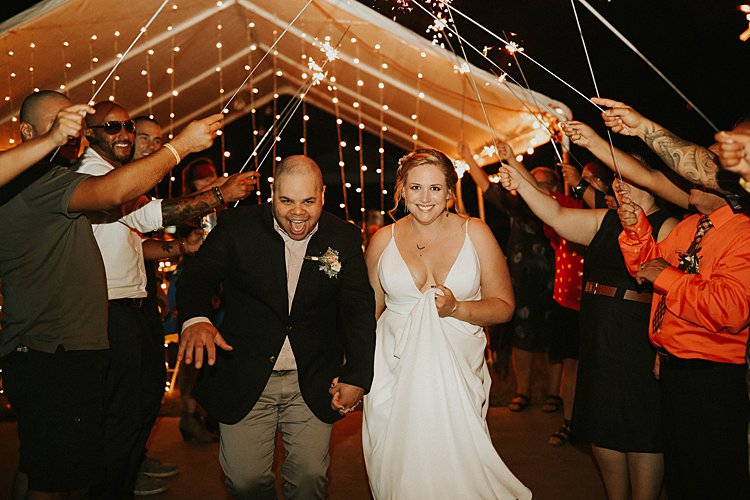 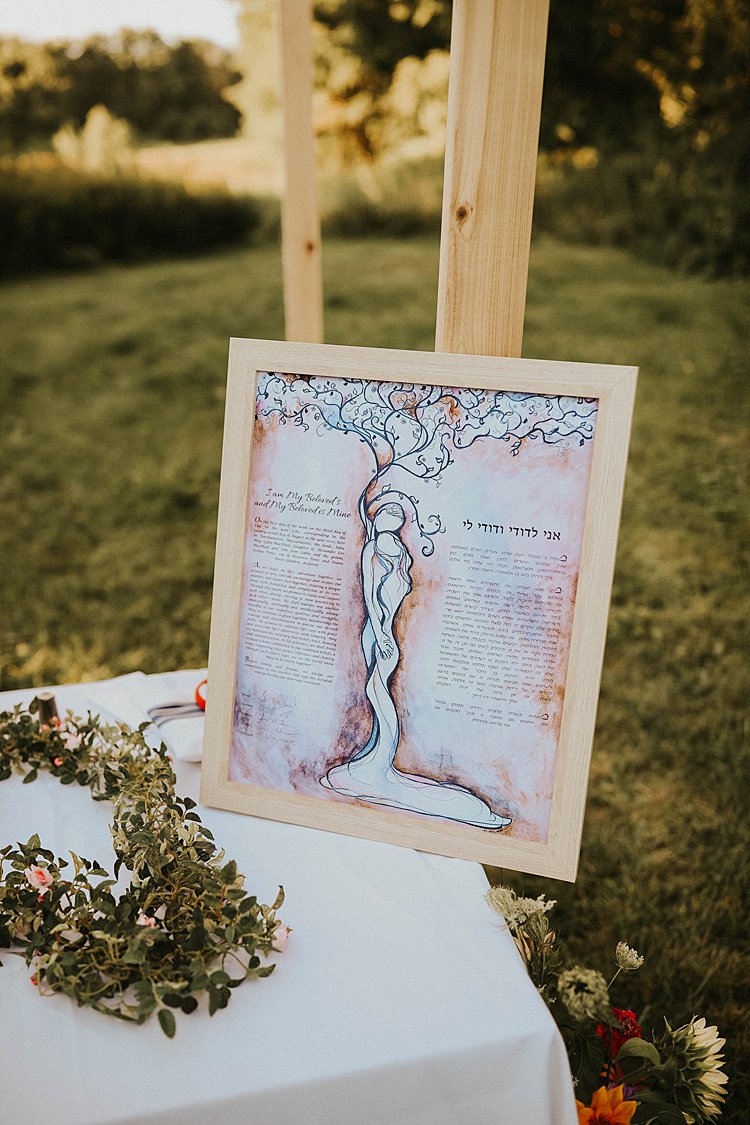 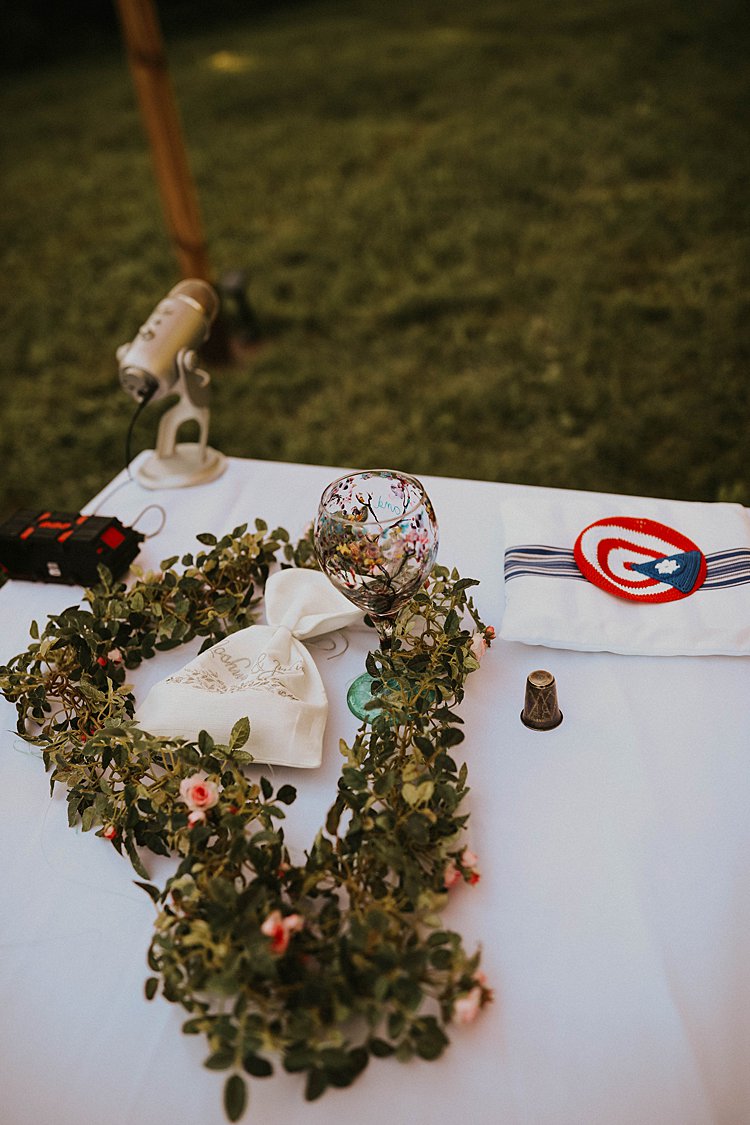 Julia, the bride: Josh and I met working at a group home for teen girls. We both worked third shift at the time. When he started, he requested to have Fridays off and I lost my Shabbats off, so I decided I was not going to like him. (Boy did that backfire!) Turns out the reason he couldn’t work Fridays was because of his daughter. He used his weird sense of humour and a few honeydew melons to get me to talk to him.

When the group home closed, he asked me out (I was his supervisor). I said no. Josh was deployed a few weeks later and when he got to his post, he asked me if he could take me on a date. I agreed when he got home to go on a date with him. When he got home, he drove four hours from the airport home, showered and came right to pick me up.

About four years later he proposed in front of Boston Harbour.

END_OF_DOCUMENT_TOKEN_TO_BE_REPLACED 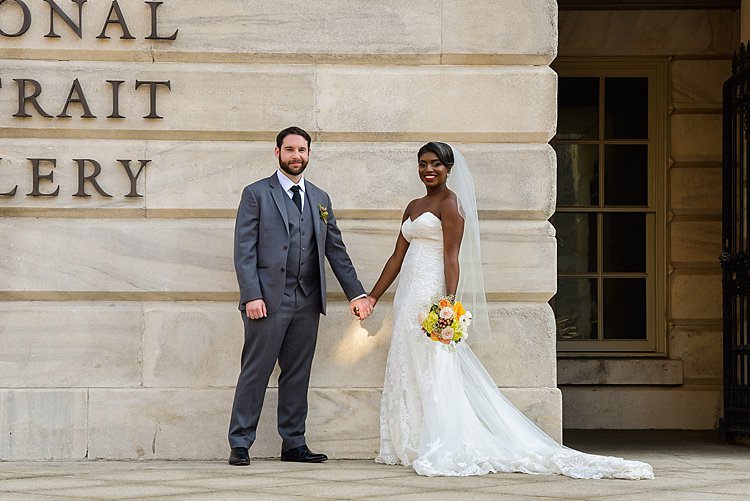 We always love hearing from couples who’ve used Smashing The Glass as a wedding planning resource, and today is no exception. Beautiful bride Kiki reports that she loved STG for the real wedding inspo and vendor suggestions, and especially the Jewish 101 sections, which she found super helpful in planning her Jew-ish ceremony. Aw, thanks Kiki!

It was important to Kiki and Rob to plan an inclusive Jew-ish wedding that would be equally welcoming to Rob’s family, who are Jewish, and Kiki’s, who are not. They found the perfect spot in the historic Sixth & I Synagogue in their hometown of Washington, DC — you’ve got to check out the gorgeous photos from Ryan Hicks of Lily & Lime — with the reception nearby at Loft at 600 F, another cool historic building, just the thing for a modern vintage-themed wedding!

Also perfect for the modern vintage aesthetic? Kiki’s stunner of a gown by Eddy K, a strapless lace low-backed number with a dramatic train.

But the visuals are far from the only thing we’re loving about this wedding. Kiki and Rob incorporated all kinds of personal touches into the day. Our favorite: before the wedding, their rabbi had them each write ten things they love about each other and email it to him. Then, on the day, before the seven blessings, he talked about the pair as a couple and mentioned the things they had said about each other. Isn’t that the sweetest?!

Before we hand things over to Kiki, we’ve got to mention that we’re so pleased we were able to help guide Kiki and Rob toward Smashing the Glass Recommended Vendor Ink with Intent for just the right ketubah. In Kiki’s words, working with them was “nothing short of amazing,” with customer service that went above and beyond. 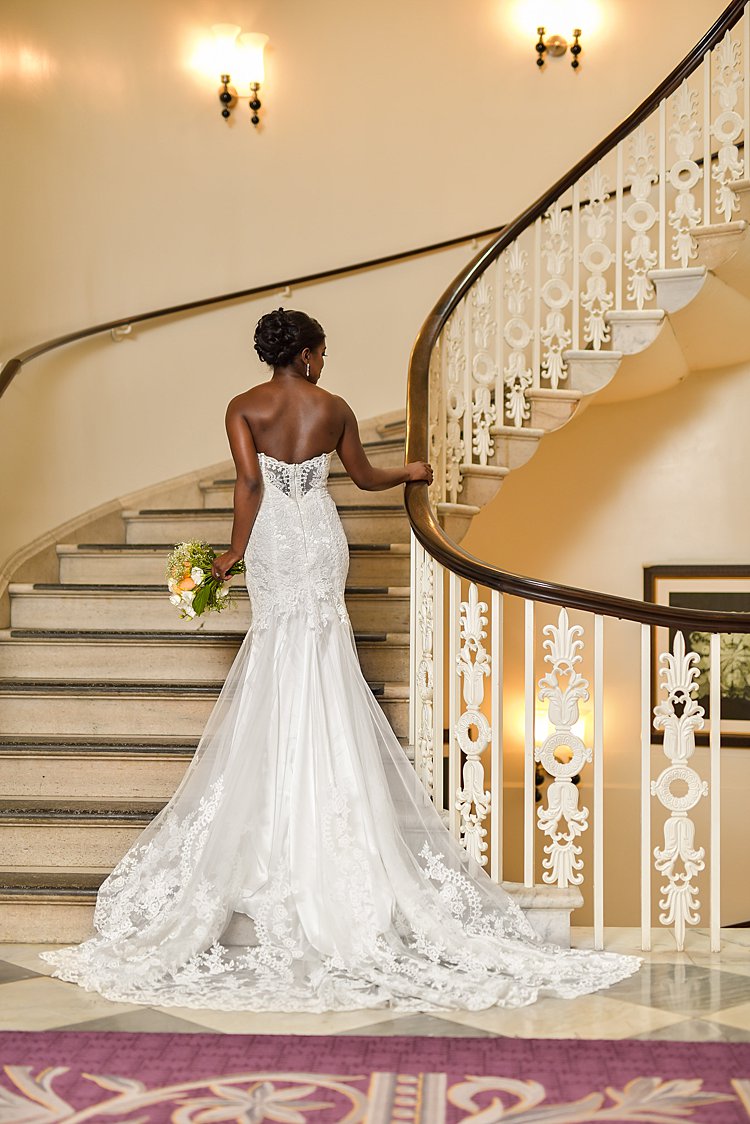 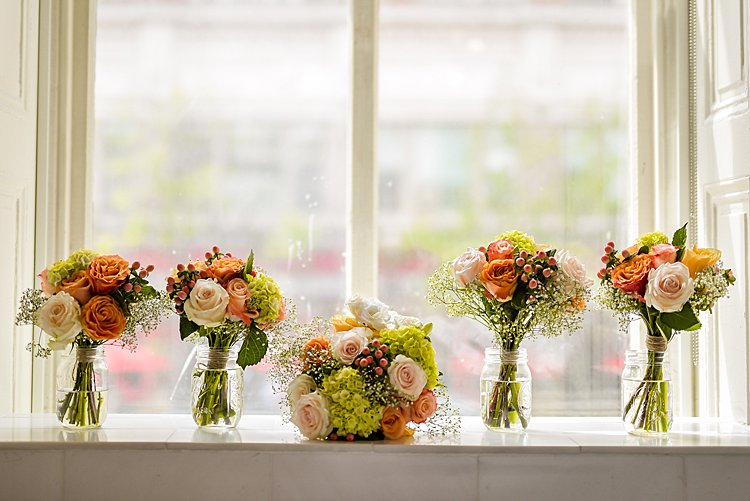 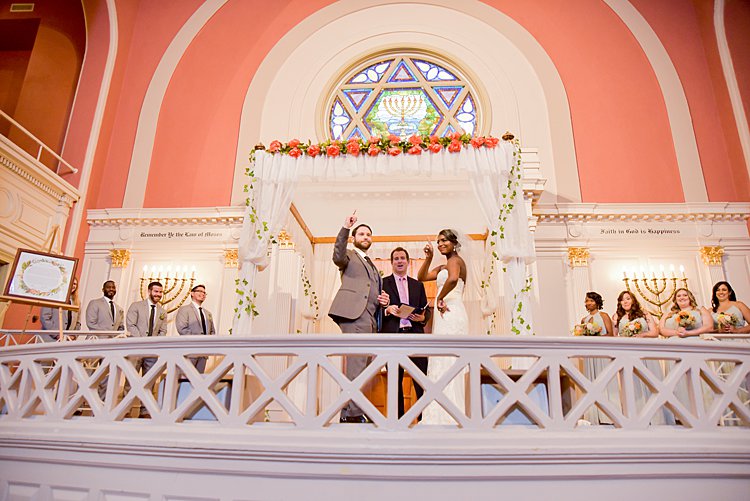 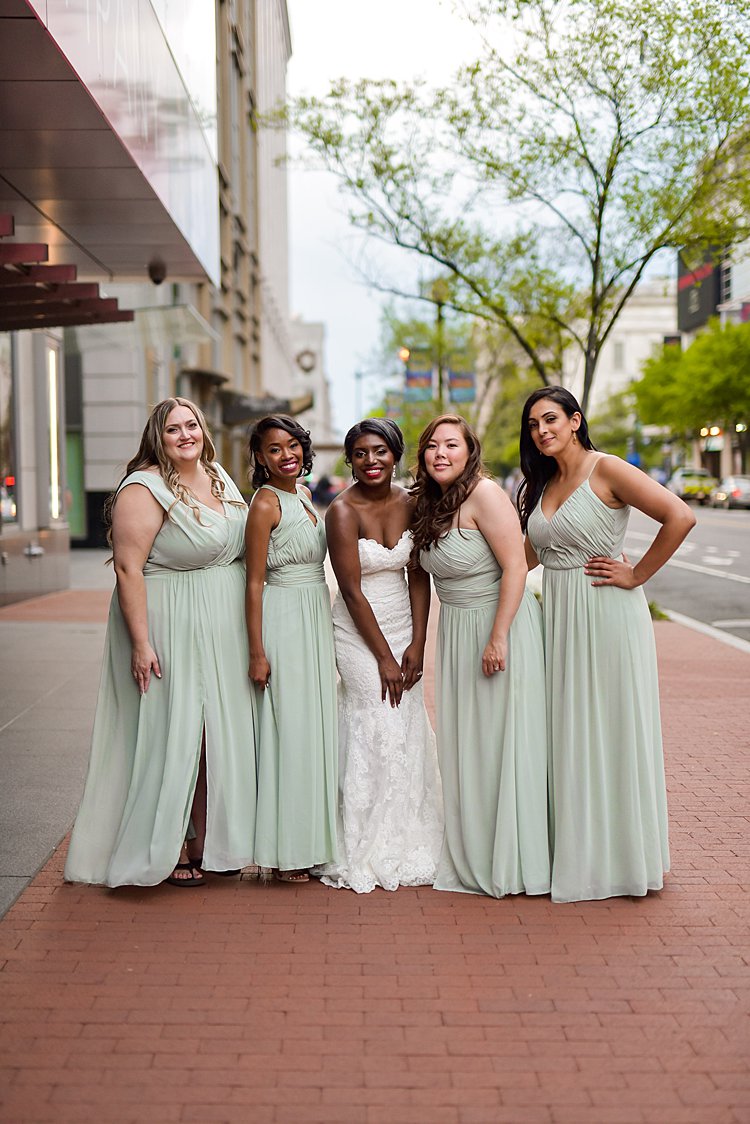 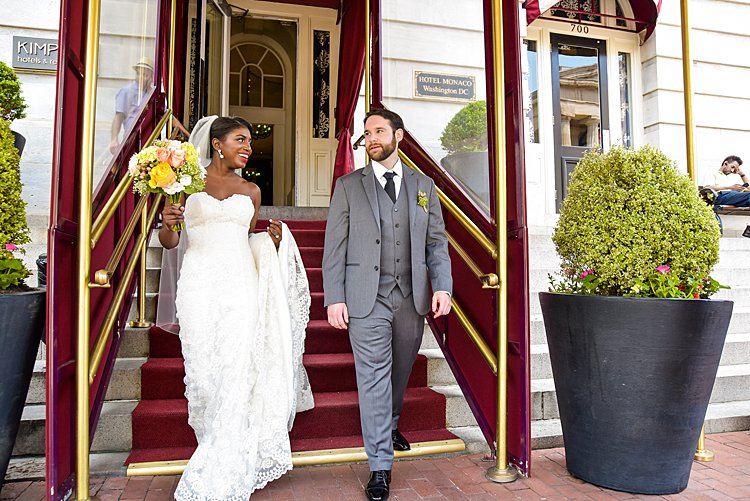 Kiki, the bride: We met when I started working at George Washington University in fall of 2013 and became friends first through lots of happy hours with coworkers and mutual friends. He now works at NIH in research imaging and I work at GWU assisting in patient care. We started dating that December, and got engaged while on vacation in Florida in December 2016 on the beach at sunrise.