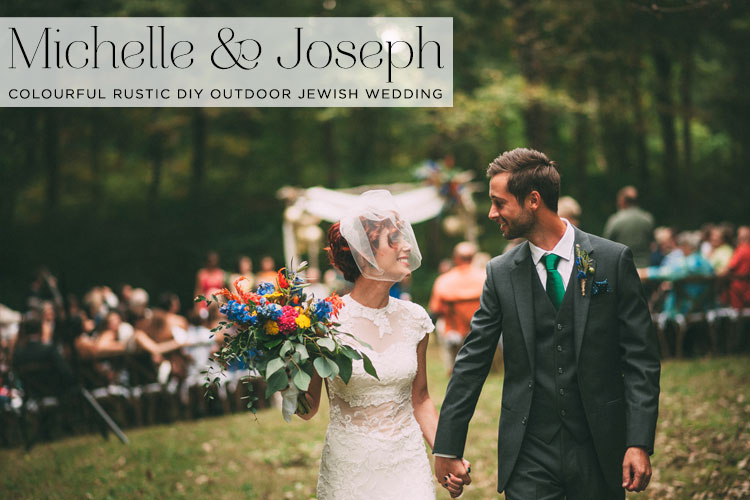 We got married on Joseph’s family property out in rural Tennessee, about an hour outside of Nashville. We chose this venue because the land has been in his family for over 200 years. There is a family cabin on the property where Joseph’s grandfather was born. Surrounded by 150-acres of lush rolling hills the land is now home to four generations of his family. 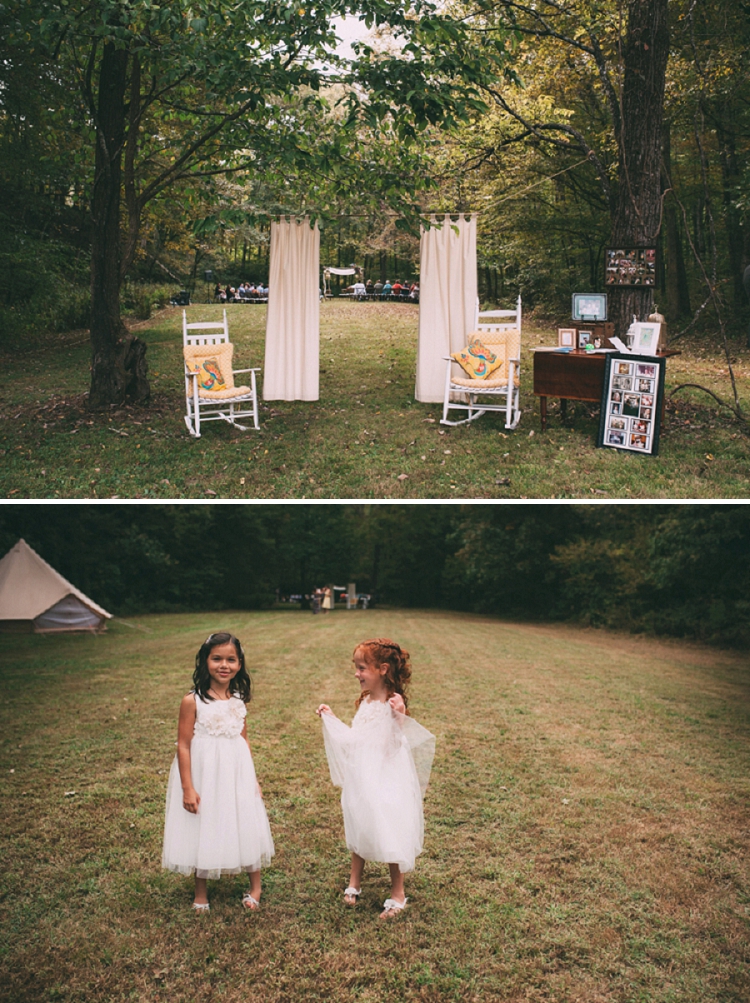 Our concept was “Mediterranean meets rustic South.” It was inspired by a blend of my Israeli heritage, with its rich, vibrant colours emblematic of Middle-Eastern culture, and Joseph’s Southern American roots– lush, vibrant greenery of summers in his native Tennessee, and the similarly colourful flora and fauna to be found in the region.

We used a rockstar planner to help us bring the theme to life: Ashley Reed of Sweetwater Events. 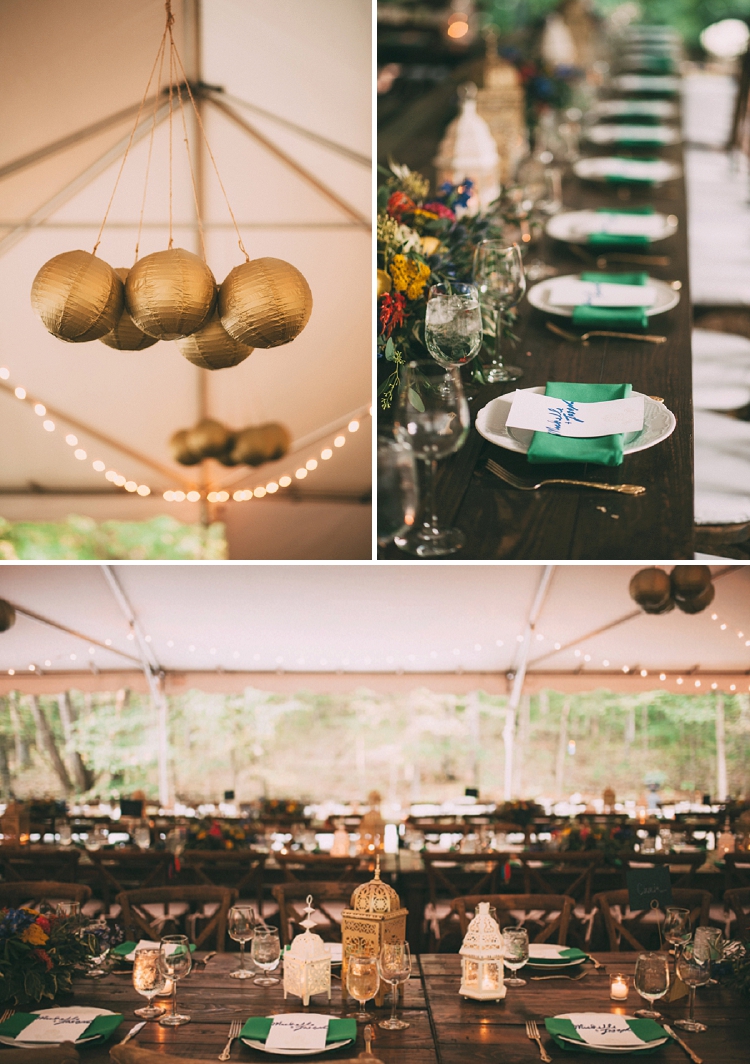 Designing our invitation together

Joseph and I are both graphic designers so we decided to design our invites ourselves. But it was important to us to use our wedding as an opportunity to collaborate with other artists and creatives we admired. We commissioned an illustrator Joseph had worked with in past, the talented Monica Ramos, to create a custom illustration that we could use on various pieces for the wedding. It was based on a quote by Ram Dass “We are all soul mate. There is only one of it. It’s not mate, because its not even two. It’s only one.” You can see the final designs with illustration here. 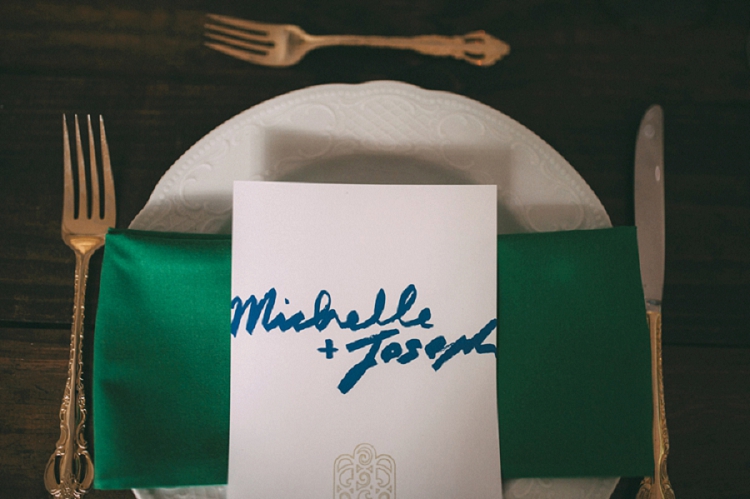 My hair was done by a friend from San Francisco, Heather Dean of Edo Salon, and make-up was done by Nashville’s Sherita Leslie. I wanted to look a little more glam because, why not, it’s a wedding! 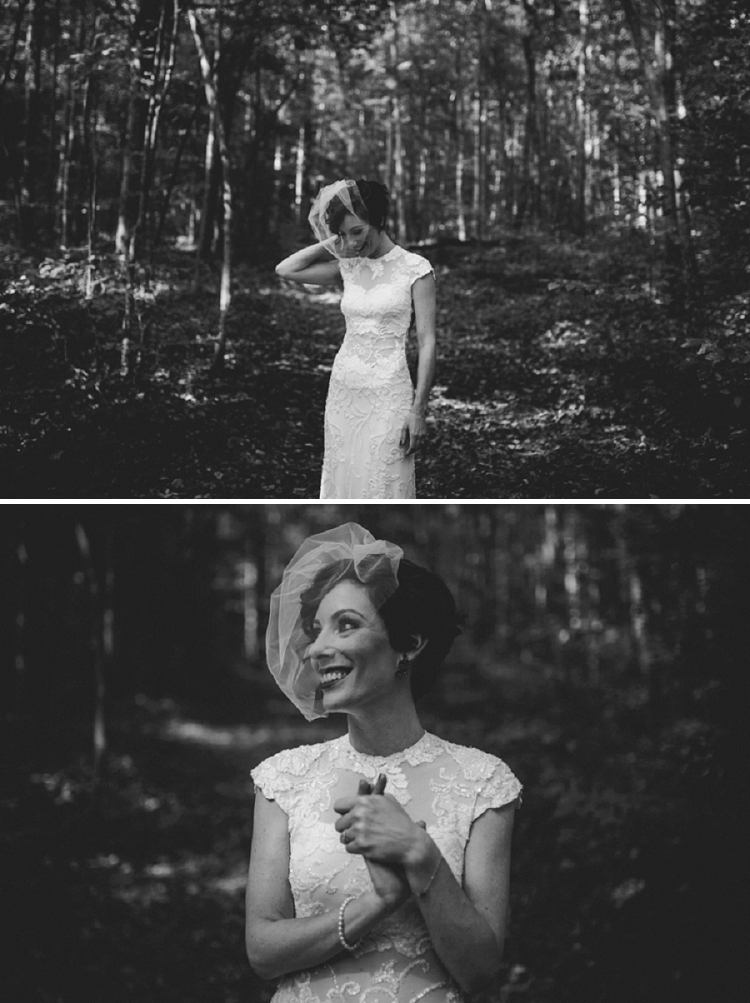 A last minute change of dress

So funny story: I had an entirely different dress for my wedding tailored and ready to go months in advance of the wedding. It was by the designer Aidan Mattox. Then about 2 weeks before the wedding my mum and I went shopping together at Bloomingdale’s to find some last minute items, and we can across this gorgeous wedding dress. It was on a inconspicuous sale rack, cast aside and slightly torn in one spot. I tried it on for fun, not thinking anything of it. But then when I looked in the mirror, it was like magic, I felt like a different version of me: sparkling and glowing with pride.

My mum and I looked at each other, took a deep breath, and knew right away. We bought the dress and had it rush tailored in two different cities because of our trip from California to Tennessee for the wedding. It was crazy, and I don’t recommend such last-minute planning, but that dress was definitely “the one.” I don’t even remember the name of the designer because we had the tag removed, ha. 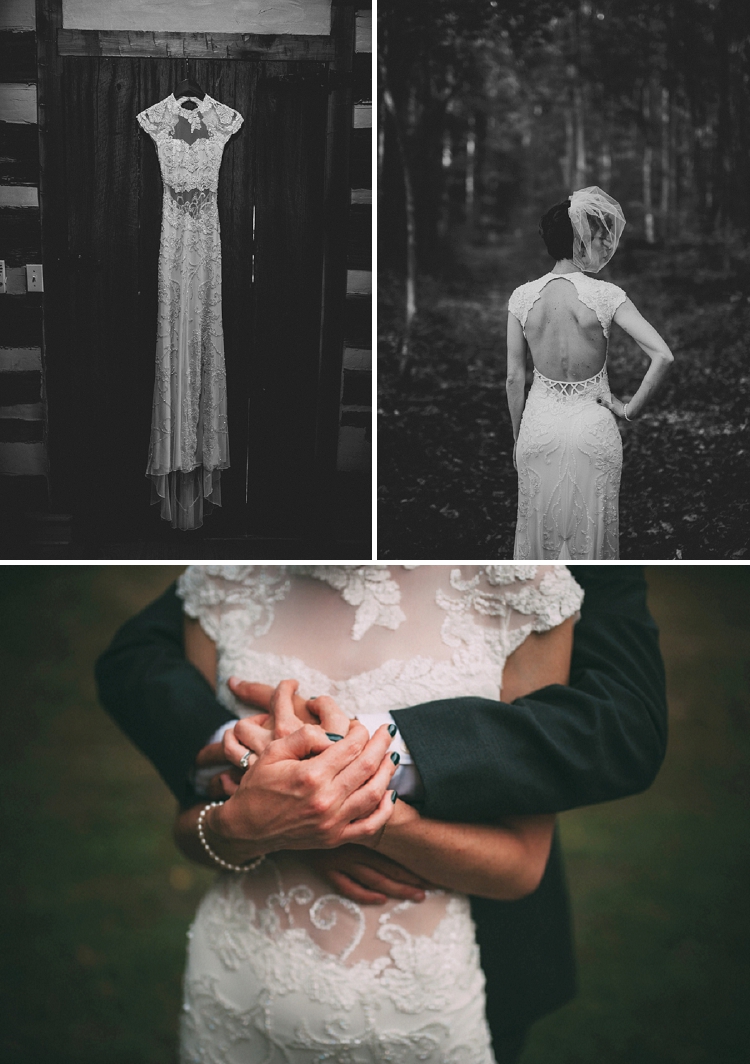 Jewellery included emerald earrings from a designer on Etsy, Petit Delights, who coincidentally lives in Israel, my veil was from Twigs & Honey, and my bracelet was a string of pearls borrowed from my older sister. I wore accents of emerald green (earrings and shoes), a reference to the lush greenery of Tennessee, and had my identical twin sister wear an emerald green dress. Our wedding rings and bands were from Lang’s Antiques in San Francisco.

My shoes were skyscraper high, gorgeous emerald green Badgley Mischka Kiara heels. They had a very art deco quality to them, which you can see here. I also bought these great heel extensions called Solemates that help prevent the heel from sinking into the grass. 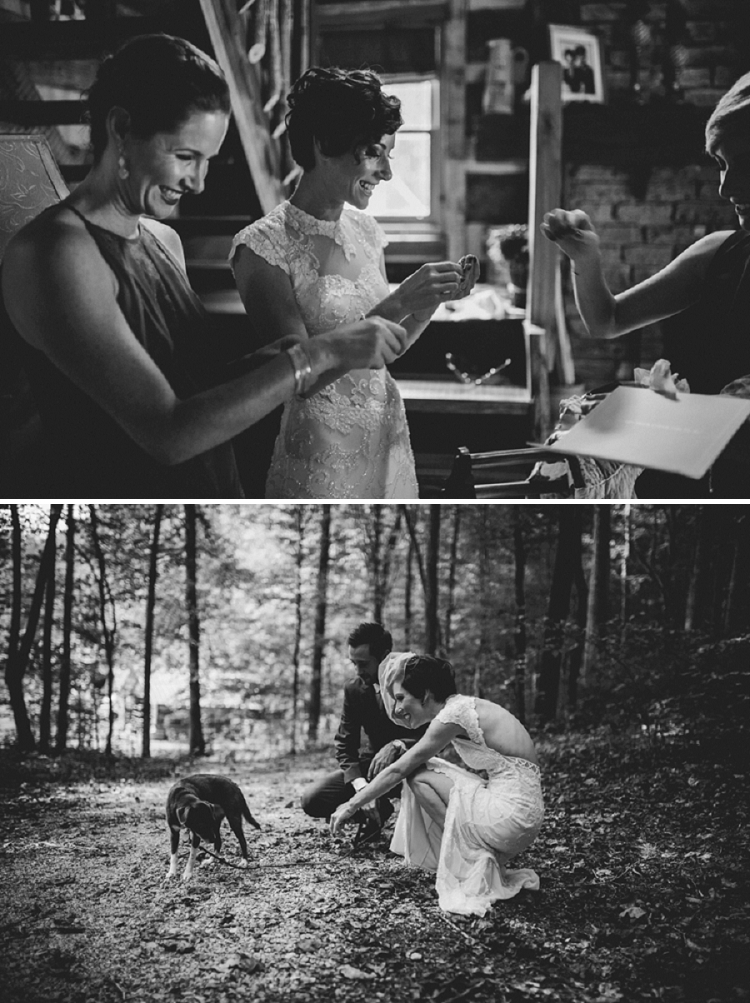 Joseph and all his groomsmen rented their suits from a great online rental company called The Black Tux. We had him in an emerald green tie and socks so there was a bit of colour coordination between us without overdoing it 😉 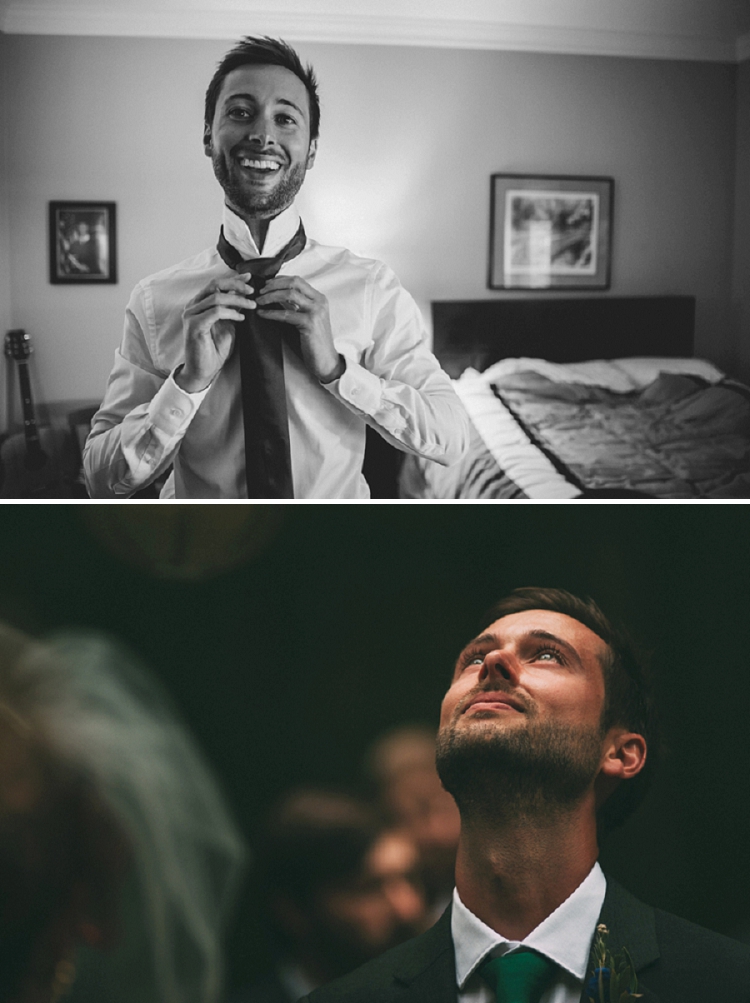 Bridesmaids in different colours from our palette

I had five bridesmaids, my two sisters and three childhood friends. From the start I knew I wanted a super colourful bridal party. I asked them each to select a different colour from our palette (kelly green, flamingo pink, tangerine orange, canary yellow, royal blue and emerald green) and let them get any style of dress they wanted. I wanted a more eclectic look, and for them to each feel comfortable in their individual dresses. They looked gorgeous together! 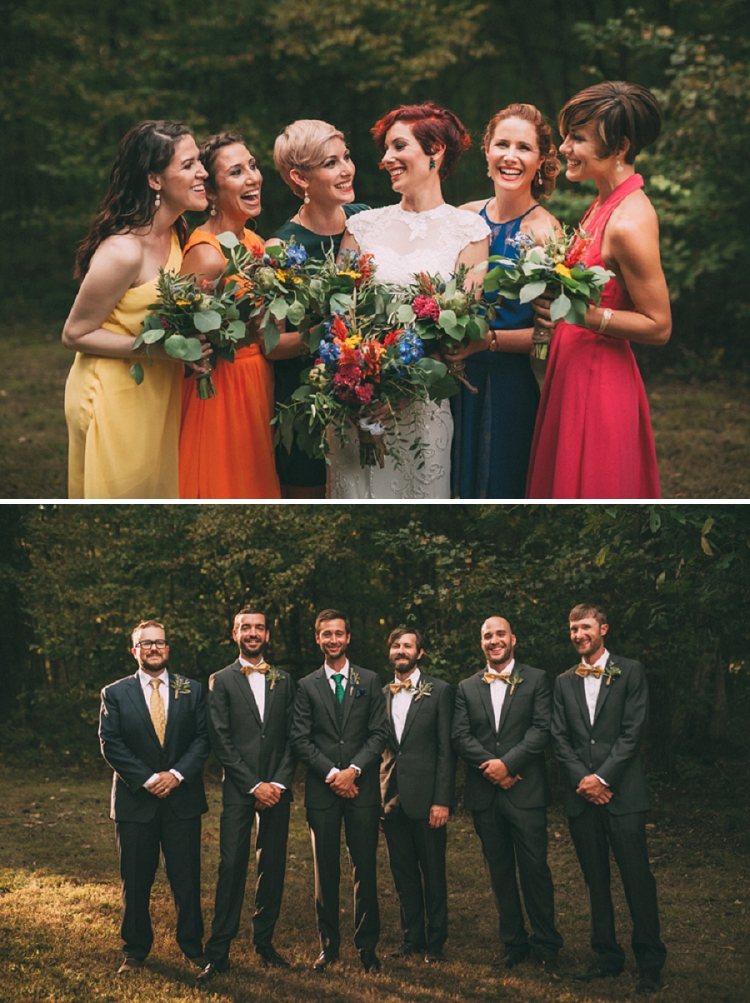 We wanted our chuppah to match the rustic surroundings, so Joseph and I and his parents built it from scratch the days before the wedding from the wood in the surrounding forest. Talk about DIY, chopping down wood one day and getting married the next. We hung white linens over the top of the chuppah and round, golden paper lanterns as a reference the golden-dome buildings throughout old Jerusalem. We also hung multicoloured tassels from the ceremony chairs and planted Moroccan-style lanterns around our chuppah to tie back into our theme of Mediterranean meets rustic South.

Special touches for the ceremony included a lovely traditional Appalachan style string band. Joseph and I both play this style of music so wanted to hire some of the best musicians in Nashville, one all the way from New York, to play at our wedding. We also did something we called “Community Vows” in which after we spoke our own vows and said “I do” we asked the audience to promise to love and support us in our marriage and say “I do” as well.

That was an amazing moment, and the audience loved it as well as they got to participate in the ceremony. We wanted a mostly non-religious ceremony as Joseph and I both come from different religions, but we did hakafot and broke the glass because we loved the meaning behind these two traditional Jewish rituals. 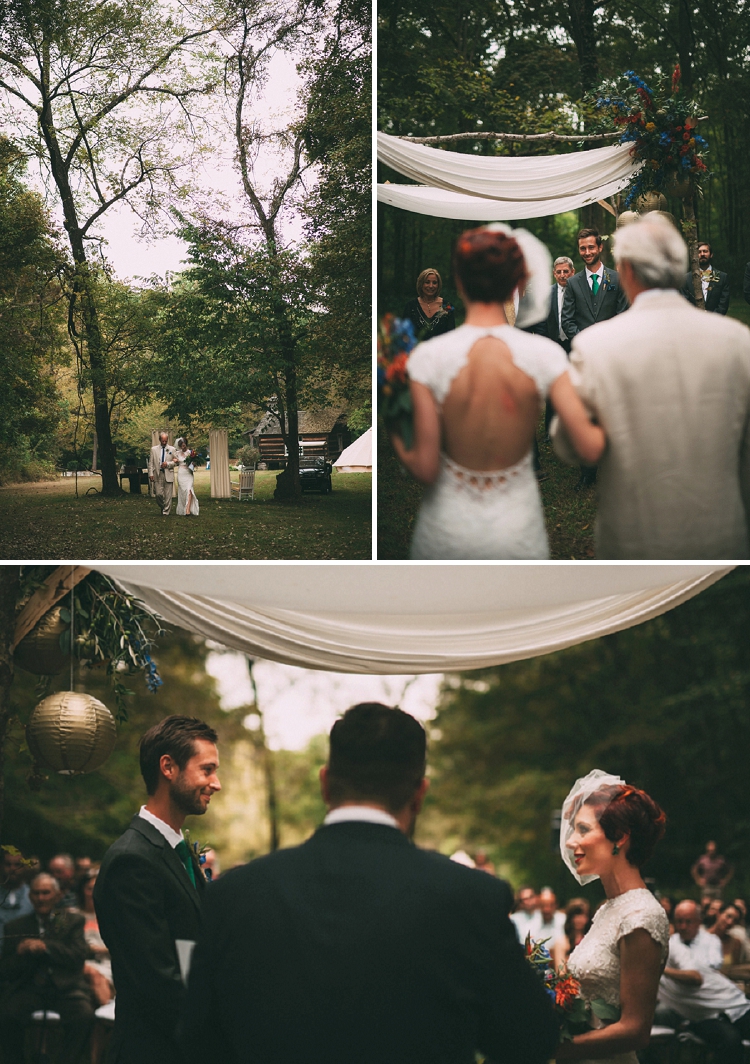 At the end of the serene, windless ceremony, we were walking back down the aisle, everyone was cheering and the suddenly wind picked up,  swirling leaves and butterflies all around us. It felt like pure magic.

Also, we let our little hyper terrier dog, Sadie, run wild all day but she lay perfectly still and quiet at our feet during the ceremony, then took the cue for the recession walked just a few feet in front of us as we departed from the ceremony. She basically led the recession, it was the cutest! 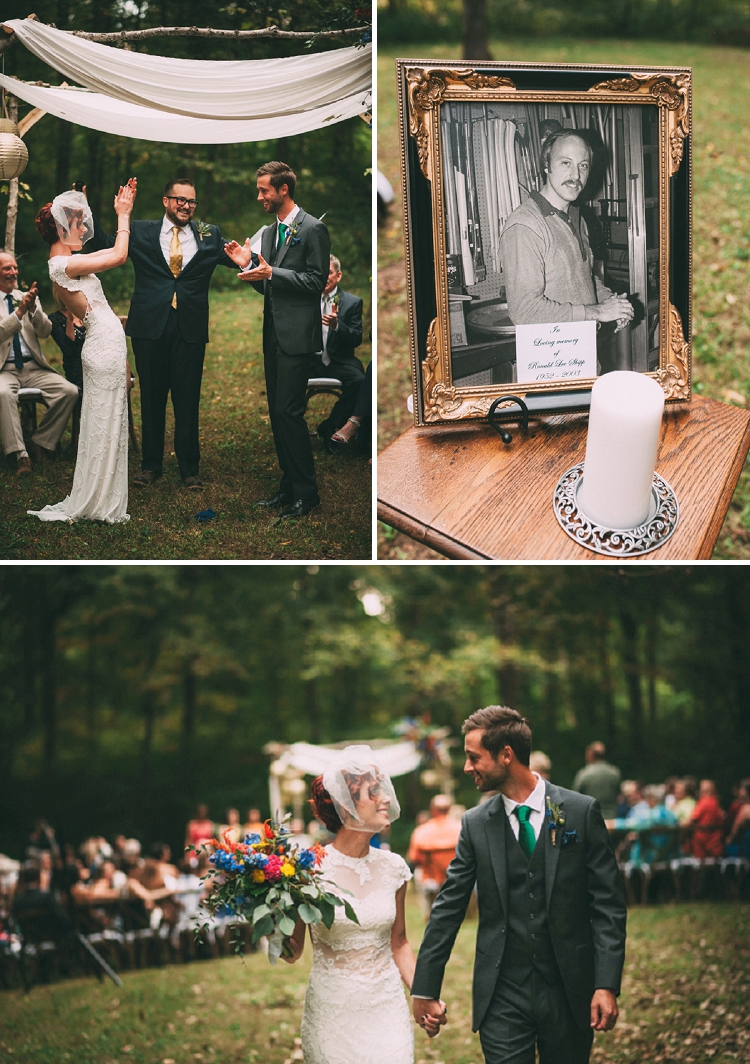 During the ceremony we chose traditional Southern fiddle tunes that we love, especially Leland’s Waltz, which they played as I walked down the aisle. I still tear up every time I hear it. For our first dance we chose Close My Eyes, which is just a beautiful, gentle song from the talented, late Arthur Russell. We listened to him quite a lot during the first year of our relationship. 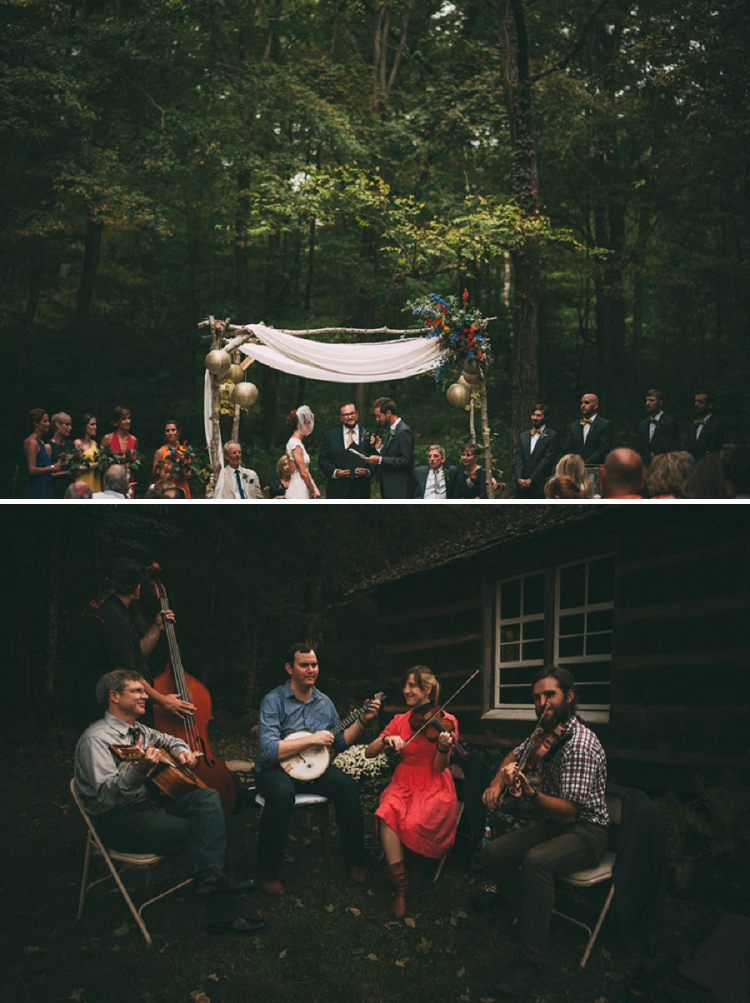 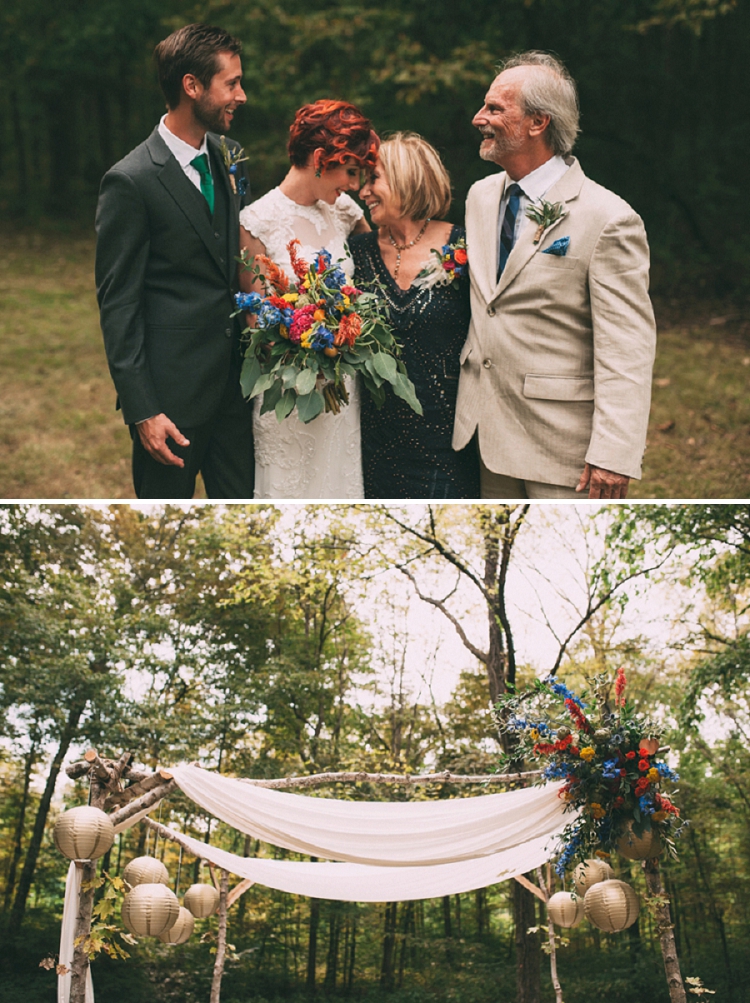 Another funny story about our photographers, husband and wife duo Nate and Jaclyn Kaiser of The Image Is Found–we found them via a grapevine of recommendations that started with a Nashville photographer that I randomly met in an Uber pool in San Francisco! Nate and Jaclyn had recently moved to Tenessee from California, so we had a lot in common with them, and of course their work is amazing. They’ve been in the business for years, and were responsible for the rise in popularity of documentary style wedding photography. We’re still friends with them to this day. 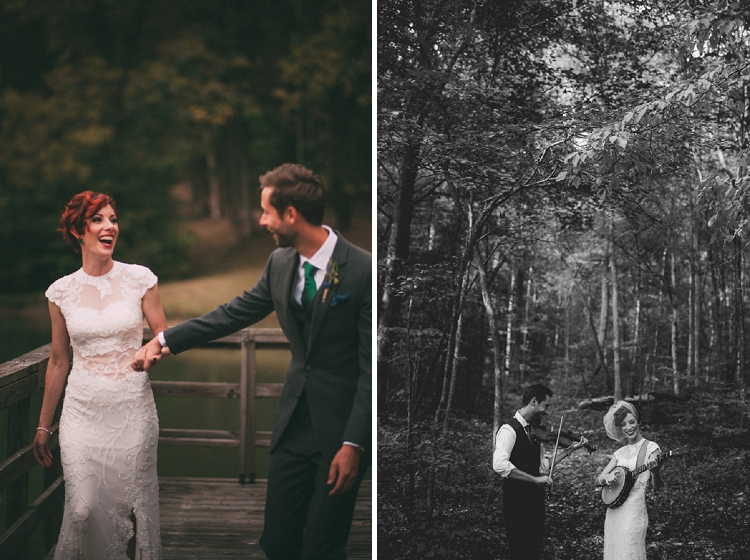 A wedding cake topped with our instruments

We had our cake done by Nashville’s The Frosted Affair, it was a combination of strawberry and nut-free carrot cake. It was beautifully decorated in brushed gold on buttercream frosting, adorned with florals, and topped with a custom-made wooden banjo and fiddle cake topper, which are our two instruments 🙂 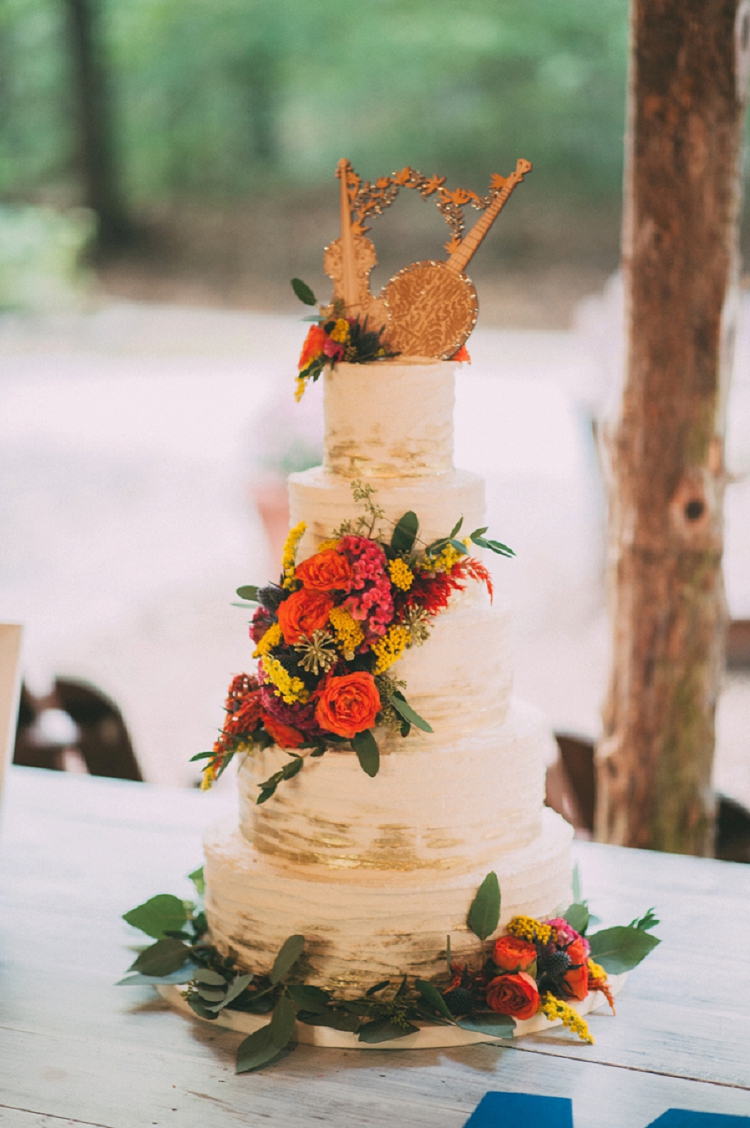 The string band played through the evening for us, including for a traditional square dance which we hired a professional caller for and all–Nashville local favourite T-Claw. Square dances are amazing because everyone has to constantly switch partners throughout the dance, so people end up dancing with just about every other person on the dance floor. We wanted it to feel like family our there, and break the ice between strangers quickly!

We gave jars of fruit jam to our guests from a Nashville foodie staple called Loveless Cafe. 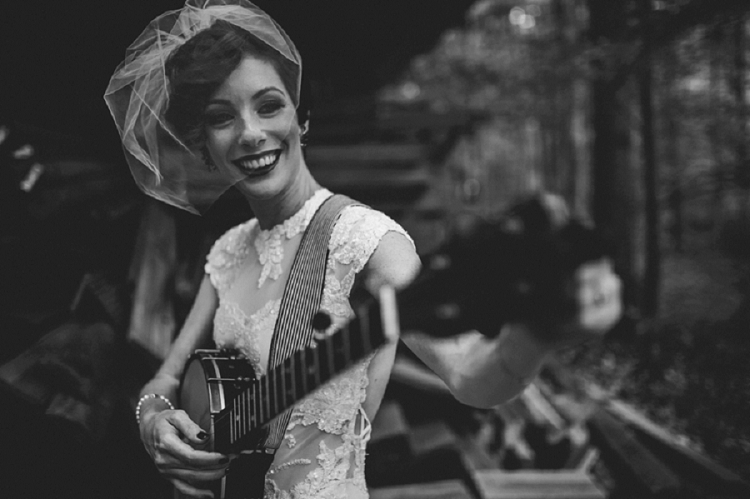 Our caterers were freaking fantastic, G Catering in Nashville. Our wedding was quite a way away from the city, but despite the distance the food was all perfectly prepared, dressed, perfect temperature and absolutely delicious. Our guests couldn’t stop talking about the food for weeks after. They also got really creative with blending traditional Southern ingredients with mediterranean accents.

Advice to brides and grooms currently planning their wedding

I met a woman at a restaurant a few weeks before the wedding who gave me the best advice: she said, at some point during the day take a moment to stop and listen to the sounds around you–of people laughing, the wind blowing, birds chirping–and just take them in. Then, at another point stop, close your eyes, and smell the air around you–the food, the plants, the flowers–and take them in. Lastly, during the night, stop and look around you at the sights–your friends and family, the decor, the scenery–and take them in. She was so right, as these little rituals helped me be mindful during a day that can often be such a blur. 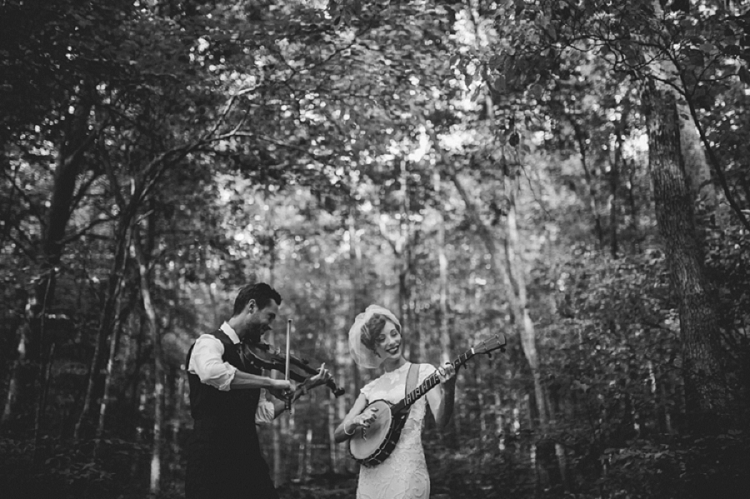