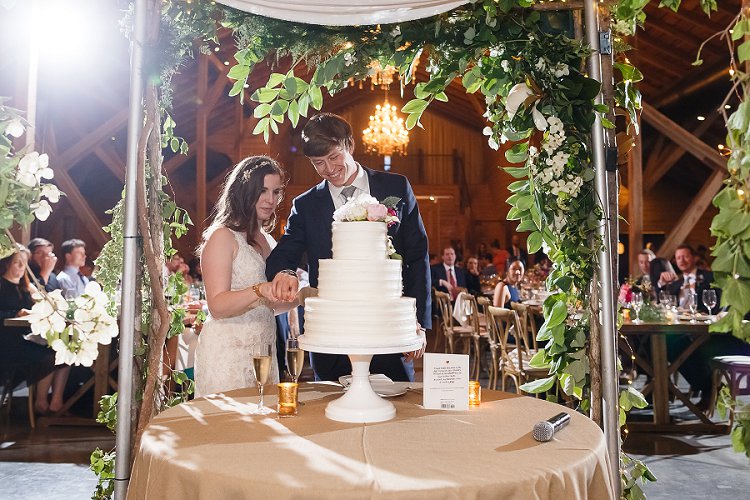 A chuppah draped with foliage, a three-tiered buttercream cake topped with fresh flowers, a country barn venue – these are just some of the reasons we wish we’d been at Sandra and Matt’s rustic big day.

The whole wedding was a visual dream, with pops of bright, spring colors against dark, earthy backdrops, at a venue with special meaning to the couple.

Despite dramatic weather, Sandra and Matt soldiered on, even making the rain a feature of their wedding, with the bridesmaids in adorable rain boots (or wellies, for the Brits!).

The beautiful photography below was provided by Don Mears Photography, so we’ll let you go and gawp at it now. Enjoy Sandra and Matt’s big day story (we adore the tale of their first meeting – it’s like something out of a movie!) 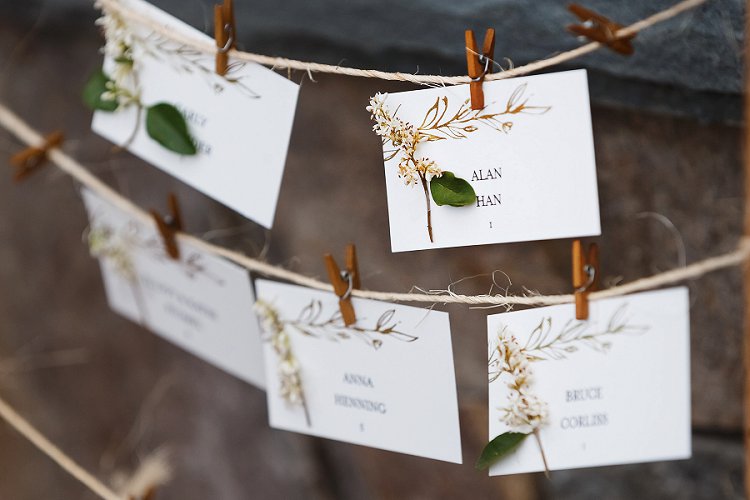 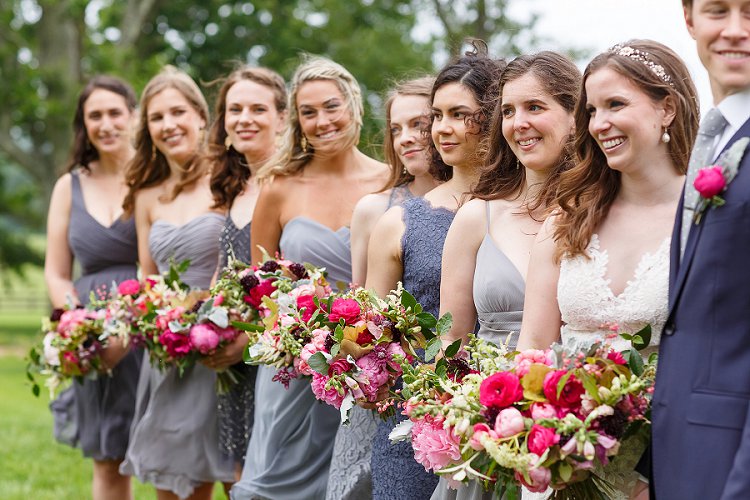 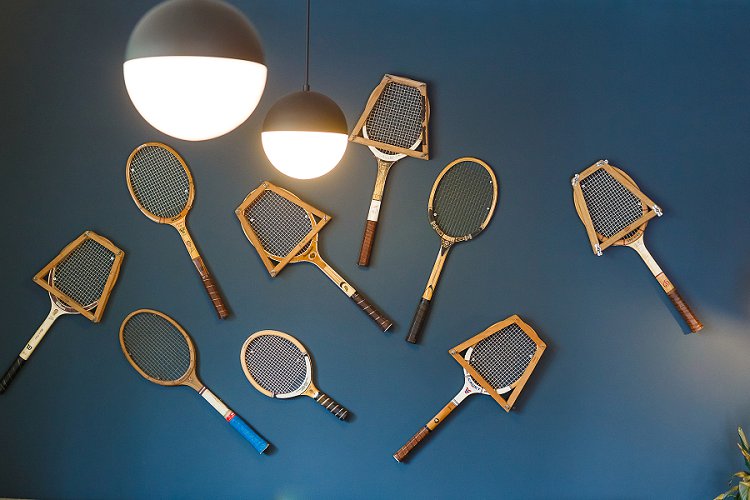 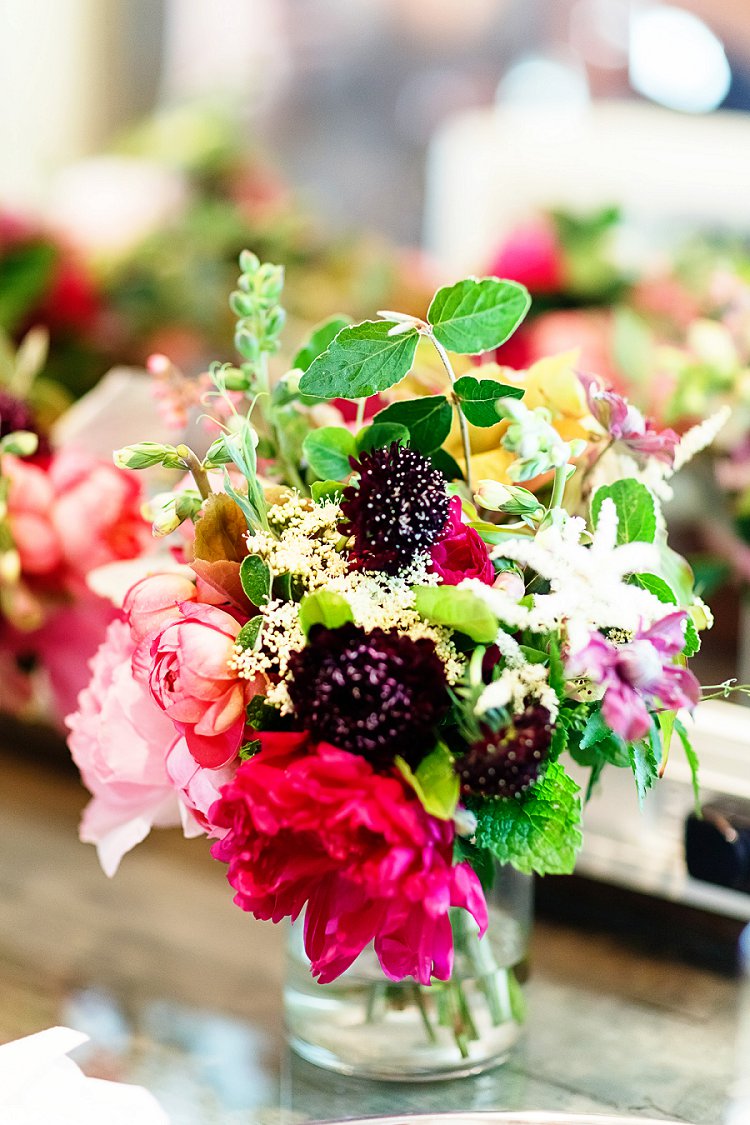 Matt, the groom: Our relationship started as so many do: with Bill Clinton. Freezing in line to see the former President stump for Hillary in the 2008 primaries, I started making fun of Sandra for being short, the surest way to any girl’s heart.

Sandra, the bride: I knew I was in trouble when I bumped into him later that night. I was at a party Matt had invited my friends and me to at his fraternity, and had gone up to the bar to grab a drink. Lo and behold, Matt turned around to serve me. He smiled, and I was smitten.

END_OF_DOCUMENT_TOKEN_TO_BE_REPLACED 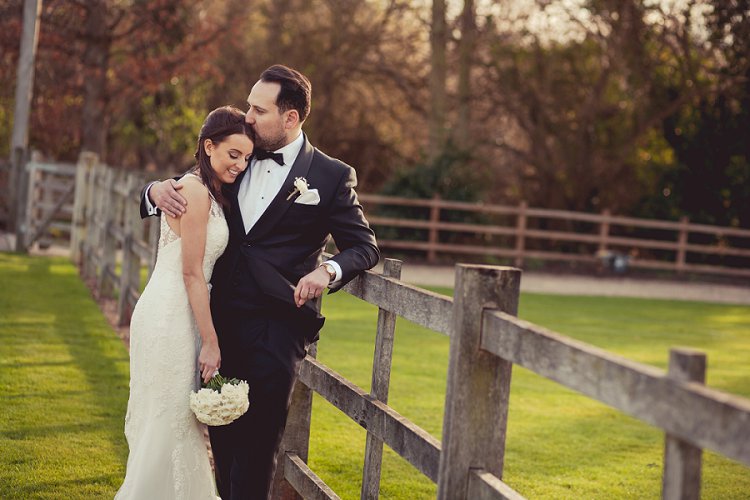 If there’s one thing we’ve learned over the years about Essex couples, it’s that they know how to party – and party is exactly what fun-loving Sammy and Wayne did, with gusto! In fact, they partied so hard to STG Recommended Vendor, Totem‘s, set, that bride Sammy threw caution to the wind, and herself into the arms of her guests, becoming our first crowd-surfing bride!

Sammy, an assistant producer with credits on just about all of your favourite entertainment shows, and Wayne a lettings manager, met as teenagers, and these childhood sweethearts stayed together through thick and thin, tying the knot on their ten-year anniversary.

The pair chose a rustic barn theme, with an abundance of gypsophila and a plethora of twinkling fairy lights, creating an absolutely magical atmosphere.

Sammy looked sensational in her Enzoani gown, and Jenny Packham heels, which she later swapped for embellished, personalized Converse, echoing one of her favorite films, Father of the Bride.

All of the details (including that epic crowd surf) can be seen in much-loved STG Recommended Vendor, Denee Motion‘s, film (below) and the gorgeous images by photographer, Reportage By Limited.

We’ll pass you on to Sammy for the full lowdown on her and Wayne’s special day! 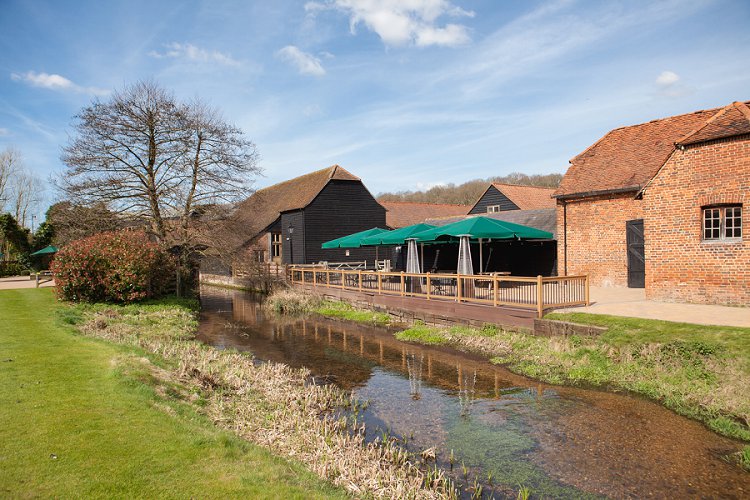 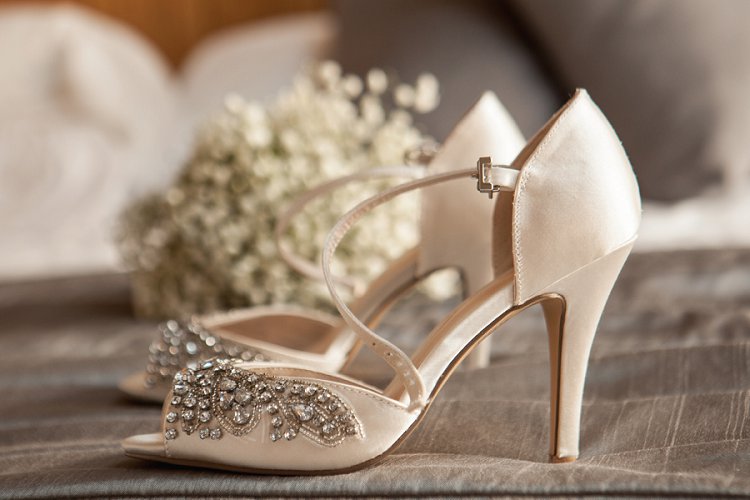 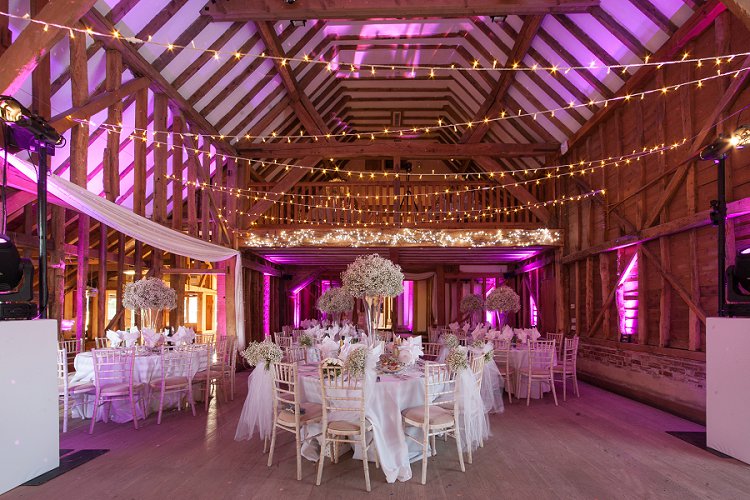 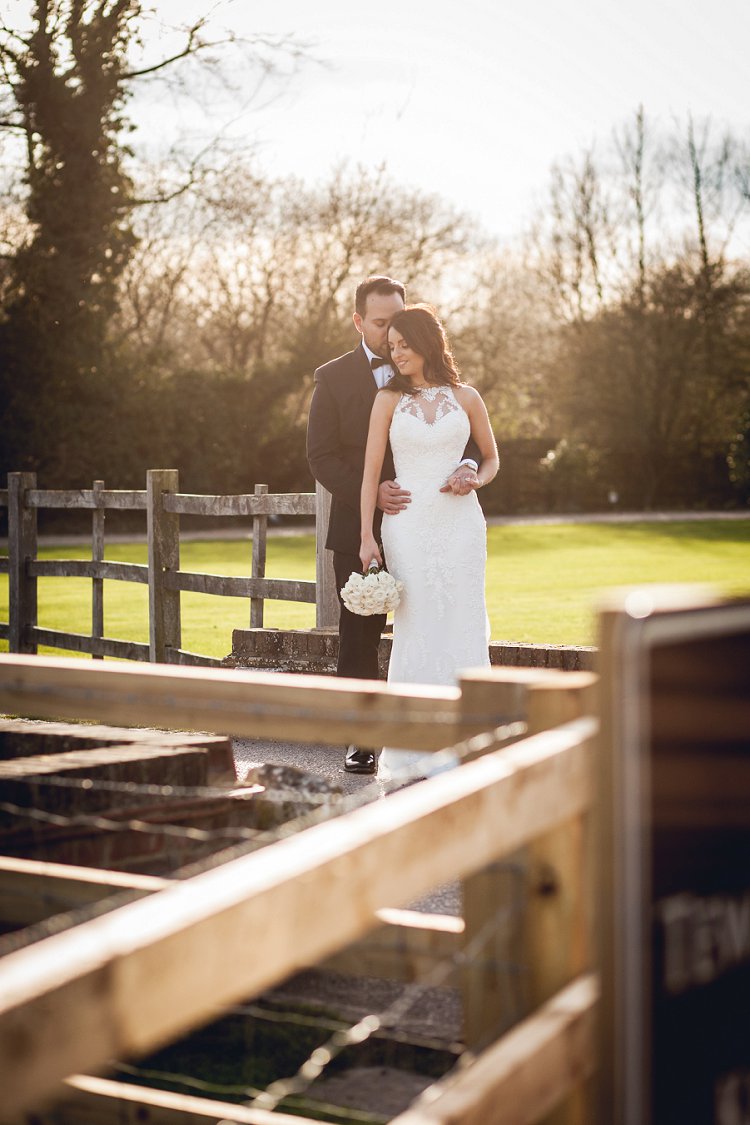 Sammy, the bride: We went to King Solomon High School in Essex, but Wayne was two school years above me and emigrated from South Africa when he was 14 years old. We never spoke at school.

When I was in sixth form and Wayne was on a gap year before university, we met at a mutual friend’s birthday party in a nightclub. We clicked straight away, and went on our first date a week later.

On our first date, we went to a restaurant where we chatted for five hours, we practically got chucked out of the restaurant as we didn’t want the night to end. The rest, as they say, is history.

END_OF_DOCUMENT_TOKEN_TO_BE_REPLACED

New York couple Sophia, a social worker, and Henry, a non-profit professional at a human rights NGO, met at college, on Sophia’s birthday, ten years ago. As it turned out that a boyfriend is for life, not just for birthdays, and, a decade on, the pair made it official!

The couple tied the knot at Shady Lane Farm, a childhood haunt of bride, Sophia. The wedding was adorned with beautiful, laid-back wildflower bouquets, the most woven stunning birch sapling chuppah, with a lovely story behind it and bridesmaids in blush. In fact, the entire wedding was handmade, with friends and family pitching in, in an all-hands-on-deck effort to make everything as beautiful as it turned out to be.

The love and personal details were perfectly reflected in the pictures by A.Fogarty Photography

Over to Sophia for the full story behind her and Henry’s perfect Jewish farm wedding!

Sophia, the bride: We met in college, when we were introduced by two of our closest friends, on Sophia’s birthday! This was ten years ago in March.

END_OF_DOCUMENT_TOKEN_TO_BE_REPLACED 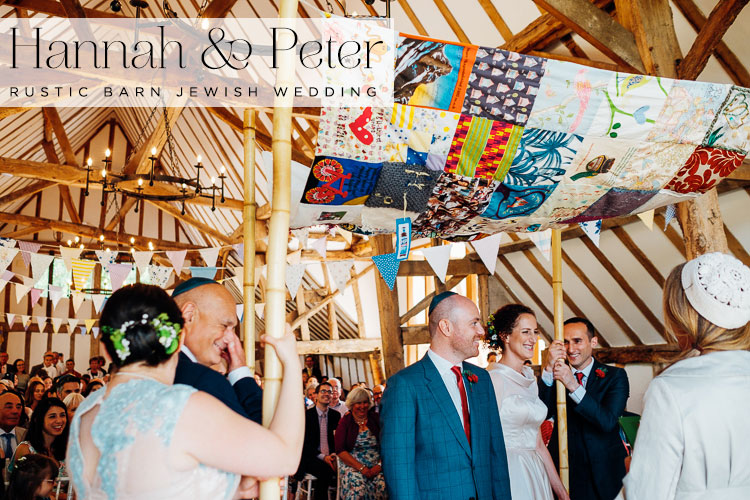 Happy Friday everyone! To celebrate the imminent arrival of the weekend, sit back and enjoy this real wedding, which had such a fantastic party atmosphere that it spilled over into a second party the day after the big day.

Cool and quirky bride, Hannah, looked like a stunning artistic vision with wildflowers in her hair, in her tea-length Fairy Gothmother dress and wow-factor sparkly green Irregular Choice heels.

We love all of the unique ideas that express the couple’s life together, with their many in jokes, including stick-figure illustrated invitations and some special, limited edition, Hannah and Peter Sauce.

A personalised chuppah is always a winner and, in this case, the couple asked their loved ones to contribute a square each to a homemade patchwork chuppah, with their friends and family’s heartfelt wishes watching over them during the ceremony.

The whole story of the day and all of its detail and emotion was expertly captured by photographer Marianne Chau. We’ll hand over to Hannah now for the full report on her and Peter’s rustic barn wedding. Take it away, Hannah!

Hannah, the bride: We met on Jdate, much to our surprise and shock!

We got married at Colville Hall which is an old converted Tudor barn near Hatfield Heath in Essex, UK. There were two barns on the site and we used one for the ceremony and dancing and the other one for dinner. We chose the venue partly because we needed somewhere big enough to fit all of our guests (!) but mainly because we wanted somewhere with character and outdoor space as we were having a summer wedding.

We added a lot of personal touches throughout right from our hand drawn invites to the ceremony to the drinks at the bar which we think gave our wedding a unique ‘Hannah and Peter’ laid-back feel.

END_OF_DOCUMENT_TOKEN_TO_BE_REPLACED 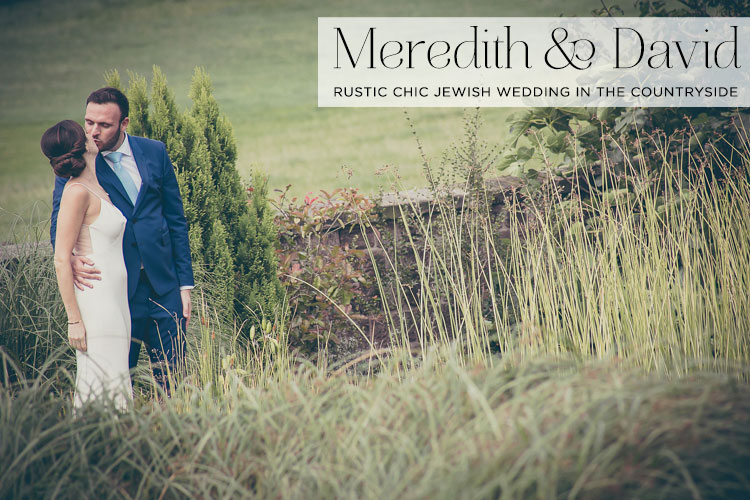 Meredith & David  have got the balance of rustic AND glamorous just right. The combination of gorgeous wild flowers, pastel  tones and personal touches,  alongside the beautiful barn  setting of Heaton House Farm in the  Cheshire  countryside is utterly perfect.

Meredith is American, and David is British but they both live in NYC now, so this is actually a Jewish destination wedding in the UK! Their W Day  is  bursting at the seams with thoughtful details, elegance and fun, like the bride’s sky  high pink Prada heels, a beautiful lopsided wedding cake (read on to hear the story behind that!), a meaningful ceremony,  and girls on roller skates giving out shots at  the after party! F-U-N !

Something that really touched me was hearing about a keychain made by the bridesmaids for Meredith depicting her beloved brother and stepfather who had tragically passed away some years before the wedding. Meredith attached the keychain  to her bouquet for the wedding day itself, and to this day,  carries it on her keys for a  beautiful daily reminder of her  wedding and her brother and stepdad.

Enjoy this sweet treat of a wedding — it’s romantic and whimsical but also sleek and stylish. And looks effortlessly so at that.  All of the  fabulousness was captured by STG regulars,  Reportage Gallery, with the most gorgeous film by Minty Slippers at the end.

Meredith, the Bride: Dave  is British (he’s from Manchester) and I’m American (born and raised in New York) and we  met though a mutual friend. My brother’s friend introduced me to his wife, who is from Manchester. We became friendly and she set me up with dave.  This is really meaningful to us, as Dave never got  to  meet my brother Gregg, who passed away in 2008. In a way, it feels like Gregg brought Dave into my life. Dave reminds me a lot of my brother and having this connection to my brother is very special.