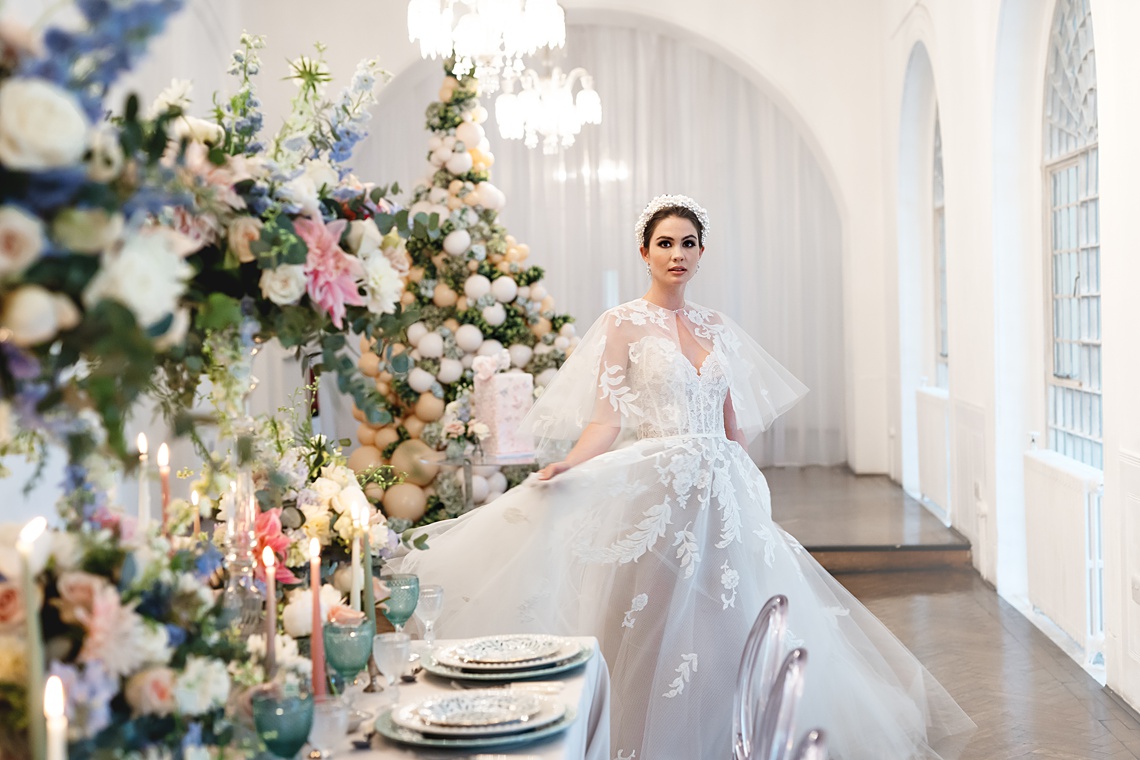 Over the past couple of years, Bridelux Atelier has risen to the very top of my social calendar. I don’t attend many wedding fairs, but I always make time in my schedule for the world’s finest luxury wedding show’s yearly stop in London.

If you’re looking for inspiration and ideas for your wedding, you can’t do any better than to attend their upcoming event at London’s stunning One Marylebone, an 1826 property moments away from Regents Park. Plus, for this season’s event Bridelux is partnering with renowned society magazine Tatler to bring you some truly incredible content  – AND they’re  offering 60 lucky STG readers the chance to attend FREE, either in person or virtually. 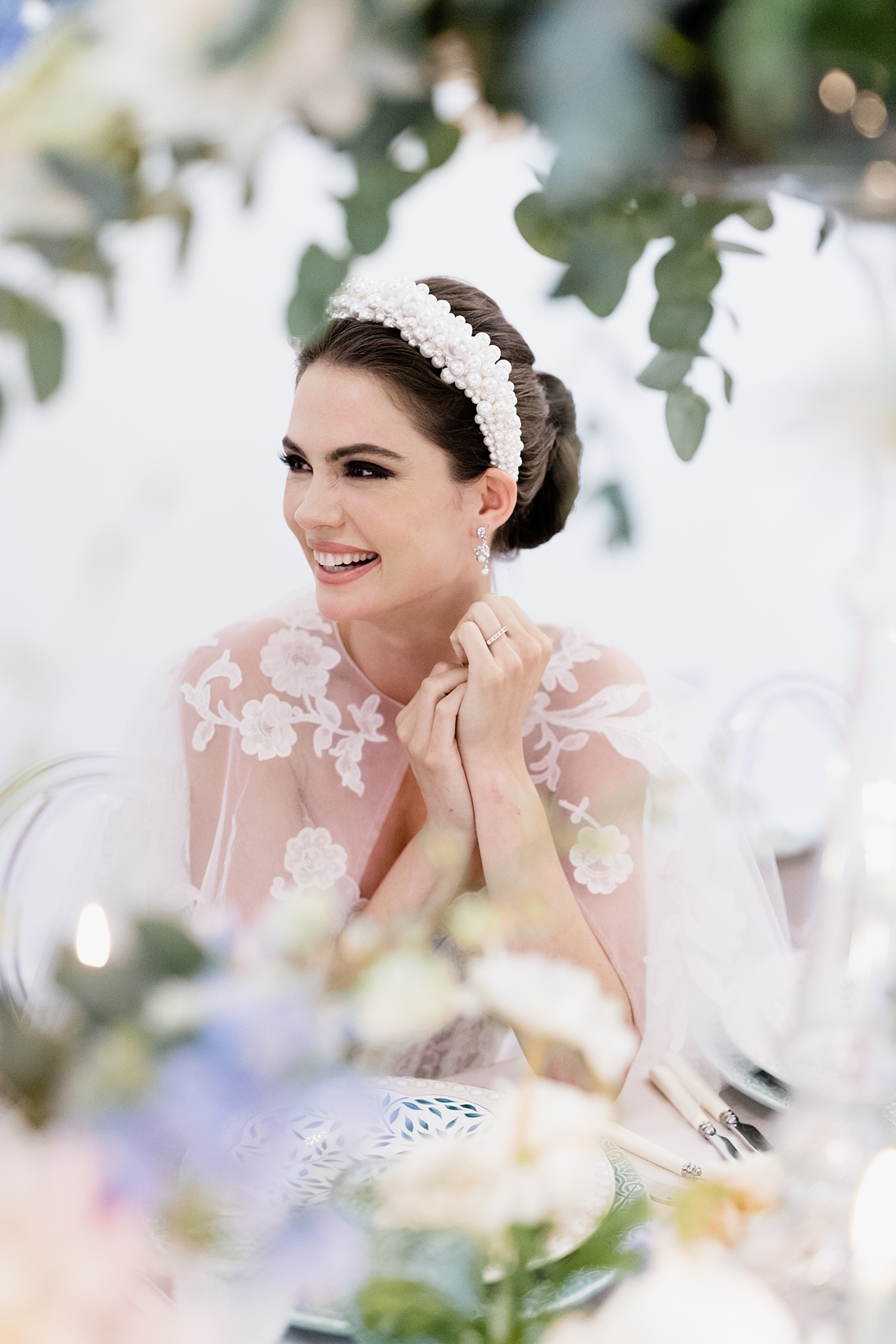 Usually, Bridelux is an in-person event. But this year, due to the coronavirus pandemic, it will be the world’s first ever hybrid wedding fair. So even if you live far from London – or don’t feel comfortable attending indoor events just yet – you can still attend virtually. And whichever way you choose to participate, you’ll be able to fully enjoy all of the fantastic offerings.

And those offerings are pretty amazing. This year at Bridelux, however you choose to attend, you can expect:

END_OF_DOCUMENT_TOKEN_TO_BE_REPLACED

I’m so excited to share with you my latest Facebook Live with Hillary Kener Regelman, Director of National Outreach at JScreen, a US-based not-for-profit at-home education and carrier screening program for Jewish genetic diseases.Jewish genetic screening is SUCH an important topic for every couple thinking of having children, and I’m so glad Hillary was able to help demystify the process.

I admit it isn’t something I knew much about before speaking with Hillary, but after chatting with her I see both how essential testing is to every couple’s family planning process AND how easy and accessible JScreen has made it. They’re on a mission to put genetic screening on every prospective parent’s radar and to clear up the misconceptions so many of us have about the process – and after chatting with Hillary, I’m totally convinced that, as she says, genetic screening should be an essential item on every couple’s wedding checklist.

Hillary started off by explaining exactly what genetic carrier screening is – and isn’t. It’s not a diagnostic test. Rather, JScreen’s testing lets people know if they are healthy carriers of genetic diseases who have mutations that they could pass on to their children.

While genetic screening is sometimes thought of as something relevant only to Ashkenazi Jews, the truth is that everyone planning on having children should get screened, regardless of background (and, as far as Jewish genetic diseases go, there are plenty that affect Sephardi and Mizrahi populations too).

JScreen offers a pan-ethnic panel, testing for all kinds of genetic diseases, not just those common among Jews – so it’s very much worth screening if one or both of you are not ethnically Jewish.

And even if your parents did testing, it’s still important to do it yourself before starting a family, since so many more diseases are testable today than even five years ago (which means that if you yourself were screened a number of years ago, it’s worth considering retesting with JScreen).

END_OF_DOCUMENT_TOKEN_TO_BE_REPLACED 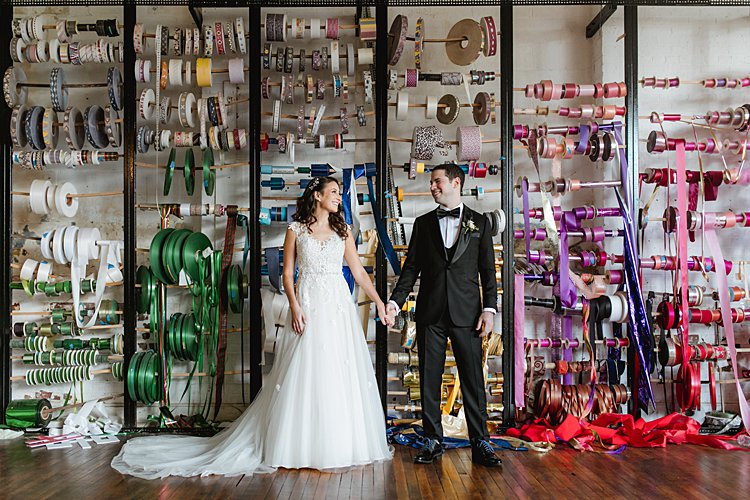 Okay, HOW gorgeous is Avi and Daniel’s birch chuppah?! We adore every detail of the rustic industrial Jewish wedding of Avi, a pediatric audiologist, and Daniel, who works in real estate, but this chuppah really takes the (wedding) cake. Artfully adorned with occasional pops of red, white, and pink flowers plus hanging greenery – and covered with family tallitot – we’re totally in love with the overall effect.

The chuppah was the perfect fit for Avi and Daniel’s super cool venue, the Art Factory in Paterson, New Jersey. We love the eclectic warehouse vibe, the big windows and abundant natural light, and even comes with its own prop room! These two dressed the space up perfectly with giant paper flowers, vintage sewing machines, and all kinds of other awesome touches. We’re loving every single detail in Amy Sims’ wonderful photos, and Smashing The Glass Recommended Vendor Kiss the Bride Films’ trailer is so full of emotion and love – pure perfection!

And how special is it that the couple’s beautiful navy paper cut ketubah was crafted by the groom’s mother?! She designed and calligraphed it from start to finish, all by hand.

We’ll let Avi, who looked so lovely in Maggie Sottero, tell you about the rest… 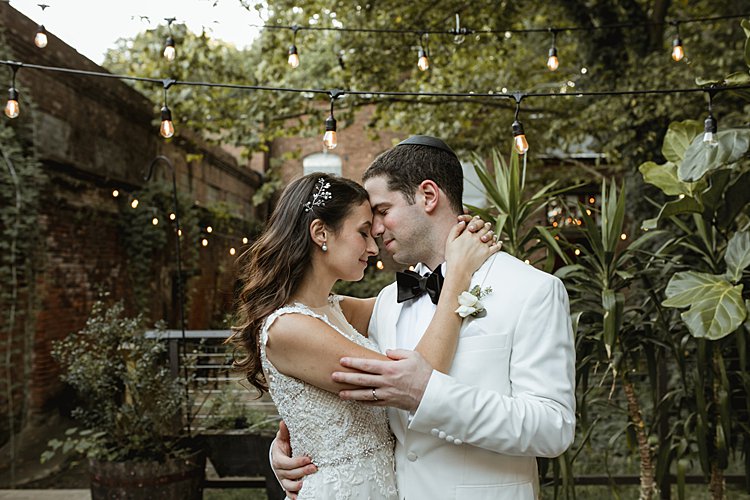 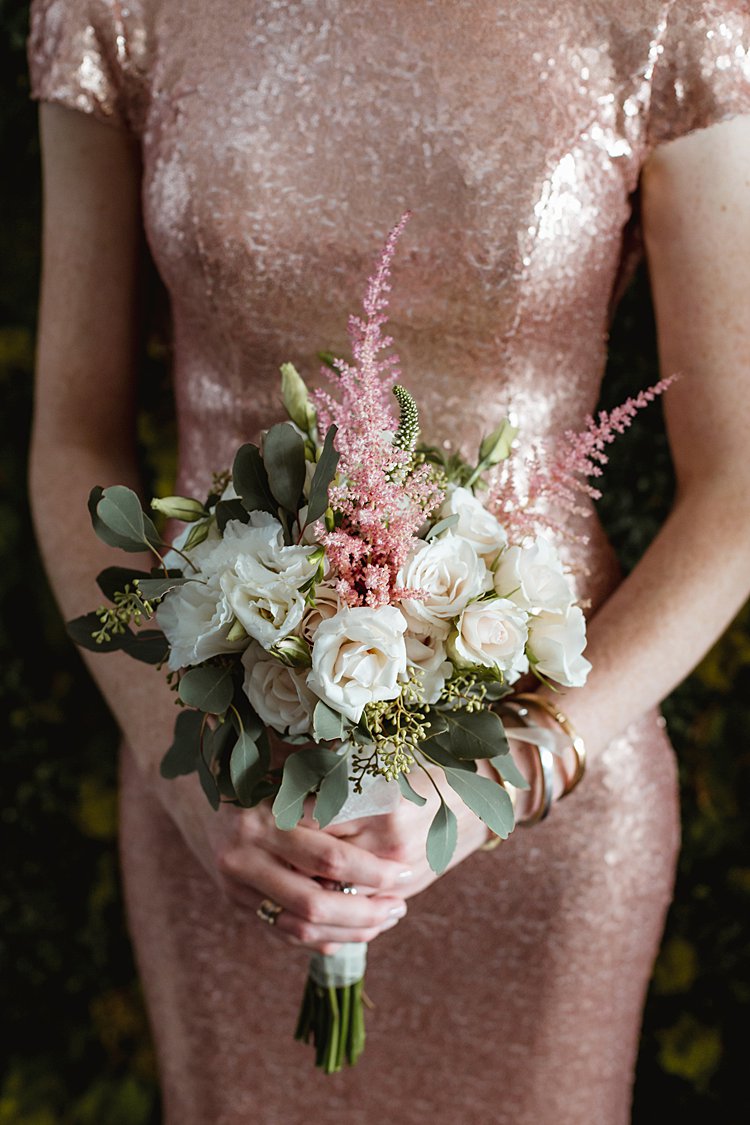 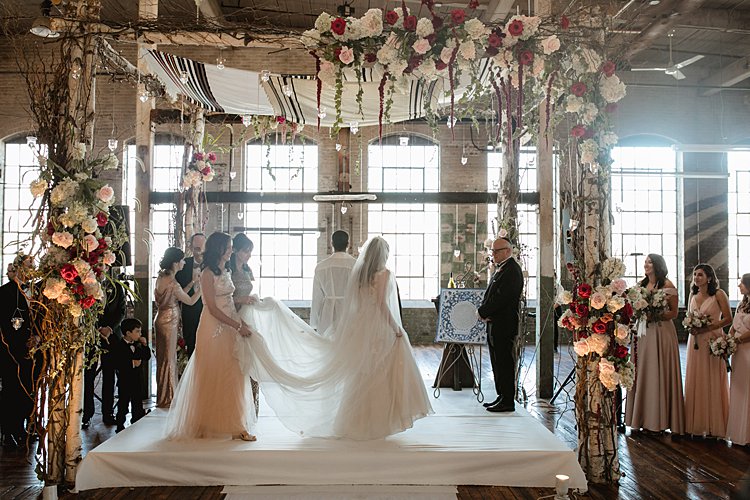 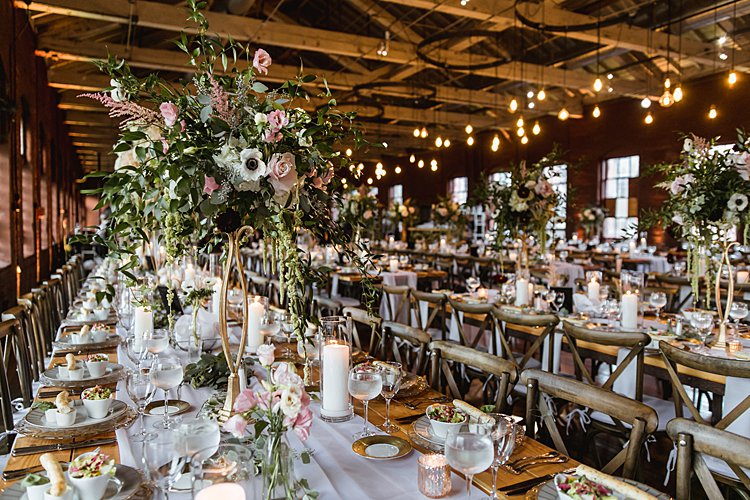 We got married at the Art Factory in Paterson, New Jersey. It has a very eclectic warehouse vibe, and you can use the entire space however you want, using their prop room or bringing in whatever materials you want. This made our celebration so personalized because the space was completely naked and we decorated how we wanted to.  END_OF_DOCUMENT_TOKEN_TO_BE_REPLACED 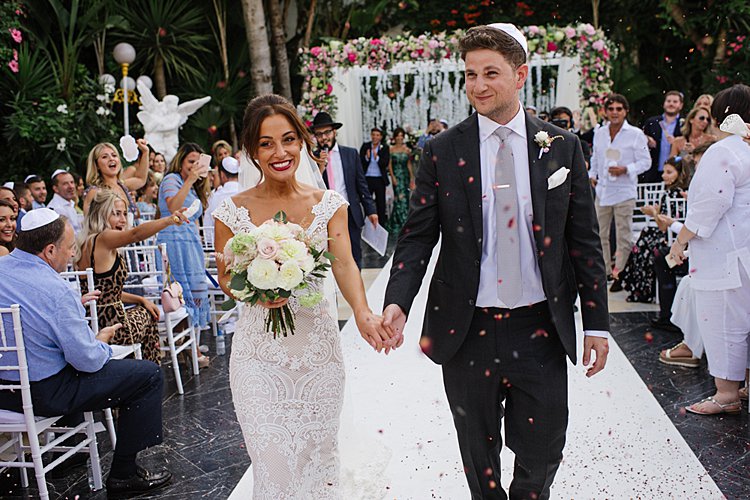 This news has Team STG almost as excited as Olivia and Paul after they smashed the glass! Olivia found her STUNNING Gemy Maalouf gown at Mirror Mirror, which reopens 4 July

As lockdown regulations loosen throughout the UK, we’re reaching an exciting milestone for the wedding world: bridal boutiques are starting to reopen! Over the next month, some of London’s very finest – including Morgan Davies Bridal, Katya Katya, The Wedding Club, Andrea Hawkes, and Mirror Mirror – will start seeing brides for in-person appointments again for the first time in months, and we are ready for it!

The experience will look a little different than before – like most places these days you can expect plenty of masks, gloves, hand sanitizer, and social distancing measures, and boutiques are taking a variety of extra safety measures including the following:

But one thing’s going to be just the same, and that’s the absolute magic of finding the dress of your dreams. That, and the absolutely above and beyond service all of these wonderful shops provide for each and every bride. Read on for the details.

END_OF_DOCUMENT_TOKEN_TO_BE_REPLACED

I’m so excited to share with you my latest Facebook Live with the incredible luxury wedding planner Michelle Jacobs of Elegante by Michelle J. Based in London with a focus on destination weddings and wedding weekends, Michelle is truly one of the best when it comes to working with Jewish and Jew-ish couples to craft standout wedding experiences (and is a favourite among STG brides!), and I was lucky to be able to chat with her at The Wedding Gallery in Central London about ways to make your wedding pop while at the same time keeping everything accessible for guests.

Michelle is just so full of wedding wisdom, and if you’re working to create a one-of-a-kind, ultra-memorable day everyone will enjoy (and honestly, who isn’t?), this Live is 100% worth your time. Starting with the premise that happy guests are what make or break a wedding’s atmosphere, Michelle’s got tips that apply to weddings of any budget and style. 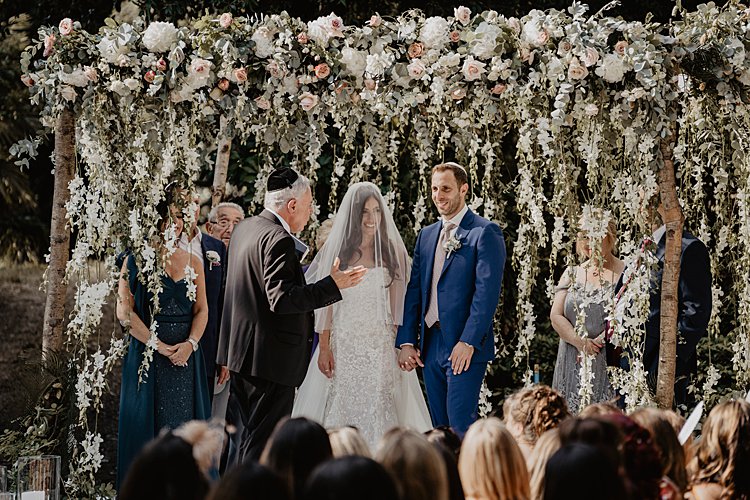 We started off by chatting about how you can make sure your guests have a fantastic experience at your wedding from start to finish. This starts from the moment you send out those invites: pumping your guests up for your big day is step 1 to creating a killer atmosphere on the day.

How to do it? First off, if you’re getting married somewhere far off or out of the way, make sure they know how to get there and what kind of arrangements you’ve made to help get them home (or back to their hotels) at the end of the night.

Second, if you have guests who may not have attended a Jewish wedding before, make sure to keep things accessible for them. Creating a wedding program outlining and explaining the elements of the ceremony is a wonderful way to do this. It’s also thoughtful to let guests know in advance about anything that might catch them off guard, like if they’ll be asked to wear kipper, or if you’ll be having separate dancing or separate seating for the ceremony.

Another type of guest who might need some special looking after? Anyone attending alone who doesn’t know any of the other guests. One idea is to assign a group of people to take care of your solo guests on the day (and seat them all together); another is to start a Facebook group for your guests in advance of the big day so they can get to know each other a bit beforehand!