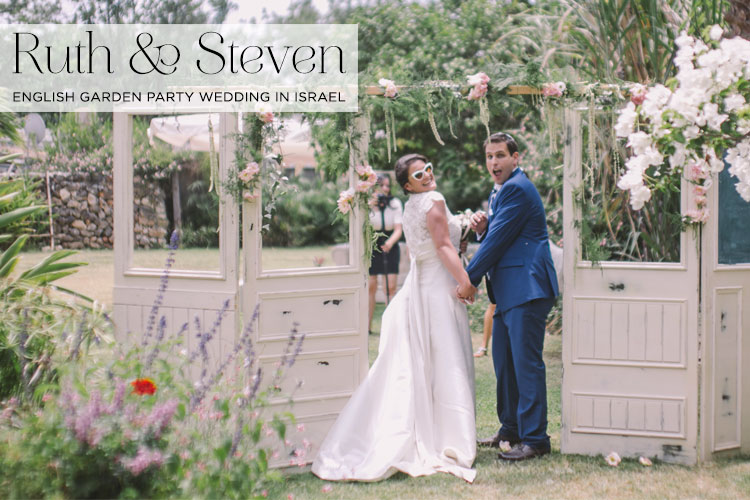 I absolutely adore the sunshine and fun factor of Israeli weddings but they very rarely incorporate quintessentially British traditions like afternoon tea and scones, finger sandwiches, croquet, and (well it’s not quite an english tradition, but) a barbershop quartet!

Ruth and Steven’s phenomenally different Israeli wedding contained all of these lovely ideas and more. In fact, the barbershop singing comes courtesy of the groom who not only sang his bride down the aisle, he also proposed to her with a song he composed and arranged with his barbershop quartet. You must make time to watch it — Steven’s proposal to Ruth is one of the best I’ve seen in a LONG time!

Ruth and Steven’s entire wedding is full of fun-filled, warm, homely details which you will want to replicate. I particularly love the ’round’ chuppah – something I’ve never seen before – and the ketubah, designed and created by Steven’s mother, who picked and dried all the flowers from close to where the couple live to create the most exquisitely beautiful ketubah.

Ruth is a Smashing The Glass reader and she told me that the STG pages were a massive source of inspiration during her planning process. So now, Ruth is here to ‘pay it forward’.

Let’s join the party and enjoy not only her story, but all of the beautiful images from the very talented Dima Vazinovich, together with the heart-warming wedding film at the end of the post by the wonderful Tzachi Asher.

Ruth, the Bride: Long story short, we met through friends – but when Steven came into my flat (brought by said friend) and saw my 3,000 piece puzzle and sat down and immediately found pieces to fit, I had to know more! To say love at first sight is a bit much but definitely intrigued…

An English atmosphere with an Israeli flavour

Being English and a little bit of an out-of-the-box thinker, I was very adamant that my wedding did not look like everyone else’s. Although we chose to have our wedding in Israel, I still wanted to portray some English country garden elegance

I had always dreamed of getting married at home so wanted that homely feel so the first mission was to find the venue; after hunting high and low we found a villa that rented out its garden and I knew from the second I saw it that this was the place.

We always liked the idea of a “vintage-chic” theme with an English country garden twist. We needed a planner since the venue was a ‘blank canvas’ and needed to bring in everything (including toilets!) and we worked with Michal at Events Israel

Our colours were based around peach/orange but we weren’t so strict with it – just not pink!

Since Steven and I were not seeing each other till the wedding itself, we had to incorporate a way of splitting an open garden and creating a ‘screen of sorts’ – I always love vintage doors and as soon as I saw the space had the idea to incorporate that. Our designers, Mint Design, did a great job sourcing a gorgeous door that helped create a bridal area for me away from the main reception. 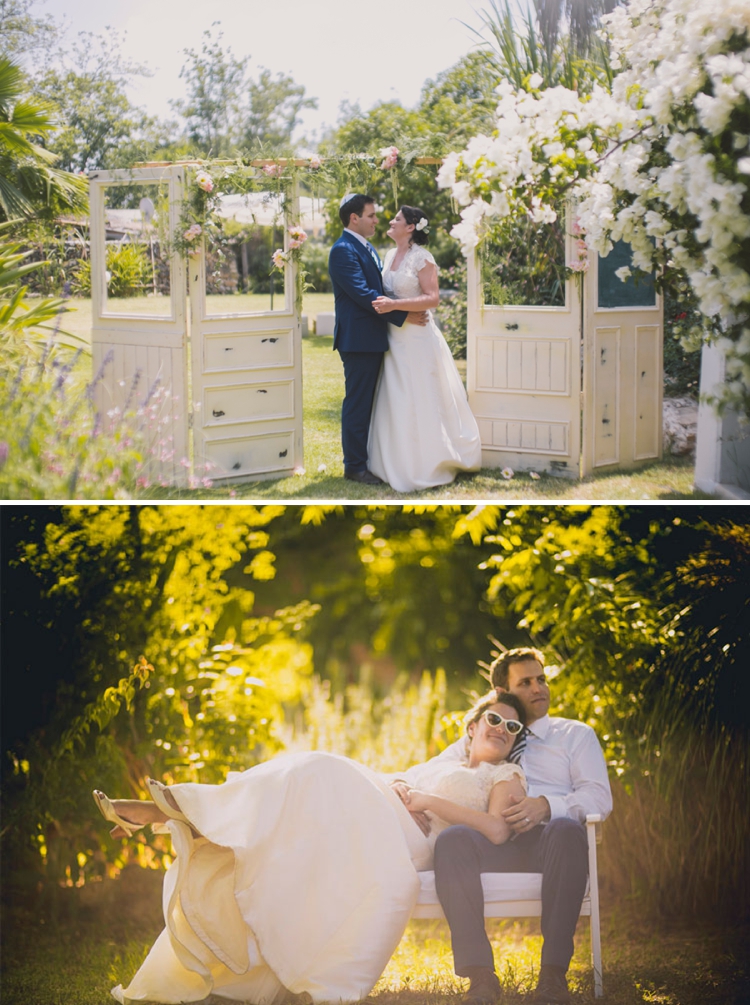 For the invitation, we wanted to incorporate the garden feel. The venue had amazing gates so we came up with the idea of opening the gates into the garden for the invitation. Then the designer tied them up with a little key. There was big discussion about the raise of the cost of the invitation by adding the key – but everyone commented on how special it made them and gave a really good impression for how the wedding will be. 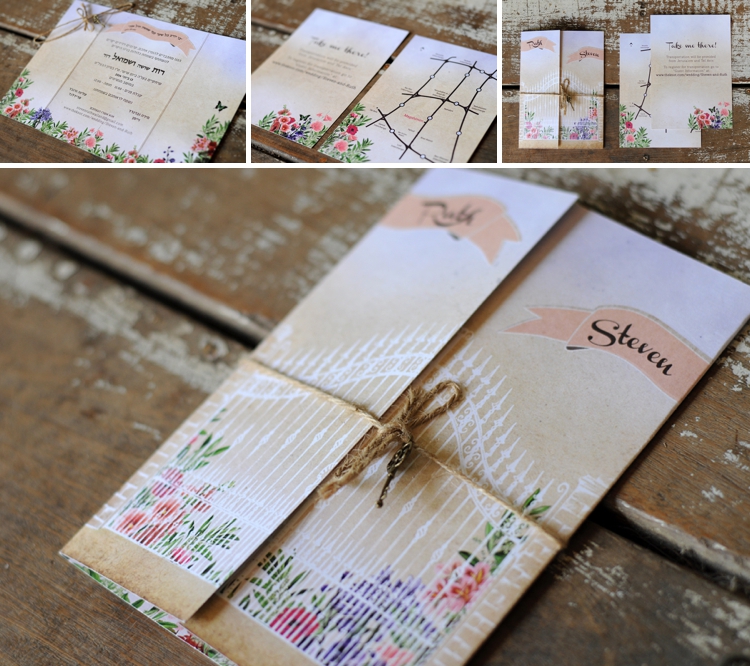 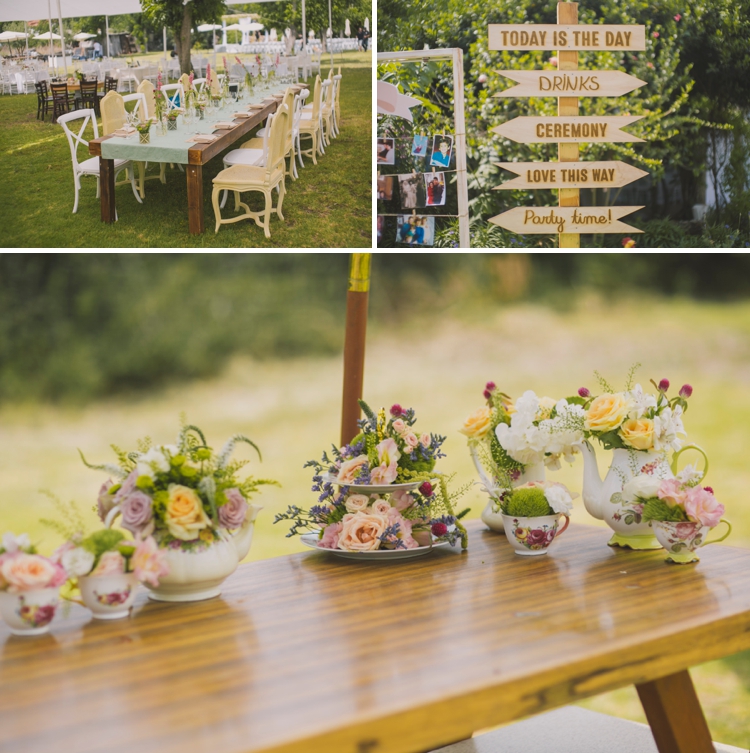 I looked in Israel for a while but it just wasn’t the same wedding dress shopping without my mother. Then it just so happened that during a short weekend trip to London a few months before the wedding there was a sale on at Browns Bride. After waiting in line for about 2 hours, we finally got inside the store – nothing like THAT friends episode, but much more refined and “British” with us all waiting in line for each other.

I tried on two dresses – and we bought the second by Peter Langner. It was strapless but we found a lace bolero at the same time that matched in colour and were able to find a good seamstress in Israel to connect them – I was super adamant that I didn’t want it looking like two pieces attached and everyone said we managed that! 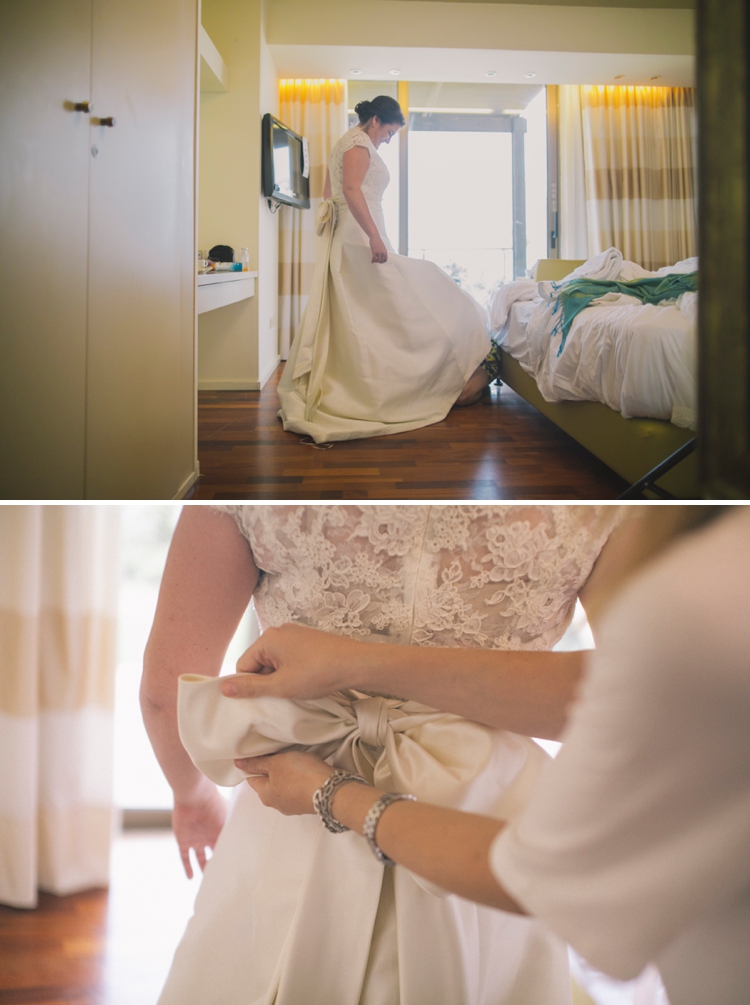 I wore a bracelet and necklace that I found at Keren Wolf, and I had bought a hairpiece but the lady doing my hair decided that a real flower would be better so we had an orchid prepared by the florist in the hotel where I got ready – I loved it! In hindsight though, I may have thought about this better – the flower ended up being torn and I had to remove it half way through the day.

By far my favourite accessory (and I knew I needed a pair of these for a daytime wedding) was a pair of statement sunglasses! – I found the perfect pair of Miu Miu white cat’s eyes sunglasses that I LOVE! 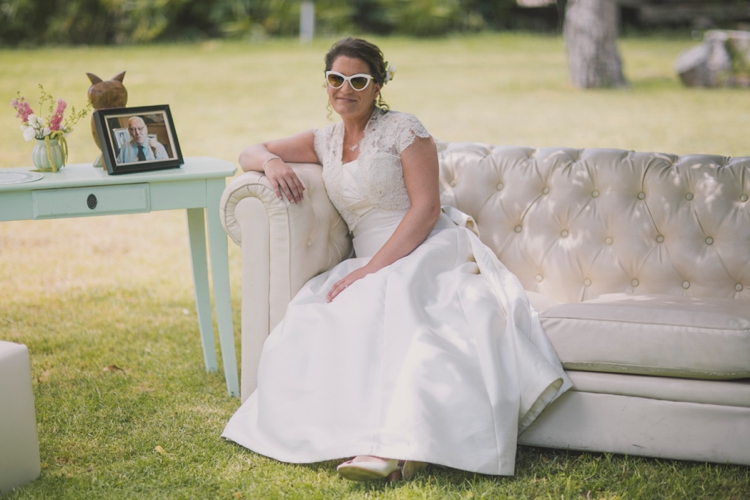 I don’t do heels very well and since we had a garden wedding I needed not too much of a heel. I also wanted a little splash of colour but to still stay quite traditional. I found a shoe boutique selling Israeli designers close to where I live in Tel Aviv and fell in love with a number of shoes there and it has become my favourite shoe shop now – B.Unique. 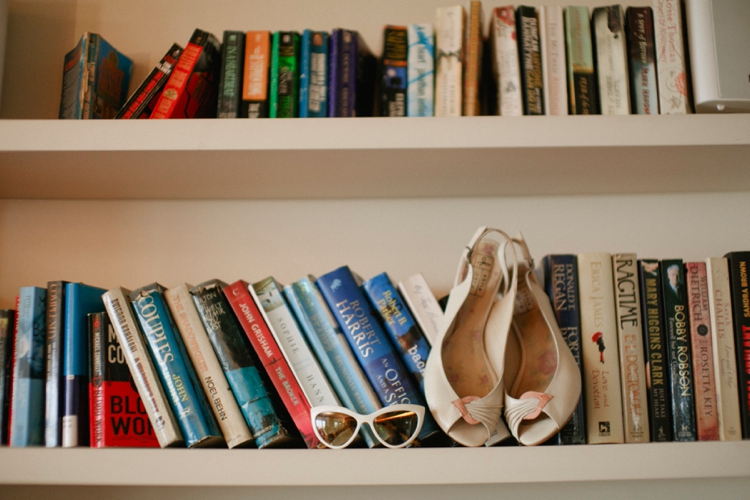 Again, since we decided on a daytime wedding, I needed something that wasn’t going to sweat away or be “too much”. I was a little scared to go with an Israeli style of make up so was happy to find Jaquelyn Mowsowski Lawrence – a South African living in Israel for ages, who knew both a non-Israeli style and to combat the weather here. Jaqui was quick to recommend the lovely Karmit who she works with to do hair and I clicked with them immediately. 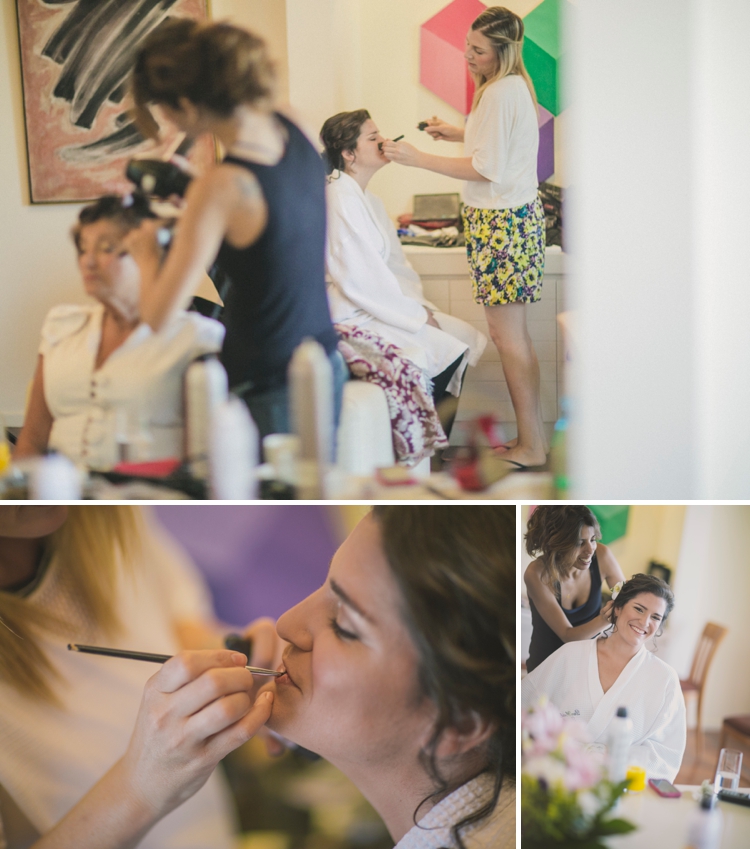 I gave Steven the choice of tan or royal blue for his suit. Royal blue worked amazingly in the photos and really popped, especially with his gorgeous blue eyes. 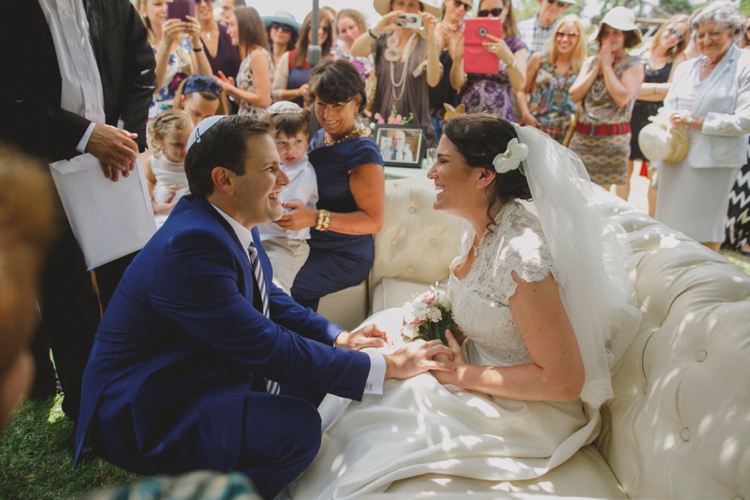 In Israel, it is not as traditional as in the UK to have adult bridesmaids, so we stuck with the little ones (who were a little shy on the day but totally stunning!!) I wanted to incorporate the peach/orange theme so the girls had sashes on their dresses and my sister made my little adorable nephew an amazing bow tie in the colour theme that he LOVED! 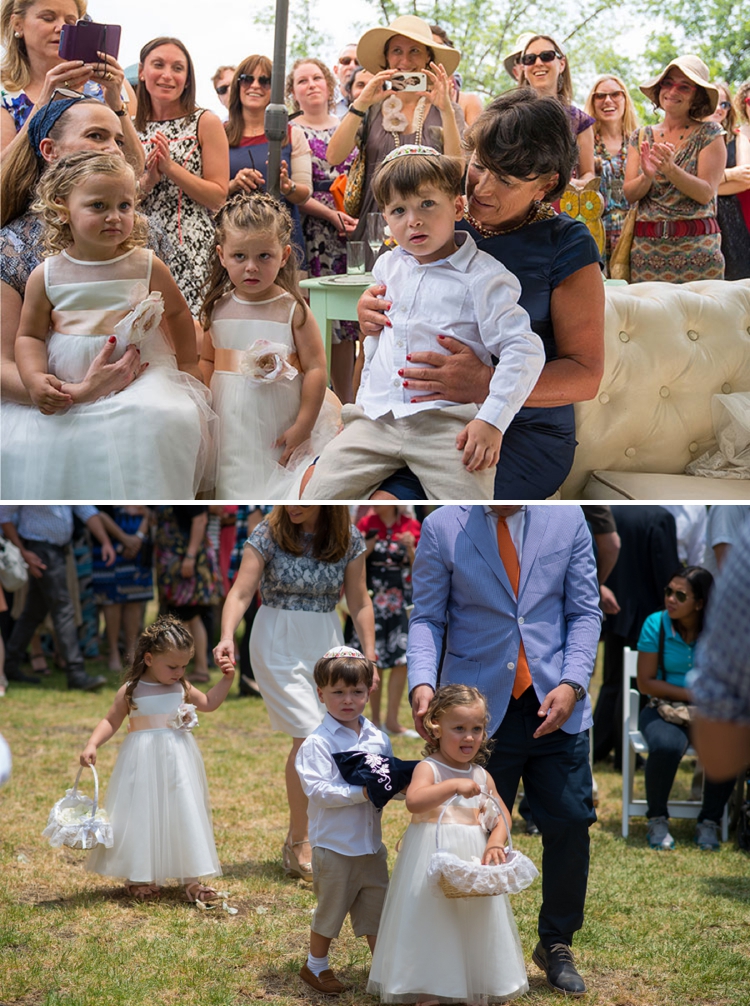 The Rabbi marrying us was my mothers cousin – since my grandfather couldn’t make it and he knows I am named after my maternal grandmother, he mentioned both which was very special to me. We invited a family friend rabbi of Steven’s to say some words in English. Our chuppah made our ceremony that much more special and Steven sung me down the aisle.

Steven sings so I really wanted to make the most of that – I taught him my favourite tune of Eshet Chayil, which he sang me down the aisle to, harmonised by his father – I am told that it was very special for everyone to hear and see.

Steven actually initially came up with the idea of a round chuppah – we initially wanted it to be hanging from the trees suspended, but logistically ended up too difficult so our designers found a good enough option and we still felt a halo hovering over us.

I loved everything about Dima Vazinovich and as soon as we told him our venue, his reaction was “I love that place”. Then I knew for sure that he was for us. 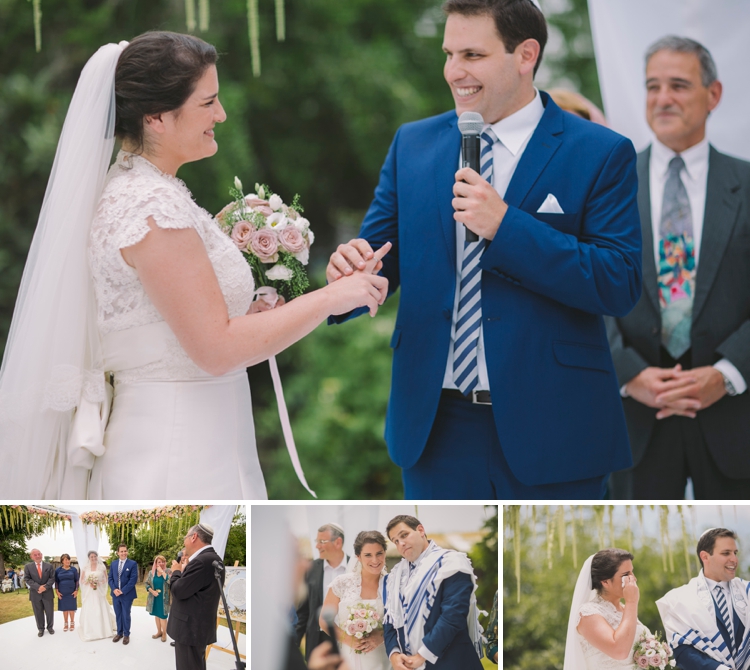 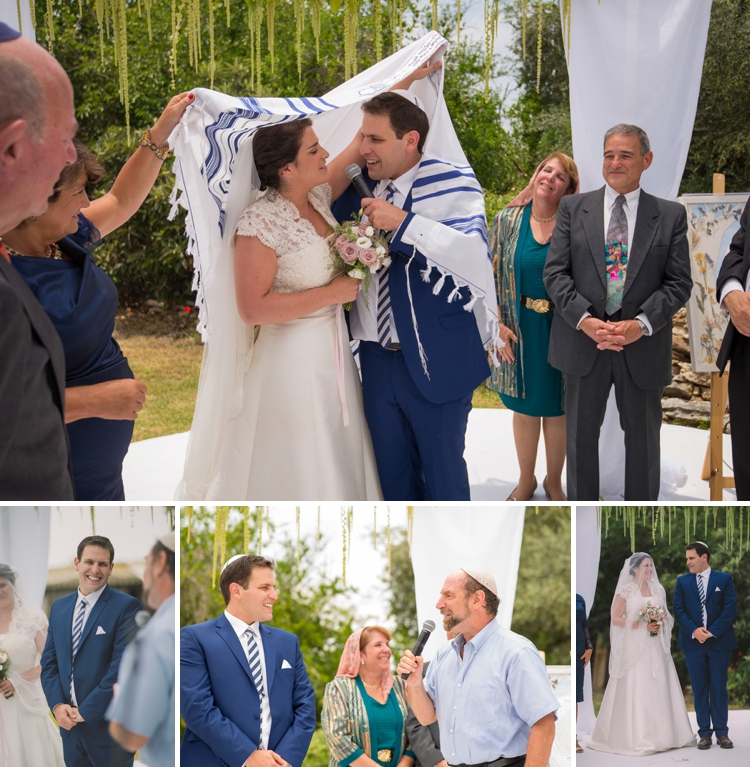 a dixie swing band, a barbershop quartet, croquet, and a photobooth

The venue were quite strict on decibels but it didn’t matter too much to us. For the reception we found a dixie swing band – no amps and moveable (they could “march” steven down the aisle and us away from the chuppah) – New Orleans style upbeat dixie blues definitely gets the foot tapping.

Steven’s father also sings in a Barbershop ensemble so they prepared a sweet song for us, then Steven sang with his quartet.

My father said a short few words, there was croquet set out for reception to add another English element, and a photobooth also added an amusing entertaining corner. 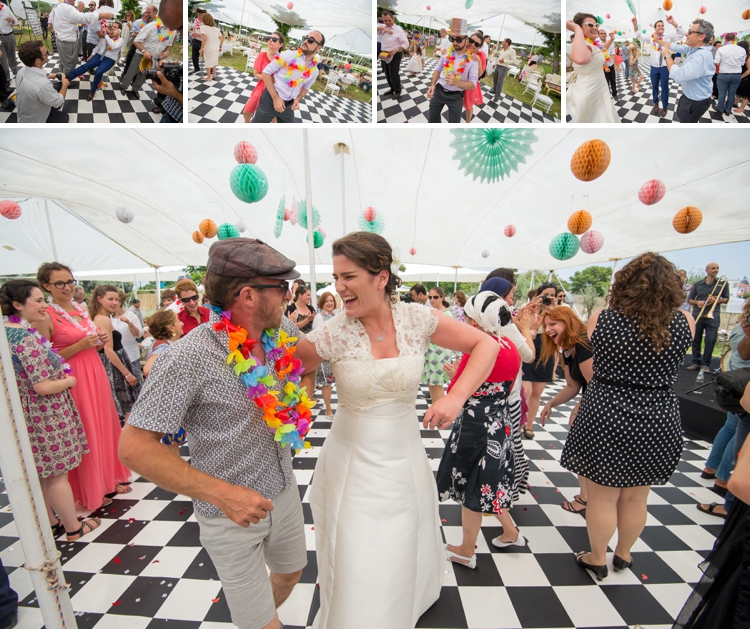 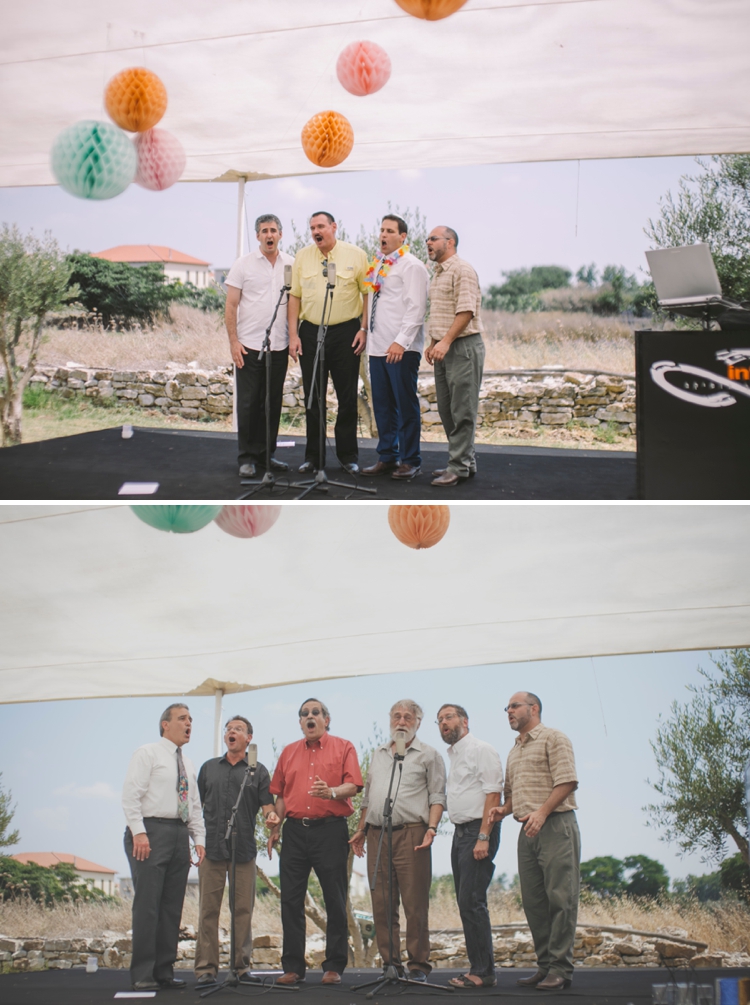 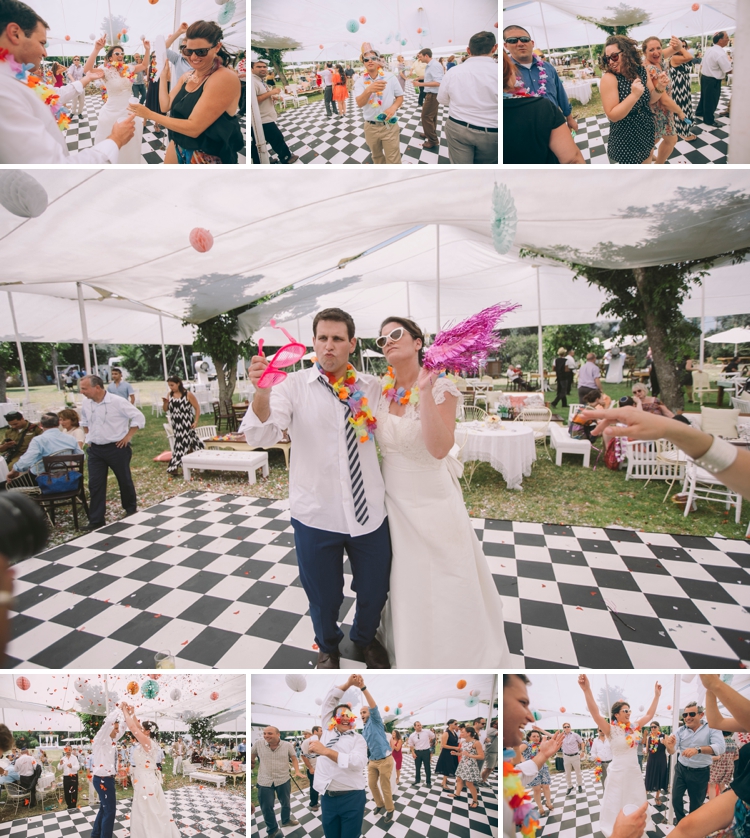 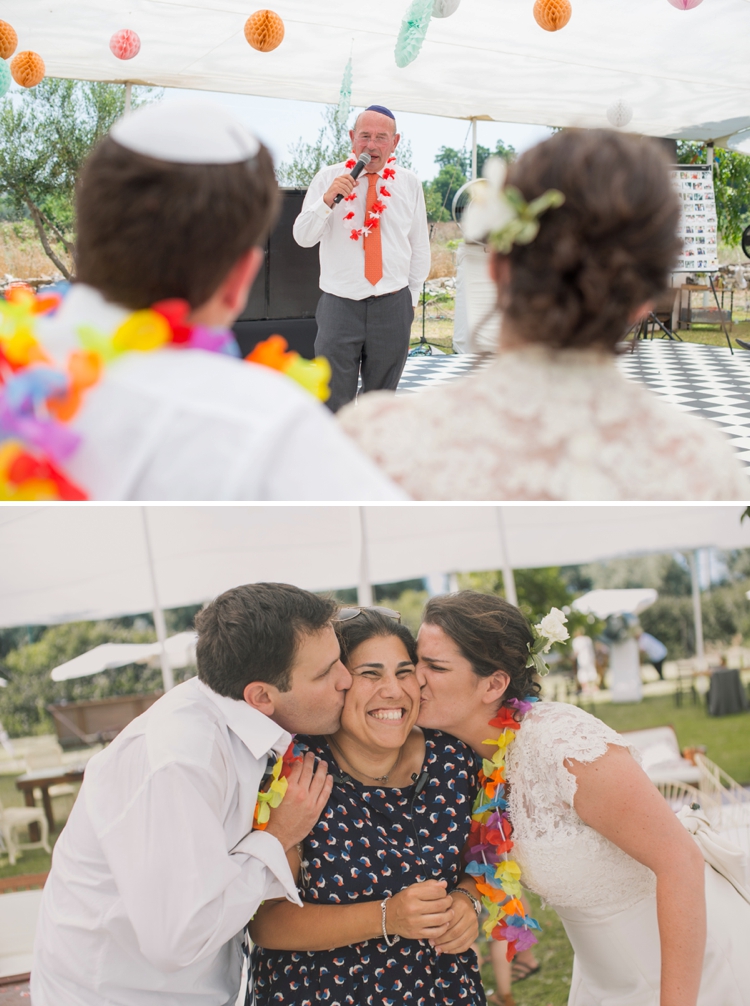 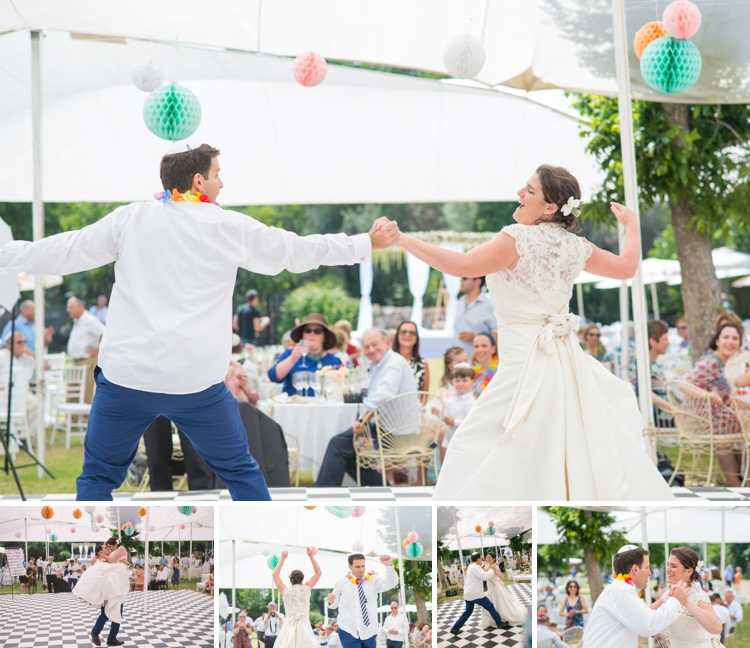 It is a Jewish tradition to not see one another for a week before the wedding. Being that we were sort of sharing a place already, we realised that this was a good idea. Creating a wedding in a blank canvas venue really took a lot of coordination and plenty of stress so being apart from one another that week and being able to spend time individually with our families alone before marriage was truly special and something that I’d advise for any couples no matter the level of religiousness you are.