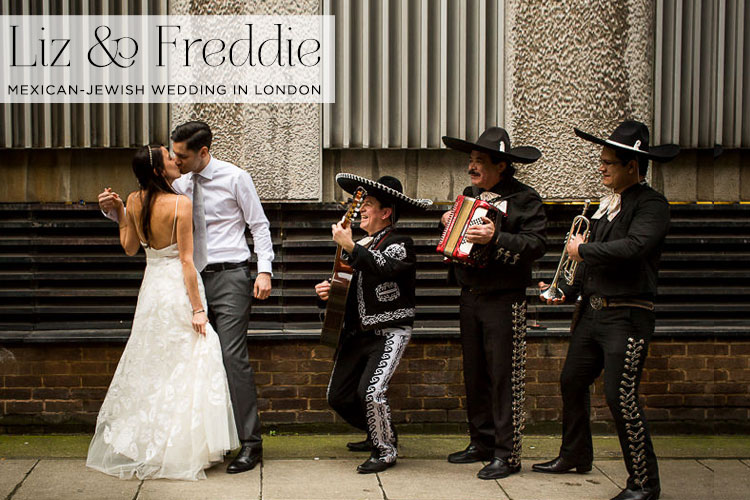 Choosing to get married in Knightsbridge, London

We got married at Searcys at 30 Pavilion Road in Knightsbridge on 17th January 2016. We chose this venue as Freddie and his family used to live less than 100 yards away. As Freddie’s mum mentioned in her speech it felt like coming home…

Our wedding theme was a Mexican- Jewish wedding and it was all organised by Freddie’s mum Paula and his sister Sophie.

Our invitation was quirky with a mixture of fonts, a bowler hat and a sombrero.

I wanted a very simple classic look and after a number of makeup trials my sister helped me as she knew exactly what I wanted.

My bridesmaids were my sister and sister in law and my flower girl was Freddie’s niece. They all wore lovely blue dresses and all the male members of the family wore Hermà¨s ties in various shades of blue to complement the bridesmaid’s dresses. 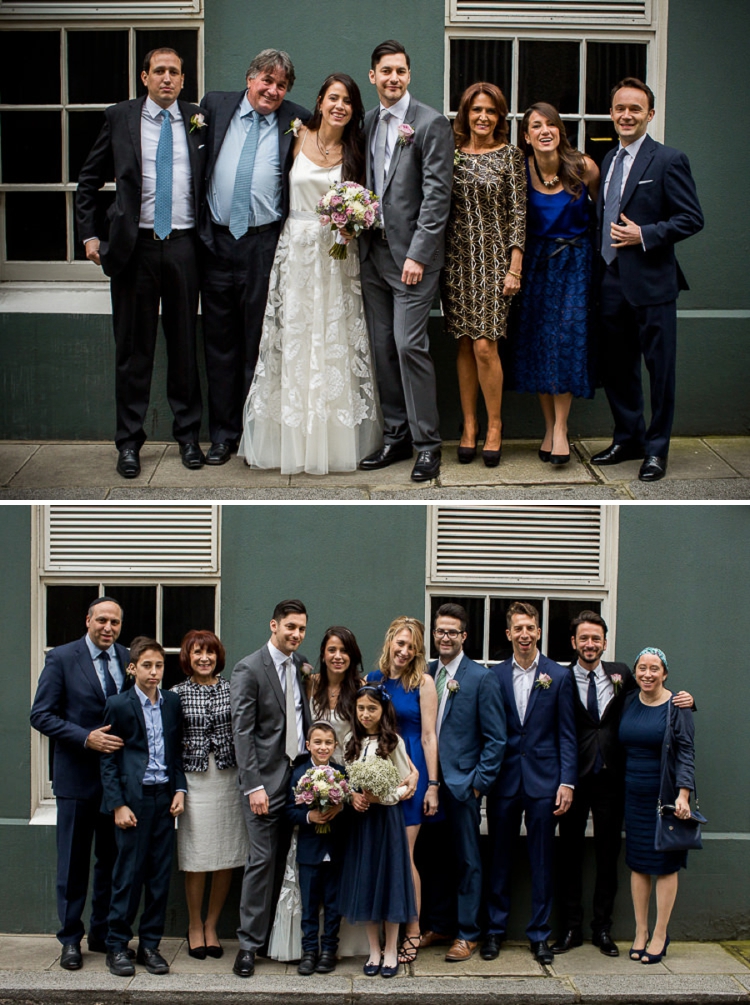 My beautiful dress came from Halfpenny London. It was utterly unique with a full length hand embroidered  tulle skirt in taffeta with a silk cami top.  The inspiration came from the dress worn by Olivia Palermo on her wedding day.

I complimented my dress with some beautiful jewellery given to me by my two grandmothers who sadly were not present.

As far as shoes were concerned I wore high ivory stilettos (as Freddie is really tall) and later changed into ivory Converse to ensure I was comfortable later on. 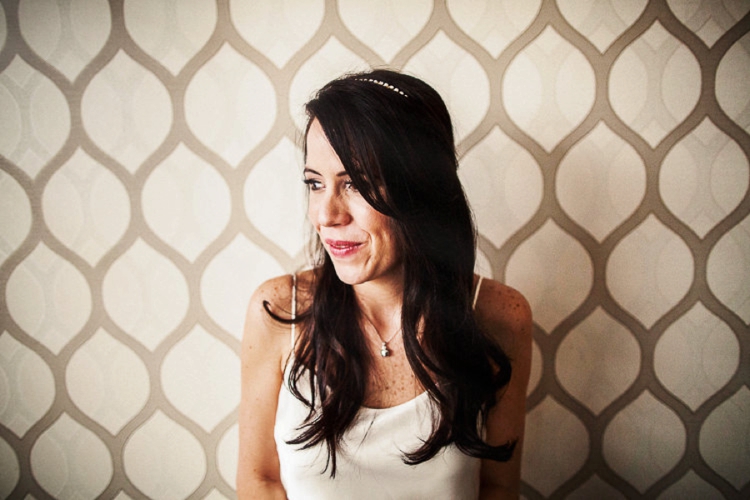 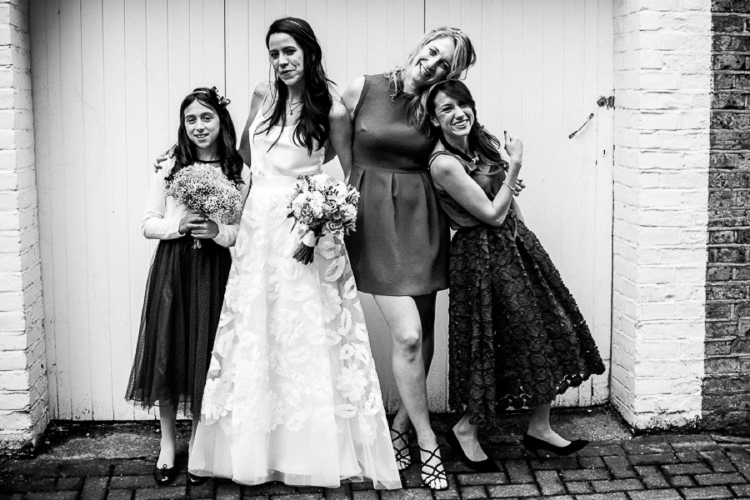 We had a solo singer, Maria Jordan, performing a laid back repertoire of songs such as Everlasting Love, What Can I Do, and Ho Hey to welcome the guests before the ceremony during our champagne reception.

Our two registrars were wonderful and bought a lot character to the ceremony by taking their time to be engaging with the room. Freddie’s brother’s partner read a poem called “on your wedding day” which was very special. Two stand out parts for me were walking down the aisle with my dad to Sunrise and the shouts of mazel tov from the guests at the end of the ceremony!

After the ceremony we walked out to Let There Be Love (the Nat King Cole version sang by Maria).

This was Maria’s first wedding singing Jewish songs which she learned through studying YouTube videos we sent her. A few friends have asked for her details as they thought she was a seasoned pro with the Jewish songs. She sang them incredibly. 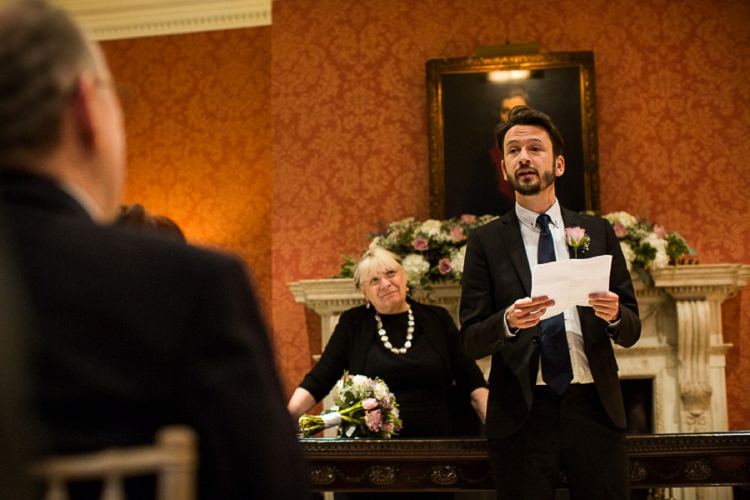 The florist was Gingerlily Flowers and the flowers used were memory lane roses, white hydrangea, gypsophila and lilac limonium. The bridal bouquet was roses, hydrangea and freesia.

In addition the florist work together with the caterer to decorate the wedding cake with a floral decoration. 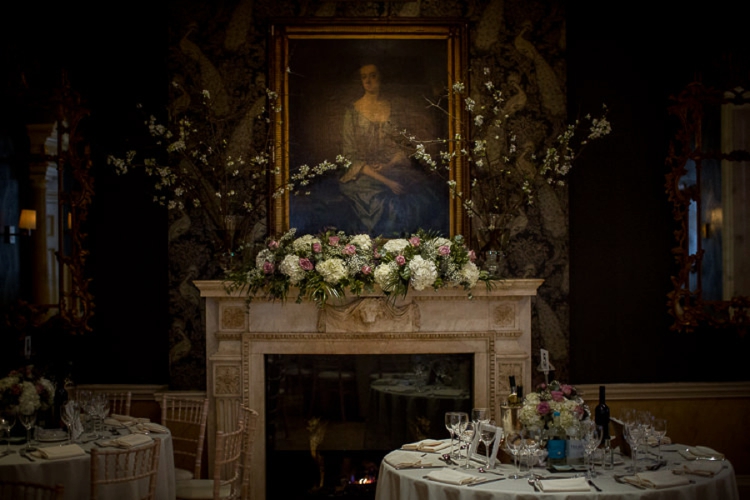 Our wedding was catered by Philip Small who put on a Sunday Roast style buffet. We had a large selection of mains and sides and Phillip was a delight to work with from start  to finish — he helped us plan the whole schedule of the day! 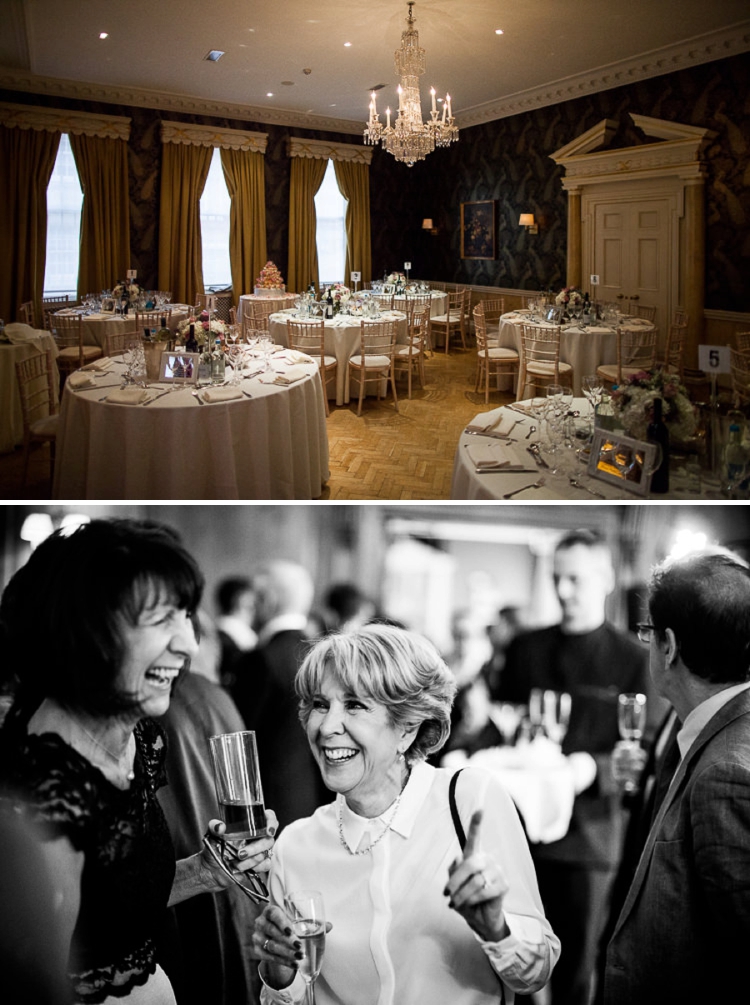 Our cake was made up of three layers; red velvet, vanilla and chocolate. We knew we didn’t want three layers of the same filling and Phillip suggested these combinations. We opted for a very simple design with a floral decoration. 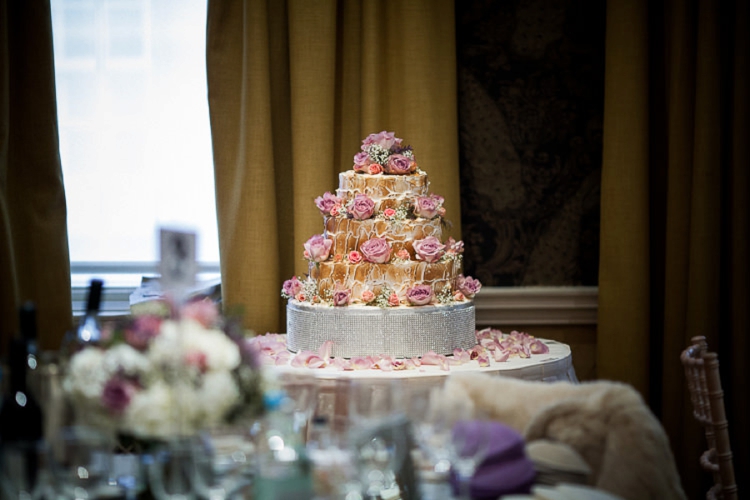 A Mariachi band singing both Mexican and Jewish songs

During the luncheon we were surprised with a Mariachi band which came in singing the famous Mexican song Cielito Lindo followed by a number of famous Jewish wedding songs such Hevenu Shalom Aleichem, Siman Tov and Hava Nagila. This was a beautiful mix of both my Mexican background and Freddie’s Jewish religion.

My family brought tequila bottles from tequila, Mexico for us to give our guests as favours. They were engraved with our names and the date of our marriage. 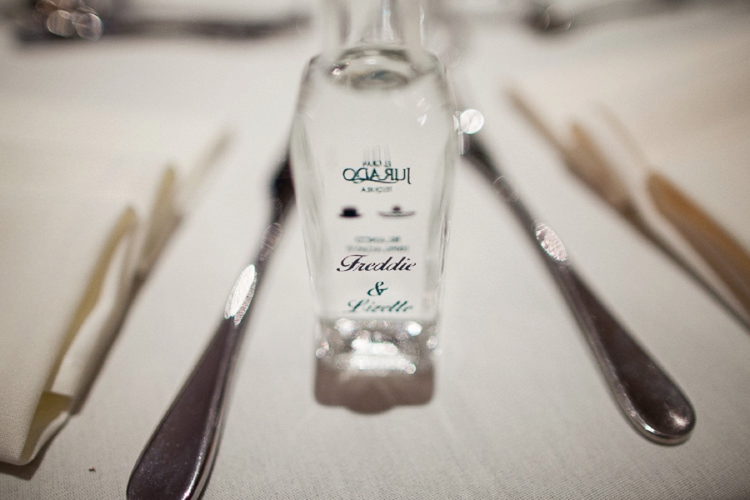 Our photographer was Matt Parry and we chose him as we felt his photos offered an alternative creative edge to them. Matt was definitely the right choice for us. From the moment we met him in the morning he was a delight to work with. He slowly eased us in from an easy photo outside the hotel to standing in the middle of the Knightsbridge traffic! When we received our photos a few weeks after the wedding we were happy to say they were incredible.

Maria and her band sang a more relaxed live lounge style of songs during the party set of songs post dinner. 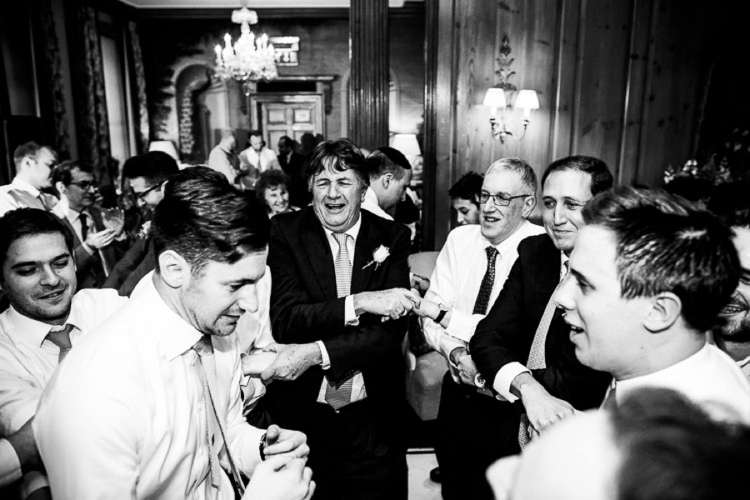 Following a welcome speech by Freddie’s mother, Freddie’s two brothers and sister joined together to make one hilarious speech on their recollections of what life was like growing up with Freddie. My Dad gave the father of the bride speech in Spanish which was translated by my brother. 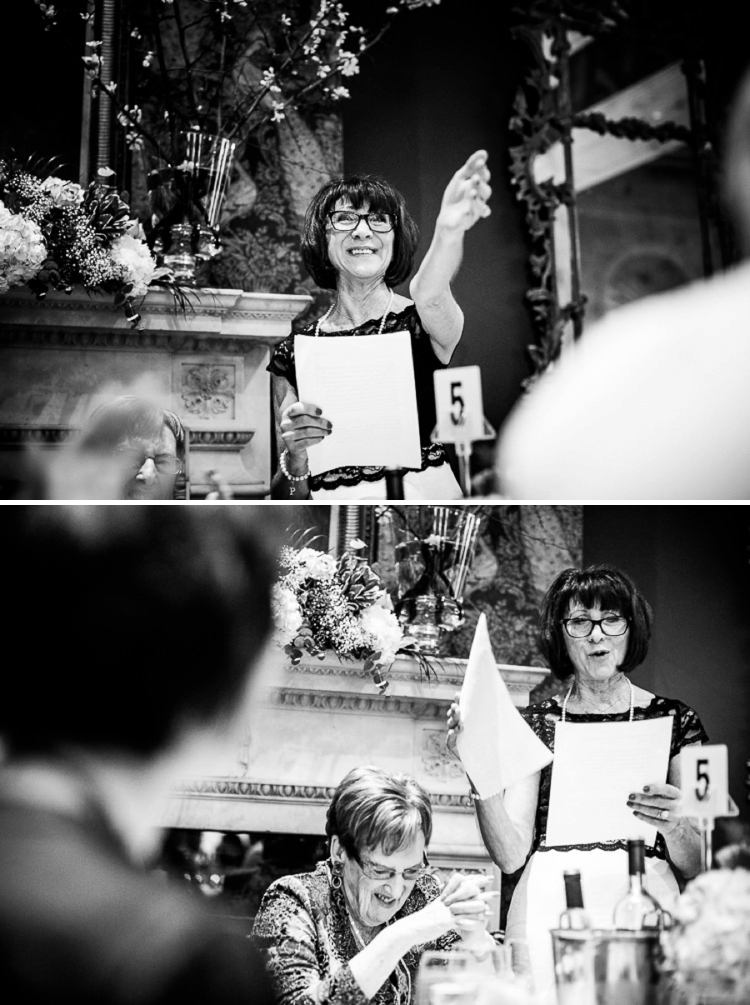 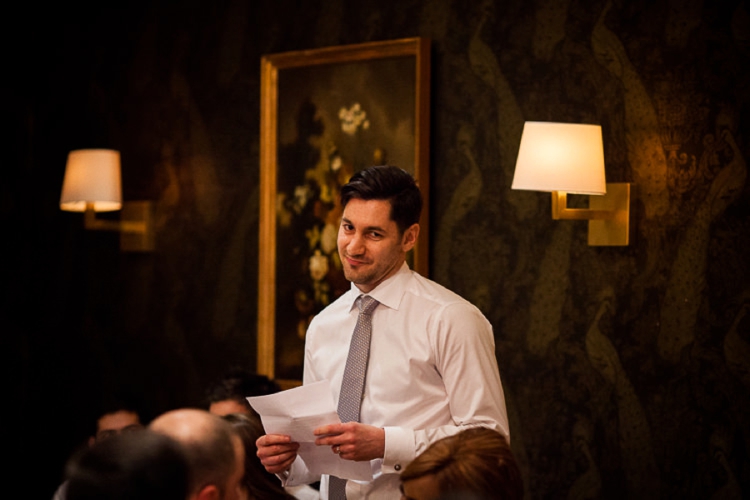 advice to brides and grooms currently planning their wedding

I enjoyed every single minute of my wedding day, from the moment I woke up until the party was over. I was so lucky to have my amazing mother-in-law and sister-in-law organise the wedding, so for me it was stress-free wedding!

My advice would be to remember this day will never come back and it passes by so quick that all we can do is enjoy it and try to have mental pictures to relive it in our minds. It’s really not worth stressing about anything! For me, an example is that one of my false eyelashes came off after the champagne reception. I could have stressed about it, ran to the rest rooms and spend time trying to fix but I chose not to even think about it and kept enjoying it as if nothing had happened — and no one even noticed it! 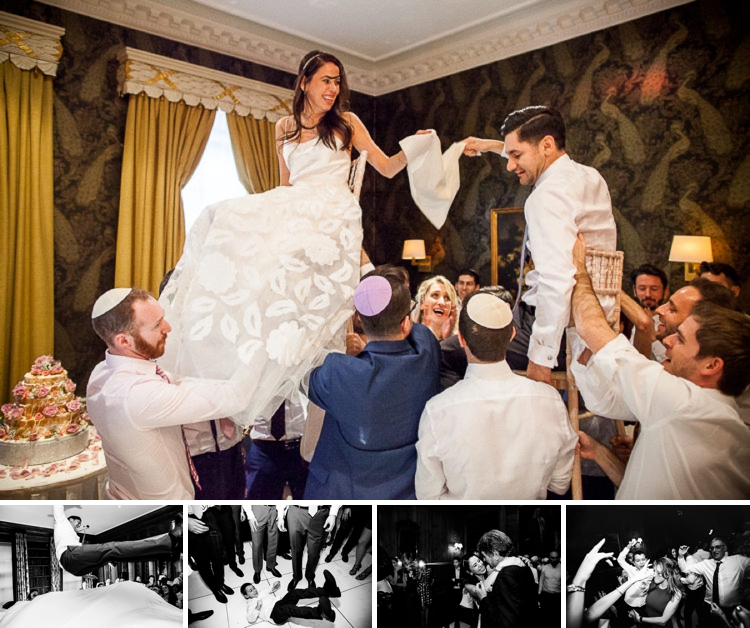