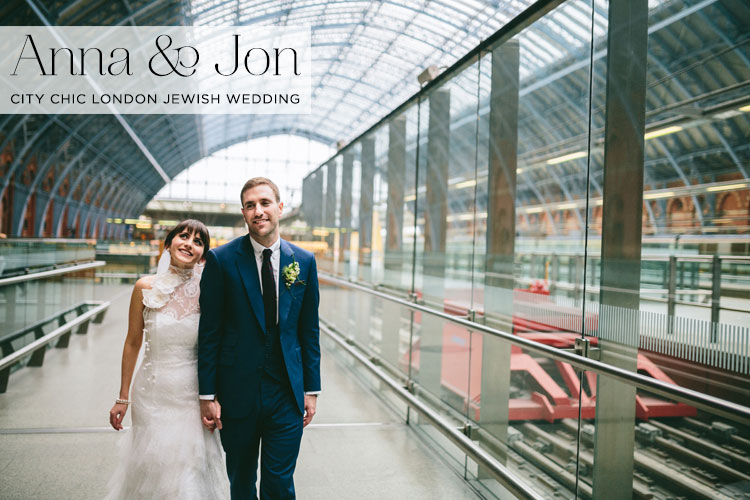 Anna, the Bride: Jon and I met 9 years ago when we were in our early 20’s.   It was at a house party in London — I only decided to go last minute after one of my friends asked me if I wanted to join her.   Jon lived in the flat upstairs and turned up at about midnight after his original plans for the night had been aborted — he and his friends had been turned away from famous fetish club night Torture Garden for being inappropriately dressed (not enough rubber)!   The S&M community’s loss was my gain! 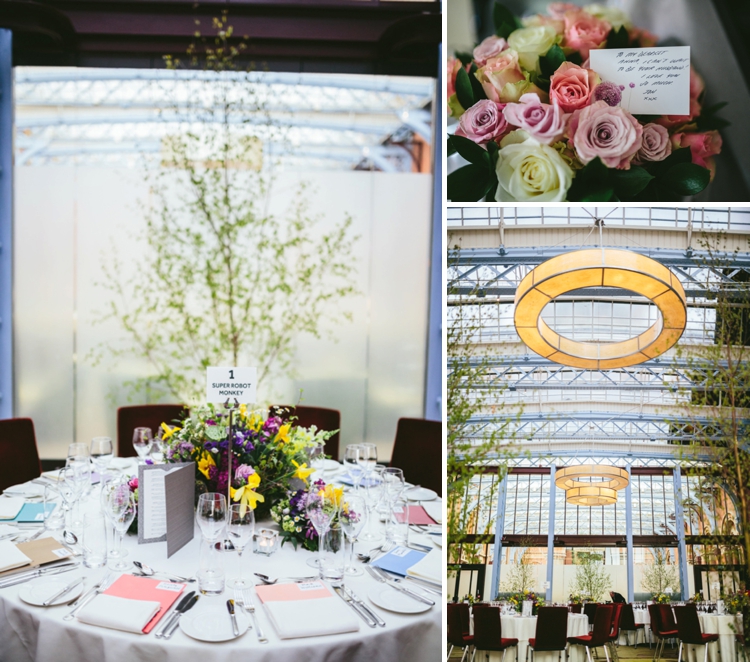 Choosing  the St Pancras Renaissance  as  our wedding venue

Our venue was the St Pancras Renaissance Hotel.   There were a number of reasons for choosing this venue, including: 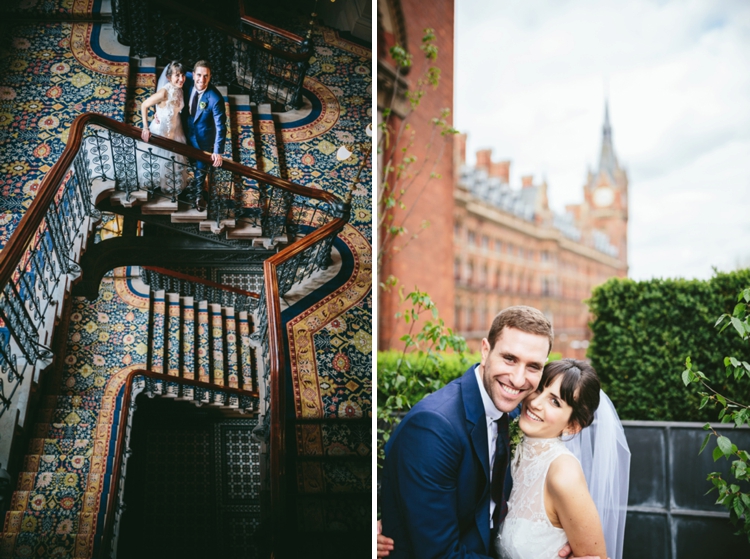 definitely not a  ‘cookie-cutter’ wedding

We didn’t have  a theme as such.   The main consideration was that the day reflected our personalities rather than being a ‘cookie-cutter’ wedding day and that it would be super fun for both us and our guests.   We didn’t employ a wedding planner, we were keen to do it ourselves and felt we could handle it; I’m used to project and event management as part of my job and Jon turned out to be a total groomzilla!

We wanted a sense of fun so incorporated my love of monkeys and Jon’s for robots — we named the tables after notable monkeys and robots from history, the place settings/ favours were make your own robot kits from Magma and we had a loved up monkey and robot sitting on the cake. 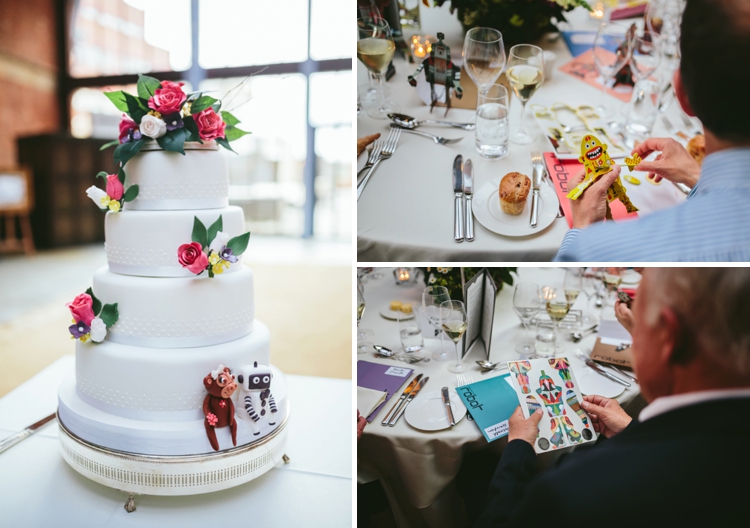 a wedding  dress with a polka dot tulle skirt.

My dress was by Cymbeline, I got it at Mirror Mirror in Angel, London.   I wanted to get something different to the usual strapless satin number and something that was really fun to wear.   My favourite part of the dress was the polka dot tulle skirt.   After trying it on I couldn’t get it out of my head and I went to a another shop to try a few more to be sure but nothing else felt as ‘me’. 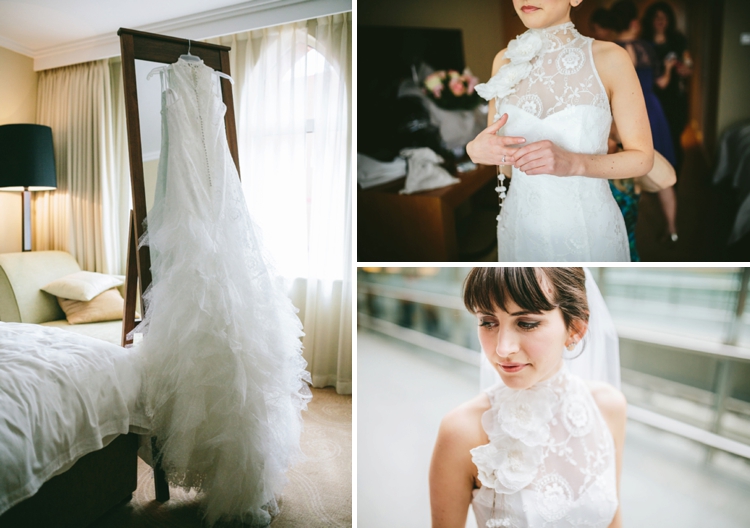 There was a lot going on with the dress — lace, tulle, a high neck, applique flowers on the shoulder – so I kept the accessories simple.   I wore rose stud earrings from Accessorize and some pearl bracelets.   I wanted a very simple veil, so rather than buy one from a wedding shop for £150ish, I ordered it online from The Wedding Veil Shop for around £50. 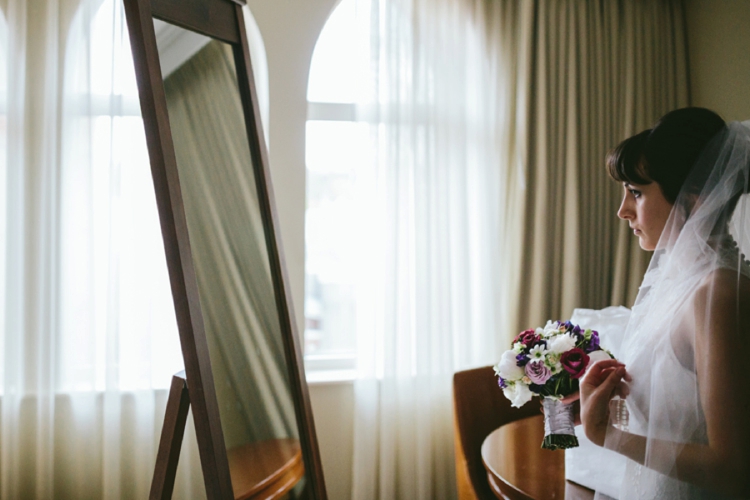 My most important consideration when choosing shoes was that they were comfortable as well as elegant.   I got a pair of strappy gold snakeskin sandals from Nine West that looked good and allowed me to stay on the dance floor till 2am! 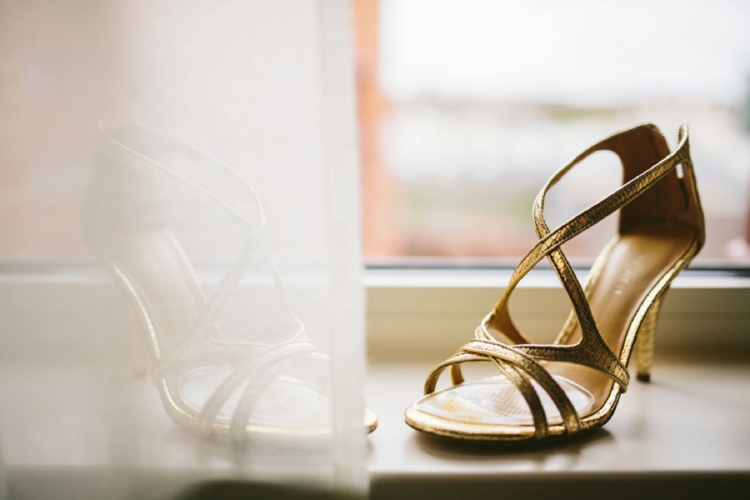 My hair and make up was by The Beauty Collective.   I had to tie my hair up because my dress had a high neck and wanted it to look classic, slightly retro. 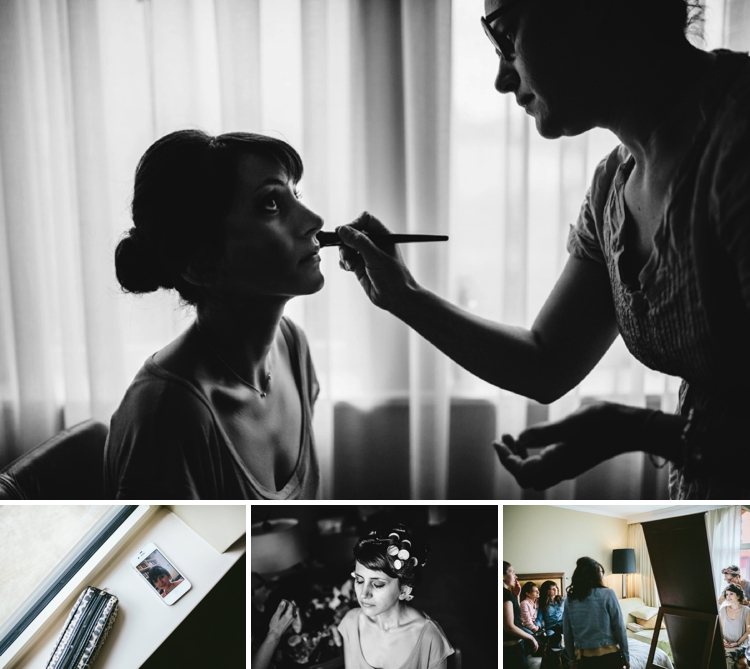 a bespoke suit for the groom

The main splurge was probably Jon’s suit — he had always wanted a bespoke suit so had one made by Thom Sweeney. He ended up having more suit fittings than I had dress fittings! 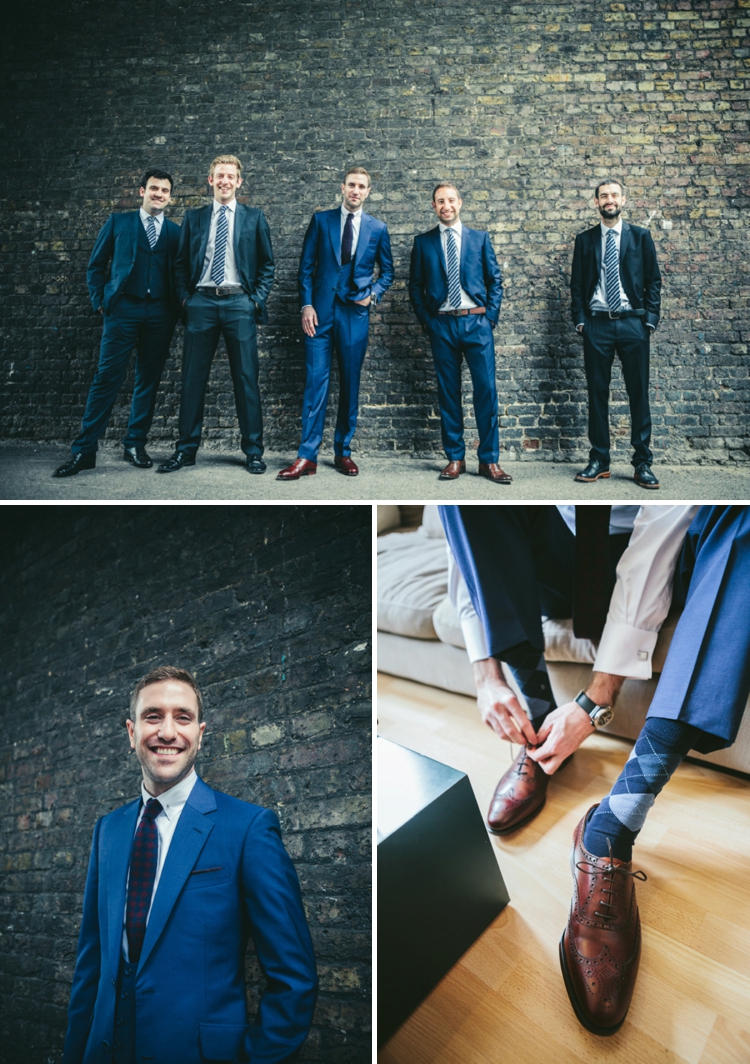 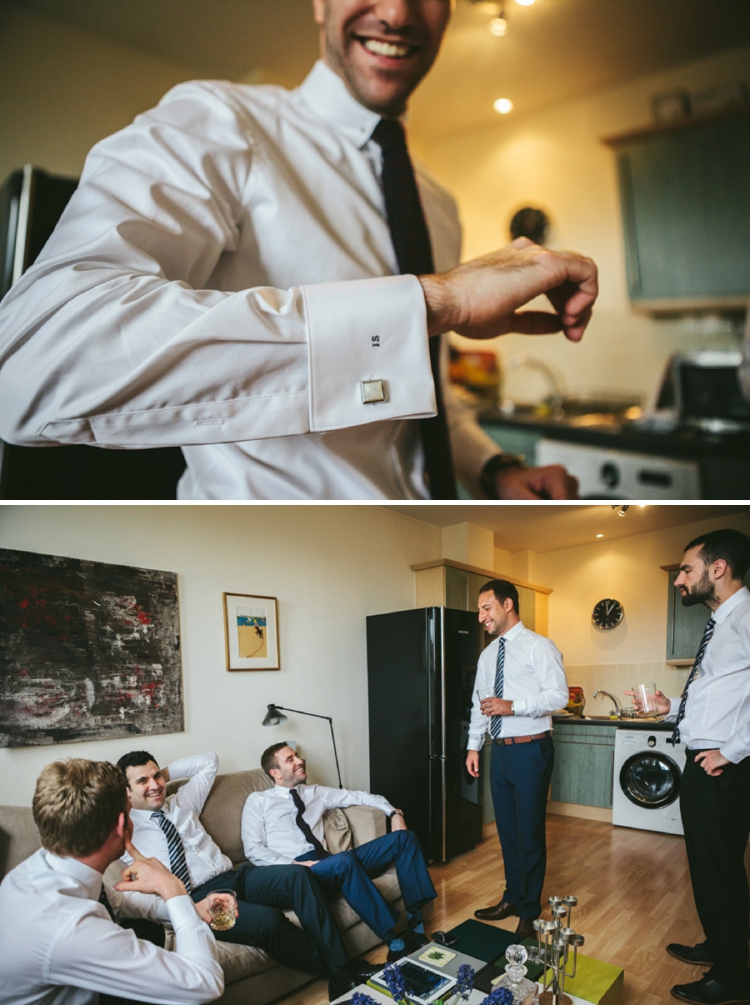 My two younger sisters and my best friend from school were my bridesmaids.   I had budgeted £150 for each bridesmaid dress but was really lucky and found the perfect dresses in the Whistles January sale for £50 each.   The dresses were purple lace to tie in with the colour scheme.   I gave each of the girls a budget for accessories and let them style the dress how they liked so that they would feel comfortable. 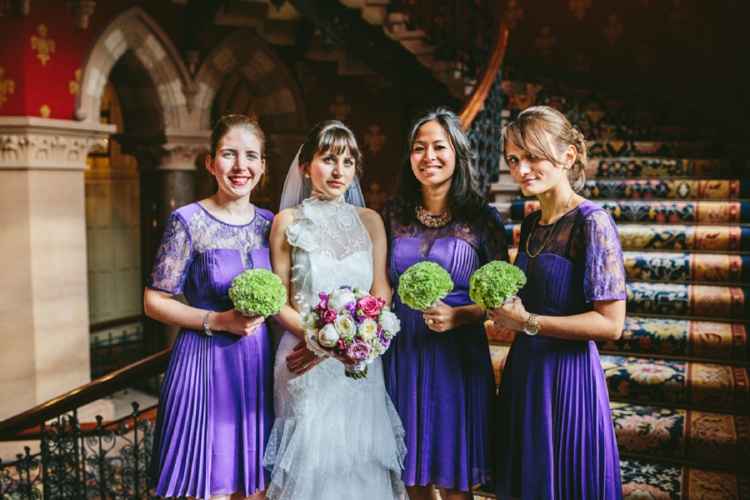 how we personalised our  ceremony

The readings were from William Morris to reflect the period in which the hotel was built and one of my favourite periods of art history, One Hundred Years of Solitude by Gabriel Garcia Mà¡rquez  because it’s one of our favourite books, and my brother-in-law sang a traditional Irish love song in a nod to my mother’s side of the family. 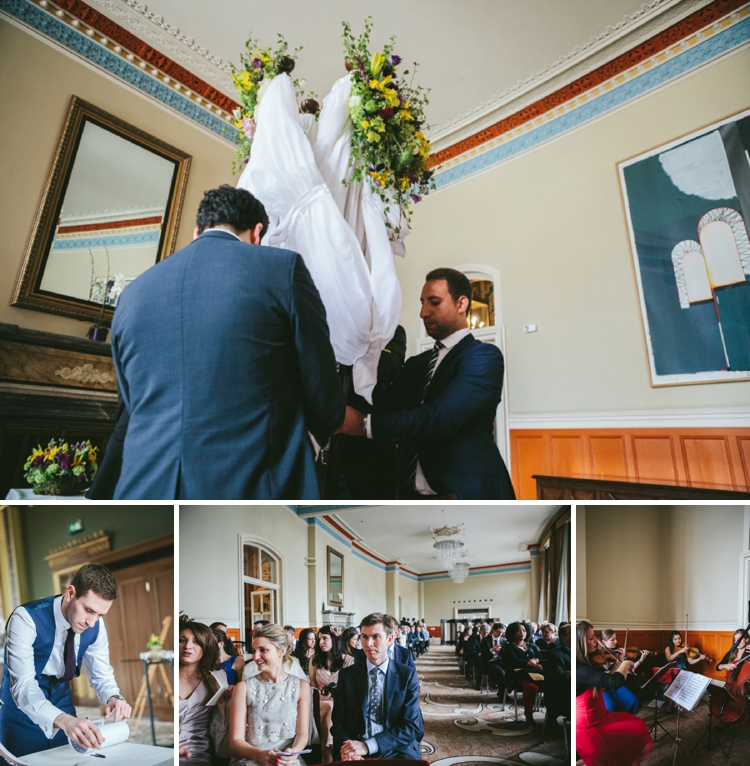 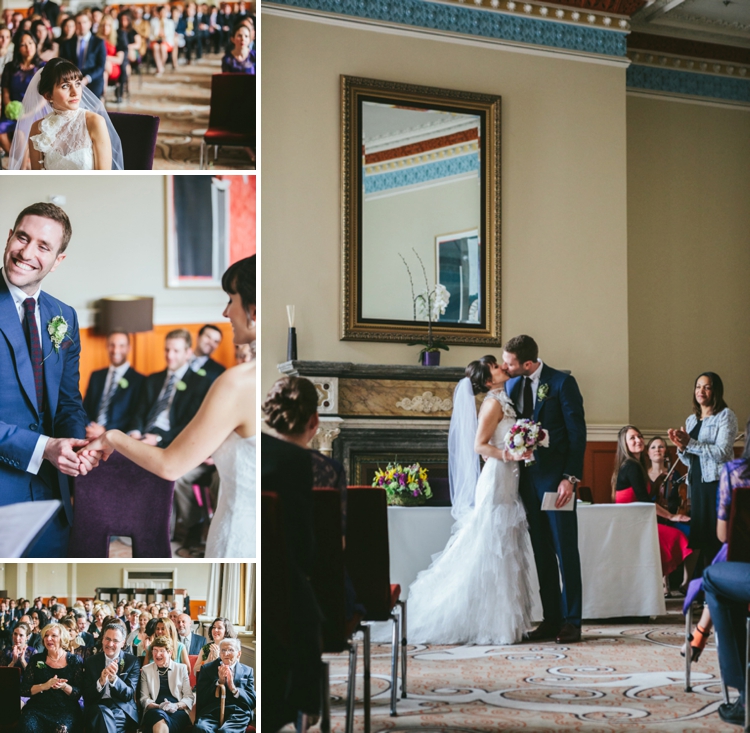 We asked Jon’s parents to design and make our chuppah.   We thought this was a really nice way of involving them and we liked the idea of such an important ceremonial item being an original and something made with a great deal of care and love.   They spent a lot of time perfecting the design and the end result was very elegant.

We had a string quartet,  supplied by The Wedding Music Company,  who played music from my favourite ballet,  Tchaikovsky’s  The Nutcracker — and then for my entrance On The Street Where You Live from the film My Fair Lady, which has been one of my favourite films since I was a little girl.   We also had some traditional Jewish wedding music — Dodi Li as the chuppah was being set up and of course Mazel Tov after the ceremony was complete.

The flowers were by Jens Jakobsen who made beautiful, inventive spring arrangements with the quite challenging colour scheme we chose — deep purple and yellow.   We also transformed the reception space with a dozen silver birch trees. 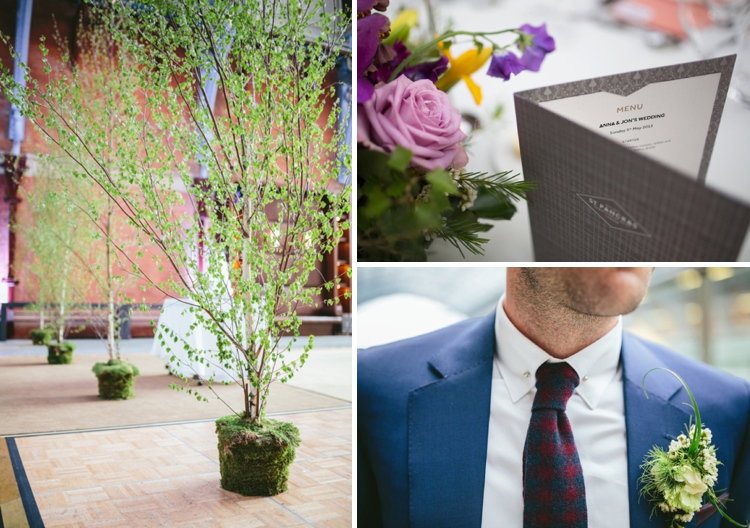 We chose James and Lianne for our photographers.  They were wonderful; they made us feel very relaxed and the photographs are really beautiful and natural.   We also had an engagement shoot included as part of the package which was a great opportunity to meet James in advance and to get used to having our photograph taken.

The cake was made by Brown Sugar Cupcakes who are old friends.   They made a delicious four-tier cake with really elegant flower work. 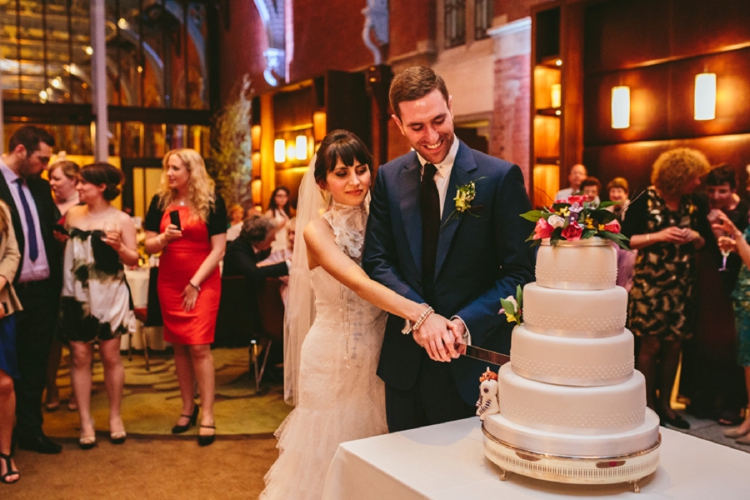 A fabulous DJ and a photobooth

We chose a DJ rather than a live band so that we could have all our favourite songs.   Our tastes cover quite a range of styles that a band wouldn’t be able to cover — UK Garage, Drum n Bass, RnB, Hip Hop and even Brit Pop!   Our guests weren’t shy to get on the dance floor and were reluctant to leave when the music stopped after 2am!

We also had a photo booth supplied by The Mighty Booth, which kept everyone entertained while they were taking a break from the dancefloor.   We got a book with copies of all the photos and personal messages that made us laugh a lot the next morning! 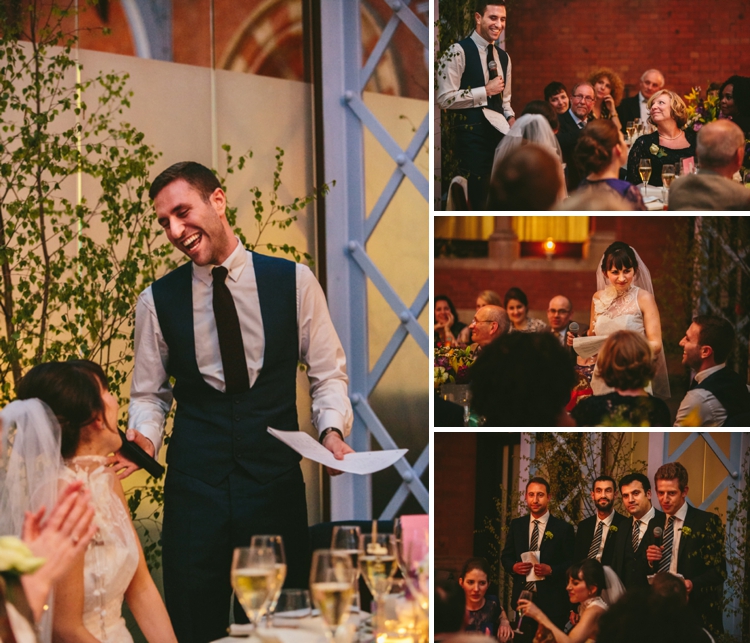 We weren’t completely comfortable with the notion of the first dance but felt we’d regret it if we didn’t do it!   We chose a romantic song by British electronic band Hot Chip but got the DJ to mix in their well known upbeat song Ready for the Floor to get the guests on to the dance floor ASAP! 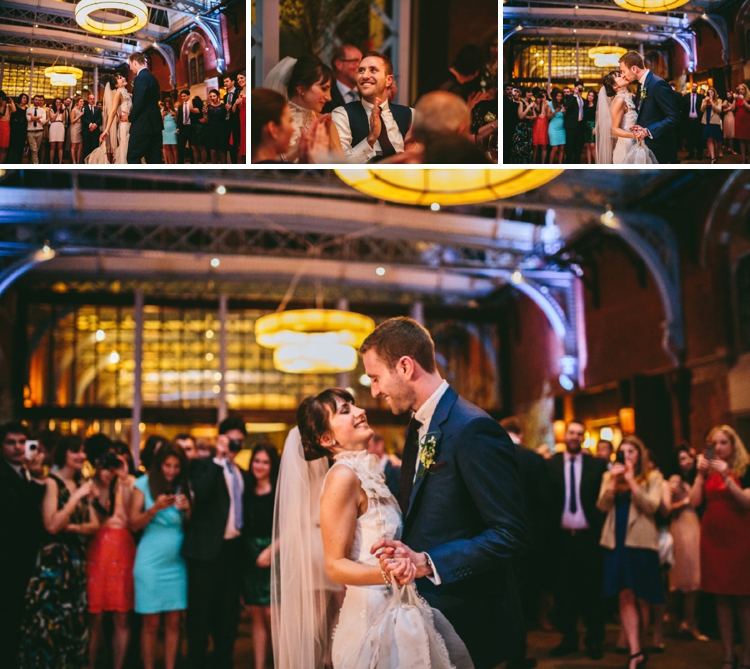 a fried chicken break at 10.30pm and a silent disco!

We wanted to incorporate some of our favourite things on a night out so we had a fried chicken break at 10.30pm and a silent disco for the last hour (supplied by The Wedding Music Company).   The silent disco was also a great way of getting round the hotel’s no music after 1am policy! 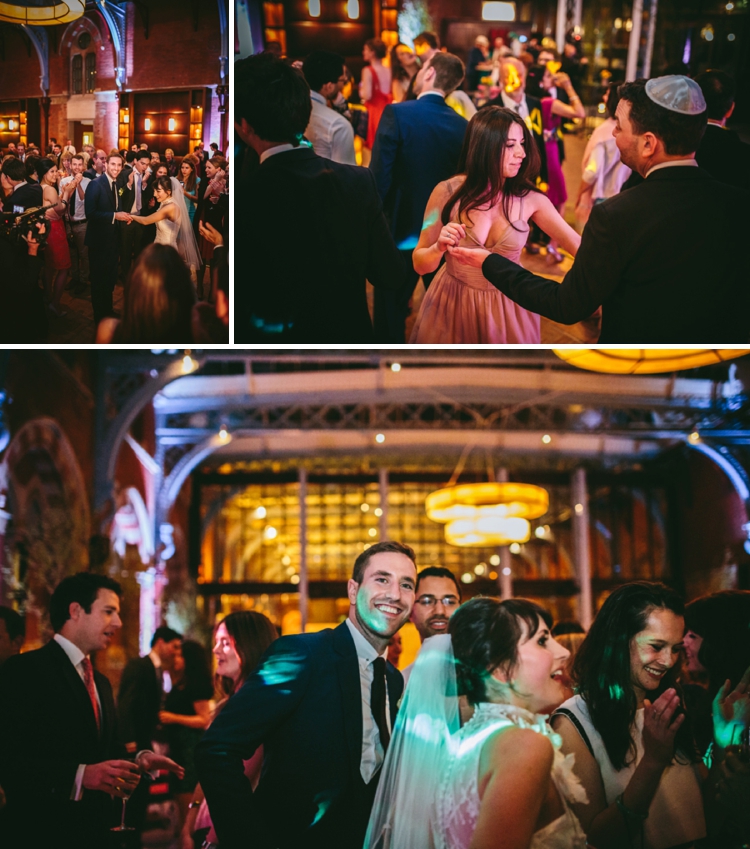 Anna: I will hand over to my groomzilla husband for this question!

Jon: I would say that it’s really important not to fret on the day if things don’t go quite according to plan.  With such a complicated event it’s inevitable that some things won’t be quite as you’d planned – the important thing is to just try to be in the moment as much as you can.

Also, Anna and I are useless at getting to other people’s weddings on time, so we assumed that everyone else would be the same.   We therefore put 3:30pm on the invites, knowing that the ceremony would start at 4pm.   Unfortunately all our friends and family turned out to be much more organized that we are and many people turned up even before the Rabbi! Therefore, this is not one technique I’d recommend to other couples!