In the summer of 2013, Harley and I both joined JDate. He was moving to South Florida by himself from Montreal and looking to make a connection, and I may have been a bit bored in graduate school looking for some Jewish romance! Although neither of us actually lived in Palm Beach County at the time (he still had a few more weeks in Montreal, and although I am originally from Palm Beach I had one more year of graduate school in North Florida), we both indicated that we were from the area and showed up in each other’s searches. We began messaging, Facebook-ing, texting, and Skype-ing (to ensure that neither one was a 60 year old cat lady) every day until we finally met on June 24th, 2013…just hours after he had officially moved to the United States!

Our first date consisted of eating “snowballs” at Jupiter Beach, and I later admitted that I probably would have done a lot more complaining about the sand burning my feet if we had known each other longer! I had to return to school in Jacksonville immediately after our date, but it would only be two days until we’d see each other again because Harley conveniently purchased a car from South Carolina and had to drive it back down to Florida.

He quickly passed the roommate/friend test by becoming an extension of our friend group that week and even going on “man dates” with my friend’s boyfriend while we were in class. Being the themed-party lover that I am, I wanted to make sure that Harley was able to properly celebrate his first Canada Day living in the United States. My friends and I surprised him with a celebration even William Shatner would envy. complete with Canadian beer, maple syrup, “ice fishing” in the sink with a Fischer Price toy fishing set, and a homemade version of “Pin the Antlers on the Moose.” I had officially won Harley over by throwing him his first ever surprise party, and so began  our love story! 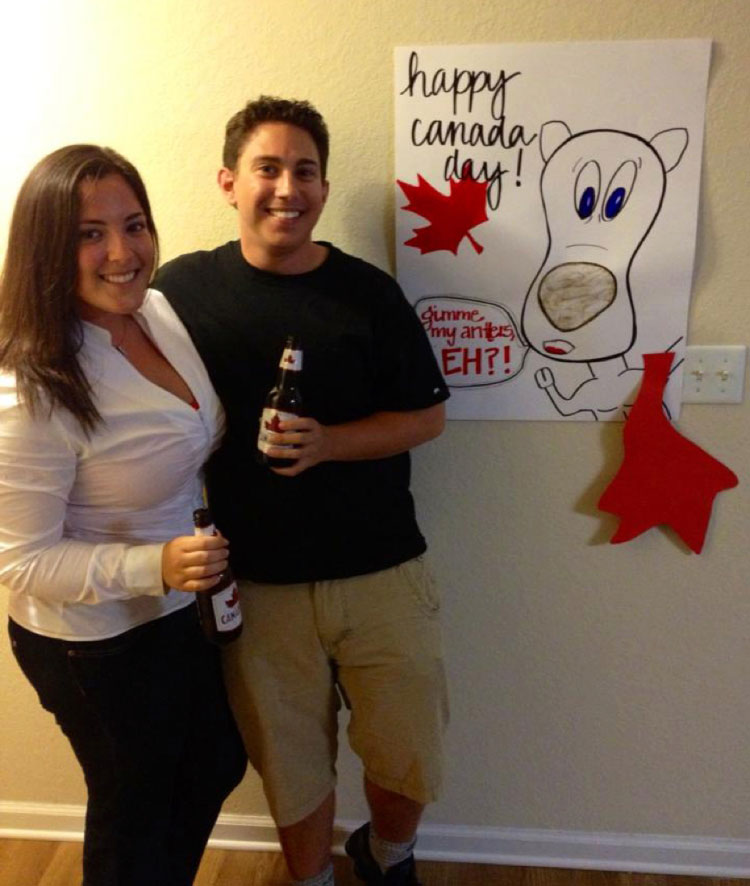 We dated long-distance for the next year, with me always figuring out the clues regarding when Harley was going to “surprise” me with a visit and clearing my schedule of work, school, and internship. Four days after graduating with my Master’s, we traveled to Hawaii for two weeks…Everyone said this would be a great test to our relationship because we went from long-distance for a year to being together every minute for two weeks straight! Well, we more than survived the vacation, and I was fortunate enough to get my dream job as a Career Counselor at a university near Harley just days after our vacation ended. We have been living in the same town ever since and fill our time with friends, family, traveling, and hockey. We even have Season Tickets to the Florida Panthers, have taken three hockey-centered vacations in the past year, and plan on taking some hockey-inspired engagement photos!

Speaking of engagement, we got engaged in Barcelona on March 11, 2016. We were traveling with a couple we know from my time in graduate school, and Harley thought it would be the perfect time and location to pop the question. He had reset the diamond that was passed down to him from his mother who unfortunately passed away a little over a year into our relationship. She had been very sick for some time but was able to express her approval of our relationship and told him that she would love for me to wear her ring one day, which means so much to us both. Now Harley can see a piece of his mother every day when he looks at the ring which represents both his parents’ marriage and our future together!

Harley asked me to spend the rest of my life with him on the Telefà¨ric de Montujuà¯c, a cable car ride leading up to a castle on Montjuic, which literally means “Jewish Mountain” and has a panoramic view of Barcelona. 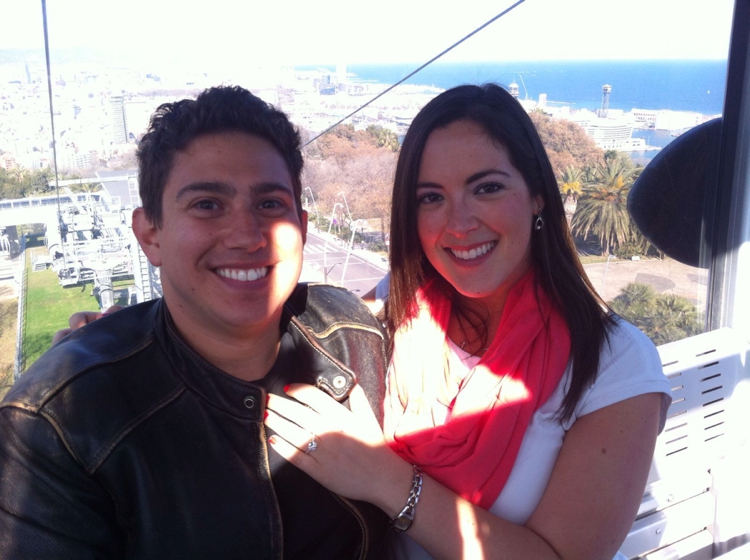 Our dear friends, Chris and Kallie, were with us in the cable car to capture the moment on camera, which I have always told Harley I would want when we got engaged. The funniest part of the experience was that I was the only one who had researched the cable car ride and knew that it only lasted eight minutes. We all spent the first six minutes laughing, talking, and taking selfies with the incredible views before a sense of panic set it.

Harley exclaimed that we were almost at the top of the mountain, Chris and Kallie became completely silent, and Harley got down on one knee to ask me that life-changing question I basically have no recollection of because I was too excited to hear him! The cable car attendants waiting to greet us at the top of the mountain must have thought we were crazy because we all exited the ride screaming, laughing, crying, and ready for an impromptu engagement photo shoot. It was truly a magical day, and we spent the next few hours celebrating, drinking Cava,  and trying to find wifi to call our families to share the news! 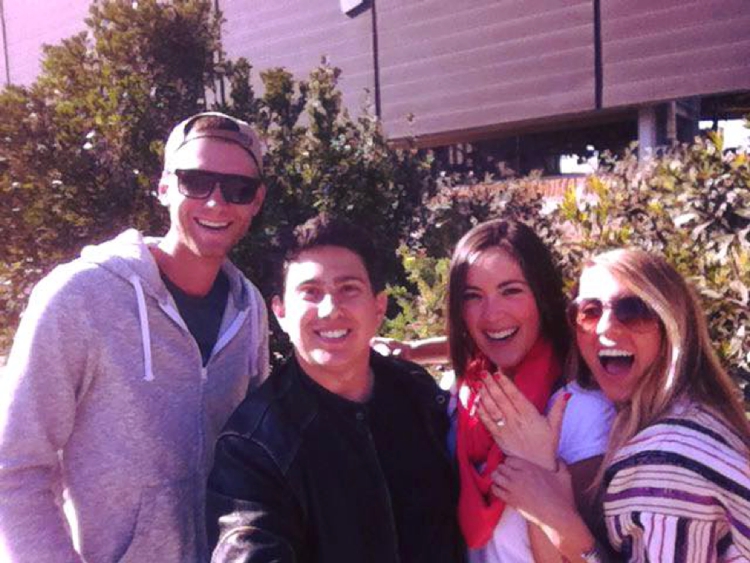 It didn’t take long for us to get excited about planning our wedding. In fact, when I jokingly asked Harley on the plane ride home what I was going to search for on Pinterest now that I was wearing my dream engagement ring, his very serious response was, “wedding centerpieces?” Although we decided not to host a traditional engagement party since our families are so spread out, we quickly received an outpouring of love and excitement from our friends and family. The mailbox was inundated with engagement cards, “I Can’t Keep Calm, I’m Getting Married!” shirts, and wedding planning organisers. Our first trip back to Montreal to visit with friends about a month after our engagement even included a surprise celebration at one of our favorite restaurants!

We are so excited to be starting our lives together at the most beautiful beachfront location on  July 9th 2017, which finally feels real now that we just passed the one-year mark, but are also just enjoying being engaged and planning every aspect of our wedding together. We’re so appreciative for this unique experience of blogging about our relationship and planning our wedding together because we know this is something we will happily look back on for years to come…well beyond the time the smashed glass from our ceremony becomes a mezuzah…

Dawn  will be  marrying Harley  on 9th  July 2017 at the Delray Beach Marriott in South Florida, USA.