Alex and I are in that small, but steadily increasing, minority of online dating success stories. Specifically, a match.com success story. After several email exchanges on match.com’s platform, we met for our first date on an unseasonably warm November evening. The first thing I noticed about Alex was his fantastic hair, sharp blue eyes, and a sense of humour that I fell in love with long before the appetizers were delivered to the table. Our first date was nothing but fun, lively, and hilarious. Which truly set the tone for our entire relationship… constant laughter.

The next day, following our first date, around lunch time, Alex called. Actually called, called, to tell me what a fantastic time he had, and how he’d love to see me again. And so it began. For the next six weeks, we met up once or twice a week for fantastically planned dates, Alex always following up with an actual phone call the afternoon following a date. That is, until the very last night of Chanukah 2014 rolled around. I told him (boldly, it took every ounce of courage) I didn’t want to date anyone else, only him. And he replied that he had stopped seeing other people after our first date, and was glad I was finally on his page (swoooooon). 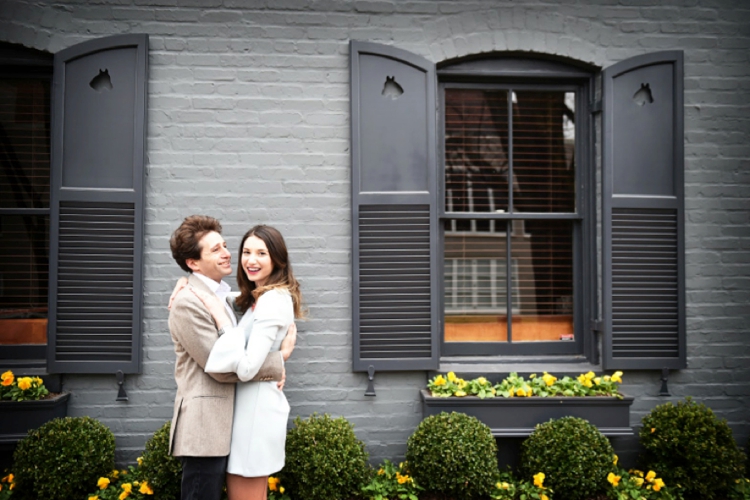 Once we were ‘officially’ together, the fun really began. It was a whirlwind of a romance. We spent so many weekends traveling to various cities across the country. We were both very serious about each other and the relationship from the get-go. Alex did a fantastic job of making that perfectly clear: he made me a key to his apartment, cleared out the second closest in his bedroom, and bought me a second set of toiletries to keep at his house – so I wouldn’t’ have to pack overnight bags — all within the first few weeks. By March, I was practically moved into his apartment — spending every night at his place until we hired movers in June. Was it fast? Sure. But when you know, you know.

Though we are complete polar opposites, and despite our nine year age gap, we have the best time together. We can talk for hours and hours, we have fun, lively, witty, interesting conversations. We share solid core values, and both very much invested in making a Jewish home together. He’s also my best friend. Early on in the relationship, we had talked about marriage. We were on the “four seasons” plan. Meaning we agreed to date for four full seasons before taking the next step: marriage. 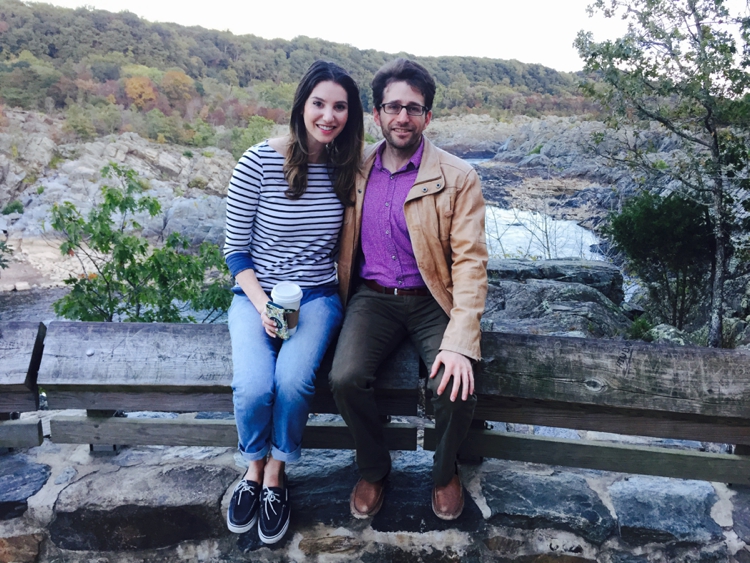 Blink! It was December again, and we had just hit our one year, so I knew it was coming. But then January rolled around, and still no proposal. It had to have been coming — right? The anxiety of when nearly killed me as the days ticked by. Until one night, over dinner, mid-January, Alex told me that he loved me, wanted to marry me, but needs help because has no idea what to do (he is self admittedly not a romantic). What would I like? What’s my ideal proposal? Where do I want to get engaged? Which of the two engagement rings that we tried on together, would I want? What was my ring size again?

Giddy with excitement, we went over the details together, it was such an open and exhilarating talk — our proposal! We agreed a proposal weekend in Chicago made the most sense. After all, Chicago is where we took our very first trip together as a couple. Chicago is a place that holds very happy and fond memories for us.

By the time the next evening rolled around, the engagement ring (with its matching wedding band) was ordered, the hotel was booked, and plane tickets were purchased. The ring would be ready in a mere few days, where it sat in Alex’s sock drawer for two weeks. Oh, and we decided to keep this all a secret from everyone until he officially asked me to marry him. I was dying. All I wanted to do was call my mother!

And off to Chicago we went, just before Winter Storm Jonas hit the Mid-Atlantic Region (we were glad to have missed it!). Once in Chicago, we went to iO Chicago to see an improv show, ate / shopped and had a lovely day. This is the part of the weekend that was actually a surprise: Saturday afternoon (01-23-16) we went to the Nature Museum in Lincoln Park, Alex eagerly leading us into the butterfly conservatory. I’m too busy trying to photograph as many butterflies as I can to realize Alex is nervously sweating in a corner. He called me over, so I walked towards him, finding it odd that he had kept his winter jacket on, even inside the conservatory (it was SO hot in there), and as hundreds of butterflies fluttered around us, Alex pulled out a little black box from his winter coat, and asked me to be his wife. YES!

We had our engagement dinner at Spiaggia and spent the rest of the evening celebrating, while overlooking all of Chicago at The John Hancock Observatory Tower. The next morning, our friends joined us for celebratory brunch. And since our flight home was naturally cancelled due to the snowmageddon, we decided to drive home from Chicago to DC (10.5 hour drive… but oh did we have the best time) it was a fantastic weekend. 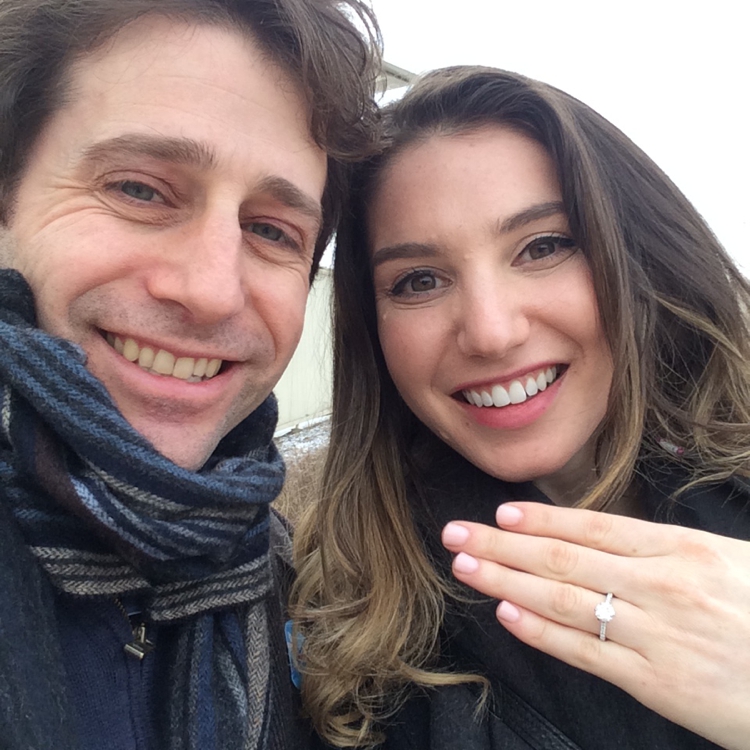 Ideas for our  wedding

Three weeks after we got engaged, we flew to Arizona, for a weekend with Alex’s parents. They threw us an engagement party and suggested we tour a few venues. At this point, we still hadn’t nailed down a location for the wedding. Florida (where my family lives)? Here in our own backyard in DC (where we’ve built our lives)? Arizona (where Alex’s parents are)? But as soon as we arrived at Tubac Golf Resort, fell deeply in love with the atmosphere. Everything about it. The resort is a charming and historic Mexican ranch (built in 1789 –  long before Arizona even became part of the United States, again, so charming). And it was settled, just like that. An Arizona wedding!

I always envisioned an October wedding, but with the Jewish holidays, we figured we should wait until afterwards. And so, Saturday, December 03, 2016 it was! The venue is just so charming, I can’t say that enough. Our chuppah will be on a beautiful patch of golf greens, with spotted with weeping willows, and brick bungalows, overlooking the Santa Rita mountains, with cows walking around in the not so far distance.

Alex and I both have very similar visions for what we want from our wedding day / weekend, so for the most part, the ‘ big picture’ planning has been a breeze. Outdoor wedding, a really fun party, traditional. Well, mostly traditional. We’ve opted out of having a bridal party, which is something that we both felt very strongly about. The idea of selecting only a handful of ‘favourites’ felt unnatural to us. Also, I’ve never enjoyed being a bridesmaid, there is so much pressure and stress involved.

We’re also having my cousin, Mark, officiate our wedding. It’s a pretty common thing to do these days. And since there’s no way our local rabbi — here in Washington, DC — is going to fly across the country and perform a Saturday wedding, we didn’t want to hire a rabbi that we’d never met, etc. It’s actually something I’m looking forward to, having my cousin — who’s more like a brother to me than a cousin — marry us.

The last unique piece to our Jewish ceremony – we are renting four, 8 foot birch poles from our florist, which will be tied together with cloth that my mother will sew. Each of the poles will be carried down the aisle, and held up by our family: my oldest brother, Alex’s sister, and two cousins (one from each side) that we’re extremely close with. This was actually Alex’s idea, I had never seen / heard of this type of chuppah before, but once I browsed through photos, I fell in love with the idea of honouring 4 family members, and how much more intimate it felt (by the way, it also saved a TON of money… which was just icing on the cake!).

After we got back from Arizona in February, I went on a manic wedding planning binge. Within 90 days, I signed the contract for Tubac Golf Resort (which is the venue, catering, and hotel rooms all in rolled into one), booked our photographer, florist, baker, DJ, live music for the ceremony, and wedding planner. We took our engagement photos, set up our registry, created a wedding website (which we coded ourselves!), and sent out our save-the-dates. We settled on a colour palette (burgundy, pale pink, white, and a pop of sage and gold) I found and bought my dream wedding dress, and worked with Alex’s mum to get the rehearsal dinner and farewell brunch booked. Didn’t I mention I went on a manic wedding planning binge?

Now, we have just under 5 months, and I feel like I can coast for a bit (very deep exhale). At some point, we’ll have to settle up on all the small details, but until then, I’m more than happy to do a little as possible.

What I Want from Our  Wedding

Alex and I are both Jewish, and err on the side of traditional. With that said, we are integrating all your Jewish staples into the wedding: the badeken, seven blessings, signing of the ketubah, smashing the glass, the chuppah, and dancing the hora (can’t wait for the chair!), etc.

Deep down, all I really want from our wedding is to be wearing a pretty dress, holding gorgeous flowers, and dancing the night away surrounded by our family and dearest friends. I can’t wait to finally call Alex my beloved husband, and to be his beloved wife. 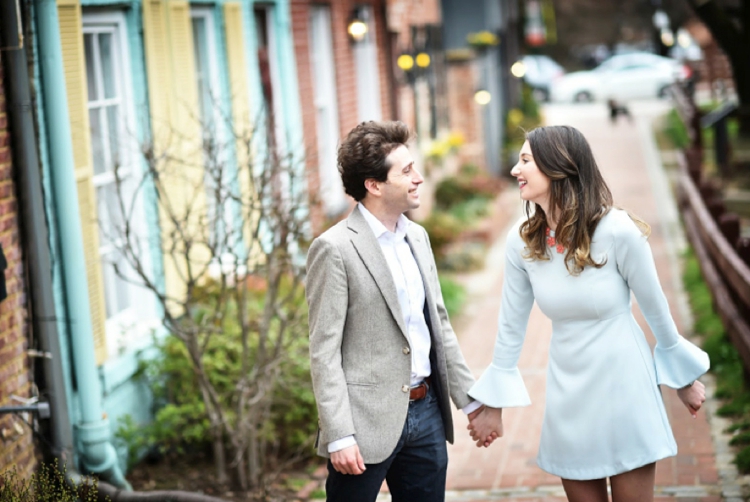 What Does Marriage Mean to Me?

Marriage to me, is the ultimate commitment to give yourself fully to your partner. Life is tough, full of struggles, and with day to day routines, life can get a bit mundane. Someone with a lightness, and killer sense of humour, with quick wits and make even the most tedious days fun. That’s who Alex and I are together. I mentioned we are quite the opposites, and with that, we balance each other out in the best ways. I couldn’t have asked for a better partner.

Twenty sixteen has been busy for us. Not only did we get engaged, but we also decided to book our wedding in the same year. And then, we did something even crazier. We bought a house. That’s right. We added a third, massive milestone into our year of chaos. Not only are we in the midst of setting up our new home, we also need to rent out our apartment. Those are big things, and daily, smooth operating communication is a must. I don’t think I would have been able to do this with anyone other than Alex. We make a stellar team.

Every tiny speed bump we’ve hit in our home buying process, renting out the apartment, wedding planning, family crises, or daily struggles, it simply further solidifies what an incredible partner I have. Each small challenge that pops up reinforces that the person I’m about to commit my life to couldn’t be better. My love and appreciation for Alex grows every single day.

I still can’t believe how incredibly lucky I am. That this brilliant, hilarious, kind, patient, responsible man found me in a sea of profiles. And to think, it all started with a message about my killer chilli recipe. I cannot wait to grow old with him. 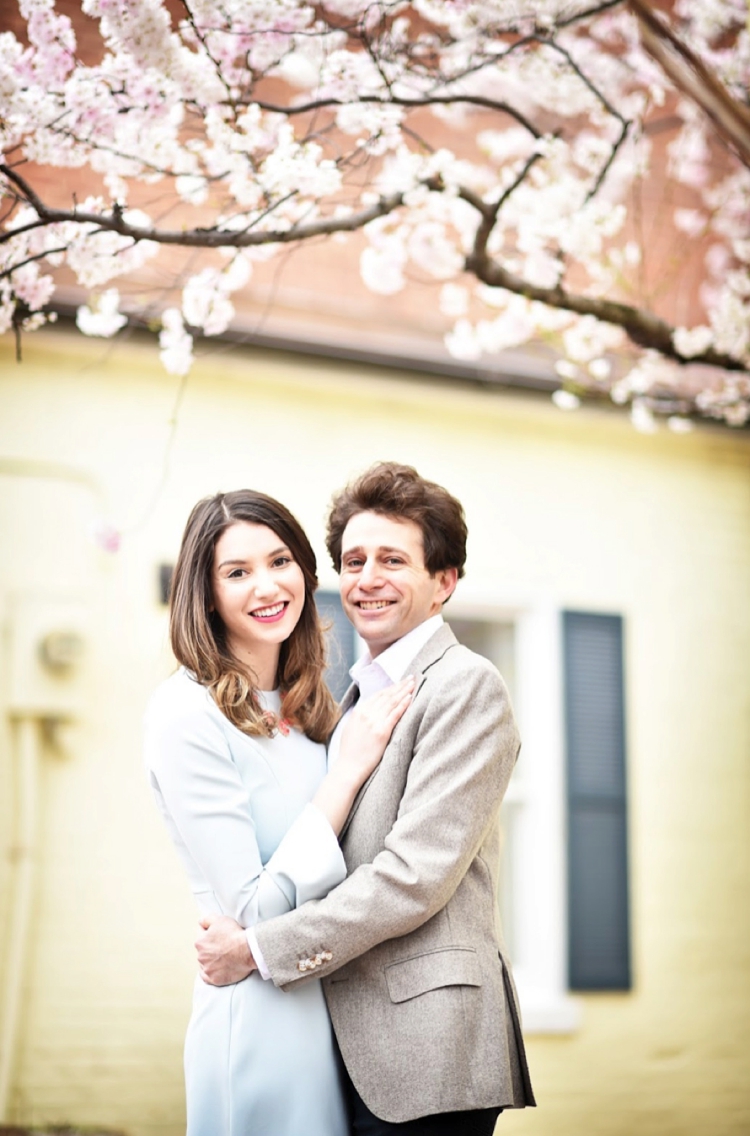