Today on the blog we’re introducing our 5th gorgeous bride from our crop of 2018 and 2019 Real Jewish Brides! Please give a warm welcome to Rebecca who will be marrying David on 7th October 2018 at a secret location in Israel!

THREE FACTS: (1) Rebecca and David met on JSwipe (so old school we know 😉 (2) They are having a destination wedding in Israel at a secret location! (3) They are getting married on Rebecca’s grandparents wedding anniversary (who have been married for 64 years). We LOVE that! 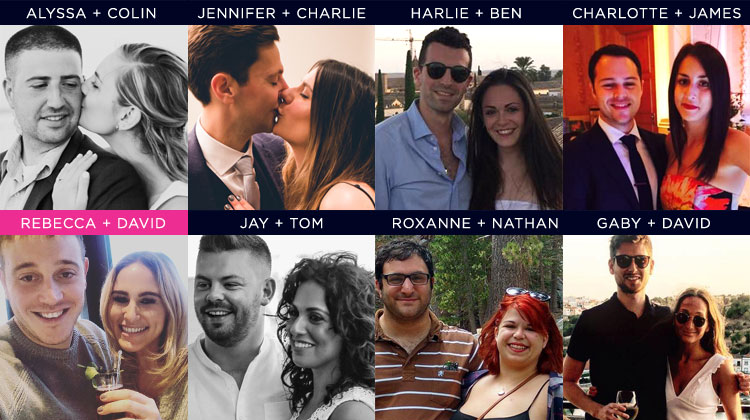 David and I met one year ago, so it really has been a bit of a whirlwind! I had been single for about a year and a half and was pretty happy being single! I was enjoying time with my friends and had recently moved into a flat in West Hampstead. I was turning 30 in the summer and my best friend and I had just booked a huge road trip round the USA ending in Las Vegas. I was dating and of course wanted to meet someone but was being relaxed about it having lots to look forward to!

One night last year in March I was swiping on Jswipe and I came across David. We had lots of mutual friends, one of which being my best friend I had just booked my holiday with, so when we matched I instantly called her and said ‘who’s’ this?!’ to which she replied ‘OMG I love him he’s a really good friend you should definitely go on a date with him – I don’t think he’s THE ONE but I think you will fancy him and he is super tall’.

Being 5ft8 height is a REAL thing for me. I was like ‘how tall’ and she said ‘put it this way, you will be able to wear your highest heels’. To which I was delighted! I am 5ft 8 (my brother is 6ft7 and my sister is 5ft11 — I have no idea where we have come from!).

The struggle is really real for tall Jewish girls to find a tall Jewish man, I was so sick of wearing flats and worrying about how tall someone was — so knowing he was tall I already knew my outfit for the first date!

My friend messaged David saying you have matched with my friend and if he wanted my number — all he said was ‘oh she’s hot and he will have a look’. I wait 1 week and receive NO MESSAGE FROM HIM! I am obviously furious so decide to take matters in my own hand and message him first! #independentwoman (He still to this day said the app was “deleted” which is why he didn’t message me as he didn’t see it!)

We start messaging and we get on like a house on fire and start to arrange a first date. I am originally from Leeds and it was round Peseach last year so was back home for the holiday, so we waited to meet up for a drink after. 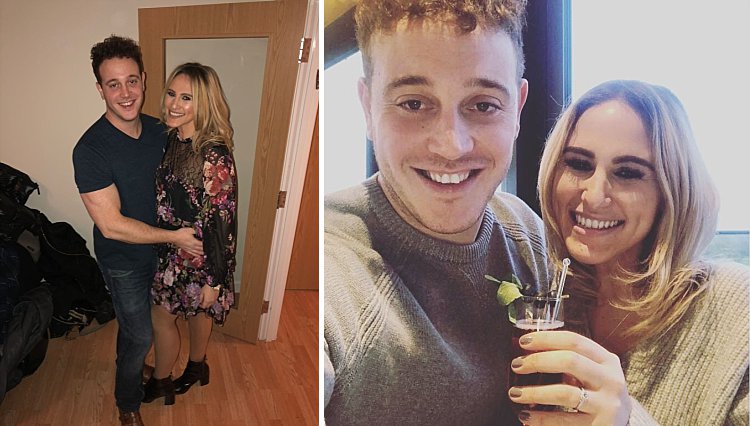 Over the past year and a half of being single I introduced a new dating technique – THE PRE DATE. I was bored of wasting full evenings with boys I knew were instantly not right. So I thought sure I have 2 hours to spare for a coffee or drink to get to know new people but ALWAYS said I had somewhere to be after like meeting my friends or sister after. A Sunday afternoon was the perfect opportunity for a pre date, I am sure many times people saw me in West Hampstead with a different boy!

Anyway, he arranged to meet me in Angel at a bar and instantly suggested he needed to be back for 9.30 (to which I thought — you’re totally stealing my move but was delighted as we were on the same page!) I ended up being half an hour late from a supplier meeting (not a good first impression!) but we clicked instantly. The whole evening was full of laughter and we didn’t finish one topic of conversation, we shared an Uber home and ended the date saying we must meet up again to at least try and finish a conversation!

I remember arriving back home and my flatmate was cooking dinner and she asked how it went, and I said instantly ‘you know what… this one has potential!!’ and the rest they say was history! 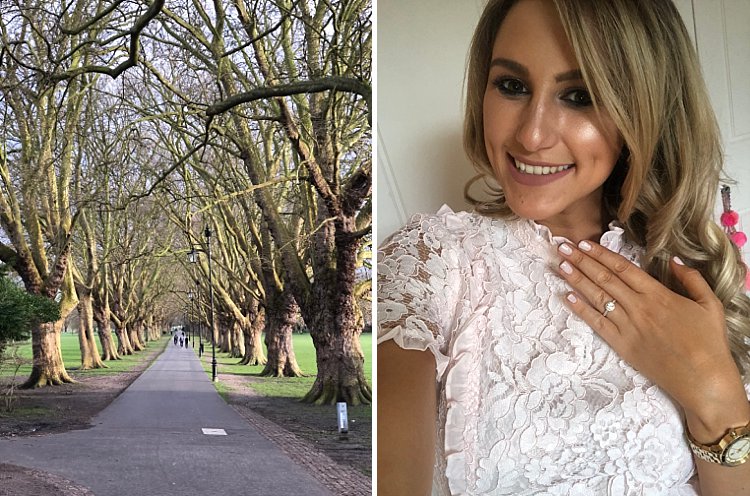 Fast forward to the proposal. We had been dating for 10 months getting to know each other with fun trips away and dates – everything was going well but we hadn’t spoken about the future or getting married. I wasn’t worried though with David I was totally happy being with him and knowing when the time is right it will all work out.

I work in Fashion as a Buyer and was going to be away in Turkey for a buying trip over our first Valentine’s day which I was a bit sad about. But David suggested a lovely day out in Cambridge on Sunday the 11th to celebrate early. We drove there and went for brunch and then punting which all sounds lovely, however being typical England it stared to hail and rain! Luckily there were umbrellas on the boat and I’m sure you’re thinking how romantic this all sounds huddled up arm in arm wrapped in a blanket under the umbrella which David was holding above me… and it really would have been if our umbrella wasn’t broken!!

So we sort of were half getting hailed on half covered trying to enjoy the little ride around Cambridge when all I was thinking was my hair is totally going curly… we still laugh about now! Anyway, after the punting fiasco he then suggested to start walking round the grounds as Cambridge is so pretty. You can imagine my face after his suggestion and I’m thinking he is a mad man suggesting going for a romantic walk IN THE RAIN but he was so insistent I said fine, we can walk back to the car through the grounds as a compromise. (Being the nice person I am… I really had no idea what was to come!)

Luckily it did start to clear up so we started to walk back through one of the parks. There was a path where all the trees arched over, it really was very pretty. We stopped half way and he said he had my Valentine’s day present to give me and to close my eyes and put my hands out (bare in mind again it was FREEZING so I had gross gloves on!) I really thought ‘oooo I hope this is a nice necklace or something’ and tried to peak but wasn’t seeing much. He then said ‘open your eyes’ to which he was down on one knee! I was totally surprised and shaking – it was all a total blur. I think I screamed ‘what!’ Which you can imagine didn’t go down well… David then replied ‘errr not the response I was looking for’ and then I laughed and replied ‘of course it’s a yes!’

The ring was stunning which David had designed himself, the diamond was his grandma’s first engagement ring which he got re set and it’s so special thinking of the meaning behind it. Looking back it was amazing being such a surprise and really not expecting it and I wouldn’t have had it any other way! After the proposal we then drove to a rooftop bar over looking Cambridge and then called both our parents who were eagerly waiting by the phone to hear from us.

As it is quite a short engagement we are doing really well so far and ticking off some major boxes! My dress has already been bought which we purchased from Mirror Mirror in Angel. We had Tash who helped me choose my dress who was excellent and would highly recommend. What I loved about buying it from there is they are all trained dress makers/designers as well — so if you like a dress they can also alter it to anything you want, so I am really happy to make some tweaks to make it my own.

I also joined Smashing The Glass’s Members Club for Brides, VIB club, as you get 10% off (so that’s going towards my veil!)

We have also confirmed our wedding photographer Ran Bergman who also offers a special gift by being a VIB — you can see I love a bargain so taking full advantage of my perks!

We came back a couple of weeks ago from Israel where we picked our venue. But we are keeping it a surprise for our guests until later so cannot reveal much , but I will be able to tell you about all the amazing venues we saw in my next post.

What Marriage Means To Us

Marriage is a big deal to David and I. We are both the same age and waited a while to find the right person. It is really important to have the same values and beliefs something we both believe we have finally found. Since February we have set a date! Our wedding is going to be on the 7th October which is a special date to me. It is my grandparents’ wedding anniversary who have been married for 64 years (so I figure it is a good, lucky date!). We will be getting married in Israel which really means a lot to me, we are both traditional and have a huge connection to Israel so starting life as a Jewish married couple it feels like the best start getting married there.

PS. My best friend is now absolutely mortified she got this SO WRONG! It just shows you never know! 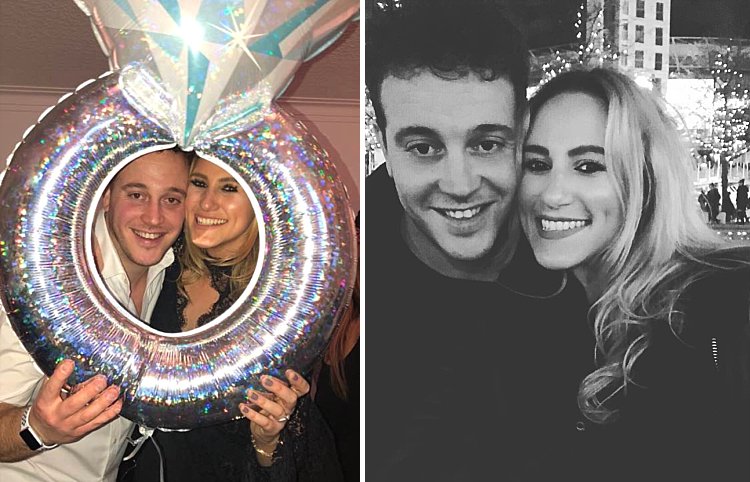 Click here to read all Rebecca’s planning posts to date.