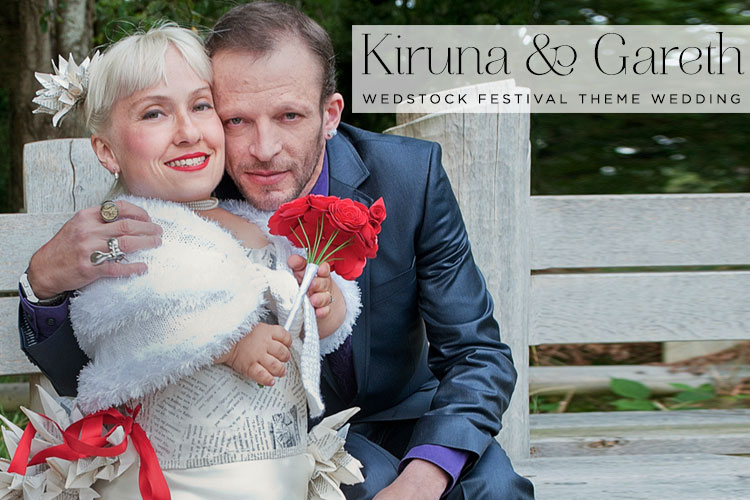 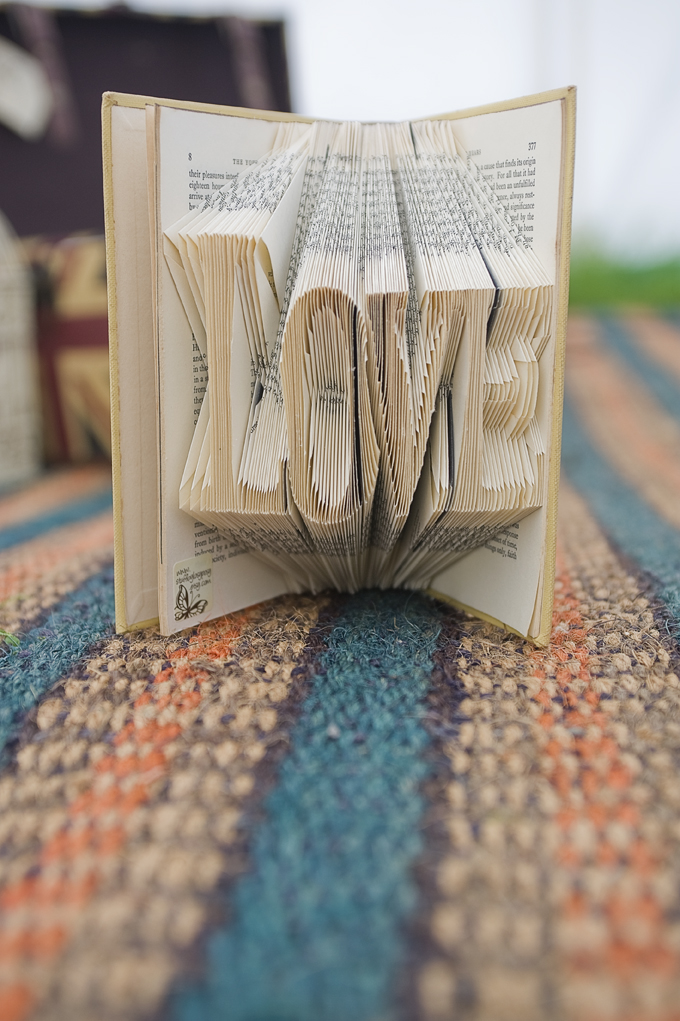 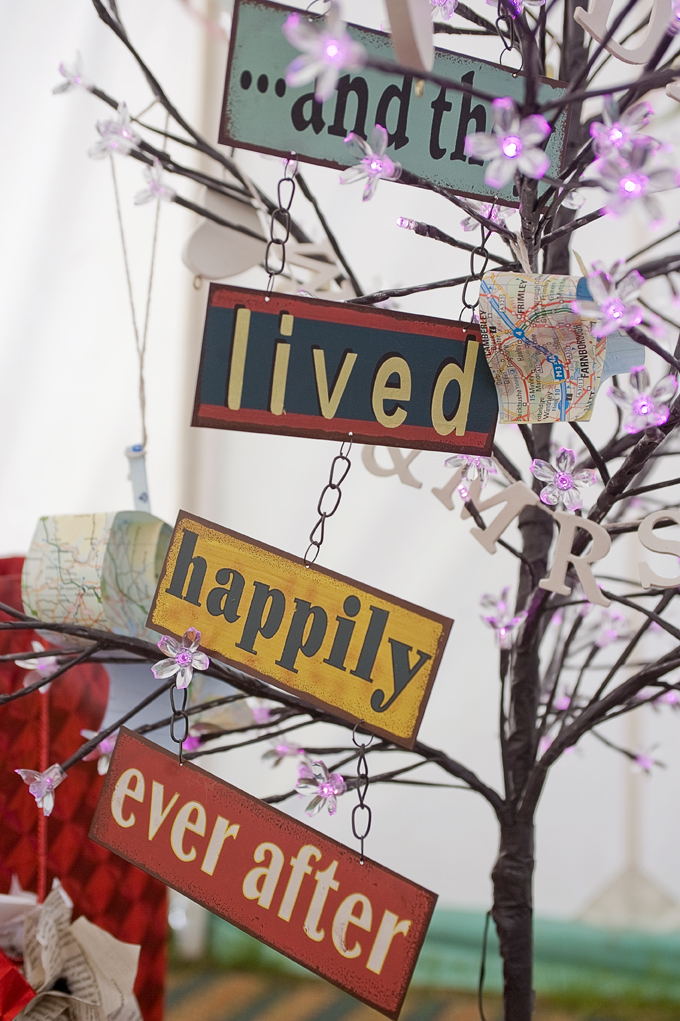 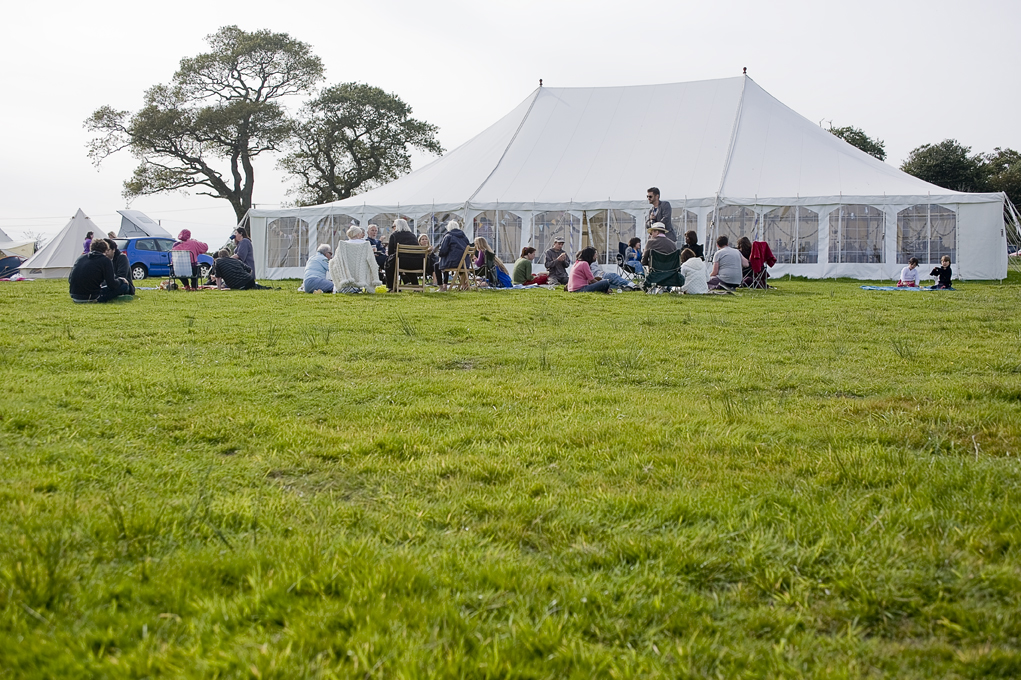 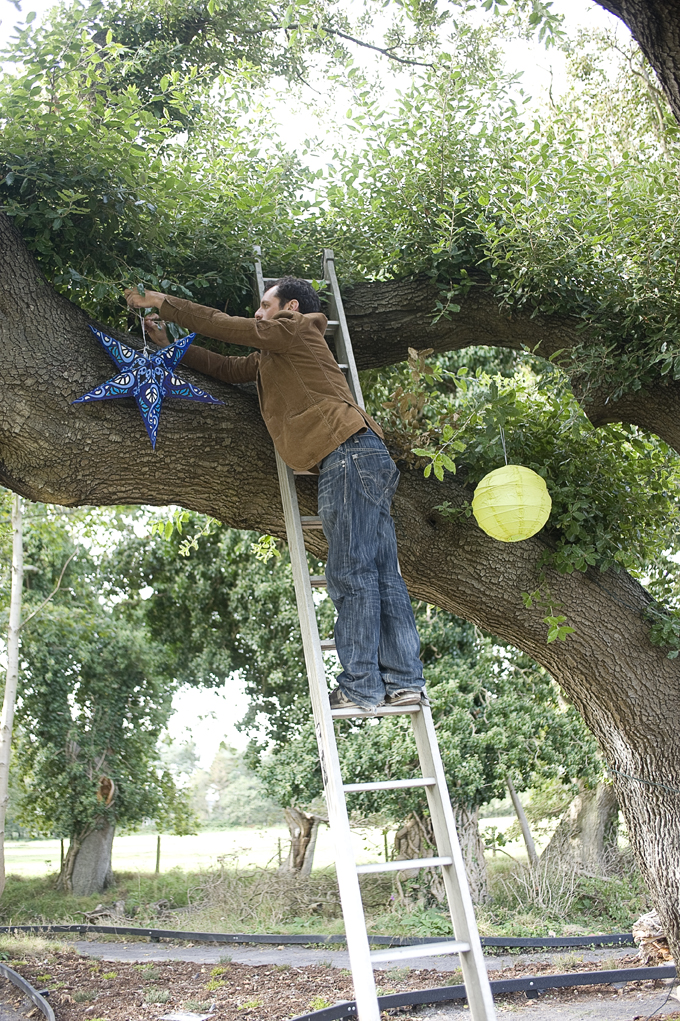 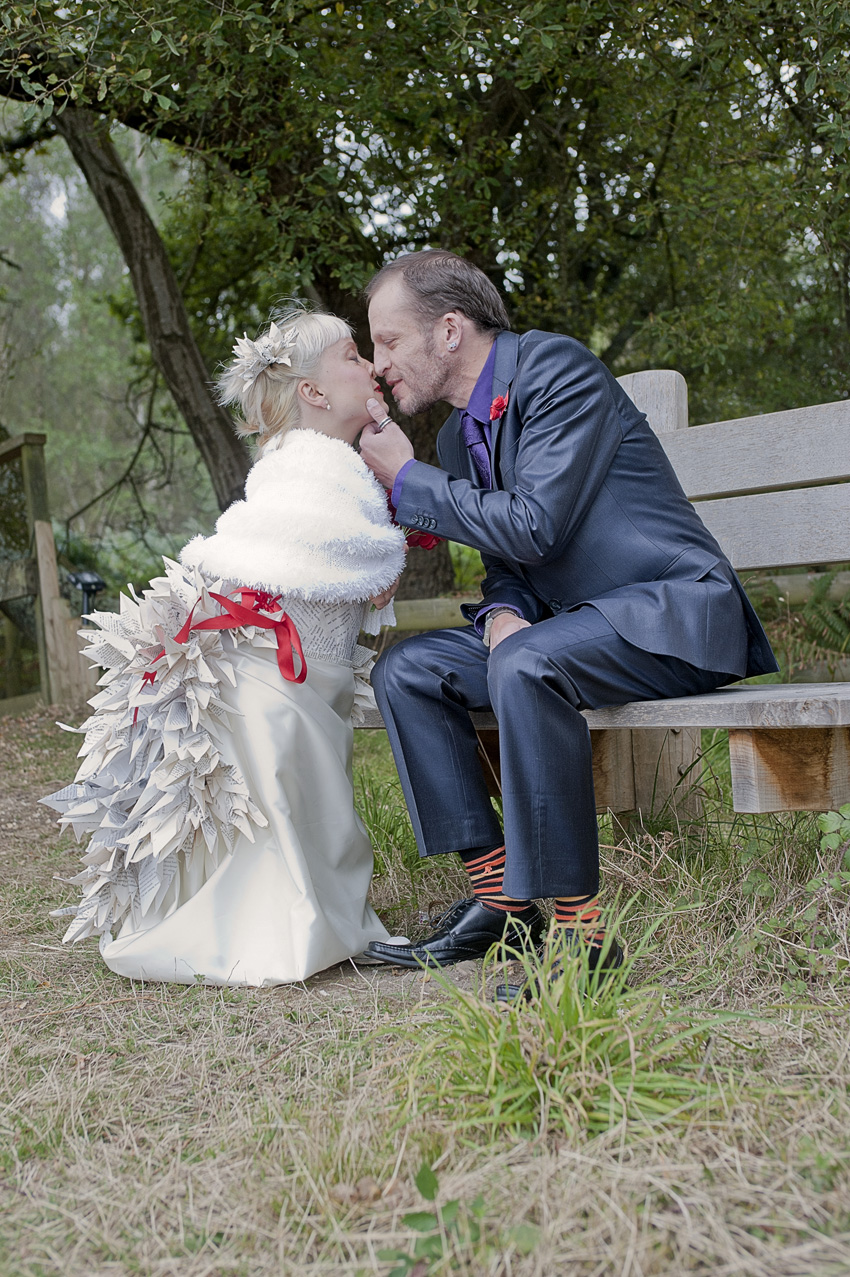 I knew I wanted a wedding dress that was mostly made out of paper. Although it only gets worn once it should be a stunning work of art and the beauty with my paper dress is that I can get it framed and collaged into some kind of artwork which I am shortly going to do. The idea was stolen from the Scottish literary festival where I saw a designer make a dress completely out of paper and I thought WOW. It was also part of our effort to save costs. Alex Wheeler, a stylist friend of mine, very kindly made me the dress as a gift and I provided the material which probably cost me no more than £10.

Alex made a huge bustle of origami paper flowers and the dress itself was literally sewn together on me on top of a paper mÃ¢chà© corset. We had been to a second hand bookshop to buy some books for the ‘dress material’ to go together with an old second hand copy of Alice in Wonderland given to me by a friend. 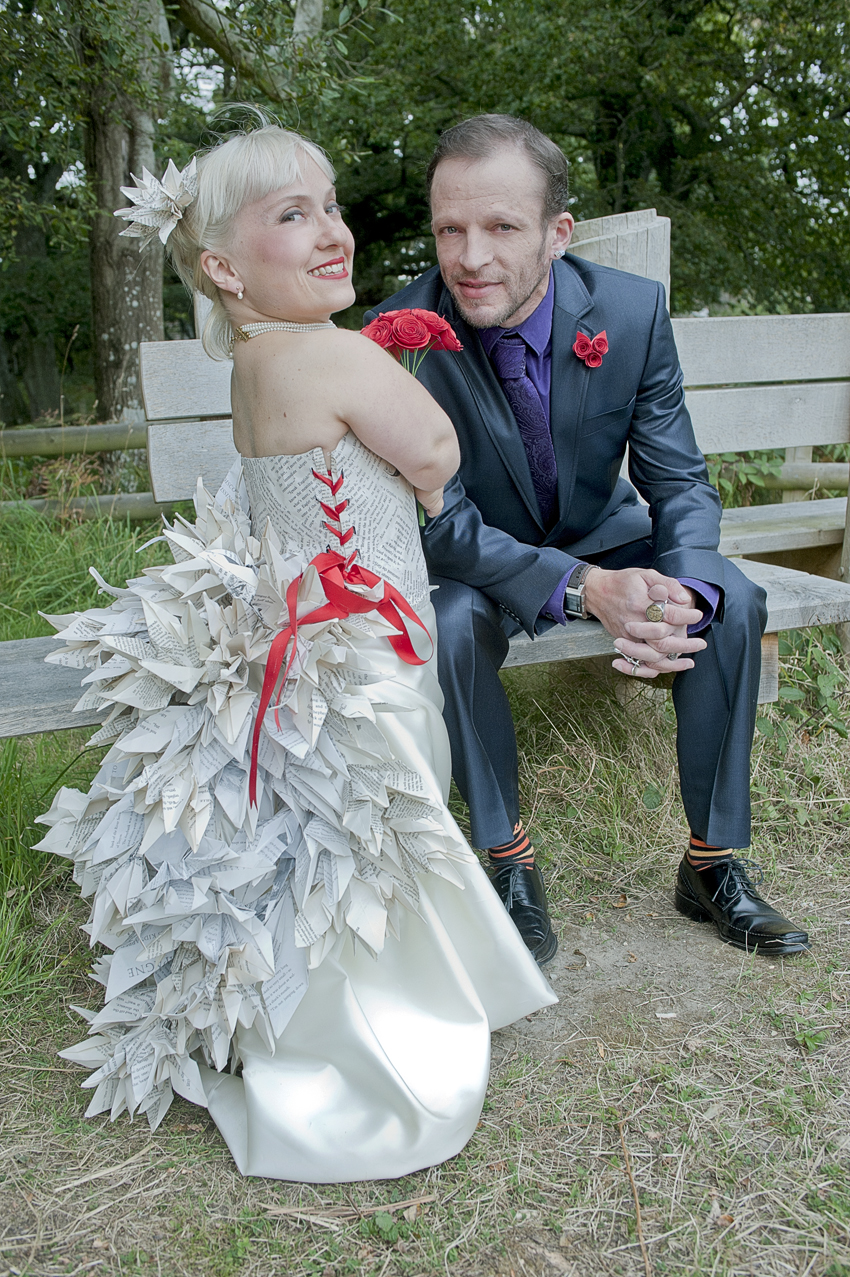 Some of Gareth’s cousins built our chuppah and we put fairy lights and decorations around it all. The chuppah has been used at a few family weddings which is lovely and it was a nice feeling to know that the family had helped build it physically and metaphorically. 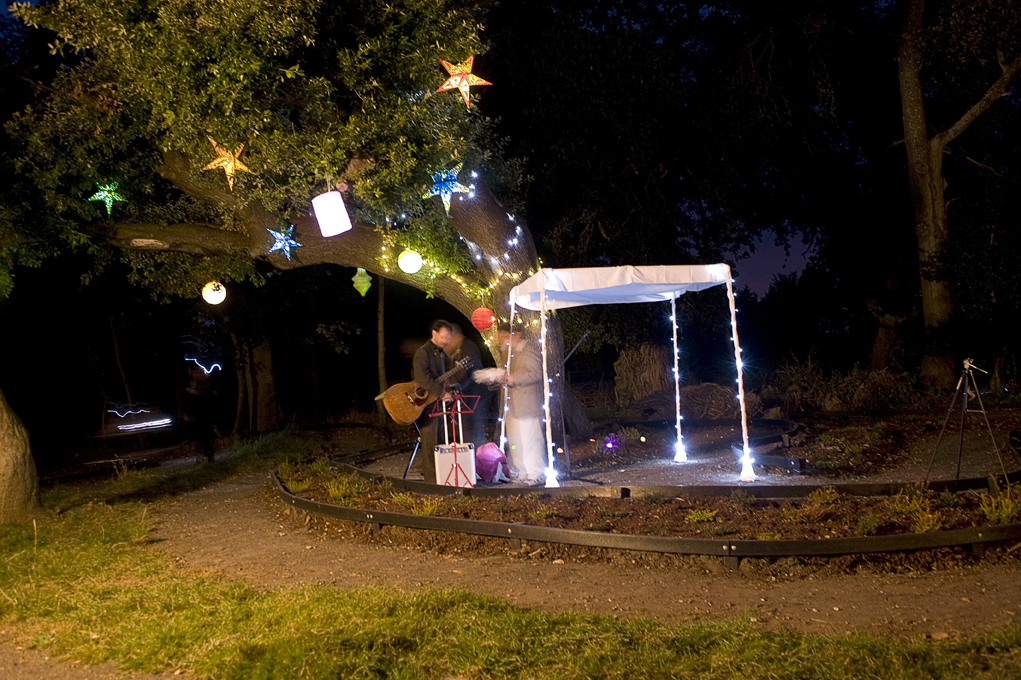 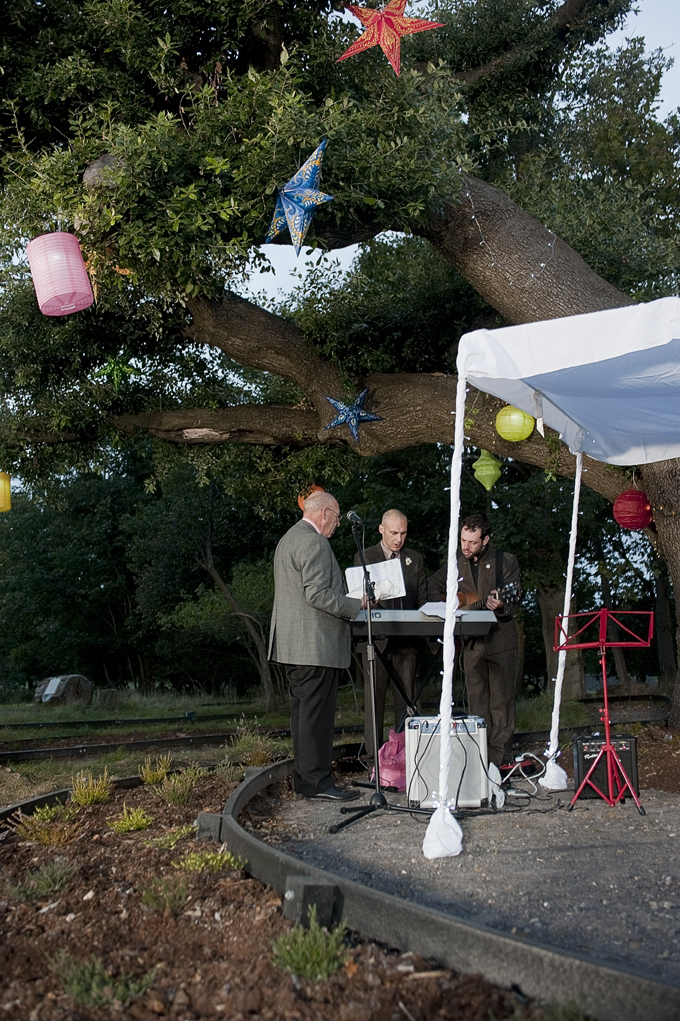 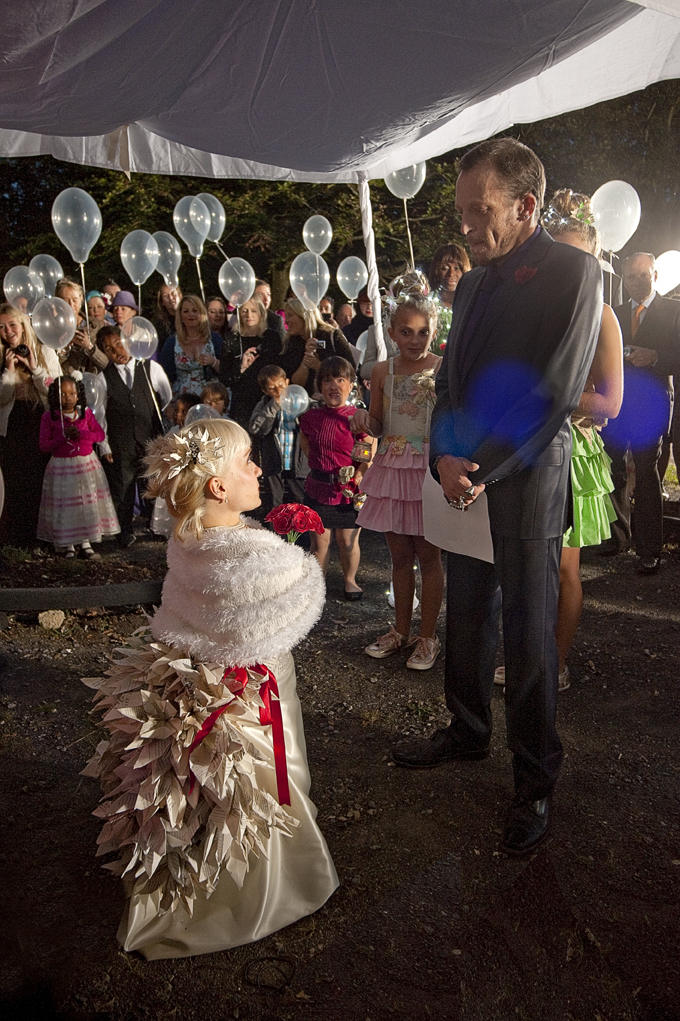 I loved the ceremony under the tree full of lanterns and the chuppah and the fairy lights. Every guest was holding a balloon with a little LED light in it and there was something really magical about that and the beautiful vows that Gareth and I had agreed on and composed ourselves.

Gareth choreographed the structure, the songs, and the word smithing of the ceremony, and sung a surprise rendition of Madness’s ‘it must be love’

We took a lot of inspiration from the film True Romance. The song I walked down the aisle to was ‘True Romance’ with David, Gareth’s brother, on the keyboard and Jonny, Gareth’s cousin on guitar.

We had matching wedding rings from Baroque in Brighton. The ring shapes are slightly wonky, not straight and tidy, and that is another of the little details that made us feel like we were doing things that really represented who we were.

We would have loved a hog roast but of course that was absolutely not kosher. We liked the idea of something self contained and the fish and chip van was a really good solution and there was also some meat alternatives for non-fish eaters. 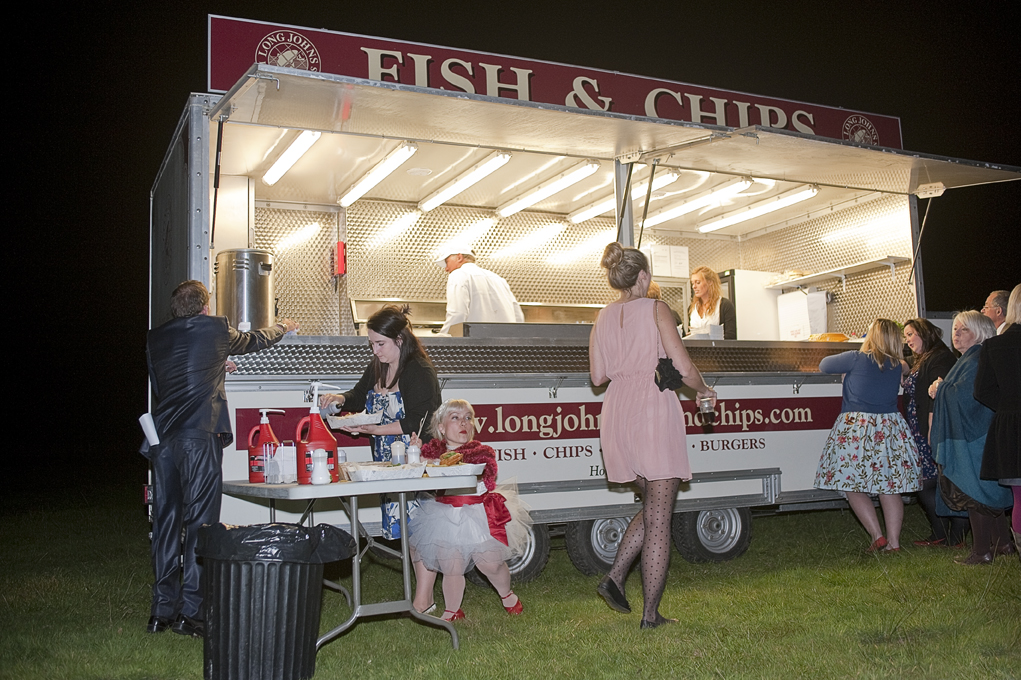 Again great for a budget and one of the best ways to deal with desserts is to have a cake baking competition because people love an opportunity to show off their culinary skills. So many people brought the most incredibly stunning and delicious cakes. 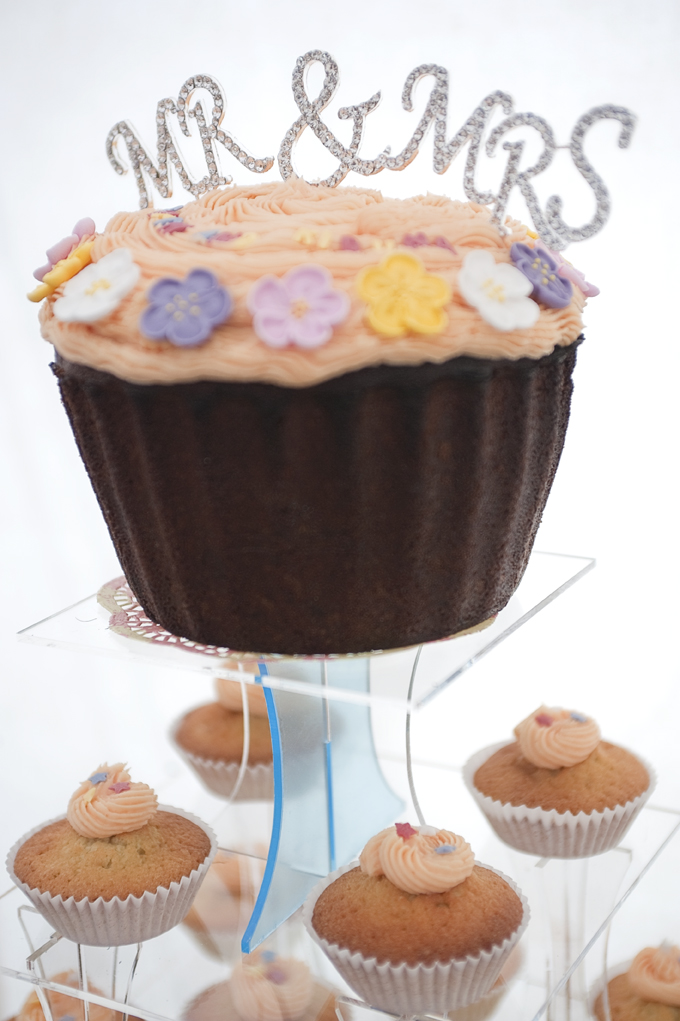 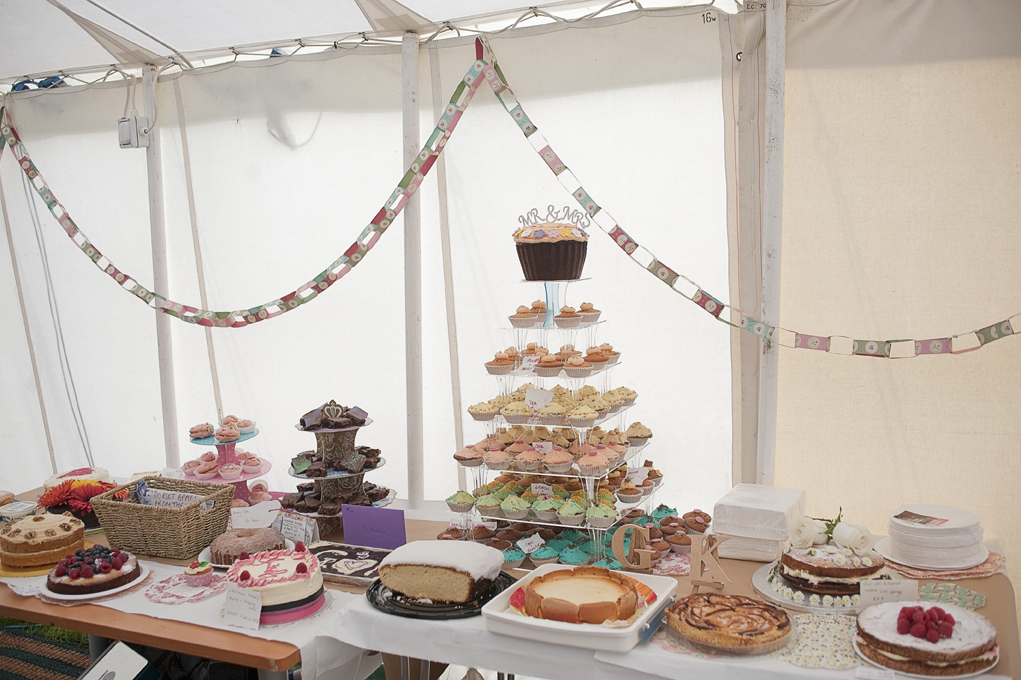 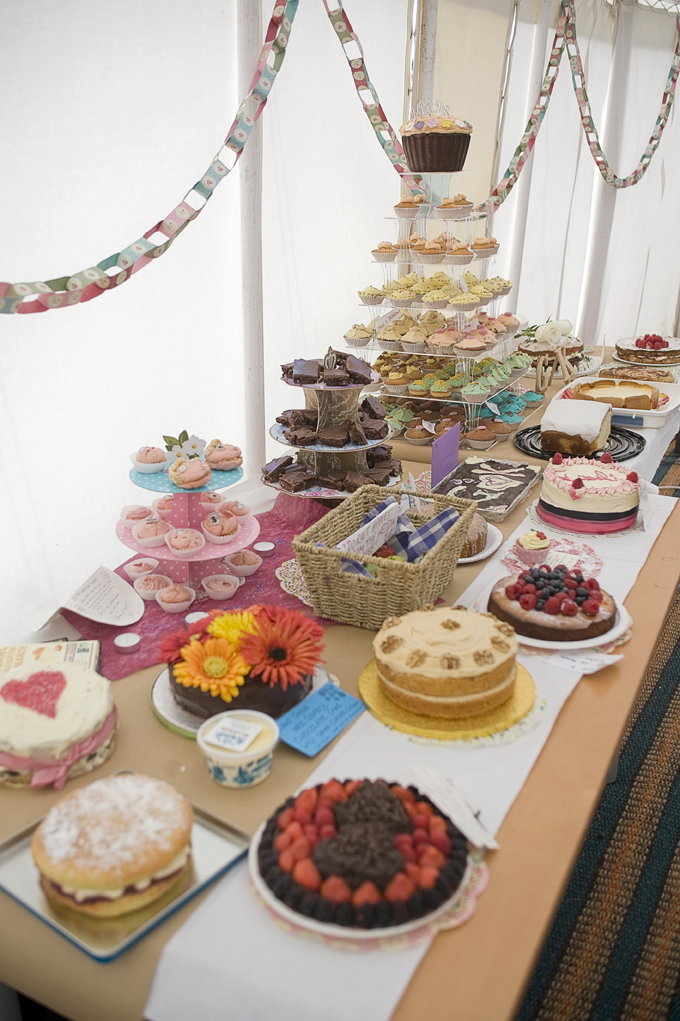 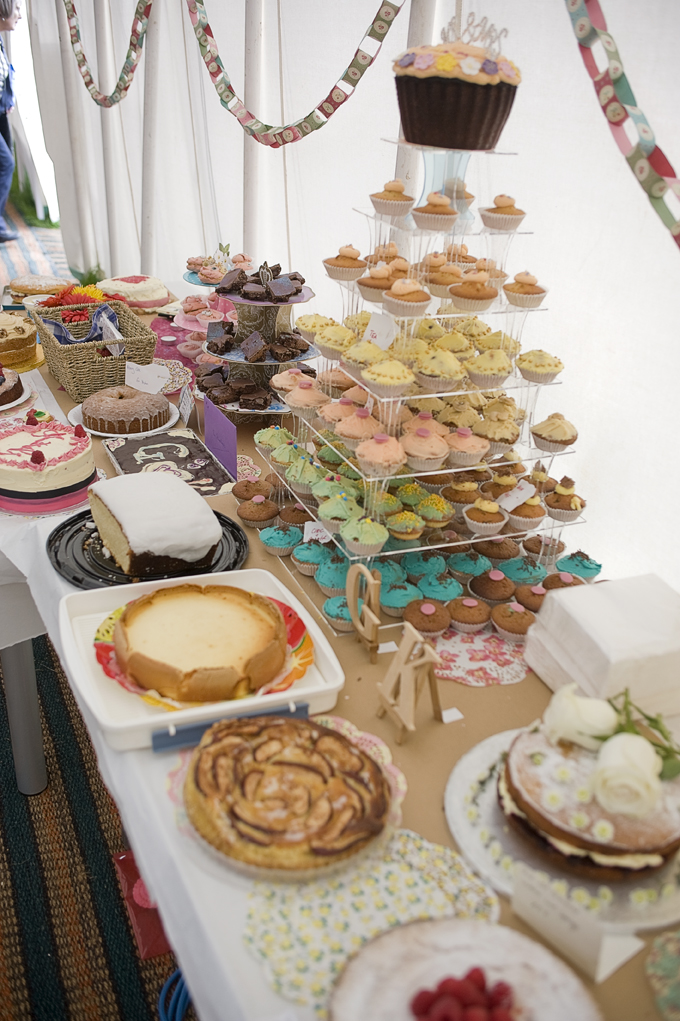 We thought one of the most important things to spend proper money on was the photography. Andrew was a family friend who is a high end fashion photographer – wedding photography isn’t his bread and butter so it was lovely of home to agree to do our photos. 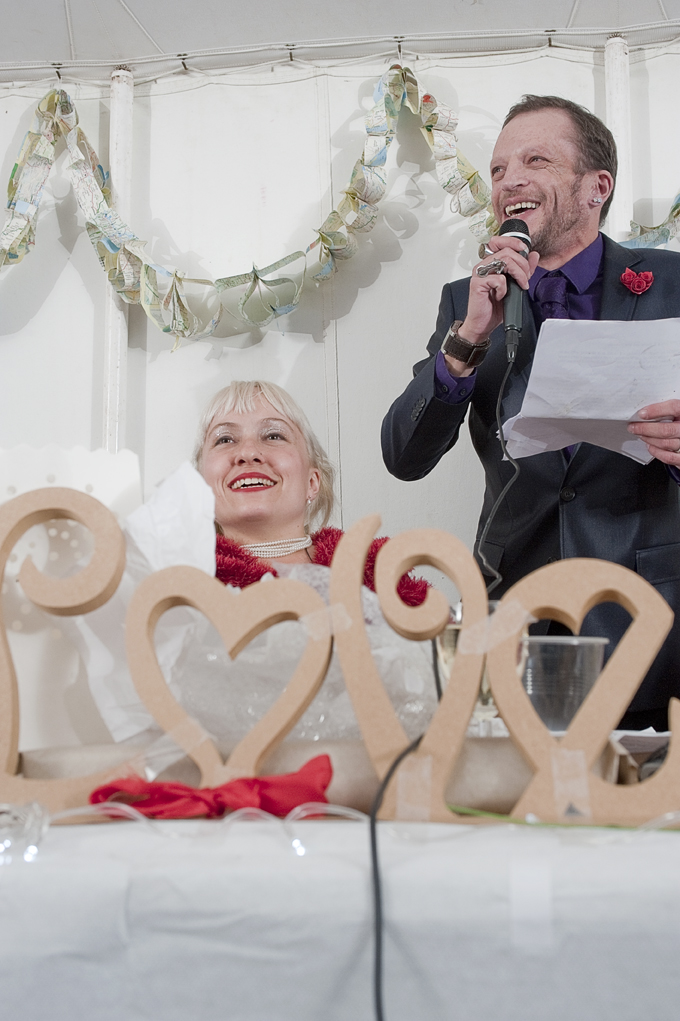 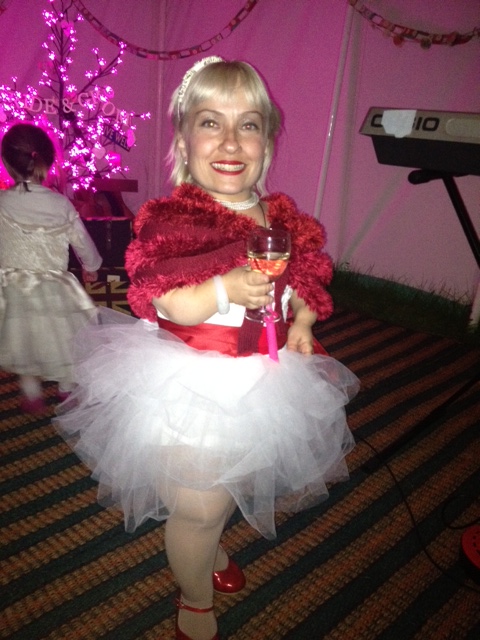 ADVICE TO OTHER BRIDES

It is impossible to spend the kind of time with your bridesmaids or guests that you really want to spend time with. Forget that! The day is literally you hosting a party and you should try and work out meaningful contact with people before and after – you will not get it on the day.

Also this is a controversial one, but pick your bridesmaids carefully. Don’t necessarily pick your best friends! If I would have thought about it I would have picked people who were more organised and more likely to take an active role in helping me ‘do’. It’s interesting because I’ve always thought that the bridesmaids should be the women that you want around you on a friendship and supportive basis, but now I look back, they’re more like your production crew! You need to pick your bridesmaids for that reason – not necessarily the people that you like the best! 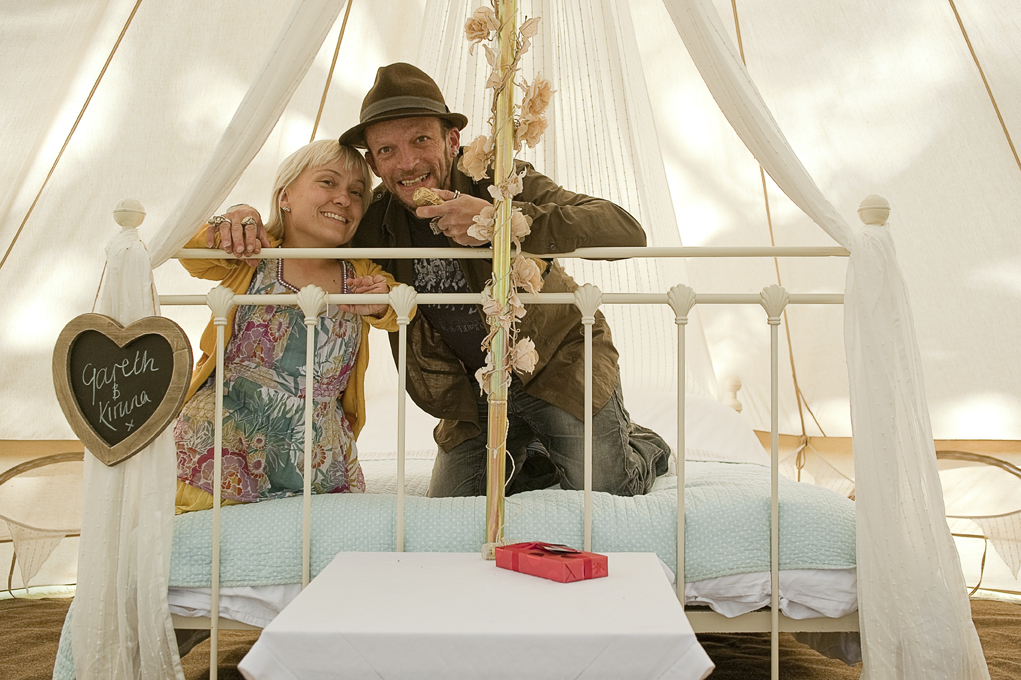 Thank you to the amazing Kiruna and Gareth for sharing their beautiful wedding and all their creative DIY budget-friendly ideas. I love Kiruna’s ‘paper’ theme – it’s so different and so creative. What an inspiration!