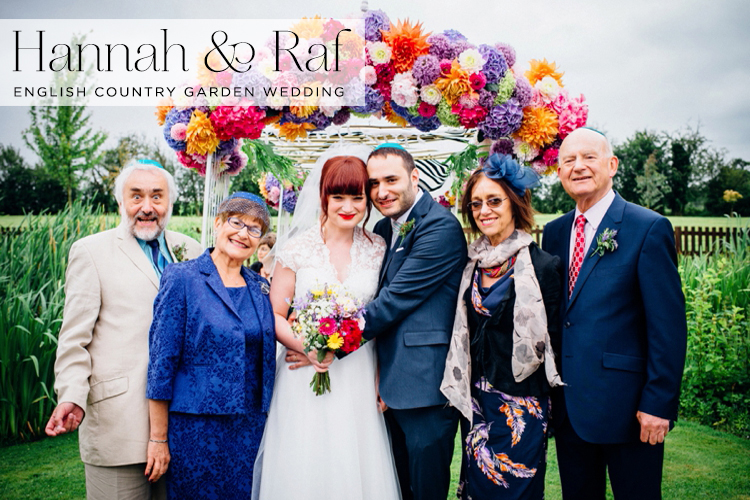 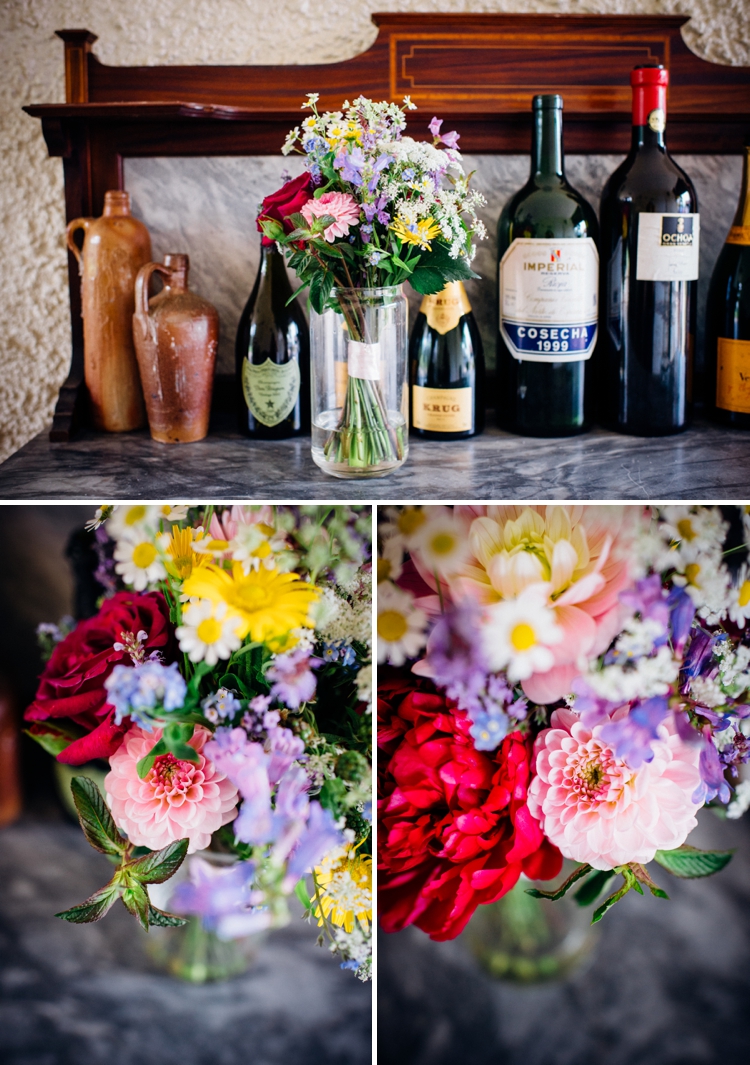 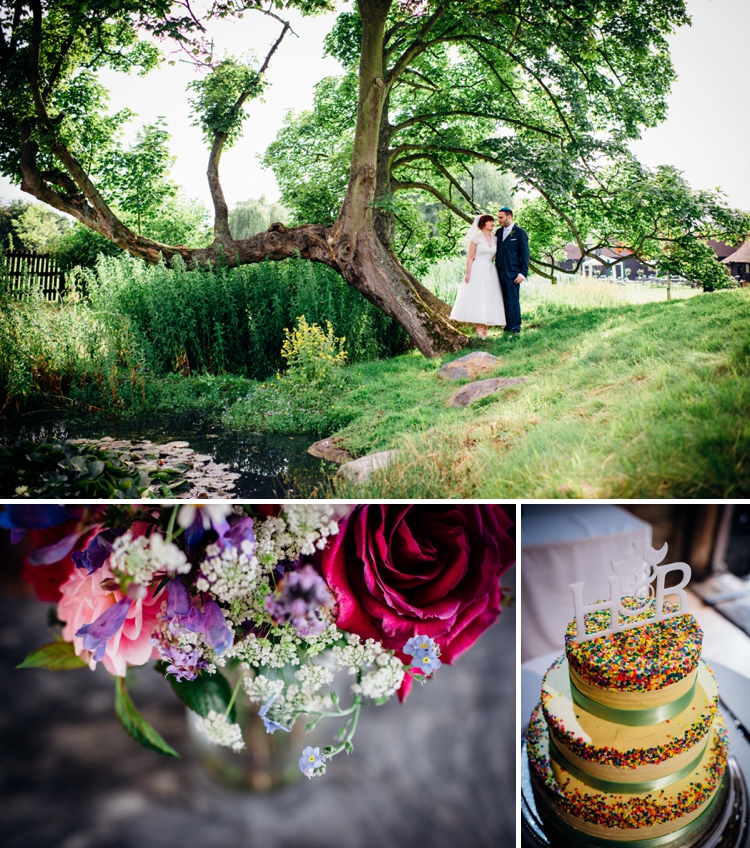 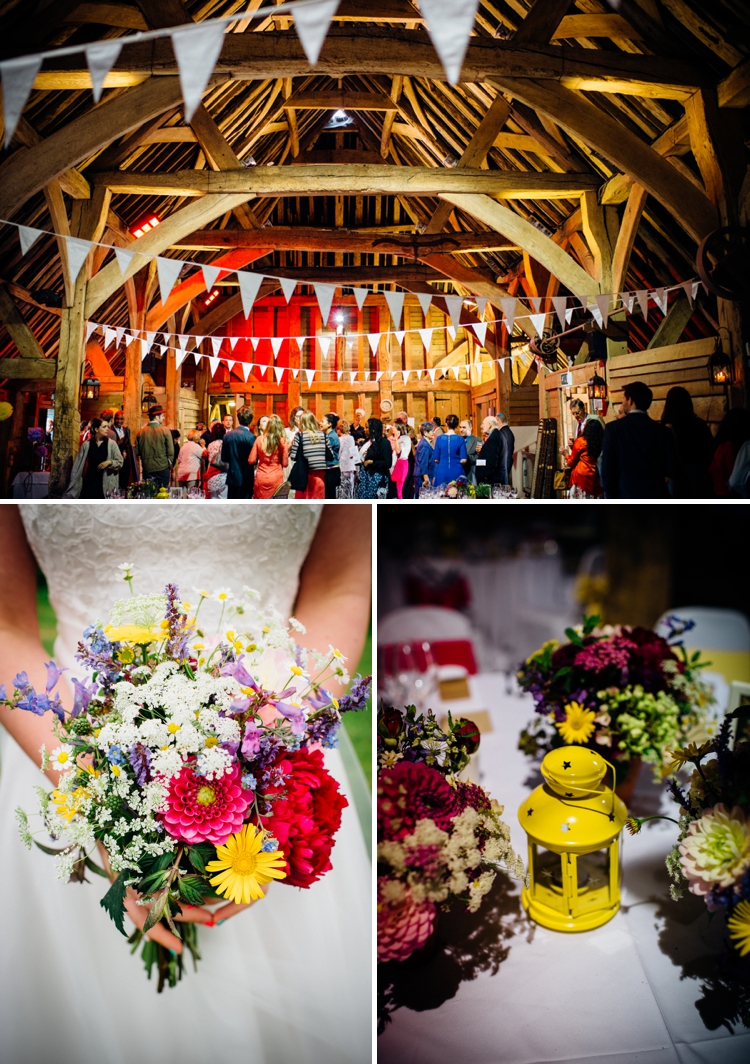 VINTAGE BRANDS + LOTS OF COLOUR!
We didn’t have a specific colour scheme – we just wanted everything to be relaxed and colourful. Our dress code wasn’t formal, we suggested florals. Most of the women took note and so did some of the guys! There was a theme to the table plan – as our surnames happen to be famous 20th century brand names, our tables were all named after vintage brands and we used vintage advertisements as the table centrepieces. 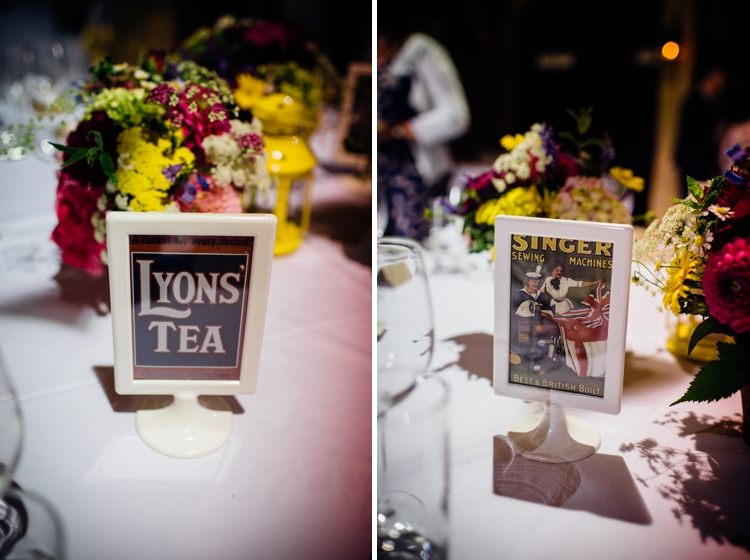 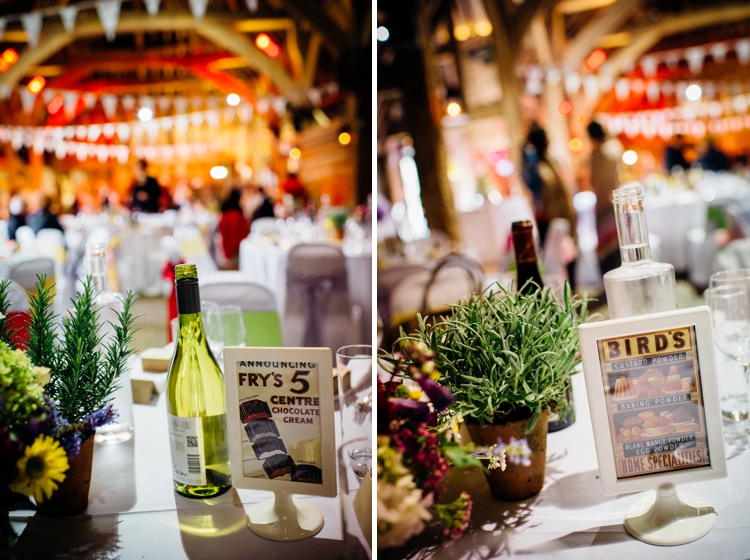 DESIGNING OUR OWN INVITATIONS
We wanted to make our own unique invites. I took inspiration from other wedding blog posts and designed my own stamp. The stamp design was inspired by 1930s Art Deco which fitted in nicely with the table centrepieces. 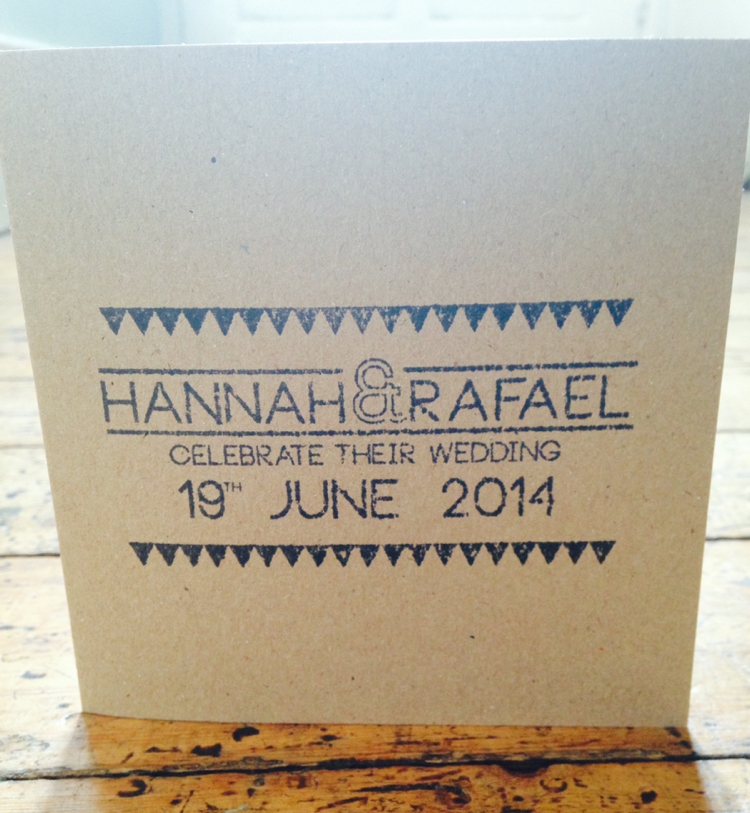 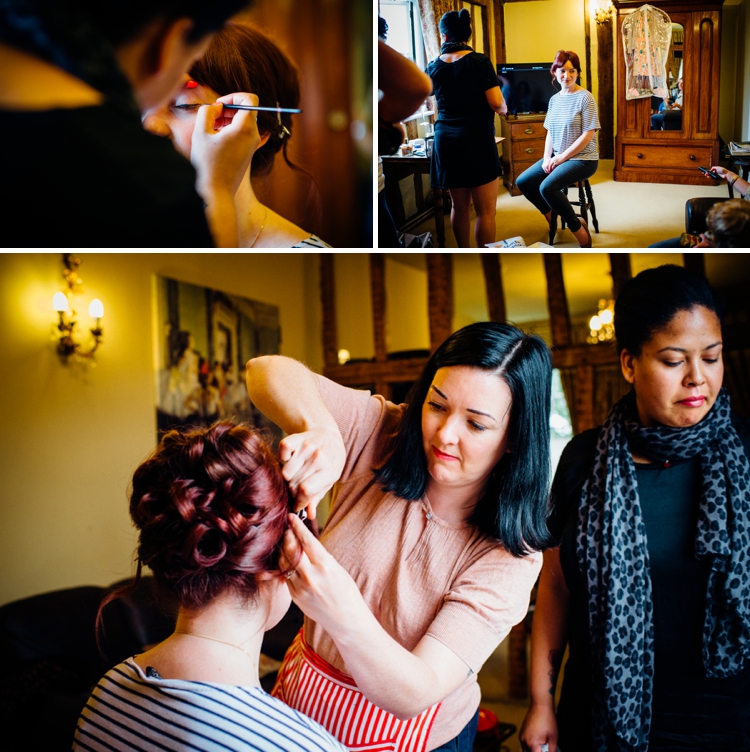 HAIR + MAKE UP
My hair was done by Amanda from Lipstick & Curls and she was amazingly patient with me! It took a long time because I’m a fusspot when it comes to my hair! My make up was by my friend Sian Khoza who is a make-up artist for L’Oreal.

A TEA LENGTH DRESS
The dress was from Pure Couture in Beaconsfield. I saw the dress on Pinterest when I was looking for tea length dresses – it was the Sincerity 3720 and I managed to track down one in my size. It was about to go to a wedding show so I had one day to decide whether to go for it. It was the first and only dress that I tried on! Me and my friends cut short the day and went to a Harvester for an all-you-can-eat salad bar! 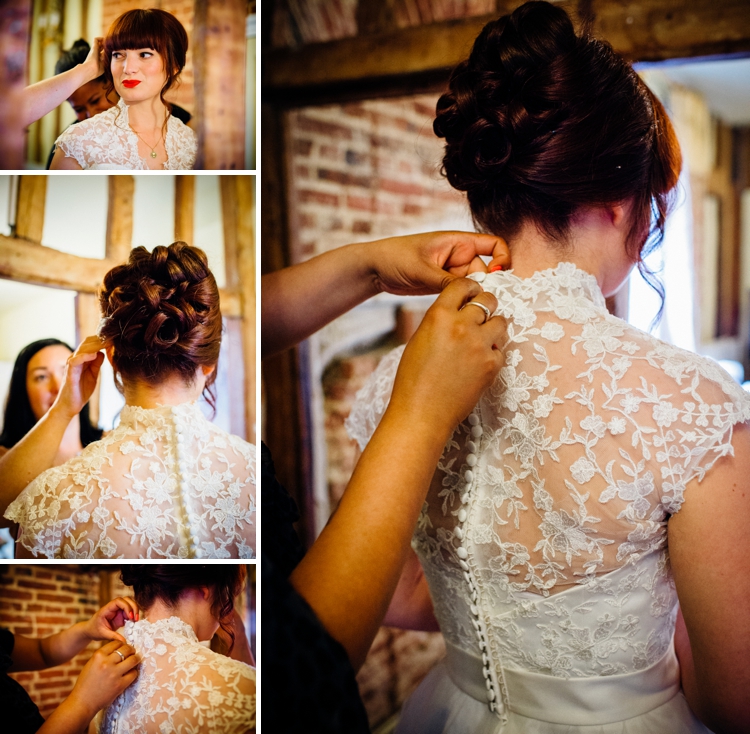 ACCESSORIES
I had a plain veil which I also got from Pure Couture. I didn’t have anything in my hair or any jewellery. I wanted the only jewellery to be my wedding ring.

SPARKLY SILVER SHOES!
I wore silver-glittered Red or Dead Lindy Hop heels. I found a pair on eBay that were my size and so I got them with the help of an auction sniper. I am notoriously bad in heels but these were really comfortable. 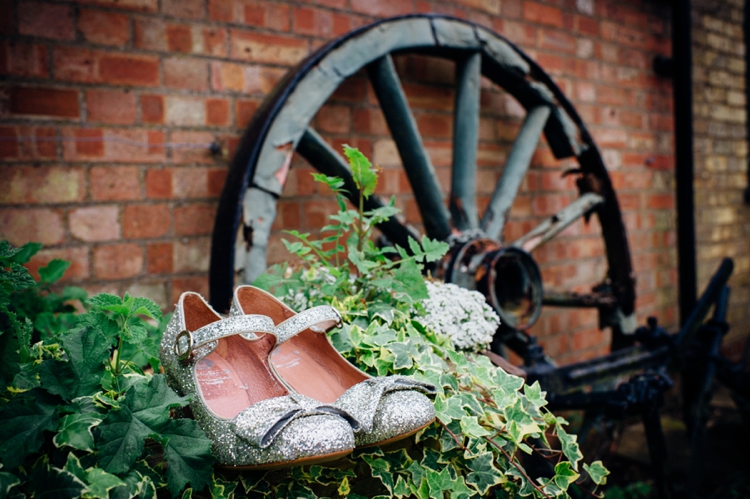 THE HANDSOME GROOM
Raf  wore a three piece dark blue linen suit from Zara and brown brogues from Ted Baker. The men were given turquoise kippot.

FLOWER GIRLS + PAGE BOYS
I decided not to have any bridesmaids and opted for a mob of flower girls and page boys, four of each, all under 9! The girls wore cute floral dresses from M&S and the boys wore linen outfits from Monsoon.

THE CEREMONY
I wanted my childhood rabbi Frank Hellner to officiate. He had retired and was currently doing the cruise ship circuit, but very kindly agreed to join us in our special day. I wrote our own order of service which was based on the Liberal Judaism service with some additions. We made sure to explain the wedding ceremony in the order of service because lots of guests were not Jewish. 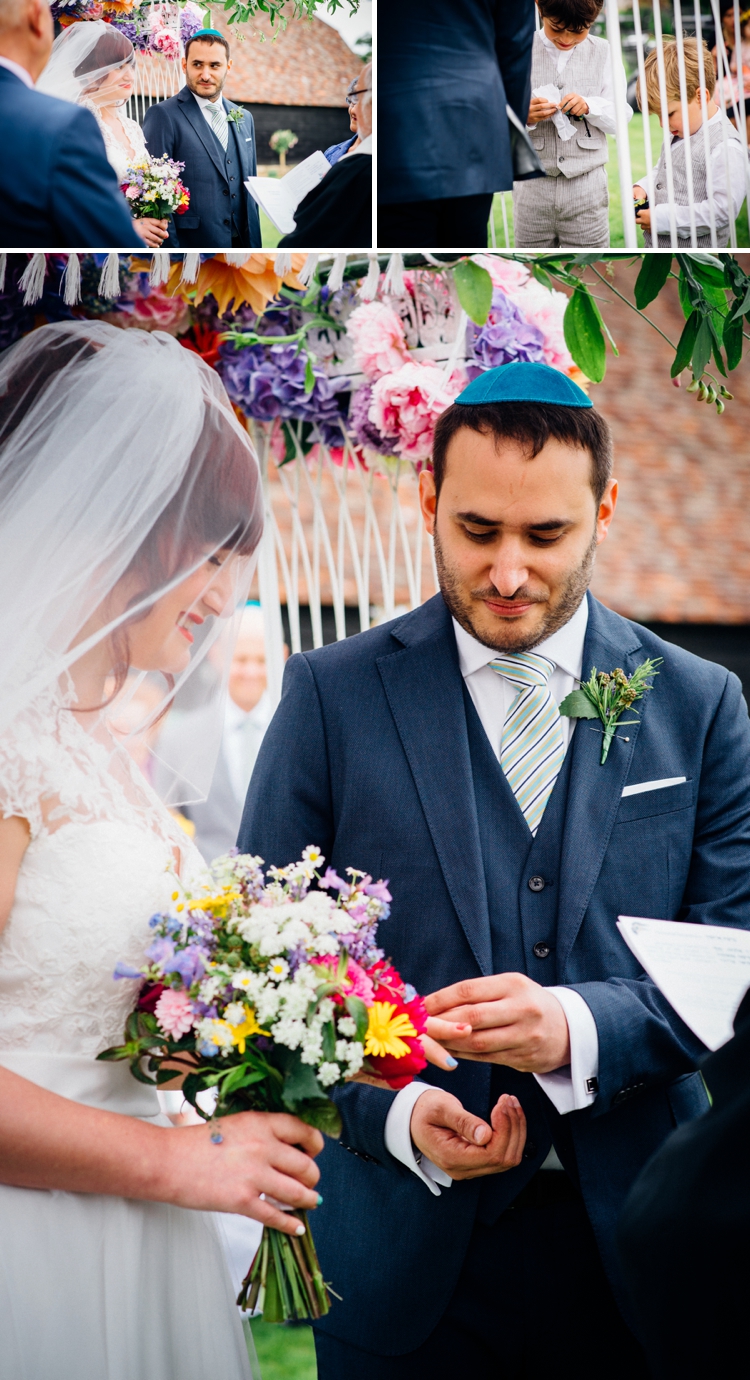 CHUPPAH DESIGN
Our chuppah itself was used in my older brother’s wedding and had got a bit rusty! We spent a full Saturday sanding it and giving it a new coat. Over the years it had developed a jaunty angle, but this just added to our laid back happy day!  Pel Mercer  who did our flowers added the most beautiful colourful flower arrangement that I’d ever seen!

The chuppah had to be taken back early so all the flowers were taken down. Much to our surprise, all the children snuck off during the meal and took it upon themselves to plant the flowers into flower beds in the garden! It was so beautiful and made for some exceptional photos! 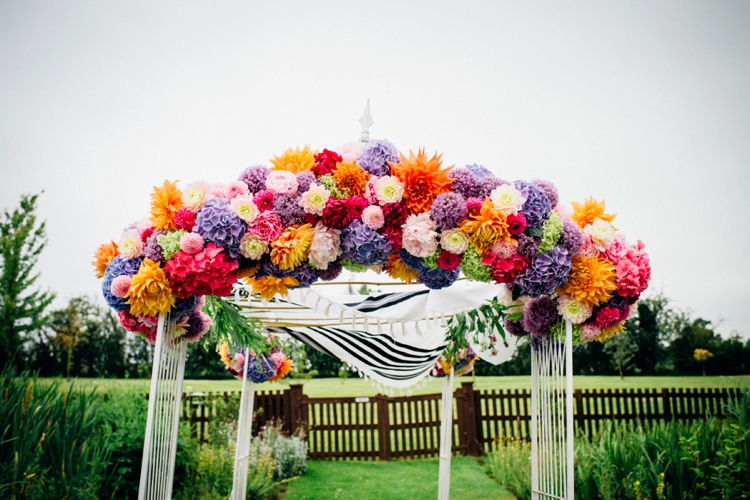 MUSIC FOR THE CEREMONY
I walked down the aisle to Nobody Knows by The Beach Boys. This was played by my older brother and his band The Pomegranates. The Beach Boys hold a special place in my heart because my dad would always play Pet Sounds when we were driving on holiday. It was really special to have my brother do this for me. 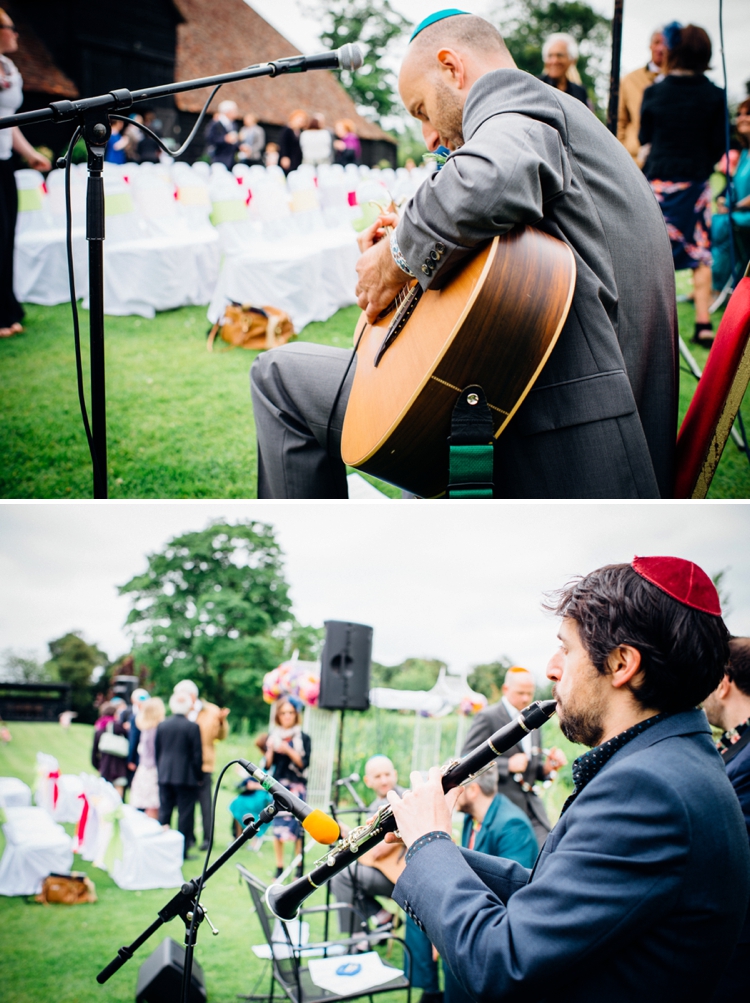 WILD  ENGLISH SUMMER FLOWERS EVERYWHERE
My florist was my friend Pel Mercer. We decided the theme would be wild English summer and went for as much colour as possible. She made the most beautiful chuppah arrangement I had ever seen! The tables had potted herbs so that it wouldn’t just look like summer, it would also smell like it too! The men had herbs and wild berries as their buttonholes. The flower girls were given daisy heads to throw as they walked down the aisle. 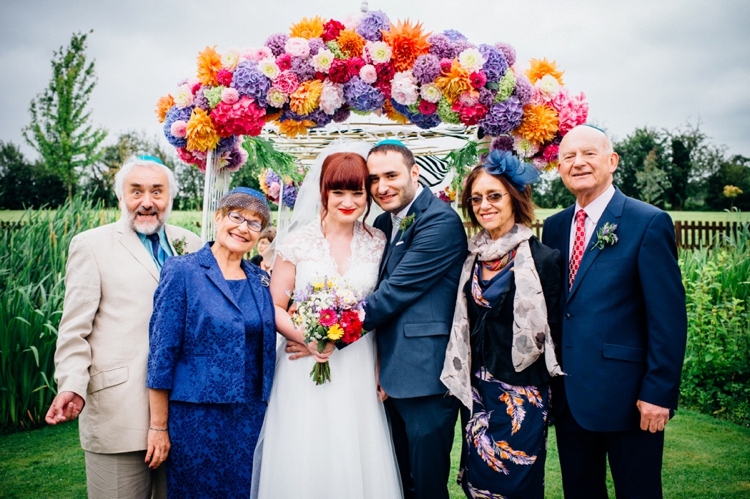 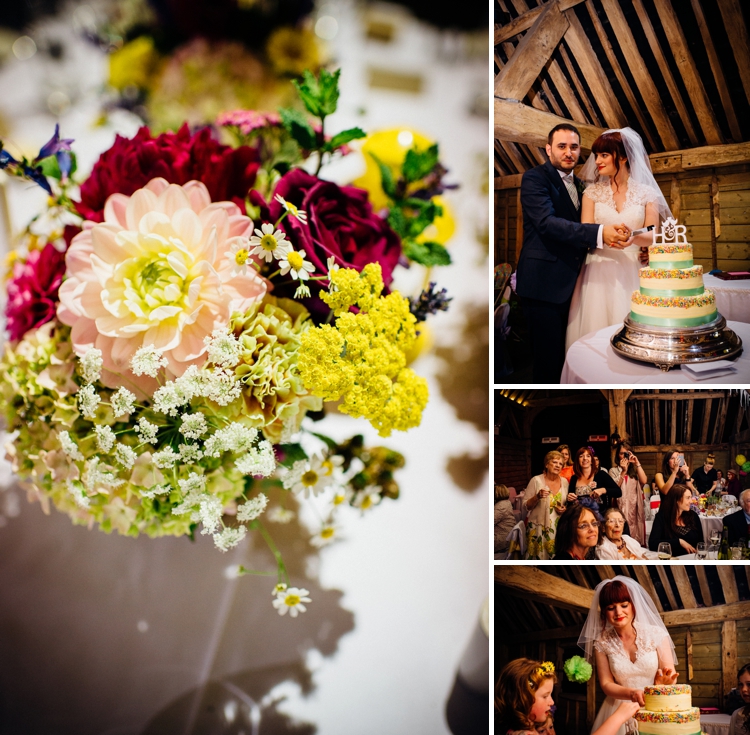 A HUNDREDS AND THOUSANDS WEDDING CAKE + BROWNIE FAVOURS — ALL BAKED BY THE BRIDE!
I co-run a bakery  called  Batch Bakery  so I had to bake my own cake! I baked it with my business partner. It was a three-tiered madeira sponge with lemon curd and raspberry buttercream filling. I’m a big kid and so opted for it to be smothered in hundreds and thousands! I LOVED IT.

I also baked my own favours. These were salted caramel brownies in small boxes. 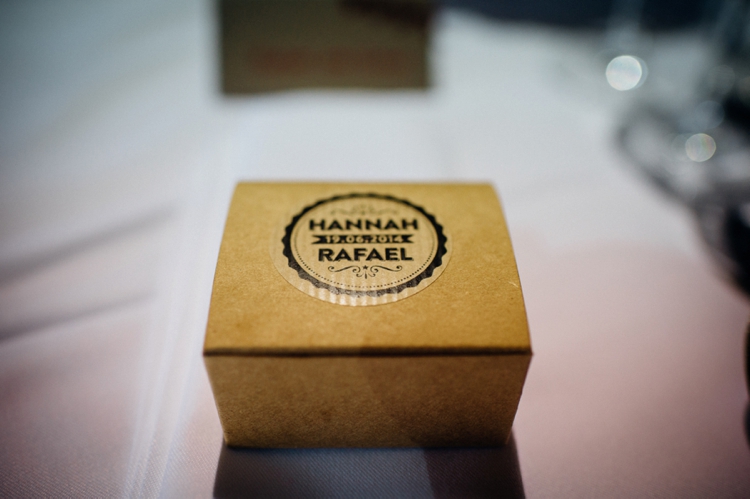 NON-OBTRUSIVE AND NATURAL PHOTOGRAPHY
Our photographer was Marianne Chua. We knew she had to be our photographer as soon as we saw her website. Her style was completely non-intrusive and natural. We didn’t want posed shots and wanted her to capture the atmosphere as she found it. We met her in Camden and immediately hit it off – it felt like a great date! This was so important to us as she blended right into the wedding and took all the candid shots that made our wedding album so special.

LOTS OF MUSIC FROM KLEZMER  TO INDIE, ROCK AND DISCO
My brother and his band played at the ceremony. They played traditional Jewish songs from around the world including Ladino, traditional Israeli folk and they even snuck in a Klezmer version of The Final Countdown!

My brother, his wife and his friend Mark DJ-ed for the disco. This included cheesy wedding pop, RnB for the ladies and a special indie rock disco to finish off the night. Not only was the dancefloor heaving, somehow Mark organised an impromptu line dancing segment which was chaotic but amazing fun. We also did some traditional Israeli dancing including being hoisted onto chairs! All of this was just perfect.

FIRST DANCE TO SPINAL TAP
Our first dance was a bit out-there. At first, we couldn’t decide on anything in particular – we don’t have “a song” together. However, Raf is an old-school metaller and I’m an indie kid. We both love This Is Spinal Tap and thought that Stonehenge would be hilarious and fun. We also thought it was a great way to involve the children who would join us, like the dancing dwarf-druids in the film! My brother did an amazing intro for it and we had green lights and dry ice just like in the film. We even spent our last pre-wedding night together constructing an eighteen inch-replica of Stonehenge! 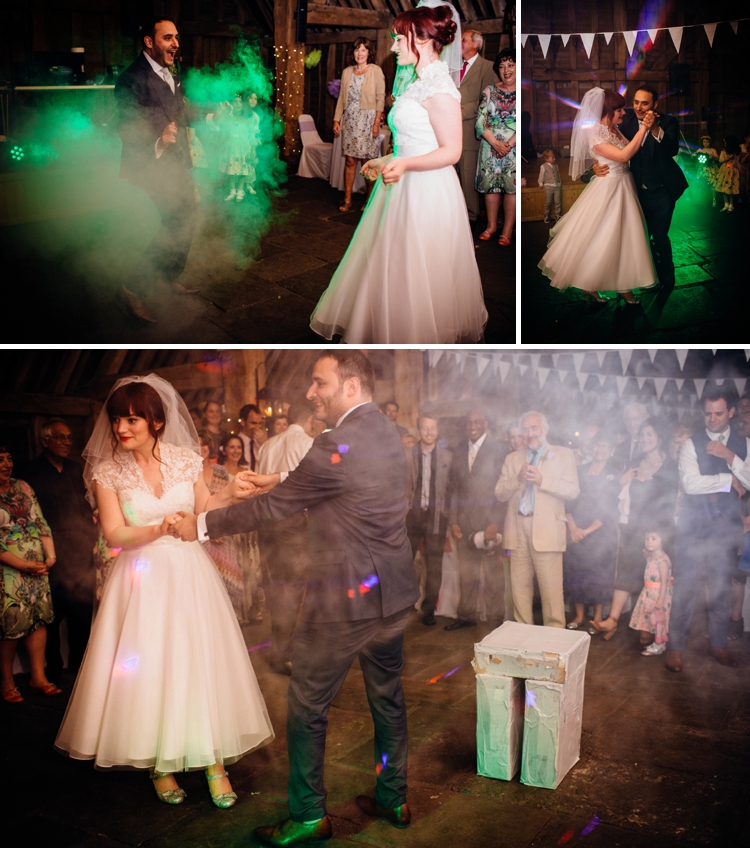 ADVICE TO OTHER BRIDES
Try not to be a perfectionist and relax! It’s about having a good time and being yourself.