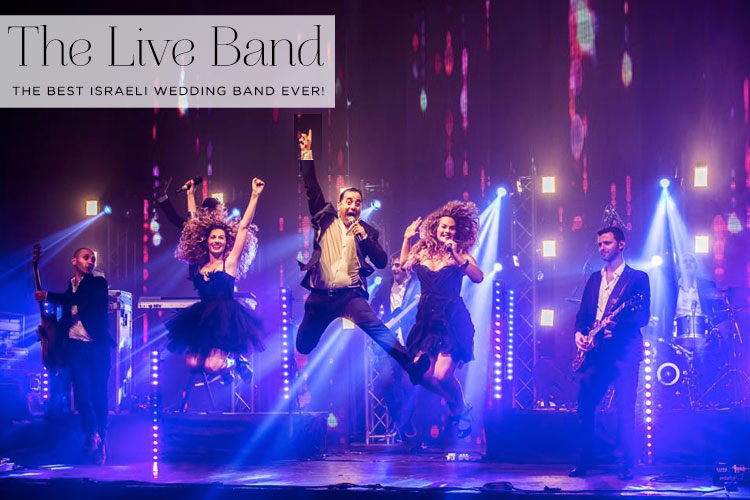 We love an Israeli wedding here at STG and have covered everything from spectacular to super casual Big Days, as well as more recently, a heart-achingly gorgeous Jerusalem tale.

For many, Israel is the ultimate Jewish destination wedding; it is the most spiritual place on earth that you could choose to make this special commitment to your partner. And while it carries momentous cultural meaning, that’s just one side of its nuptial allure. Israel is also a place where east meets west, where the sun shines eight months of the year, it’s beautiful, exotic, energetic and FUN. You’d be hard pushed to match the vivacity and heady enjoyment of an Israeli bash — and where there’s a party, there’s music!

If you’re thinking of heading to Israel to marry your beloved, I implore you to follow this amazing Tel Aviv based party band, The Live Band.

This eight-to-fourteen piece outfit really is THE Israeli wedding band. Incredibly professional, energetic, charismatic and super glamorous (think tailored suits and glittery cocktail dresses), The Live Band know exactly how to create a performance that builds energy and excitement throughout the night.

They can whip the crowd up and have them eating out of the palm of their hand with their belting tunes, incredible stage presence and outstanding repertoire. From Hava Nagila to Uptown Funk they will find a playlist to suit you and your guests perfectly. Don’t believe me – just watch!

Have Atmosphere — Will Travel

Luckily The Live Band are set up to do international gigs, so whilst they are Tel Aviv-based, fret not as they can, will and have travelled anywhere in the world to bring the party. So you can have the big band Israel-style delivered to you wherever you are.

Traditionally, an Israeli wedding is more about the DJ but increasingly people are now turning to bands – as an alternative or as an addition – to give their wedding that extra pizazz, the real showmanship and explosive atmosphere that only live music can bring. And that’s where (aptly named) The Live Band. step in.

The Live Band’s musical signature, lead by founding members Yuval Niv and Yonatan Fridge, in collaboration with incredible vocalists and super talented instrumentalists, is a polished, upbeat sound, delivered with incredible energy and performance. There’s no singing from song sheets like the dreaded wedding singers from films. They are experienced, professional musicians who love what they do and have played with the top singers and bands in the Israeli music industry — Rita, Shlomo Artzi, Idan Raichel, Ivri Lider …

You just cant replicate that magical moment when all your favourite people in the world are all on their feet, dancing to the same (perfectly chosen, well-timed) tune, smiling, singing, hands in the air and of course one of two with their eyes closed, lost in the moment. And that’s what this Tel Aviv band bring. If there is one thing The Live Band knows how to do, it’s how to make a party explode!

Music at a Jewish wedding — Chuppah to Hora

Music brings so much character to a wedding day and for me it really starts to take hold during the ceremony. And just as Israel is spiritual yet fun, so it works that after the stirring singing under the chuppah which feeds the soul, there is nothing better than cutting loose on the dance floor later, having the bride and groom hoisted on two chairs, dancing the hora, followed by chart topping sing-along classics.

As another of our Smashing Suppliers, Blake Ezra so perfectly puts it. “If there’s one thing that most non-Jewish guests know about a Jewish wedding, it’s that someone is going to be lifted on a chair and there’s going to be some crazy dancing.”

And the music is key. It’s paramount. For some it’s the most important part of the wedding. And I agree that it shouldn’t be underestimated or put secondary. It is after all the atmosphere that carries the wedding along — creating beautiful long lasting memories. 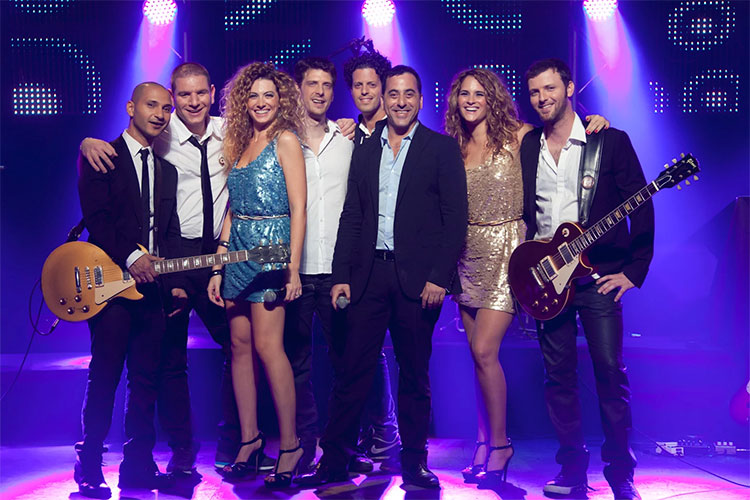 The Live Band’s incredible range of music, with its timeless Jewish classics – and contemporary favourites, is an oasis of soaring choruses on the dance floor.

This band of incredible vocalists and super-talented musicians can seamlessly move from current pop, soul, hora, 70s Disco, Rock ‘n’ Roll and Latin music — they excel in all genres.

Take a look at the clip below of The Live Band — from will.i.am’s Bang Bang, Abba’s ‘Yes Sir I can Boogie’, ‘Hava Nagila’ to Shakira’s ‘Waka Waka, I mean really, how could you not want to be there?!

The production and their extraordinary range is absolutely breathtaking, and when you see The Live Band on stage it’s clear that this is well honed, tight knit squad. In fact the band members are the best of friends behind the scenes and boy, it really pays off in their live performances. 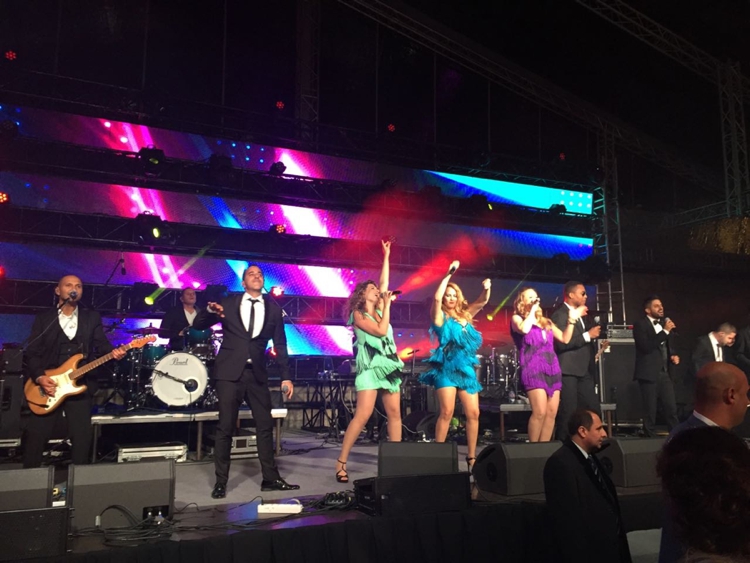 Each wedding crowd is different, dependent on their age range, where they’re from and their music taste, so to avoid the dreaded wedding cringe moment of an empty dance floor you need to have a band that can understand and work a crowd.

With 10 years of experience in private events, The Live Band have become experts in ‘reading’ the crowd and in customising a show in real time according to your guests vibe and response. The band can play hundreds of songs by heart (no sheet music on stage) but there is no pre-determined set list, because of the simple fact that each event has its own special dynamic and style, and there is no real way to determine in advance the repertoire that will fit best.

Your party is in the very capable hands of the bandleader who can assess the crowd, react quickly and choose the right song at the right moment.This is a crucial talent in order to make a foot stomping, arm waving party and The Live Band have that ability in spades.

The starting point is 10,000 EURO, but the final price will depend on the venue, number of performers, amount of technical equipment and the event’s date.

Also to note is that The Live Band has just launched a new DJ based band called Electro, which is much less expensive. It’s a high-energy group that features club anthems, and would be perfect for the “after party” section of the evening. Contact Live Band to see how you can turn your venue into an awesome nightclub.

What makes a great wedding? A great atmosphere…

We all know that when planning your wedding, the majority of time is spent organising the aesthetics – choosing the perfect dress, the knockout venue, and the exact angle of the outdoor chuppah billowing in the warm breeze. And while this is all crucial, it’s important that choosing the music and the entertainment is not an afterthought. It is possibly the most important thing for building the atmosphere, especially for the guests. It breathes life into the day and ignites the senses.

If you are looking for a high octane, supremely professional, insanely impressive, dance floor filling band, who will create a brilliant atmosphere and a wedding that everyone will be talking about for years to come, then you best double check availability with Live Band before you send out those Save The Date cards.

And if a destination wedding to Israel is not on the cards, they can and will bring the Israel party spirit to you — we can’t recommend them enough!

The Live Band are a Smashing The Glass handpicked sponsor and this is a sponsored post.
Find out more about sponsored posts here.

All imagery: The Live Band 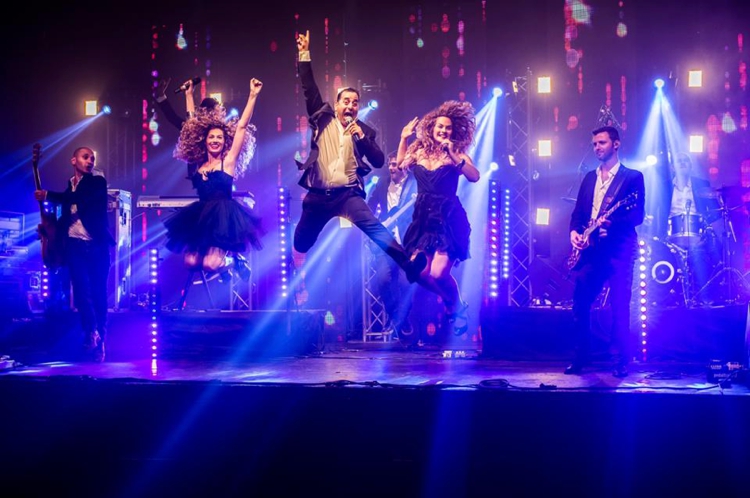