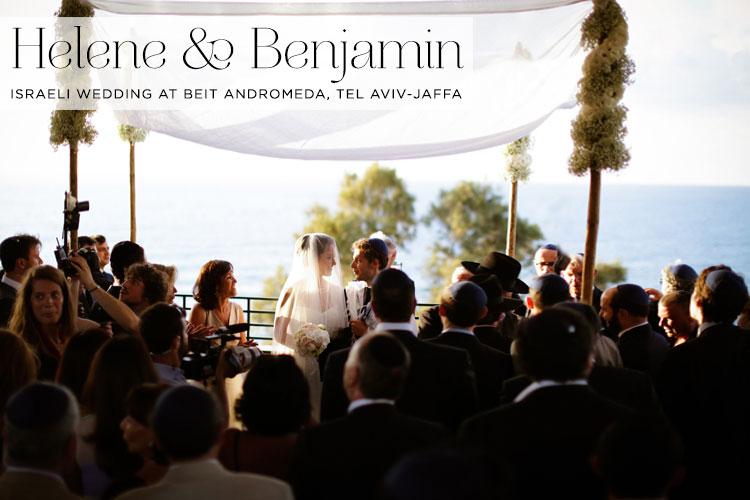 In my book, making your wedding day into a holiday is an absolutely brilliant idea. Not only do you get to throw a wonderful party for all your loved ones, but you also get to do it in a place where the weather stands a better chance of behaving on the big day!

Parisians, Helene and Benjamin, did just that with their destination wedding in Israel and organised a whole heap of pre-wedding festivities for their guests as well as the big W-Day itself. So not only did they create an utterly sublime wedding day in Old Jaffa (with the help of much-loved Smashing Suppliers RS Eventime), they also put together a mountain of events for their guests so that they could get a flavour of the city of Tel Aviv. This was a really thoughtful gesture as many of their guests had never visited the city before.

There was a cocktail party, a beach party (I *so* want one of those Keep Calm and Play Matkot tote bags) and a third pre-wedding party at the Tel Aviv Museum of Art. Such wonderful ideas and all expertly planned by the lovely Sophie and Ravit from RS Eventime.

Helene’s Rosa Clara dress is amazing, and both the bride and groom look like celebrities. The light that Pierre Mikael Cohen has captured is sensational as are his beautiful cityscapes.

I must also single out Helen’s ‘rock princess’ Jimmy Choo‘s. Er… wow. And that she secretly took singing lessons in the months prior to the wedding so that she could surprise her groom with  a rendition of ‘their song’. Double wow. Every single element of this wedding ties in together so perfectly and I’m so thrilled to be bringing you this well deserved ray of sunshine this rainy Tuesday morning

Thank you to Helene and Benjamin for sharing their delicious destination with us. Let’s hand over to the gorgeous bride…

Helene, the Bride: Benjamin and I met in New York five years before we got married. Ben lived in New York and I was looking for a new flatmate… I was coming to NY for an internship and was looking for an apartment… that’s how we met! We were roommates to start with, but one month later we became a couple, and since then we’ve always lived together — in New York and back in Paris. The funny thing is that we’d attended the same high school in Paris but didn’t know each other back then… END_OF_DOCUMENT_TOKEN_TO_BE_REPLACED