When a pair of artists plan a DIY Jewish wedding, it’s pretty much guaranteed to be something special. But even so, the boho backyard wedding of Britt and Adir exceeded our wildest expectations.

The bride, Britt, is the mega-talented ketubah artist and beloved Smashing The Glass Recommended Vendor BRITcolors – she makes incredibly unique ketubot, and as far as we know is the only one out there making embroidered and beaded designs – and as if that weren’t enough, she’s also a freelance interior designer.

Groom Adir is a poet-singer-songwriter who’s also working on his master’s degree in clinical social work, running sales for a friend’s construction company, AND moonlighting as a private kosher chef.

So clearly there’s a ton of talent going on there, and it doesn’t hurt that pretty much all of the bride’s family are artists too – plus plenty of the couple’s friends. And they all came together to throw one amazing, unique, ultra-personal wedding in Britt’s parents’ backyard in Zichron Ya’akov, Israel.

The couple focused on making the most of the lush greenery and bright colors of the garden, working lots of watercolors (the bride’s specialty) and florals into the day. We’re obsessed with photographer Tomer Ben Simhon’s luminous photos, which capture all the emotion AND the gorgeous artistic details so perfectly.

Naturally the bride designed her own ketubah, and we’re in love with the one-of-a-kind creation she came up with. In her work she regularly utilizes embroidery, layered watercolors, and gold flake paint – but until crafting her own ketubah, she’d never combined all these elements together into one. The finished product is a real stunner – you don’t want to miss this beauty.

We also love that in keeping with her DIY, low-key style, the bride opted for a non-traditional boho chic dress from Free People. There’s so much more to say about this awesome wedding, but we’ll let Britt tell you the rest herself…

Brit, the bride: In October of 2013 I was living in Florentine, Tel Aviv. I was starting my second year at the Holon Institute of Technology and went to my local print shop to print out an assignment. It was very early in the morning and I was the only one there, right when they opened.

Moments later, Adir walked in, dressed to impress (he was working in finance) and stood next to me waiting for his order. Excited to finally meet what I thought was a slightly older, more “serious” guy, I struck up a conversation only to learn that he was just another musician printing flyers for a show … and was a few months younger than me. He insisted on giving me a flyer even though I said I wouldn’t come. When I heard his music, I knew I had to send him a message. He responded by asking me out on a date. We met the following night, and have been together ever since.

END_OF_DOCUMENT_TOKEN_TO_BE_REPLACED 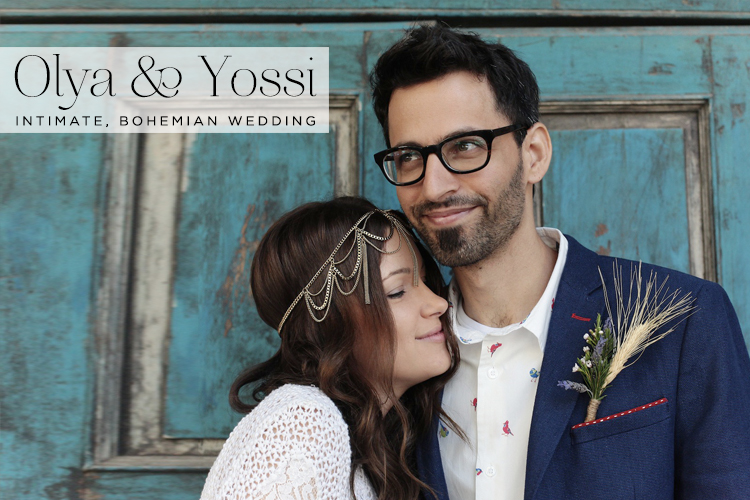 Oh this is such a beautiful wedding. I’m so very excited to be blogging it, and what’s more, the story of how Olya and Yossi met is quite simply a modern day fairytale, with good ol’  Instagram at the epicentre of their tale!

Olya was looking for a vintage hebrew typewriter and posted a picture on  Instagram of what she was looking for. Yossi saw the  picture after one of his friends ‘liked’ it, and he then dropped her a message telling her he owned one that she might just be interested in. Originally from  Israel, Yossi had just moved to Los Angeles, but that didn’t stop the two of them from carving out a beautiful love story via email, Skype and all manner of 21st century technologies.

Olya says. “We are still wondering how this all magically happened, but here we are now together, sharing the same last name and that turquoise vintage typewriting machine.”

Super creative Olya  (the blogger  behind the à¼ber-cool boho  TLV Birdie  blog) handcrafted so many beautiful elements for her  wedding, and believe it or not, organised the whole thing  in just  3 months! This girl knows a thing or two about originality and artistry so look no further for your D.I.Y. inspiration! Take note of her wise advice the end too.  I  found myself nodding along in agreement like one of those dogs you find on the back shelf of a car. But I digress… read on for a beautiful story, and some sensational  imagery by  Irina Yakobson.

PLANNING OUR ENTIRE WEDDING IN JUST 3 MONTHS
Olya, the Bride: When it came to planning the wedding,  we had a vision of a simple, cosy, small  bohemian wedding. We organised the entire do in  just 3 months, and the wedding day fell upon the beautiful date of 4/4/14.