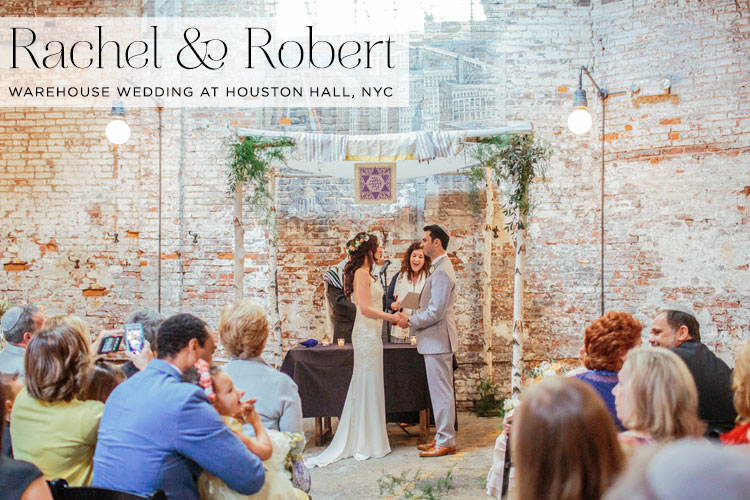 Apologies for the late posting of this morning’s real Jewish wedding – I’m still recovering from last night’s dazzling Brides Magazine Bloggers Dinner. And when I say recovering, it may just have something to do with the fact that Brides had the genius idea of serving a series of cocktails to accompany every course! The whole do was utterly magical from beginning to end — great company, great food, and an exquisite atmosphere in the private dining room at central London’s Haymarket Hotel.

I snapchatted and Instagram-storied live from the dinner so hurry on over and take a look if you want to see what the wedding bloggerati got up to as all the stories will be wiped after 24 hours!

So on to today’s very special real Jewish wedding… Well, where do I even start? Rachel & Robert somehow managed to incorporate a whole host of personal ideas into their Big Day whilst keeping it chic, stylish and super pretty.

There are so many gorgeous touches that I don’t know what to pick out first; there’s Rachel’s special maid of honour — her 91-year old Grandma Betty, the coolest polaroid picture escort cards (you’ll all be wanting to steal that idea!), oh so pretty floral crowns, Louboutins, personalised Converse, a beautifully flowy Nicole Miller beaded wedding dress (this bride has serious style), and a naked red velvet cake.

And instead of just eating leftover wedding cake on their year anniversary; Rachel and Robert have been eating a piece every month, thereby celebrating their anniversary every four weeks… DEFINITELY my kind of couple

Enjoy this one peeps — the day was captured perfectly by The Markows Photography with a glorious film at the end by NST Pictures.

Rachel, the Bride: We met on Match.com. What makes it a good story is that Rob emailed me on Match in September 2012 and I waited two months to write him back! I received his email and I was interested but just not ready to meet someone at the time. It was a good thing he was still single and interested in meeting me two months later…