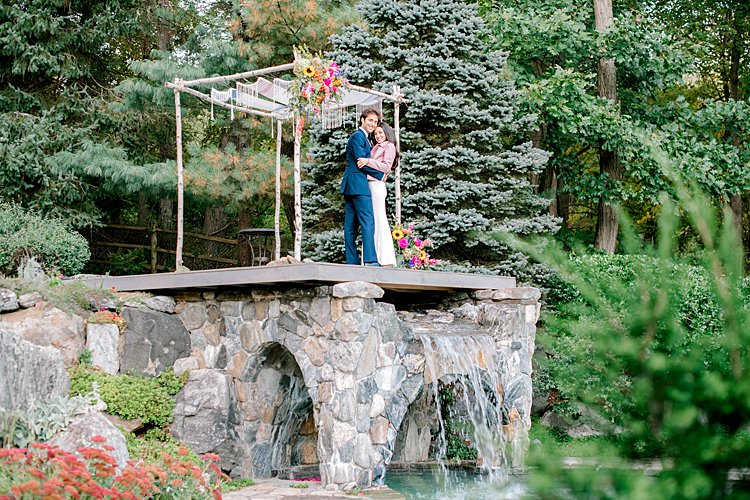 Okay, HOW amazing is Samantha and Brandon’s uber-dramatic chuppah for their Jewish wedding?! These two built a raised platform above a hot tub in the groom’s parents’ backyard, where they wed, to form a dramatic perch from which they got to look out at all their guests while making it official. Samantha says they went “a little over the top,” but we think they got it just right. Don’t miss it in Mindy Briar’s epic shots!

The custom chuppah platform is also the kind of thing that would probably be hard to pull off in a traditional venue. The couple, who had originally planned a big black-tie wedding, pivoted to something much more intimate so that they could marry on their original date ofOctober 3, 2020, and we love that they took advantage of all the options afforded them by their Plan B. Gathering with just local family, and including loved ones from outside the New York area via Zoom, Samantha and Brandon shifted gears to pull off the magic secret garden-themed wedding of their dreams – and it was all inspired by their amazing custom ketubah!

These two had a clear vision of what they wanted, and they worked with beloved Smashing The Glass Recommended Vendor Tallulah Ketubahs to bring their dream ketubah to fruition – and then some! Founder Rachel was ultra-attentive to the couple’s wishes, and, in addition to the gorgeous, colorful hand-painted florals framing the text, she incorporated ultra-personal touches, like the pair’s cats, and passports to represent their love of travel. The level of detail is just phenomenal – we bet you’ll be just as blown away as we are!

Now over to Samantha, who’ll fill you in on all the other special details of the day… 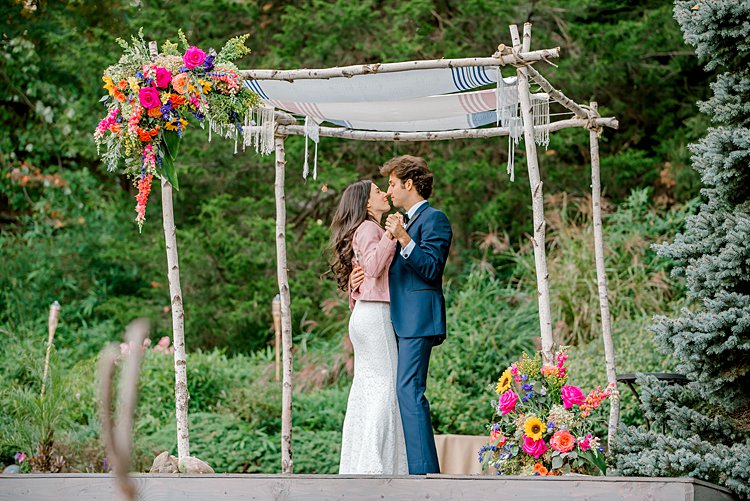 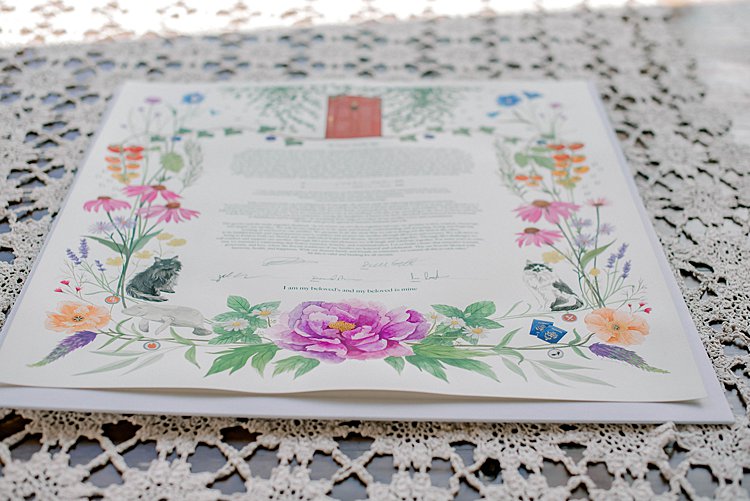 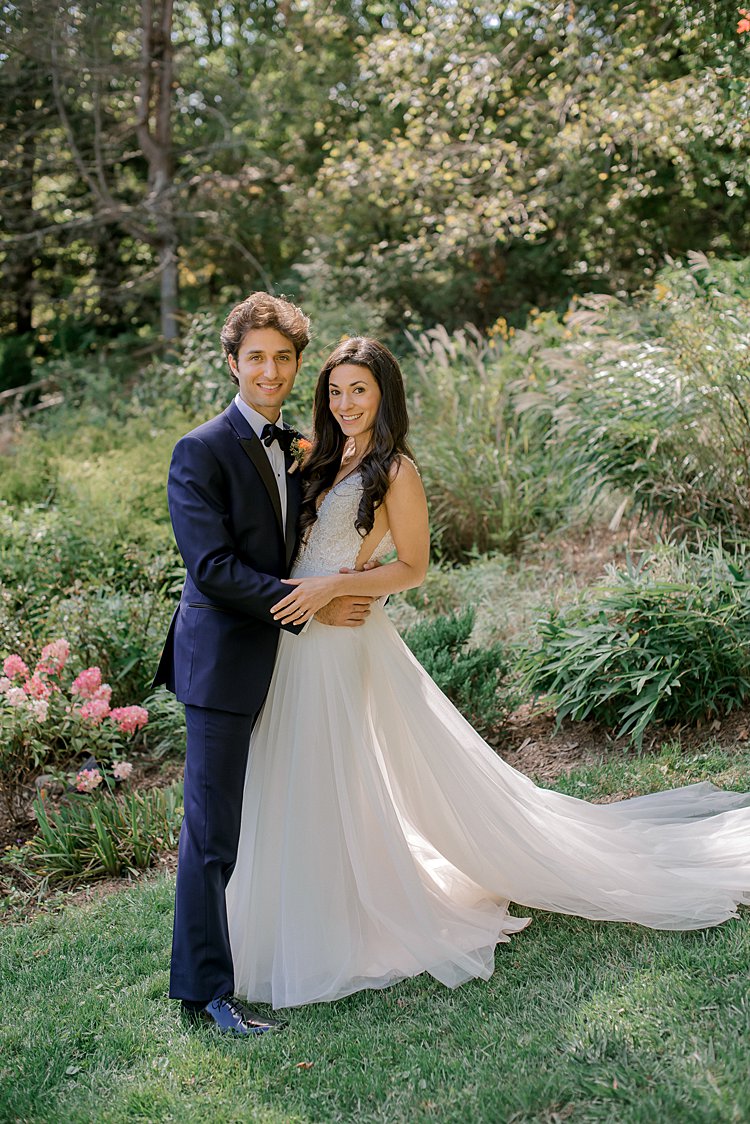 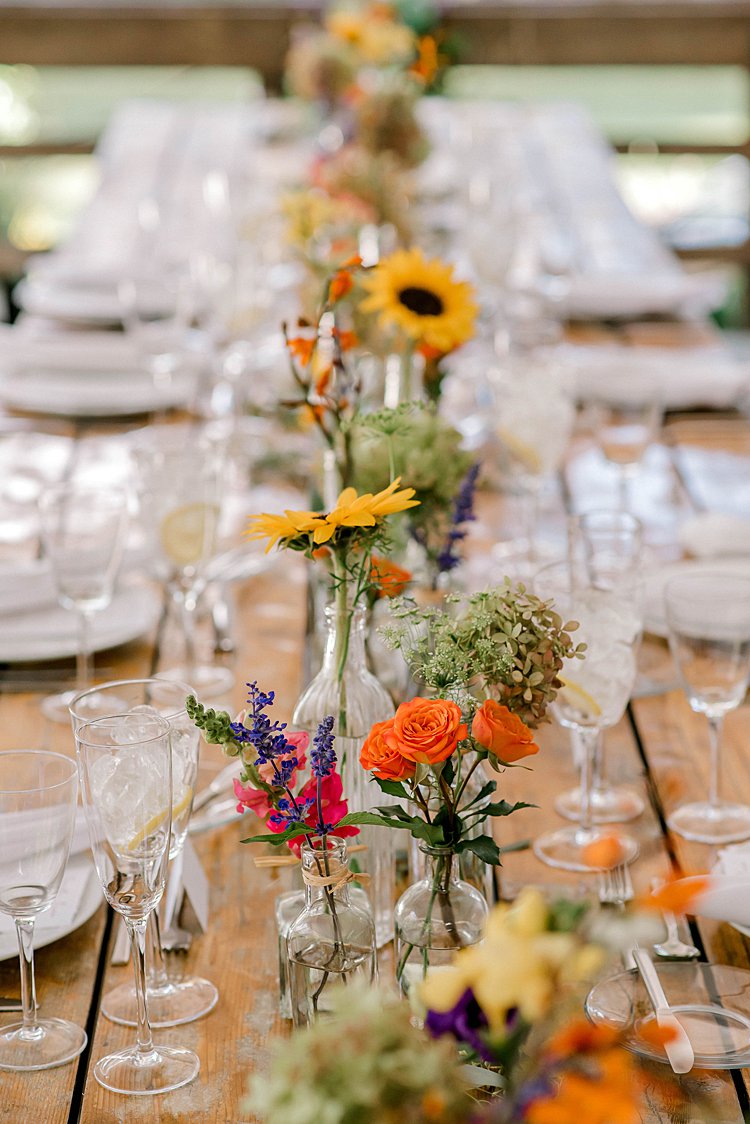 Samantha, the bride: Brandon and I grew up about five minutes down the street from each other and attended the same middle school and high school, but had never crossed paths. I knew who he was because he was the cute, albeit slightly obnoxious, boy in my freshman math class. When he showed up on my Tinder 15 years later I couldn’t resist swiping right. Once we started talking we just never stopped!

Brandon is a Finance and Business Operations Manager for WeWork and I am the President and Creative Director at Auburn Jewelry, a custom jewelry company based in New York. We spend our free time together cooking, baking, dancing, gardening, hanging out with our two rescue kitties and enjoying each other’s company. END_OF_DOCUMENT_TOKEN_TO_BE_REPLACED