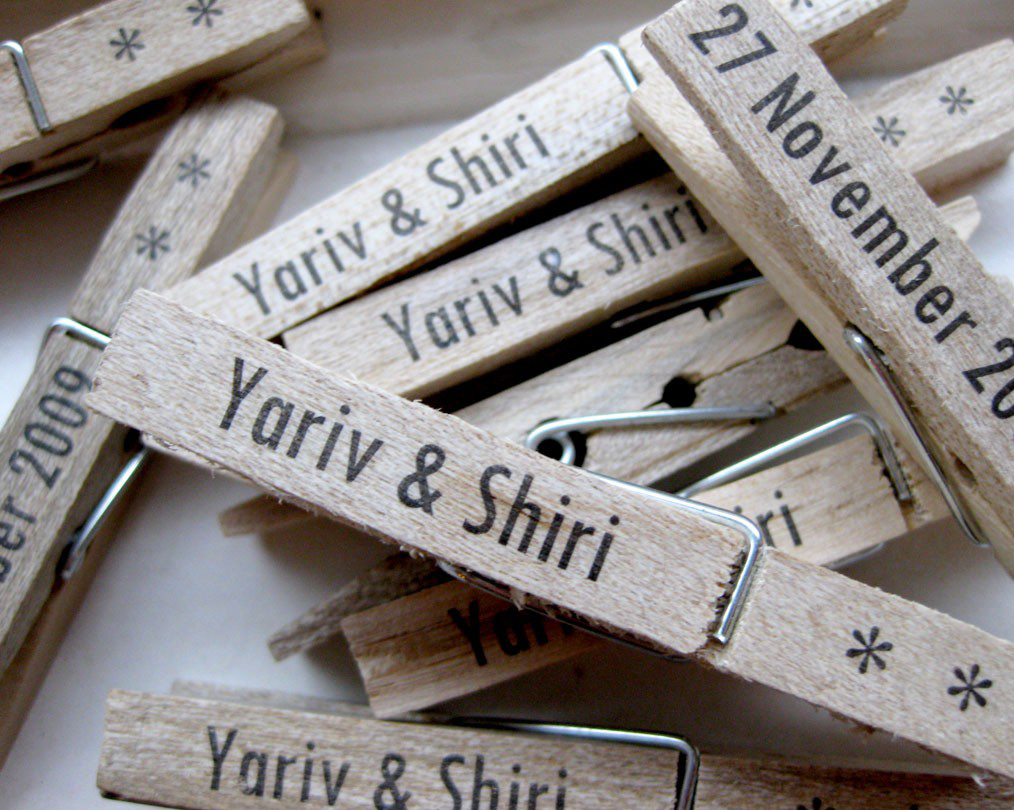 This has to be one of the most original and ‘true-to-themselves’ weddings I’ve ever had the pleasure of writing about. It’s a very small affair with the bride and groom, Shiri and Yariv, inviting just 20 of their closest family members out for brunch and then surprising them with a chuppah! And if that wasn’t exciting enough, the ceremony took place on a bustling New York street corner! How incredibly atmospheric must that have been? The chuppah itself is very special but more about that later.

Shiri and Yariv met in New York City several years ago. When they met, Shiri was living in London but spending most of her time in the US on business. She was single and didn’t have much of a social life so used JDate as a platform to meet interesting people. That’s how they met. He took her out for dinner at one of his favorite haunts, a restaurant called Taboon, and the rest is history. 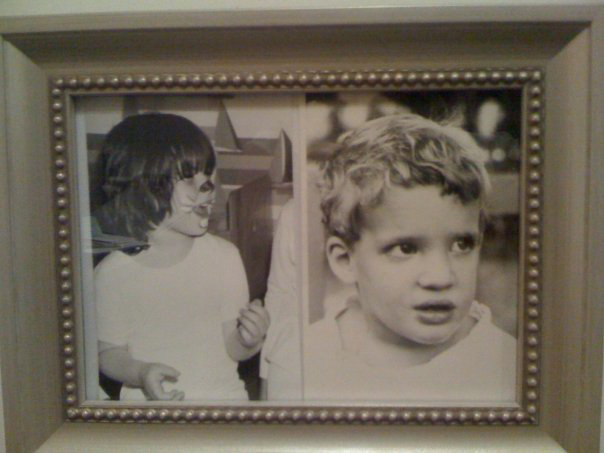 VENUE & THE IDEA FOR A ‘SURPRISE WEDDING’!
Shiri the bride: Our ‘surprise’ wedding took place at Taboon, the restaurant Yariv took me to on our first date. It’s a beautiful yet unassuming Mediterranean restaurant in a neighbourhood of NYC called Hell’s Kitchen. Their menu is full of delicious twists on Israeli dishes and carefully chosen Mediterranean wines. I don’t have to tell you the magical memories the site of a couple’s first date has — I remember that night as if it was yesterday.

Yariv and I return once a year on the date of the night we first met, and that year, halfway through my Haloumi salad (and a few glasses of Chenin Blanc), the idea of having an intimate surprise wedding at Taboon took over my imagination. We had been together for 3 years and really wanted to start a family, but not before sealing the deal under a chuppah. Our families were going to be in town that following Thanksgiving, a few months away… the idea took on a mind of its own!

Thankfully Yariv liked the idea as much as I did. He’s a very modest, low-key guy and the thought of not having a big hoopla wedding sat very well with him. We booked Taboon and very slowly started calling our close family members inviting them for “brunch”.

REVEALING THE SECRET
Uncovering the purpose of our get-together was one of the most exciting moments of our lives. We’d been keeping a secret for what felt like an eternity and our guests had absolutely no idea. Some thought we might announce our engagement at the “brunch” (that’s right, we weren’t even officially engaged) but nothing more.

Once the appetisers were cleared, Yariv & I stood up to toast the occasion. When Yariv announced that we would like to invite everyone to be part of our chuppah just before dessert, the energy of the room became electric. Everyone cheered, our mothers had tears in their eyes and the guests’ excitement was something indescribable. 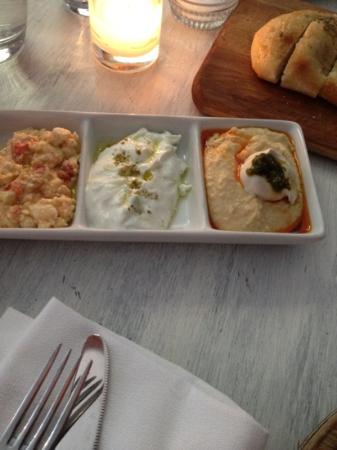 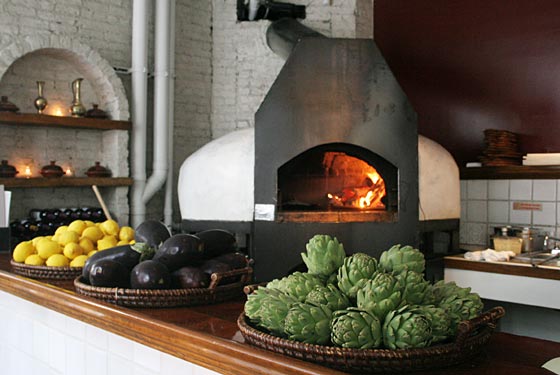 CEREMONY
The Rabbi who wed us is a superstar. He’s a young Chabad Rabbi of a small (yet growing!) congregation in our neighbourhood. When we came to him asking whether he would marry us in a non-kosher restaurant he looked perplexed. We assured him no meat would be served, he took a minute to think about it and said “how about the nearest street corner?” A surprise wedding on a bustling New York street corner? We loved it! 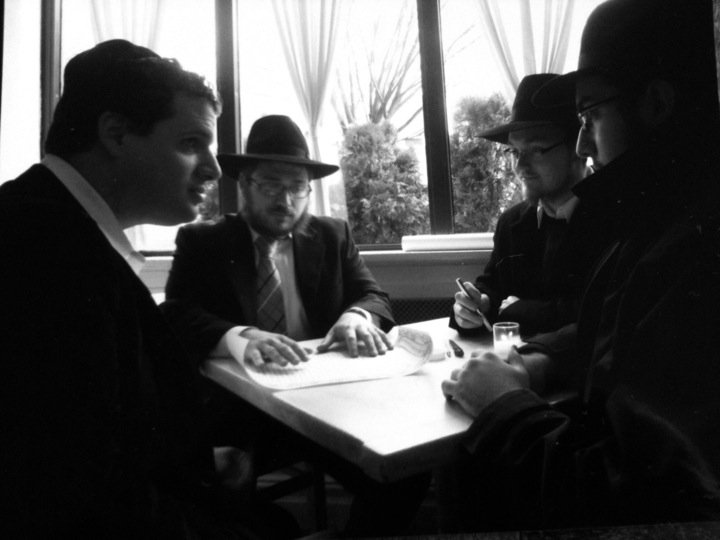 And so did our guests. They stepped outside on a windy but dry day, the men wearing napkins on their heads because someone forgot to buy kippot (!). Four of our male guests held the chuppah poles, the backdrop was the usual hustle & bustle of the city, taxis and buses honking as they whizzed by, a FedEx guy even stopped to watch the show… you get the picture. I will always remember every detail. 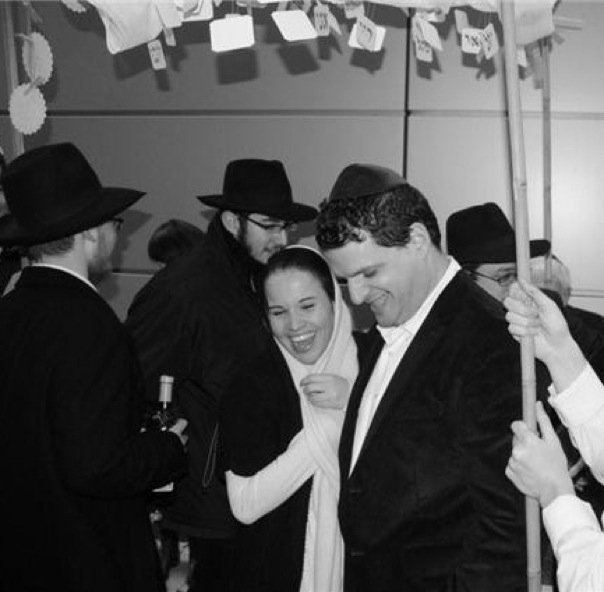 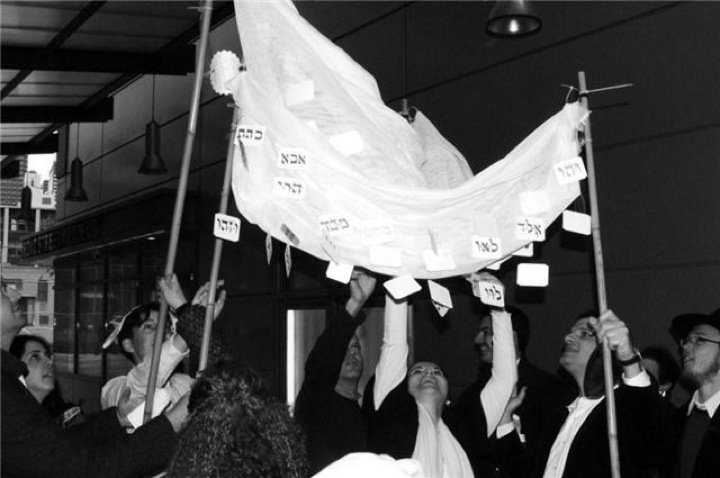 A UNIQUE & CREATIVE CHUPPAH DESIGN
The chuppah was going to be the most important part of our wedding. It was just a brunch with less than 20 of our closest family members so no band, photographers, fire eaters…

I had been taught that a chuppah is considered a sacred space, and it is thought that God himself dwells wherever there is one. I had also read that it is the only opportunity in a woman’s life to be directly connected to God. I was going to make the most of it! 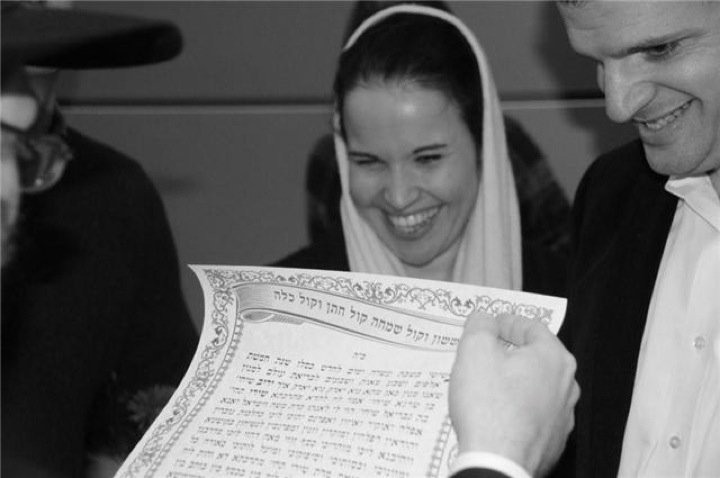 I really wanted to put all the energy of the moment under the chuppah, and because we really wanted to start a family, I wanted it to be big enough to cover the children that were there. I bought the white tulle and 4 large bamboo sticks and hand wrote all of the 72 Names of God and carefully pinned them to the tulle.

We also asked our guests to write wish cards (wishes for us, themselves and their loved ones) and the kids to make drawings that we then hung under the chuppah just before the ceremony started. The kids had lots of fun helping me out.

The ceremony was even more divine than I dreamt it would be. 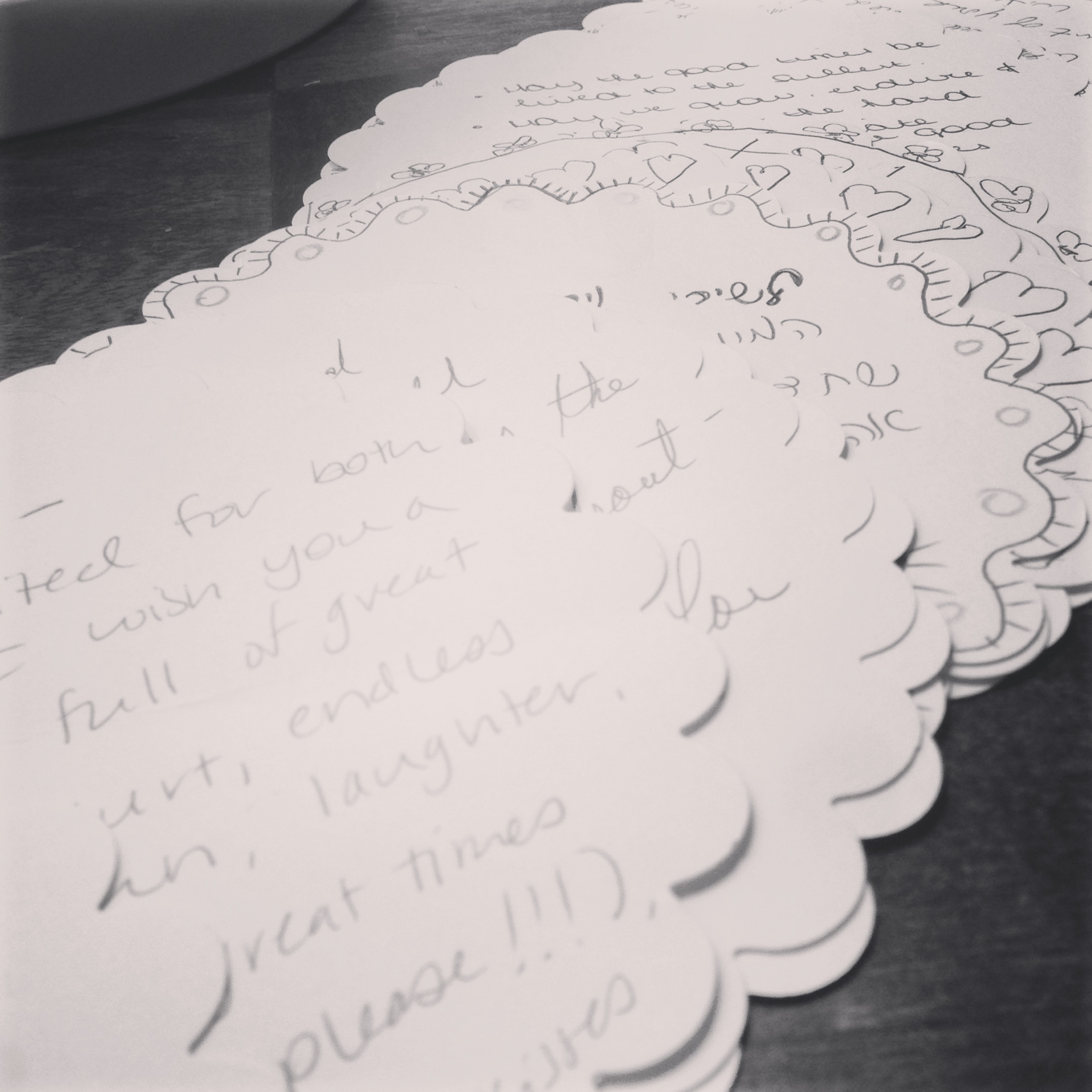 CUSTOMISED CLOTHES PEGS
We had one thing especially made for the day — customised clothes pegs. I know it sounds funny but something had to hold up all the wish cards and drawings under the chuppah! I ordered them from Etsy which is the most incredible place to source items and ideas for weddings and other occasions. Creative minds across the globe make the most breathtaking things which they then sell on Etsy – I love it. Our guests loved the pegs so much they took them home as momentoes.

FLOWERS FROM  NEW YORK’S PLANT DISTRICT
The celebration was far too understated to have a theme or colour scheme. Taboon has a beautiful rustic white interior, with a wood burning oven and big overflowing bowls of lemons, artichokes etc. All the space needed were some simple flowers for the tables. So the morning of our “brunch”, on our way to Taboon, we popped round the Plant District, a block in the heart of the city with only flower and plant merchants. It’s one of my favourite places in the city because the grit of the city is contrasted by such a vast amount of plants, flowers and greenery taking over the sidewalks. Walking into some of the merchants feels like entering the Amazon

— it’s really crazy. Anyway, we got a huge bunch of white hydrangeas that we then put in small vases once we arrived at Taboon. I’m probably one of very few Jewish brides that showed up to her wedding with pruning shears! 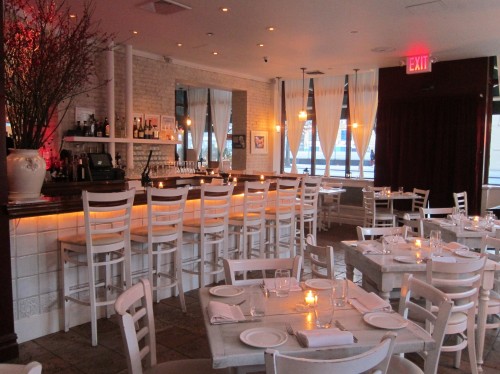 DRESS
I figured I would give myself away if the guests walked in to me wearing Vera Wang. We wanted everything to stay simple and really represent who we are. I bought a white silk bubble skirt with black polka dots, and a simple white top from Club Monaco, and wore my grandmother’s pearl bracelet. I did my own make up and hair, and can’t even remember what shoes I wore!

ADVICE TO OTHER BRIDES
Drama is inevitable in the lead up to the big day. Everyone is going to have an opinion about what you should wear, serve, play, who you should invite and of course reminding you that uncle Irving shouldn’t sit anywhere near cousin Ira. We avoided all the drama by making it a surprise but inevitably disappointed some of our closest friends who were in our hearts but not physically there. So we also had our share of drama.

The real downside is that the spiritual significance of a Jewish wedding is often lost in all the madness of putting it together. If there is one piece of advice I would give a bride it would be to try to experience the pure and sacred side of a Jewish wedding as much as possible.
Going to the mikvah, the time under the chuppah and in the yichud room are all such rich once-in-a-lifetime experiences and perfect opportunities to really exhale. 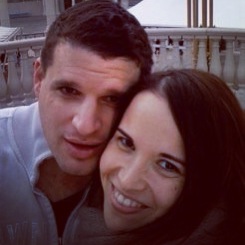 Wow, a surprise Jewish wedding – how about that – have you ever heard of anything like it? The energy must have been electric! What an awesome and inspiring couple Shiri and Yariv are. They have the courage to do things differently and it shows such confidence in themselves and their beliefs in what they wanted their wedding represent.