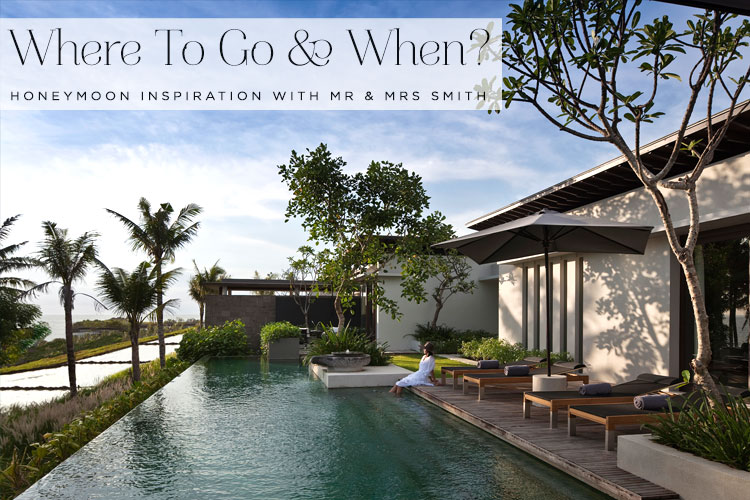 One of the fabulous perks of being a wedding blogger is being invited to press days and WOW, what a fun time we had when we were invited to brunch with Mr & Mrs Smith at the super cool Bourne & Hollingsworth Buildings, a couple of weeks ago on a sunny August morning.

In an enchanting, sun drenched, flower filled, Islington hot spot, along with a handful of other bloggers and press, we were introduced to Mr & Mrs Smith’s fabulous new cosmic-themed honeymoon hub.

The introductions were made by none other than Mr & Mrs Smith’s founder and current CTO — Tamara Heber-Percy. Admittedly we were a little star struck (if you missed the post outlining my obsession with Mr & Mrs Smith, then please allow me to fill you in right here). And as for the location, there’s no real surprise that they chose a stand-out spot for brunch… because that’s what they do.

To give you more of an idea what, and how they do it, Mr & Mrs Smith have rounded up into their stable, 1000 of arguably the most stylish hotels in the world, and as an extension of this, their honeymoon hub is essentially, a call-off-the-search, look-no-further, honeymoon finding and booking service. That’s whether you’re looking for a mini moon, midi moon, full moon or maxi moon. Indeed the terminology has moved on. 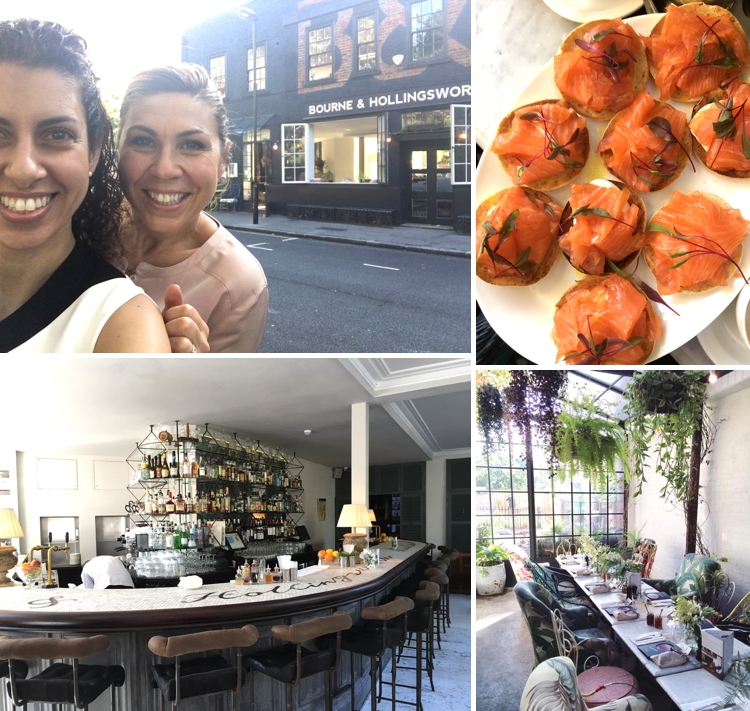 We all just need a holiday

Gathered around an enormous farmhouse table laden with fruit salad, yoghurt, granola, smoked salmon bagels and toasted sourdough, Tamara — who, by the way is as smart, stylish, warm and inspirational as we’d heard – ran us through the results of their honeymoon inspired survey. Take a look at the graphic at the foot of the post for a roundup.

Aside from the hysterical number of people who’d been caught in a compromising position on honeymoon, there were some interesting findings in how people would choose to honeymoon again given the chance.

Given the choice between an all-expenses-paid trip to the Maldives or the moon, most people chose, perhaps unsurprisingly, sunbathing on the magical beaches in the Maldives. But let’s face it when it comes to a honeymoon, no matter how adventurous and intrepid we think we are, we all just need a holiday. Especially after organising your dream Jewish wedding and using your very last drop of energy and patience achieving just that.

And isn’t it interesting that only a third of couples opted for the combo-moon, pairing a city/culture stay with a beach break? Most opted solely for the beach retreat. The flying and flopping honeymoon isn’t dead after all. 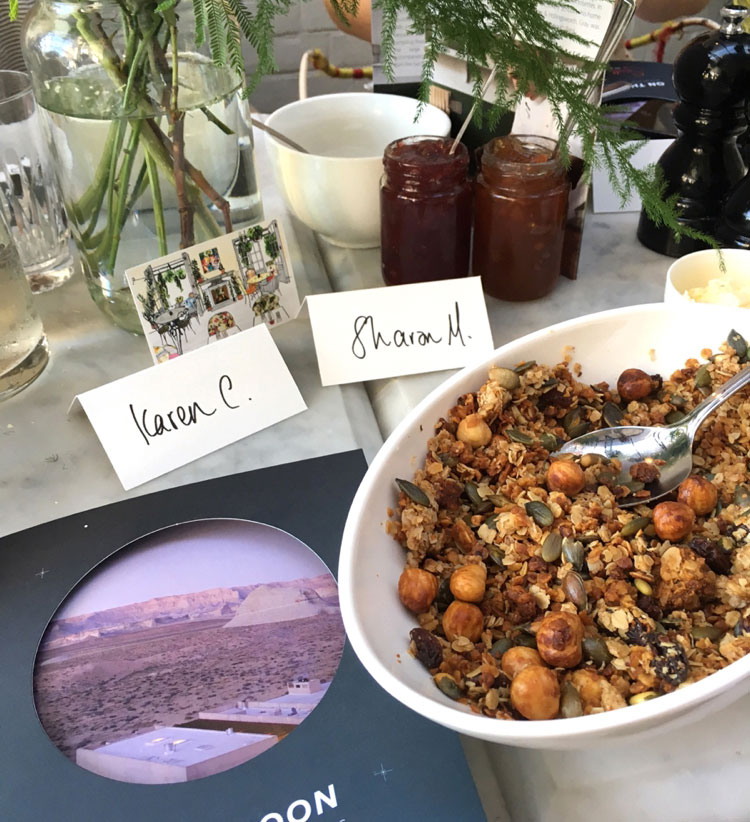 So where is everyone going? Mr & Mrs Smith have identified five trending long-haul destinations. Given the choice to honeymoon again this year, half of the already married couples would head to Sri Lanka. There has been a burgeoning boutique hotel movement there for a while now and has become a firm holiday favourite for the big one. If that appeals you really must check out Mr & Mrs Smith’s Sri Lankan gems.

Japan is another favourite. It’s a bit different in terms of honeymoon destination, but it really has everything from skiing to crazy city culture. Considering it’s just got the Olympics, I can see this destination wedding going through the roof in the next four years. 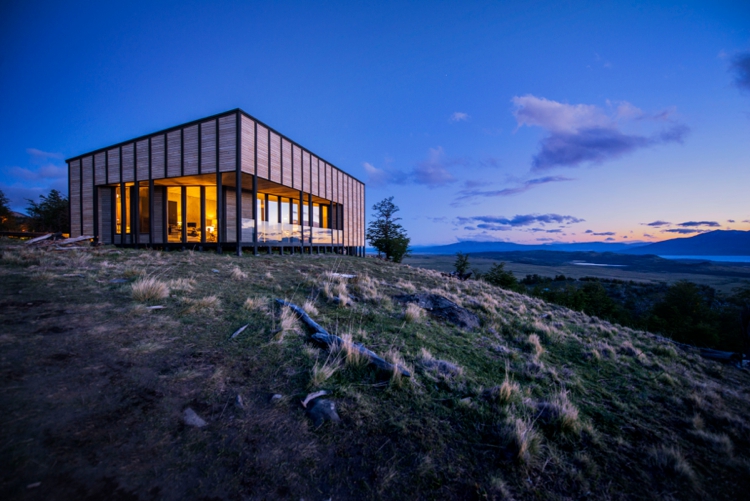 Where to go when…

That’s all well and good but what’s the best time to go to any of these places?

When’s the sweet spot between the rains and the searing heat, a time when hurricanes hardly ever happen? How many times have you goggled “best time to go to x”? You’re not alone.

Mr & Mrs Smith, always with an eye on service and those added extras, have created a simple but effective month-by-month breakdown of the globe’s best getaways. 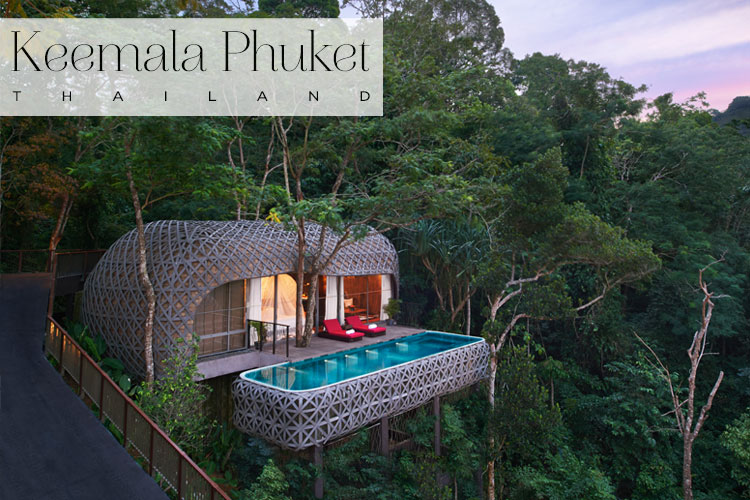 Nestled in glorious greenery — a short drive from Patong beach , Keemala Phuket‘s holistic philosophy proposes healing spa rituals, healthful homegrown cuisine and an eco-friendly ethos. And did I mention that the swimming pools are on stilts? 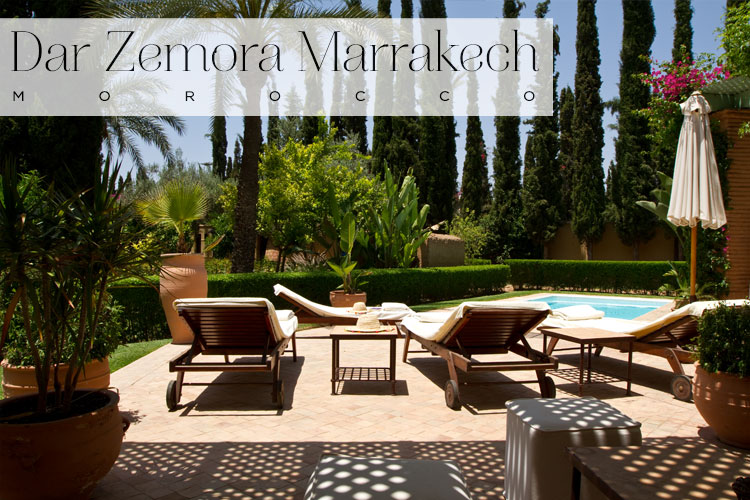 February in Marrakech = Beat the New Year blues with a dose of Moroccan sun. Spring and Autumn are warm but Summer is truly sweltering. 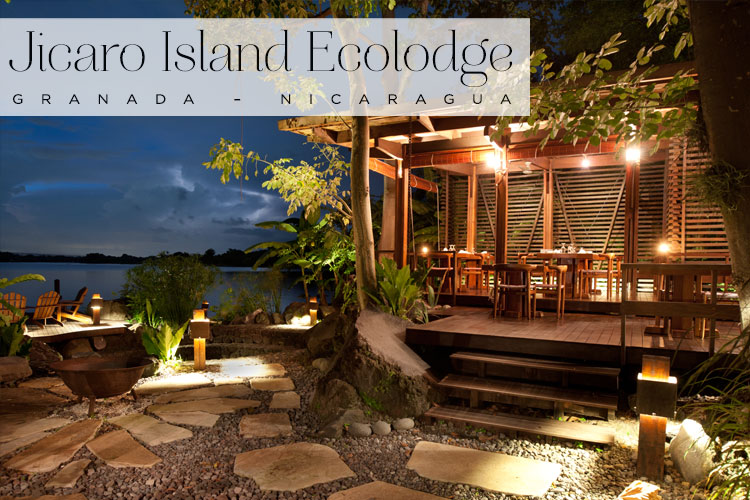 Hidden amid lush coconut palms and mango trees on one of the tinier Isletas de Granada, Jicaro Island Ecolodge Granada is a leafy patch of paradise floating on Lake Nicaragua. Arrive by boat for a truly Bond style entrance and dine on the jetty overlooking mean, green Mombacho Volcano.

March in Granada = Leave your brollies at home — rainy season starts in May. Nicaragua doesn’t really do cold. 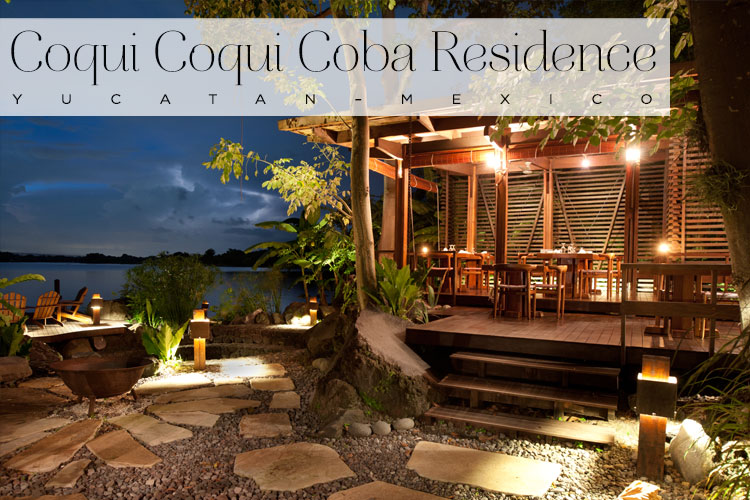 Unleash your inner Indiana Jones at Coqui Coqui Coba Residence: this two-tower hideaway sits in an ancient ruined city with jungle, lagoons and caves as its playground. That and an orange-and-vanilla-scented spa – heaven.

April in Yucatan = Catch the tail end of high season when the sun- worshipping throngs disperse. February is Carnival time in nearby Cozumel. 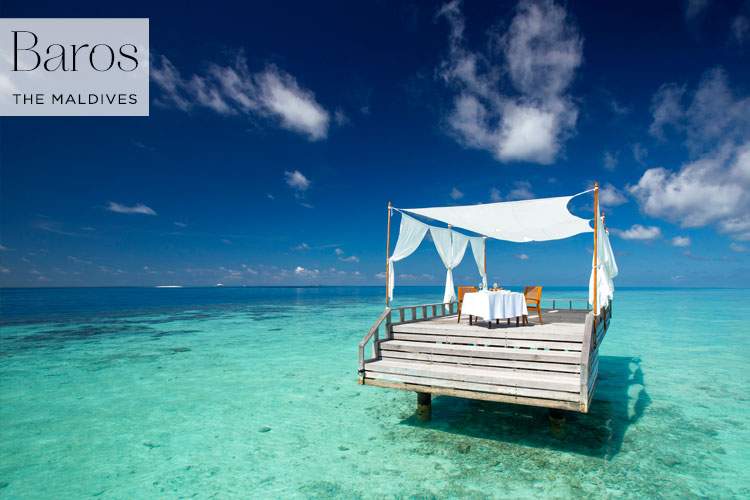 This really is lagoon luxe. Perched around an idyllic secluded island in a crystal-clear coral lagoon, Baros boutique hotel will exceed your highest fantasy-island expectations.

Add to the mix serene contemporary rooms (including overwater villas), fine-dining, blissful spa treatments, a ridiculously beautiful pool and activities from yachting to yoga, and you really have the ultimate escape.

May in The Maldives = The Easter rush eases off by May. Unsurprisingly there’s never a bad time to honeymoon in paradise. 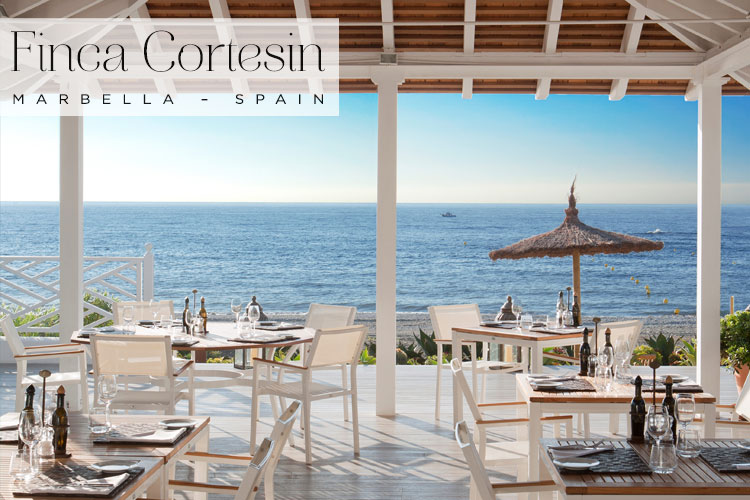 Designed with a nod to the Iberian peninsula’s history, Finca Cortesin incorporates both Moorish and Castilian elements, and effortlessly manages that hard-to-pull-off trick of being glamorous and comfortable at the same time. Oh and it also boasts one of Spain’s best golf courses!

June in Marbella = With 320 days of sun, there’s not much in the way of bad weather, June though, guarantees a summer scorcher with fewer crowds. 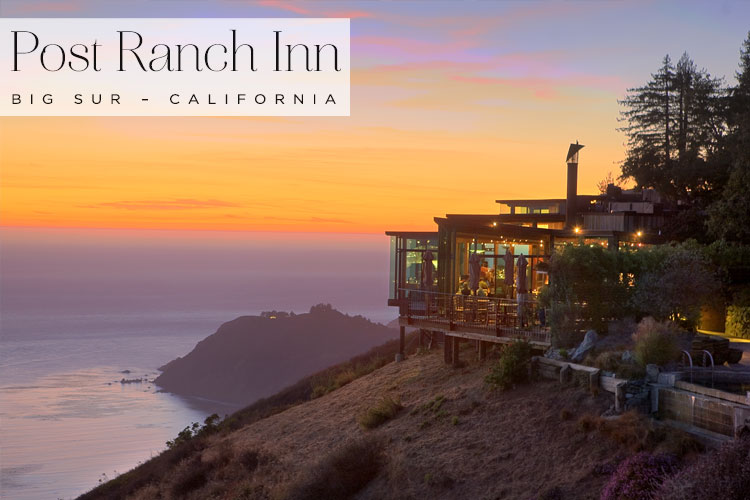 Total seclusion and nothing but soaring condors, starry nights, breathtaking views from your cabin and a wood-burning fire for company. The only reason to venture out from your peaks-and-Pacific isolation at Post Ranch Inn will be for some surf-and-turf at Sierra Mar or a soothing treatment in the spa

July in Big Sur = Summers are lovely — a bit foggy in the morning, clearing by the afternoon. Spring and Autumn hardly disappoint, mind. 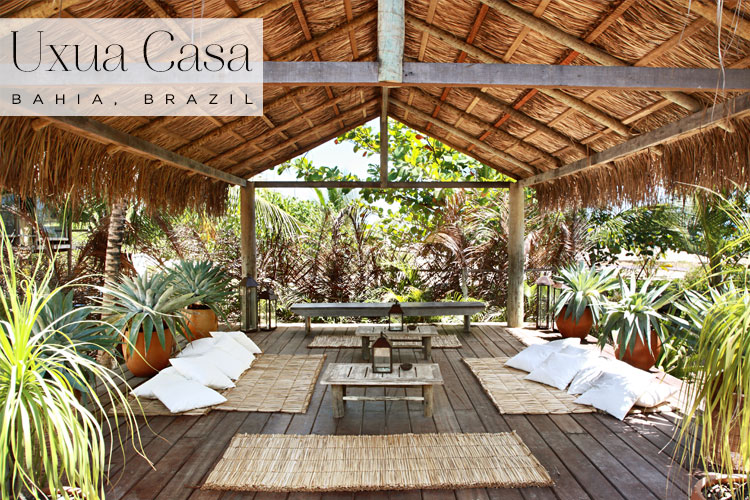 Uxua Casa is the stay of choice in this beautiful seaside village. The Brazilian elite, not to mention style-savvy visitors from the US and Europe, flock to its 10 private casas all year round, drawn by its stunning beachside location, dedication to sustainable tourism and the sort of interiors that wouldn’t look out of place in Wallpaper* or Elle Decoration.

August in Bahia = The winter is sunny and sedate and you wouldn’t have to jostle for beach space. For Carnival fun, visit December to February. 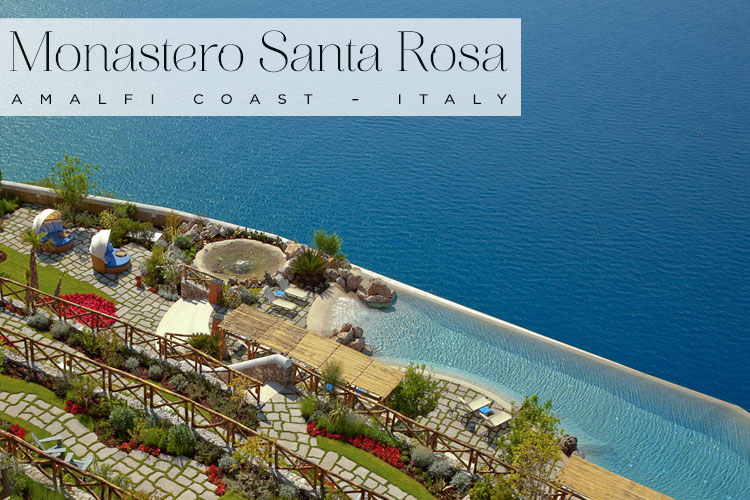 The painstaking renovation of Monastero Santa Rosa, a 17th-century monastery, has resulted in a unique Cliffside Amalfi boutique hotel between Positano and Amalfi. Steeped in history, lavished with top-quality furnishings, and set in gloriously scented tiered gardens, the 20 ocean-view rooms and Santa Maria Novella-stocked spa are remarkably spacious and utterly romantic.

September in Amalfi = skip the July and August hordes by heading here in September when cooler days mean more exploring, and less queuing. 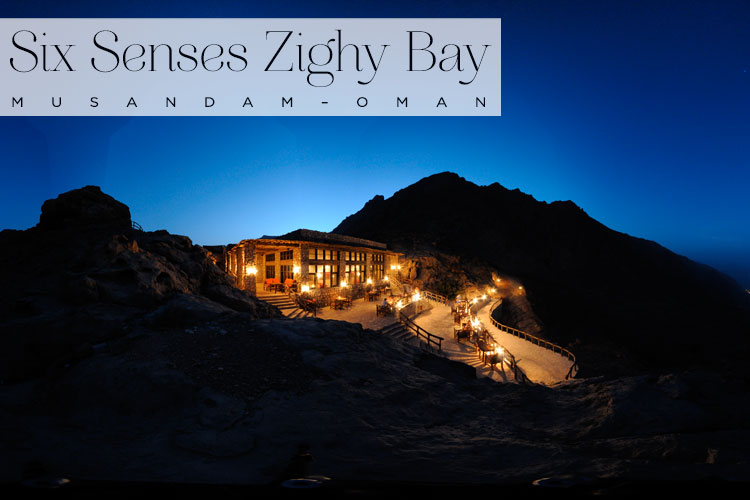 The award-winning Six Senses Zighy Bay beach resort in Oman is not just remote, it’s like nowhere you’ve seen before: cradled by craggy mountains and dipping its toes into the opal blue waters of the Musandam’s fjords. Adventure seekers this is one for you. Where else in the world can you choose to arrive by speedboat, 4×4 or paraglider?

October in Oman = To make the most of the adventures on offer, you’ll want to avoid the height of summer — October to April is the perfect window. 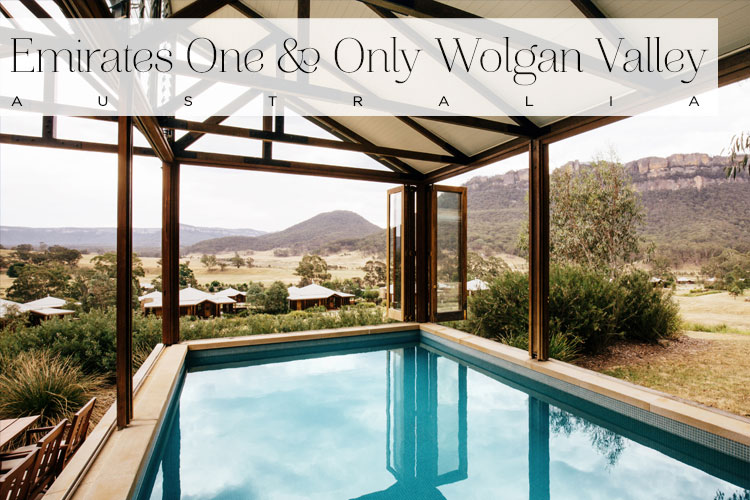 Outback ultra luxe. With access to over 7,000 acres of pristine Blue Mountains wilderness, Emirates One & Only Wolgan Valley, Australia is a world-class spa. Private villas where in-room swimming pools come as standard, this will be one special honeymoon.

November in The Blue Mountains = the cooling climate of the mountains makes for a refreshing mid- summer retreat. Here, Yulefest is literally Christmas in July. 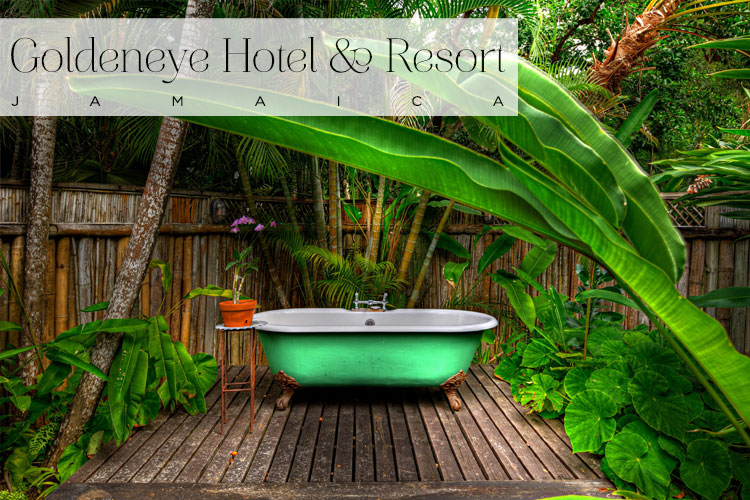 The name is no coincidence; Ian Fleming penned all 14 of his James Bond novels in his villa at Goldeneye Hotel & Resort Jamaica, now the hotel’s centerpiece. How super cool is that?

This idyllic cluster of whitewashed cottages and suites on Jamaica’s Oracabessa Bay is massively inspirational. Swim-up hillside spa, watersports area or treetop restaurant, as well as oh my, that setting!

December in Jamaica = Bypass the end of the hurricane season (November) and enjoy calmer skies. Rainy season (May and October)

I hope there is enough inspiration featured here to get you booking the most romantic break of your life. Breathe deeply and remember — we all just need a holiday… and you deserve it.

Visit Mr & Mrs Smith‘s award-winning website and booking service for yourself and find your honeymoon from a pick of the world’s most inspiring boutique hotels.

Book online or through the Smith24 travel team 24/7, for money back on every booking, best available rates and a free Smith extra on arrival. 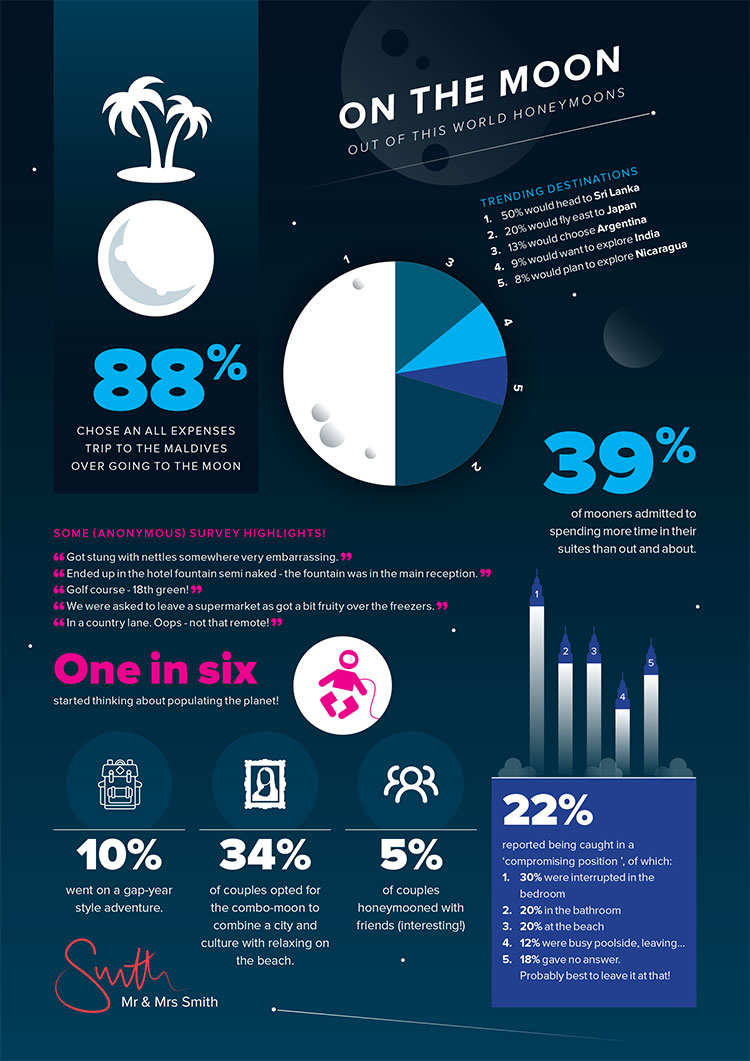 Mr & Mrs Smith is a Smashing The Glass handpicked sponsor and this is a sponsored post.
Thank you for supporting our sponsors! You can find out more about sponsored posts here.