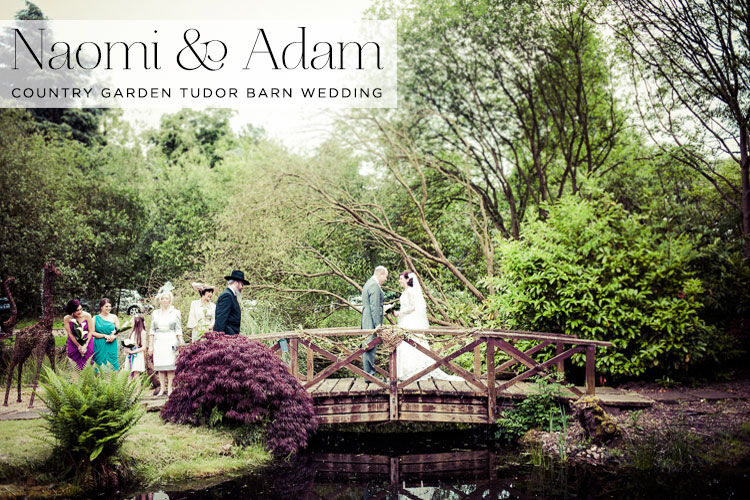 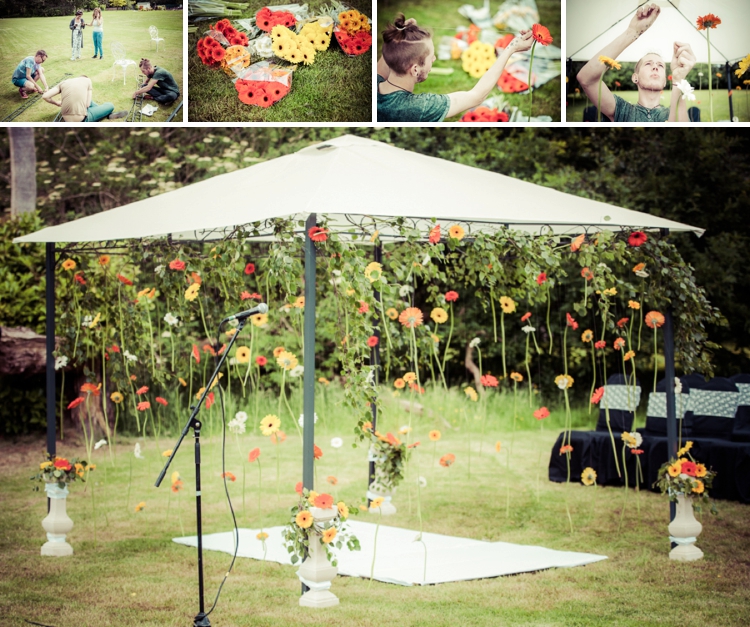 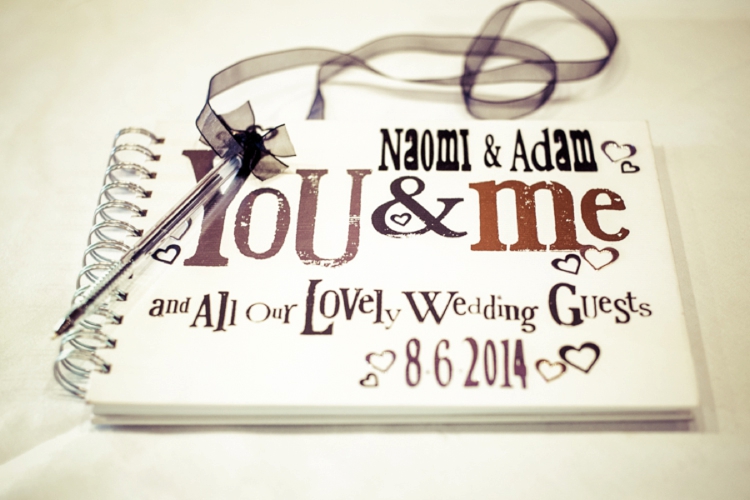 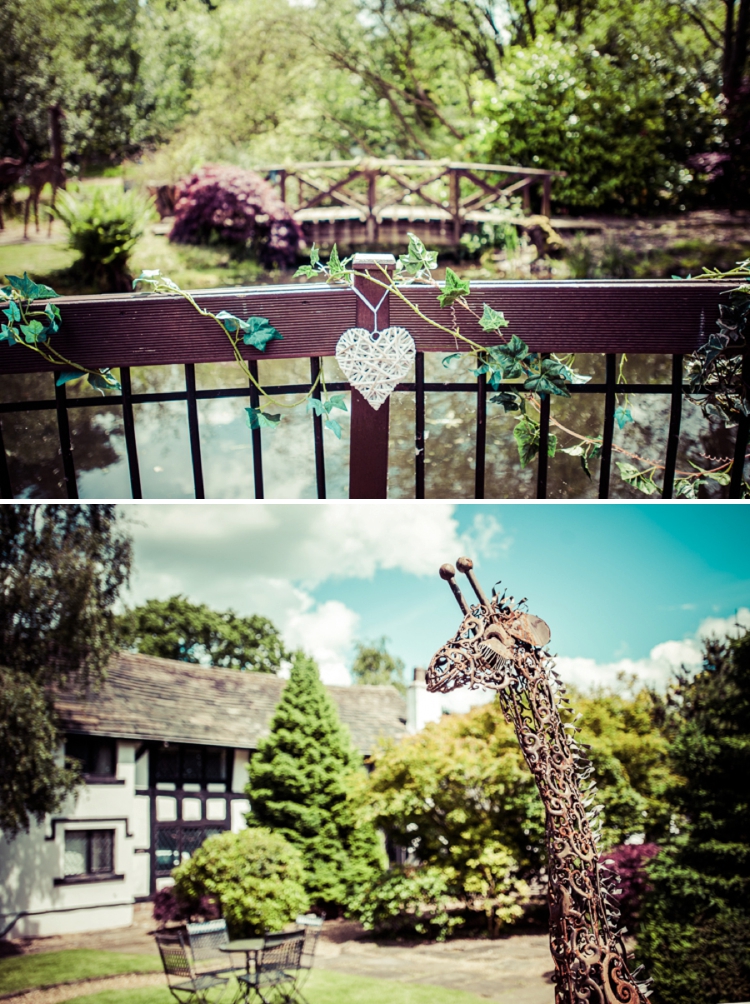 We were both set that we didn’t want a traditional hotel or something of  a similar vein. We wanted a venue  with a bit of character and something slightly different. In the end we went  for  a tudor barn in Cheshire that also allowed outside catering.

We used a  planner on the day called  Lisa Sheldon.  She helped to organise the running of the day, dressing the room, and changing the room around. She sorted any issues that arose and dealt with everything to try and keep me calm on the day! 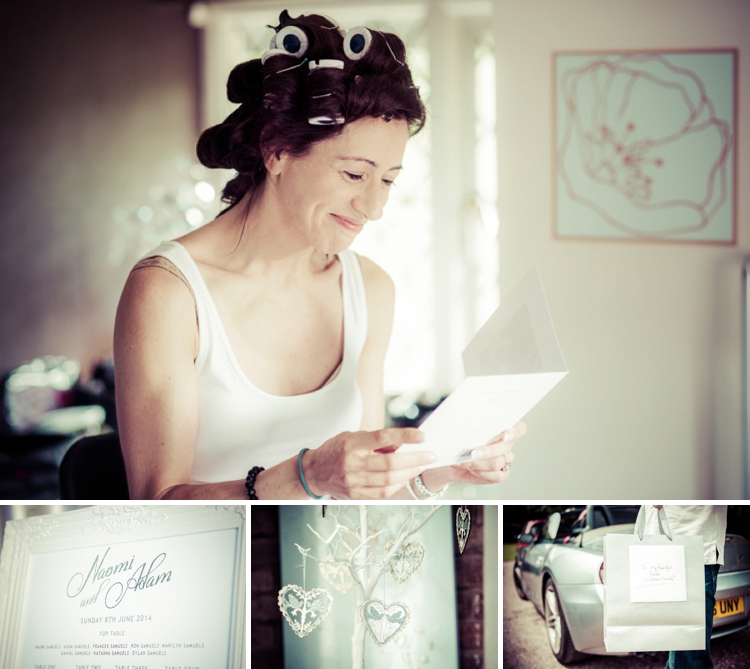 a purple and teal colour scheme

I had three bridesmaids  – one wore a teal dress, one  wore a purple dress, and my 10 year old niece wore a cream dress with a teal and purple sash. 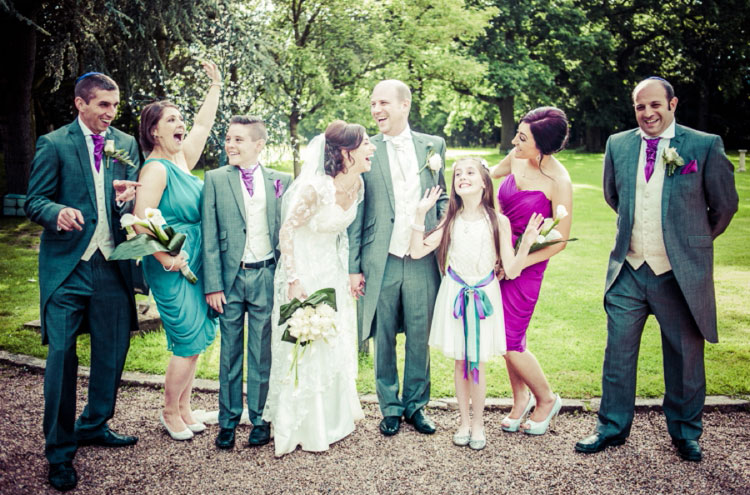 Natalie Silverman at Silvie Designs  spent loads of time with us  and was so patient with our many ideas. We had so many designs and thoughts.. we originally started with bright colours, then peacock colours and ended with a black and white silhouette design on vellum. We then asked Blake Ezra, our photographer, to take a picture of us to try and replicate the image onto a thank you card. 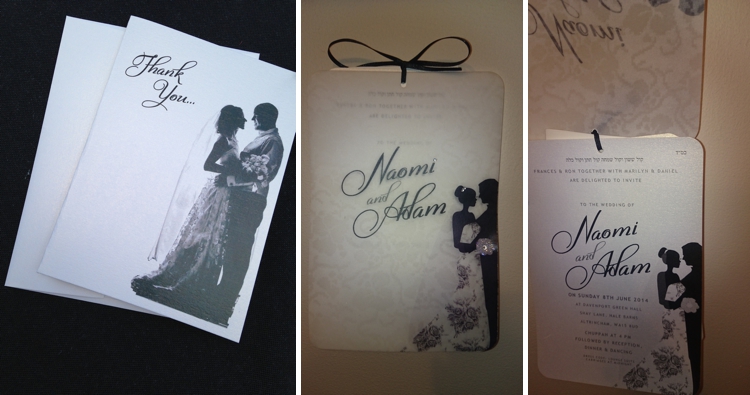 designing my own  dress

I actually designed my own dress! I didn’t plan to, but I  tried a few on and none of them were really me. I  had a few ideas, put together all the best bits of previous dresses and came up with my own design. My  dressmaker was a woman called Erica Stacey  and  I took a bit of a gamble with her.. I found her online and just took a chance!

I went to her with the ideas I had, and she drew exactly what  I wanted. I just totally trusted her and felt very comfortable and we went from there. She was amazing and took so much time and effort to please me, Nothing was too much trouble. We had quite a few fittings and several adjustments were needed. She was so accommodating and lovely — I  would definitely recommend her!

I had a veil and a flower that went in my hair that matched the dress, again all made by  Erica. I knew I didn’t want too much fuss and with the dress having a lot of detail, I didn’t want to detract from it. 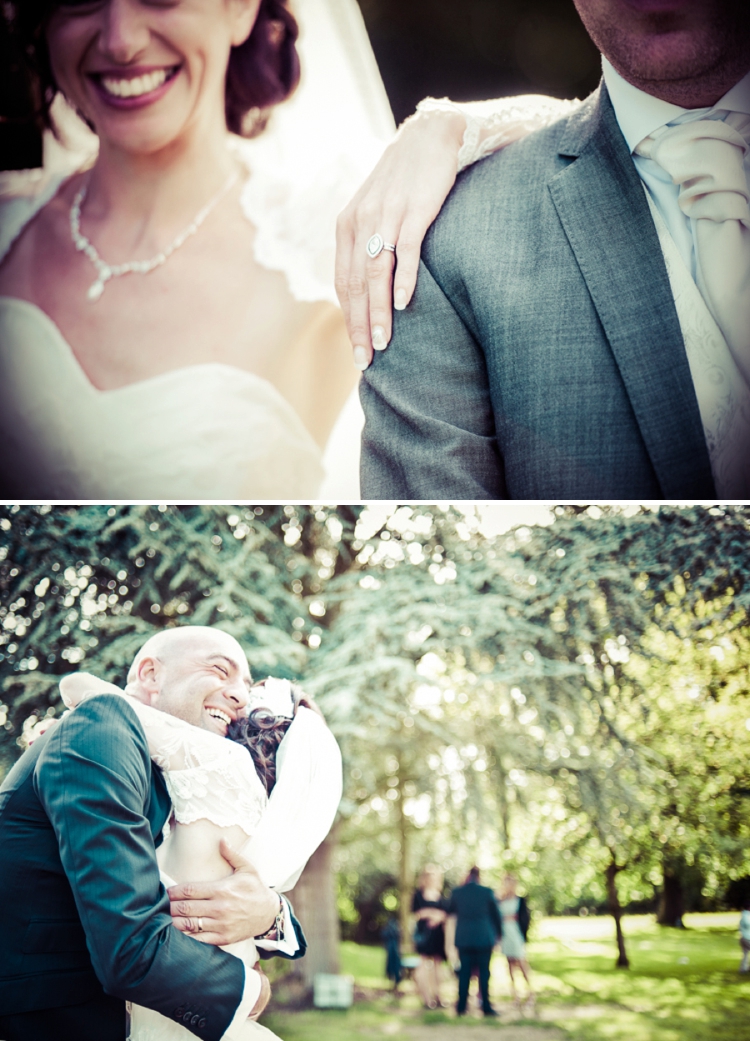 Would you believe it, I  found them on eBay! They matched my dress perfectly. They were ivory with a little lace and a satin strap and were very comfy. I didn’t take them off once! 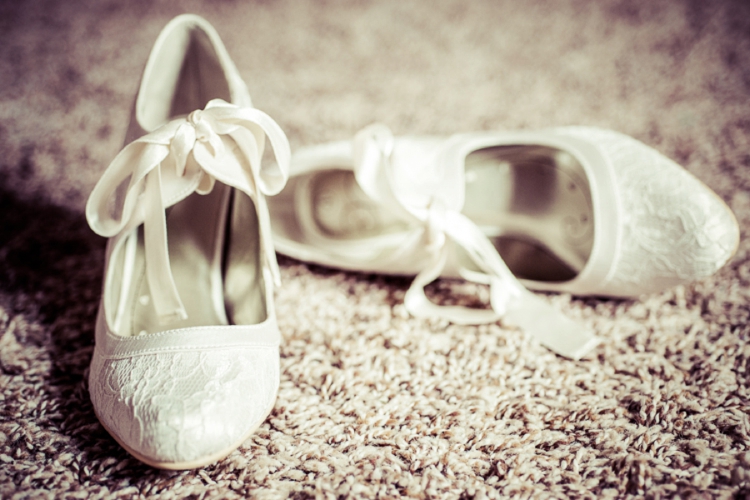 I used Tally Bookbinder  and she’s amazing! I’ve known her for many years — shes a professional make up artist, and when I got engaged, I knew straight away that I wanted to work with her. 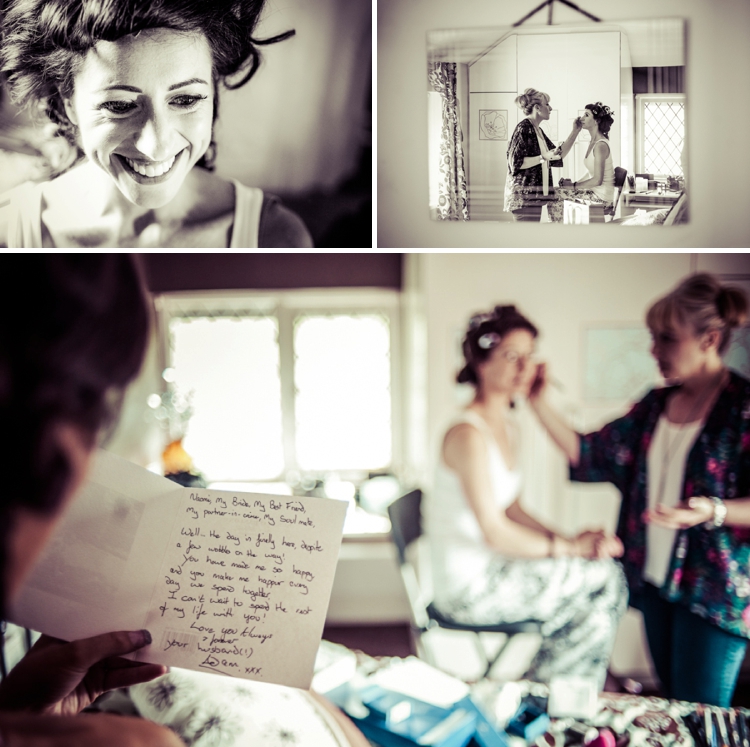 Adam wore a grey Ted Baker morning suit — he looked gorgeous! It was a three piece suit with an ivory waistcoat and cravat. 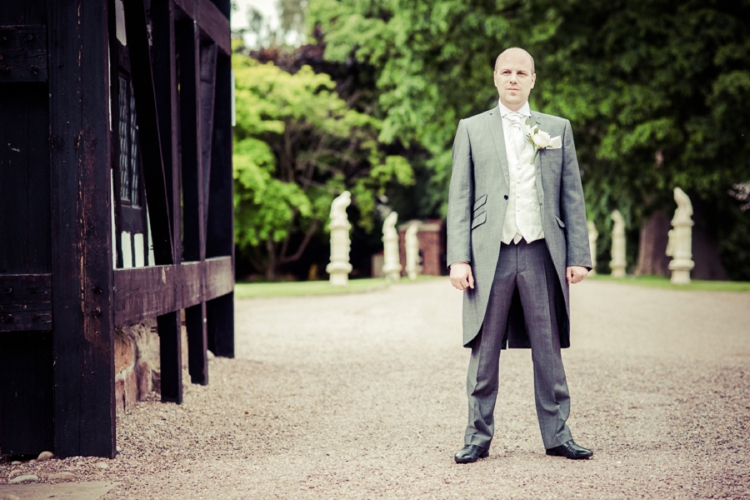 I wanted something different and not a typical white chuppah, so I did a lot of googling looking for different ideas and I worked with the florist and was quite specific about  what I wanted. I also planned for an outside chuppah, so wanted something to reflect this. In the end we created  a chuppah made from  sticks with Gerberas dropping down on a very fine wire in whites, yellows and oranges. 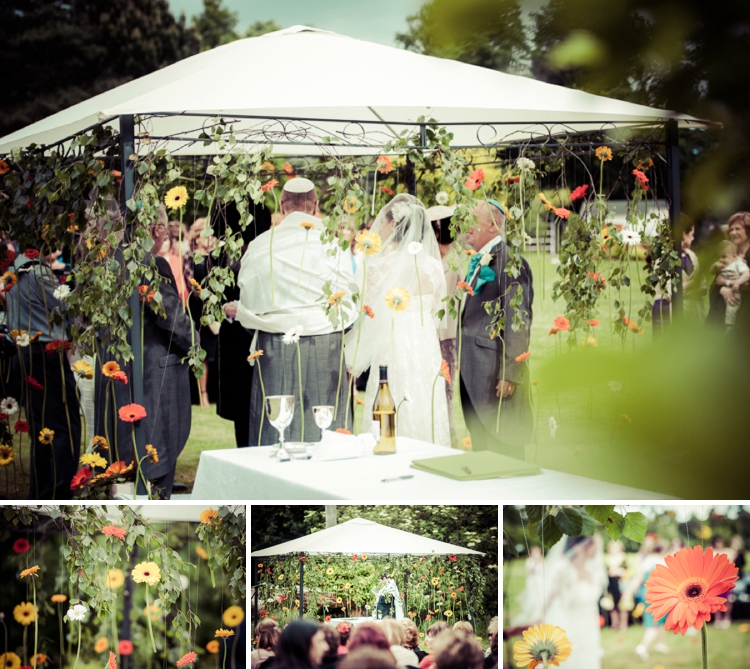 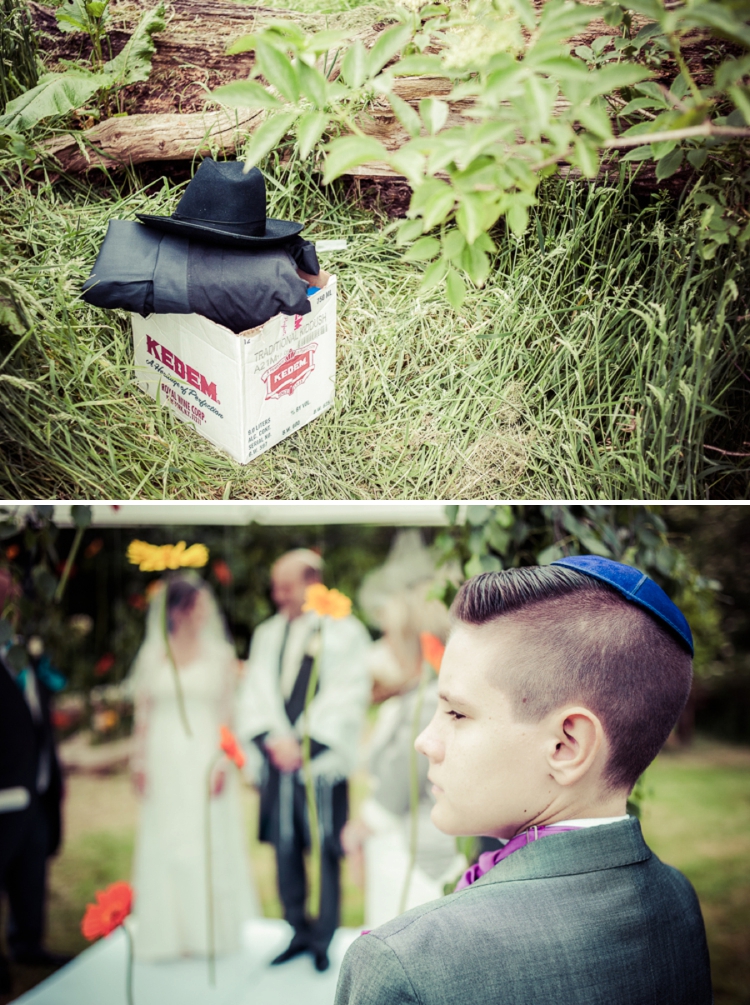 Our  florist was called Carl and he  owns a shop called Flowers and Cards. I had a bouquet of white roses with diamantes in the middle, surrounded by calla lillies.

My bridesmaids had calla lillies, and  the button holes for all the men (except Adam) were a rose. Adam wore a rose and a calla lilly.

The centre pieces on the tables were a tall wooden trellis  structure  with alternate orchids and calla lillies.

Our catering was done by a company called Ushy’s. Again, we didn’t want the standard soup and chicken, so we had a mini mezze to start with, and a lamb tagine for the main, with a chocolate fondue for dessert!

We used  Blake Ezra.  I met Blake a few years ago and followed his work and always loved what he did. I also wanted someone who I knew and felt comfortable with. Blake was our perfect choice.

Murray Ludwig at Ludwig Studios  was an amazing videographer. He captured all the moments, and was so professional – we never even knew he was there,  and the way he has created the whole DVD and highlights is perfect! 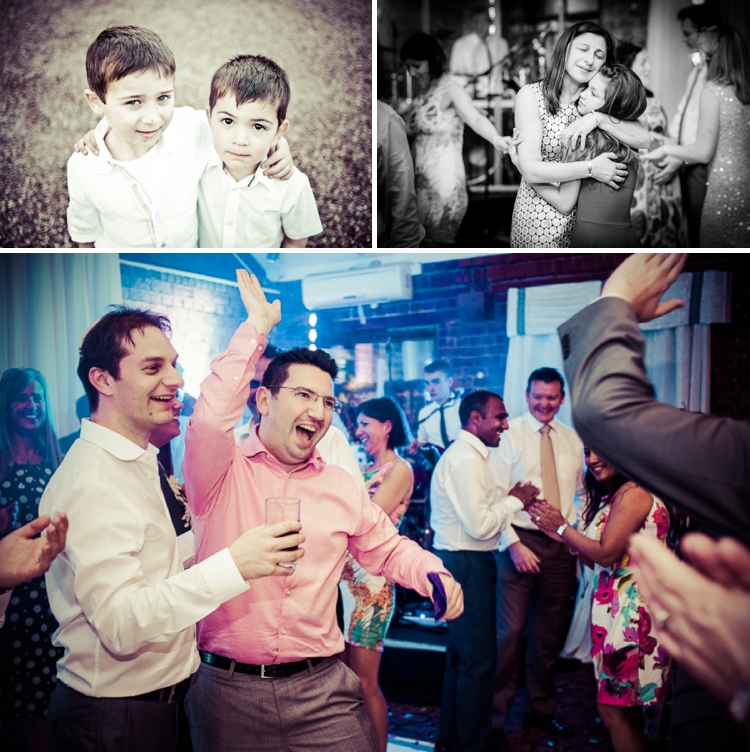 For the reception, we had a Sinatra impersonator called So Sinatra, He looked, sounded and acted just like Sinatra — he was absolutely  awesome! 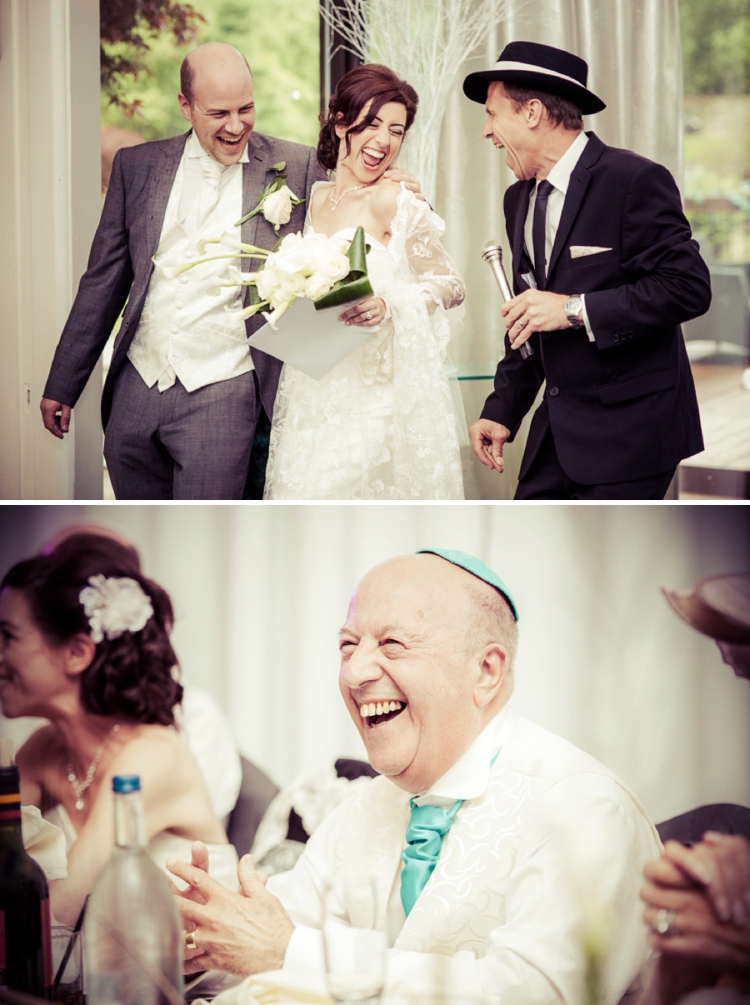 Later on we  had an amazing band called Storm. I knew their work as my cousin used to manage them and they are one of the best bands in the business. We had a string trio for the ceremony and then an 11 piece band for the evening that played during dinner as well.

Our first dance was Stevie Wonder’s For Once in My Life. I also created  all the playlists  — all upbeat songs and tunes  that have good memories.

a dance-off between the men and women

During the dancing, the music cut and two guys came on to the dance floor. They were 2 break dancers called the Urban Jokers, we didnt know anything about them –  the band and my dad had sorted this as a surprise and we had a dance-off between the men and women!

We also had a caricaturist called The Mad Badger  during the evening to entertain the guests that weren’t so into the dancing side of things. The main thing we wanted  was to have a relaxed day, nothing too serious and for the guests to have fun and enjoy themselves.

I love bubbles, so as well as a bubble machine when the guests walked from the ceremony to the reception, I had mini bubbles on the table with coloured lids to match the colour scheme.

Also, instead of set place names, I had everyones names etched  onto wooden hearts that were tied around the wine glasses so the guests could take them home as well. 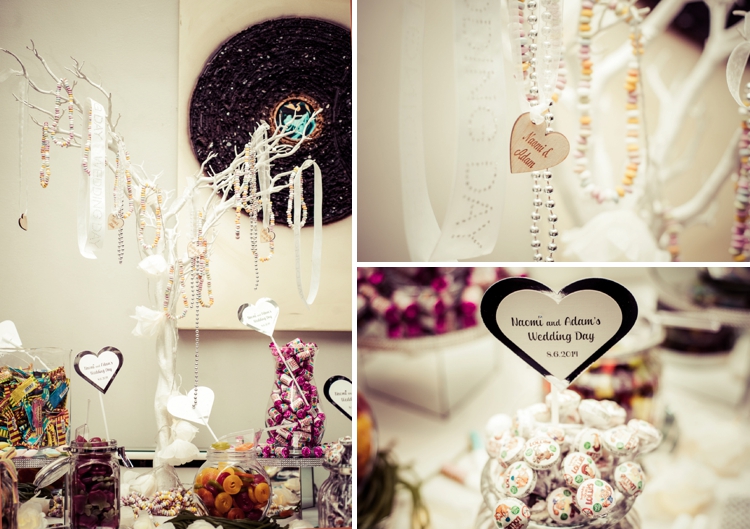 Enjoy every second as the day goes far too quickly…