Home > Real Blogging Brides: Clare – Confessions of a Wedding Dress Shop Avoider (including how I found The Dress!)

Clare will be marrying Chris on 5th May 2018 at Laura Ashley The Manor in Elstree, UK.

THREE FACTS: (1) Clare is not Jewish but discovered Smashing The Glass via her Jewish sister-in-law and during her wedding planning journey it has (in her own words!) became her favorite and most useful wedding blog (2) She finds STG refreshing in a sea of wedding blogs as she loves reading stories of couples for whom the ceremony itself is as pivotal as all the other details. (3) Due to falling in love with so many amazing Jewish weddings through the blog, and then booking a wedding consultancy session with STG founder, Karen, it confirmed to her that there were a number of Jewish elements she was going to bring into her wedding that symbolise a lot of things that are very important to her and her fiancà© in their future marriage – she will be having a ‘Jewish-inspired’ wedding! 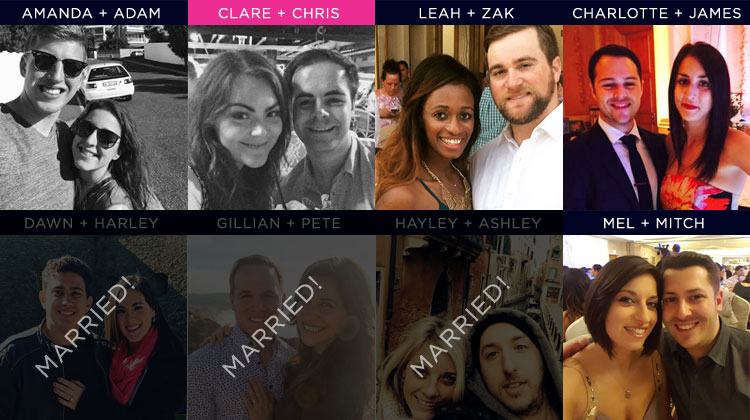 When I was young I used to play ‘weddings‘. My mum in fact recently revealed that she has lost her wedding veil and believes it’s because it lived for some time in my dressing up box!

I once claimed my future ambition to be a wedding dress designer and carried around a note pad with my creations (all variations on a theme of a puffy ball gown, very early 1990’s…) I also used to make my mum drive slowly past the bridal shop in our town so I could peak in the window and check out the latest designs.

So all of this and yet ironically I have only just bought my wedding dress for our wedding in just over five months time. Bearing in mind we got engaged summer 2016 you can imagine the looks of disbelief, the gasps of horror and sheer exasperation of my mum, bridesmaids, work colleagues etc! 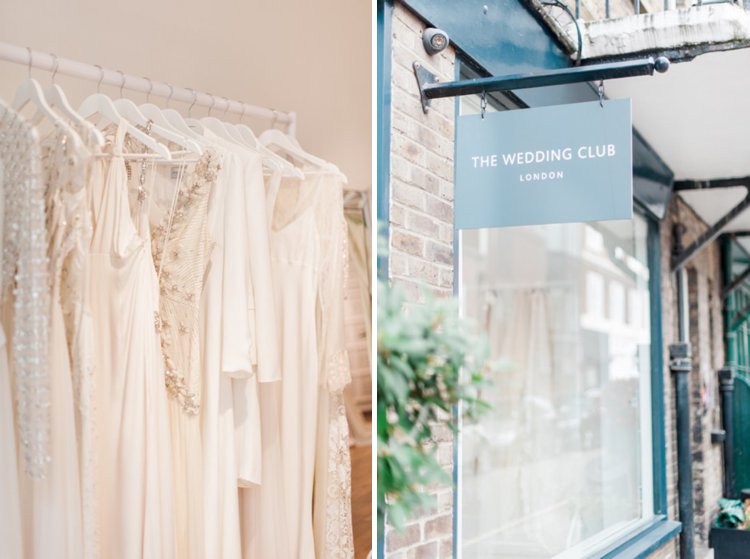 However, if truth be told, I was actually avoiding choosing a dress. Perhaps it was the risk of not meeting the expectations of my childhood dreams, perhaps it stems from years of being unhappy with my appearance and the innate fear that everything would look like some kind of sack of potatoes?!

The problem is that wedding dresses come with all sorts of dilemmas. Not only is this THE dress, the dress that you will be photographed in, that could be scrutinised by multiple guests, that you only get to wear the once (vow renewals aside!) but it’s also not like any other dress you’ve ever worn or are likely to choose again.

I have perfected the art of what suits me and can comfortably pick a black dress for a night out or find that perfect pair of skinny jeans that make you feel great, but choosing a dress in such an alien style filled me with a bit of horror over what would look good.

What would please my fiancà© as much as my favourite LBD, would channel my inner Kate Middleton, would make my mum cry and have a sea of faces ooh and ahh as I walked down the aisle?!

So following some much frenzied pinning of a variety of dresses and constant Instagram swooning following my engagement, I did nothing else dress related for over the last 17 months…

First came the plan that I would go in the Spring, a good year ahead of the day, this would give me plenty of time. April came and went, followed by May, and then it was summer and I decided I just couldn’t possibly risk sweating in the dresses (!) so the proposed shopping trip got delayed to September. Following some tough family times that month we were suddenly in Autumn.

There was around six months until the day and the looks of horror when people asked and discovered that I had no dress were becoming more and more intense! So the appointments had to be made, and as discussed in my last post I made some firm decisions after being inspired at Brides The Show. 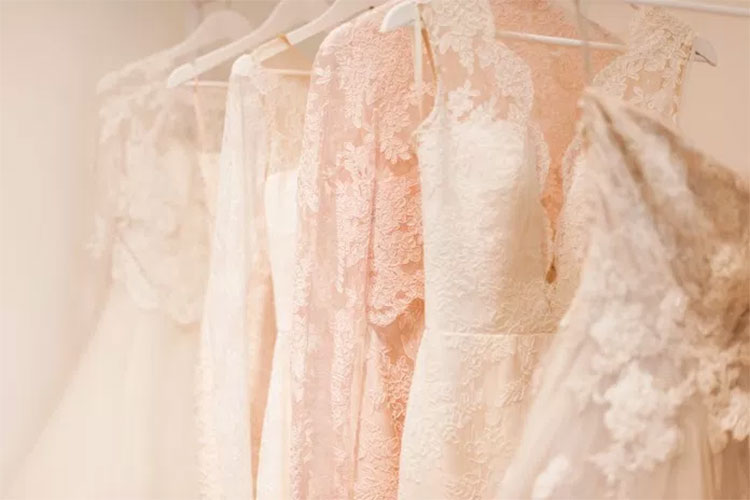 First off, not such a great experience…

In the meantime I must add, I did do some bridal shopping, pretty much forced by my mum and godmother (who also happens to be my matron of honour, otherwise known as the ‘MOH’). They suggested a trip to an off-the-rack bridal store with the sole intention of trying on different shapes and styles to whittle down what I was after.

I won’t mention the name of the store as I am going to pretty much slate them, but they’re a chain who serve the purpose of the no-appointment-necessary, bargain basement kind of wedding dress. Given we had absolutely no intention of purchasing any of these dresses, this took some of the pressure off and I arrived feeling apprehensive but not too horrified at the thought of what was to come.

Unfortunately I hadn’t prepared myself for the true horrors that would follow! Whilst this experience is handy for getting an understanding of what suits your body shape, it is not much fun in the process! Only being allowed to try on four dresses at a time and a queue system for the changing rooms meant that approximately an hour of our time was spent just sitting waiting. With limited sofas, feeling cold and no refreshments, my patience wore thin pretty quickly!

In a row full of curtained cubicles you’re ushered in with an assistant you’ve just met (and you won’t be seeing again on your next round!) After standing pretty much naked in front of this stranger, putting on a face mask and being insisted that you put your arms up so they can pull the dress down over your body, it’s finally on! Whipping the mask off your face, you look into the mirror with the hope of seeing yourself as a glamorous bride…. to be met with ‘sorry I can’t zip it to the top in case it stretches!’ Just what every bride wants to hear!

With a dress that’s not properly done up and doesn’t really fit you’re then paraded out to your awaiting audience which is not just my trusted two but actually around 15 mums, grandmas, best friends who are bored waiting for their own friend and are now staring at you. To say I looked and felt totally unimpressed is an understatement!

I could go on but I think you get the drift that this sea of polyester was not the one! Would I recommend other cautious and unsure brides to do a similar experience before going to the ‘real’ dress shopping… hmm, possibly not, but do consider boutiques, like the STG recommended bridal stores, that will offer you a range of styles and have the patience for you to try them all on! 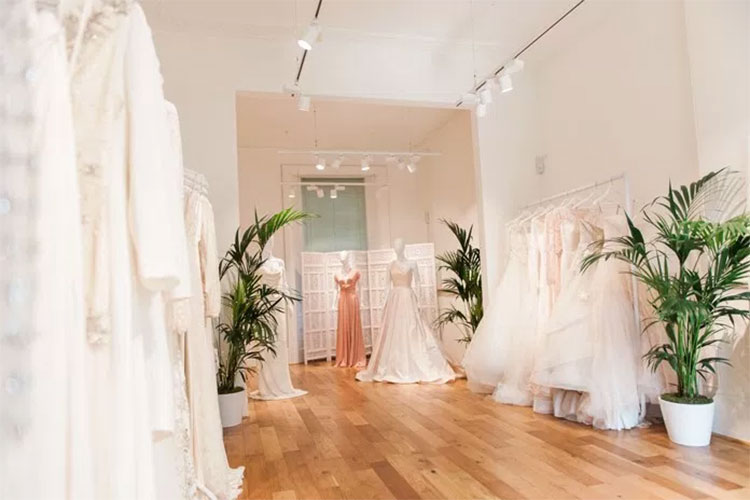 ….followed by a dream wedding dress experience where I found The One!

So, for the real dress shopping experience…

I took a day off, gathered my much trusted entourage of two and descended on The Wedding Club in South Kensington, as recommended by Karen, founder of Smashing The Glass, whom I met in person at my wedding consultancy session back in April.

I cannot deny I was nervous that morning. I felt nauseous. I was partially excited that this could be the day I found ‘the one’ and partially terrified that everything would once again look awful on.

I need not have fretted. From the moment I walked in, the experience was a dream. For one thing, the store was open to only us and having this personal experience allowed me to feel completely at ease and have no fear in trying on everything and anything.

Secondly, the dresses were actually nice! Beautiful in fact. There were many I could have tried on and at first I felt a little overwhelmed at the sea of ivory. But the assistant asked me a couple of questions about my wedding day, what I thought I wanted etc, and before I knew it we had six dresses to try on!

I must say that I did like every single dress I put on. I was convinced they would never go on, the samples being mostly two-three sizes smaller than I typically wear (and after being scarred by the lady at store of horrors telling me to look at dresses a whole three sizes bigger than I am!) there just was no way they would even go over my hips. I was met with great reassurance and was unbelievably surprised (and a little excited!) when they actually did go on. Okay, not all zippers went to the top and I had some boob squish going on, but they were on!

Even with my black knickers showing through (no, I did not follow the nude underwear advice and if truth be told it really didn’t matter and we all had a good laugh in the process!) I finally felt like a real bride.

To cut a long story short, around four dresses in I looked in the mirror to see what I thought must be my favourite yet. I walked out and arranged myself perfectly for my mum who had been covering her eyes in anticipation that this one could really be THE one. I was met with complete silence, followed by the two of them looking at each other, saying a firm ‘yes’, before promptly bursting into tears!

So there you have it, I didn’t really follow any of ‘the rules’ of dress buying. I ended up with something that certainly had elements of my Pinterest board but I’m not sure I ever would have picked off the rail.

Miraculously, we all found something we thought was just perfect; which, given a few initial disagreements, had looked potentially tricky. Early into the trying on process it transpired that I didn’t even really want to look like Kate anymore and was aiming more for a Kardashian vibe. For the two mums, this was not met with enthusiasm as they were definitely thinking more classic Duchess of Cambridge look!

After months and months of planning everything but the dress I now have a feeling of contentment and the sense that I actually can’t wait for the day to come now. What I thought was going to be the hardest thing actually turned out to be really, pretty easy. 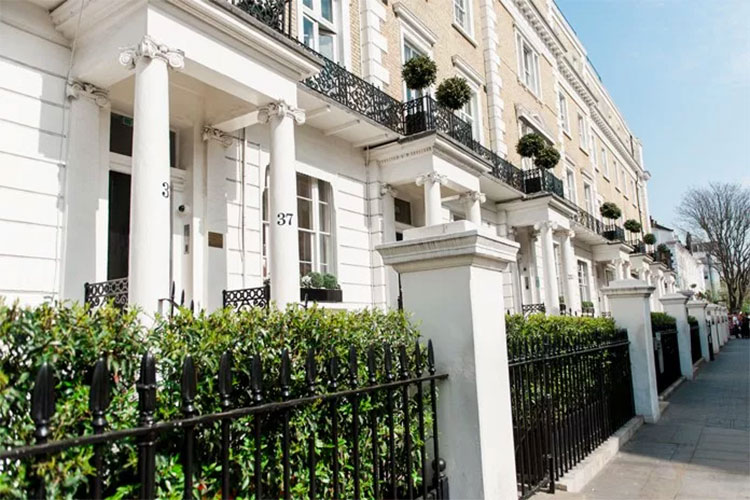