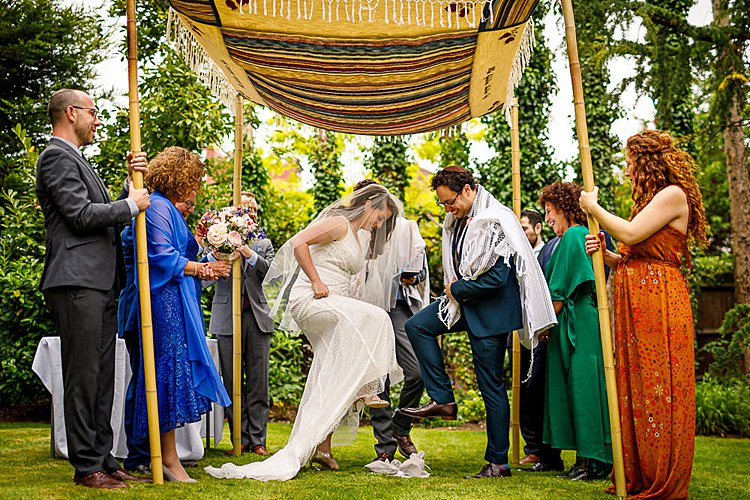 We love it when a couple crafts a Jewish wedding that stays true to their values – so naturally we’re crazy about the fab celebration of Natasha, who runs Urban Cordial, an all-natural, low-sugar cordial brand made using British surplus fruit, and Jacob, a theatre producer who grew up in Australia!

Given Natasha’s business, it’s no surprise that sustainability is important to these two – and they incorporated it into their day through touches like sourcing seasonal vegetarian British food, reusing the chuppah canopy of their friends Ashley and Adam, and donating their flowers to a hospice and a women’s shelter at the end of the night.

Possibly the coolest sustainable touch, though, is the way Natasha and Jacob created their wedding jewelry: the two worked with goldsmith Rachel Jones to create their rings from heirloom pieces. Natasha’s engagement ring was made using gold from Jacob’s grandmother’s bracelet, a diamond from his grandmother’s engagement ring, and a sapphire gifted to the couple from Jacob’s mum. Then, the couple did a workshop with Rachel where they handcrafted each other’s wedding bands – how special is that?! Photographers Lina and Tom captured everything so perfectly, as did videographers  Moon and Back.

Natasha and Jacob are lucky enough to be friends with the incredible Dan of beloved Smashing The Glass Recommended Vendor The Function Band, so they were a natural pick when it came to entertainment for the reception – and true to form, the band went all out learning new songs, keeping guests on the dance floor all night, and even throwing in an impromptu song and dance bracket featuring some Aussie classics in honor of the groom! The Function Band also provided the epic lighting for the party – something Jacob was especially attuned to given his theater background.

Oh, and did we mention that this duo smashed not one but TWO glasses (one each)? We could go on and on, but we’ll let Natasha – who looked radiant in Eliza Jane Howell – take it from here… 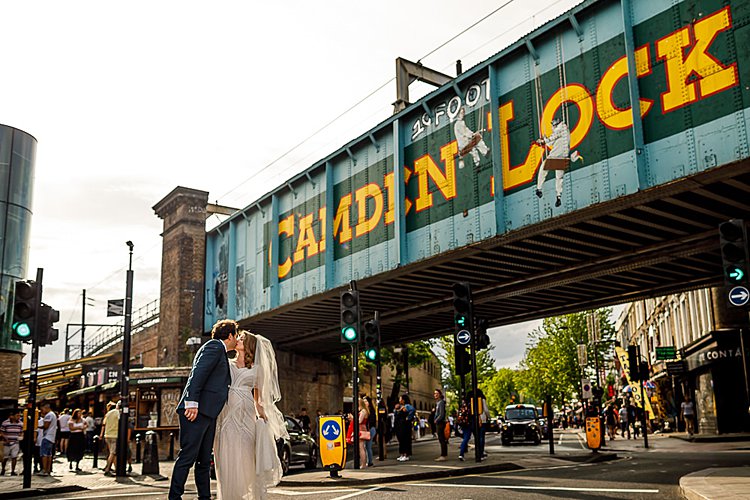 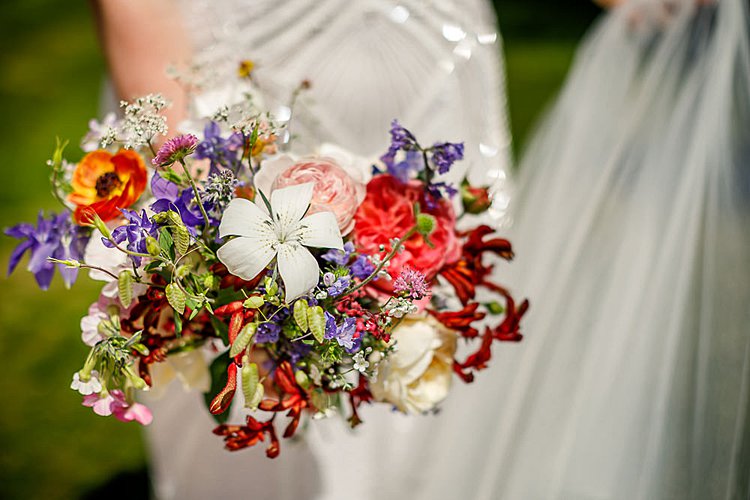 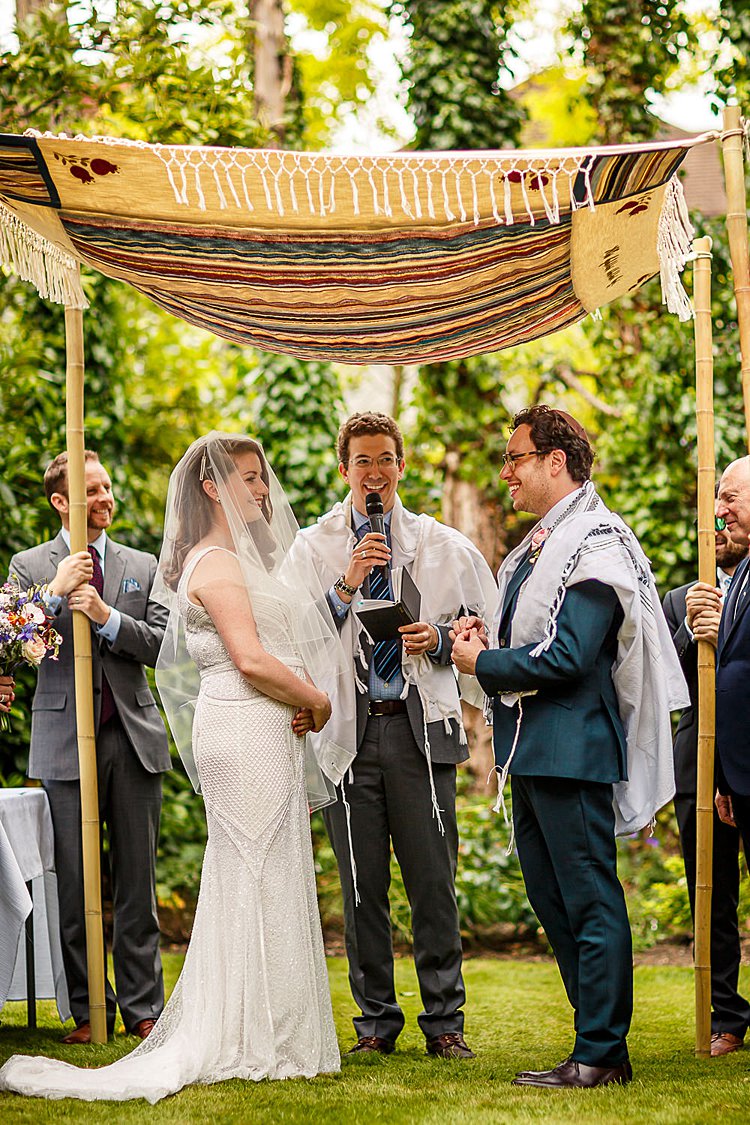 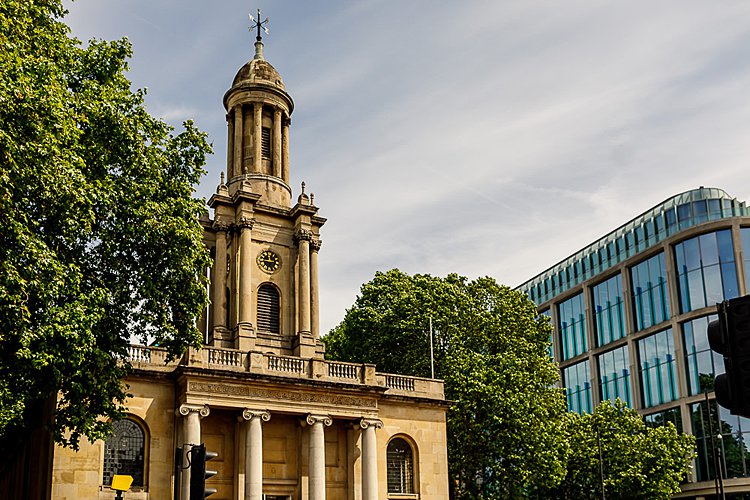 Natasha, the bride and Jacob, the groom : We met at a mutual friend’s house and Jacob helped Natasha take some photos of drinks using her cordials for social media. He still helps her with this kind of stuff. END_OF_DOCUMENT_TOKEN_TO_BE_REPLACED 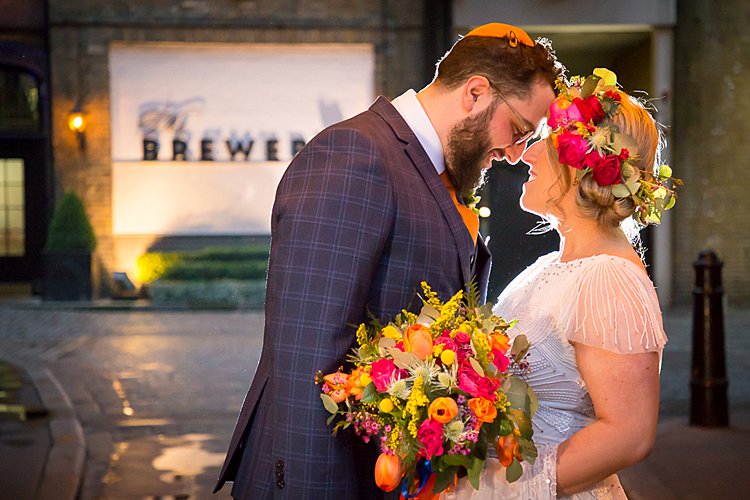 We love it when a couple gives their values a starring role in their Jewish wedding. And Miriam, an environmental consultant in the water sector, and Lazarus, an intellectual property manager for a green hydrogen start up, did exactly that for their beautiful big day at beloved Smashing The Glass Recommended Vendor The Brewery.

Unsurprisingly, sustainability is a big deal to these two – and they followed through on that value by using e-vites instead of paper, a mix of fake flowers along with fresh to reduce waste, and gave out wildflower seed favours for guests to plant to help save the bees.

We also love how Miriam and Lazarus worked with their rabbi to incorporate some feminist touches into their Orthodox ceremony – like having Miriam say a line back to Lazarus after he gave her the ring, and having female guests reading the Sheva Brachot in English as well as the men saying them in Hebrew.

Even cooler is the way they went about making sure all of their guests, Jewish and non-Jewish, felt involved in the wedding: Miriam and Lazarus went a step further than an explanatory order of service on the day, instead opting to send theirs out to guests in advance – along with FAQs about Jewish weddings and videos and music clips to prepare everyone for the dancing!

We love how Smashing The Glass Recommended Vendor Michael Lee’s photography captured all the fun, energy, and bold colours of the day – and he came up with some awesome ideas for creative shots.

Now over to the bride, who looked simply stunning in her vintage-inspired Eliza Jane Howell dress (not to mention that epic flower crown!)… 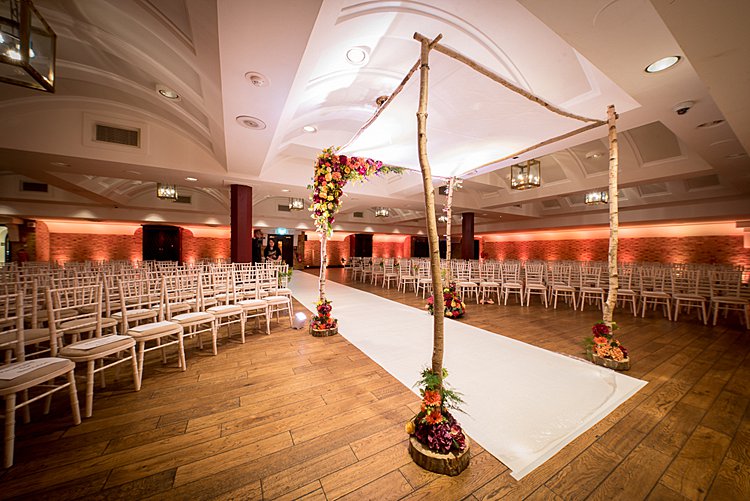 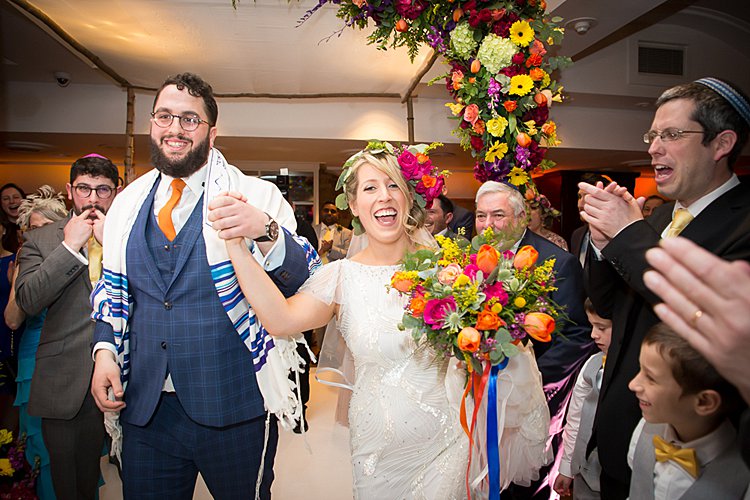 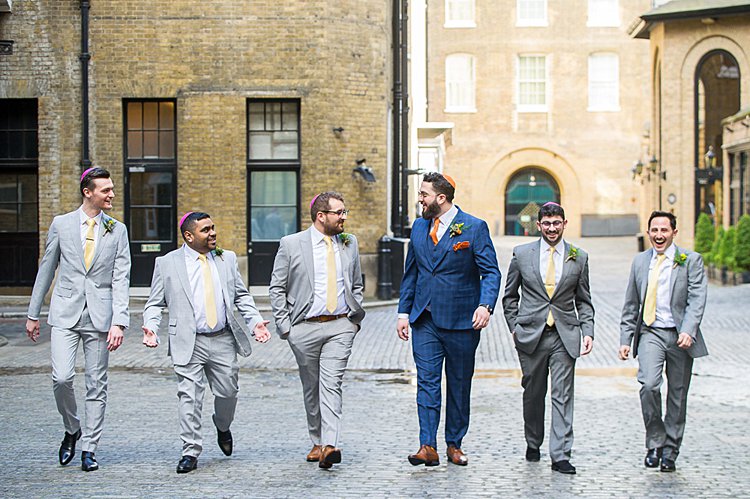 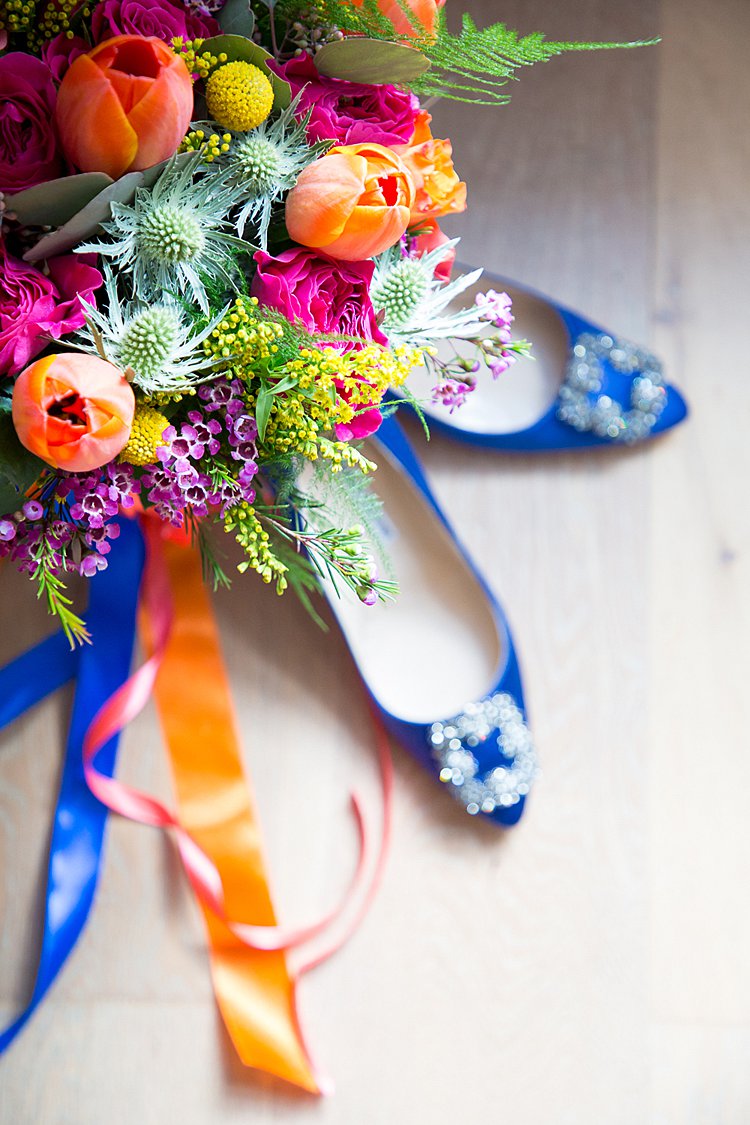 Miriam, the bride: We met on JSwipe – a truly 21st century couple!

END_OF_DOCUMENT_TOKEN_TO_BE_REPLACED 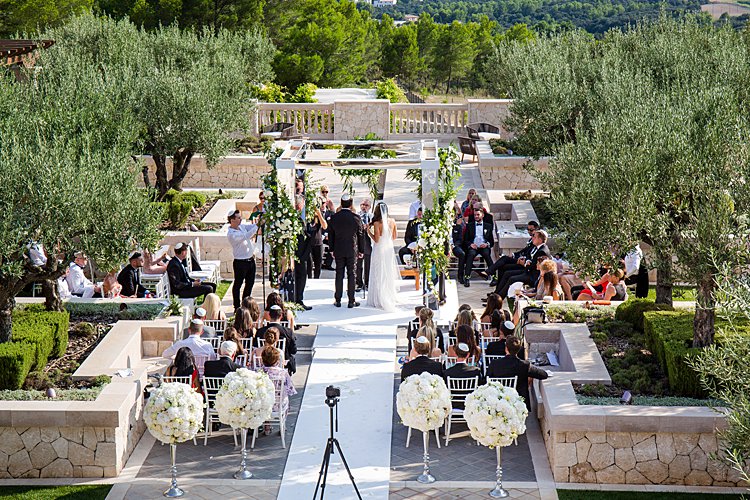 OMG HOW dreamy is Jade and Andy’s destination Jewish wedding in marvelous Mallorca?! Their venue, Park Hyatt Mallorca, is just BEYOND — it may be a hotel, but it feels like an ultra-glam villa. Of course, the stunning natural surroundings — mountains AND oceans — don’t hurt, and neither does the fact that beautiful bride Jade is a pro wedding planner herself at Fantastique London (she also has a fab lifestyle blog!).

Unsurprisingly, she made some AMAZING design choices – we’re obsessed with the super cool mirrored silver chuppah — cleverly set up to reflect the gorgeous grove of olive trees in the sunken garden surrounding the ceremony space!

We also love how Jade and Andy opted to seat their guests in a square formation on all sides of the chuppah, to enhance the intimate feel of the day — such a nice idea, especially if you’re having a smaller wedding like these two did.

Weddings don’t come much more photogenic than this one, and Smashing The Glass Recommended Vendor Denee Motion absolutely made the most of the cinematic surroundings — the aerial shot that opens his epic trailer is unforgettable — as did Signe Dzile Photography in her beautiful images.

Gorgeous Jade looked totally smashing in her Eliza Jane Howell dress from STG Recommended Vendor Mirror Mirror in London, and we’re not at all surprised to read her rave review of the “amazing” personalized experience. Jade, over to you… 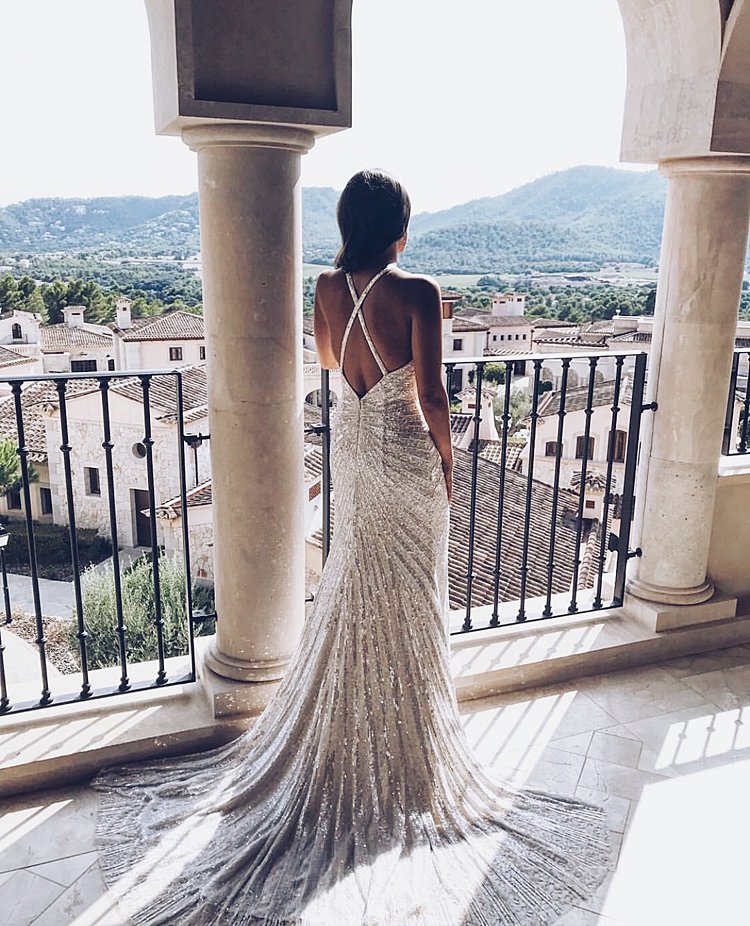 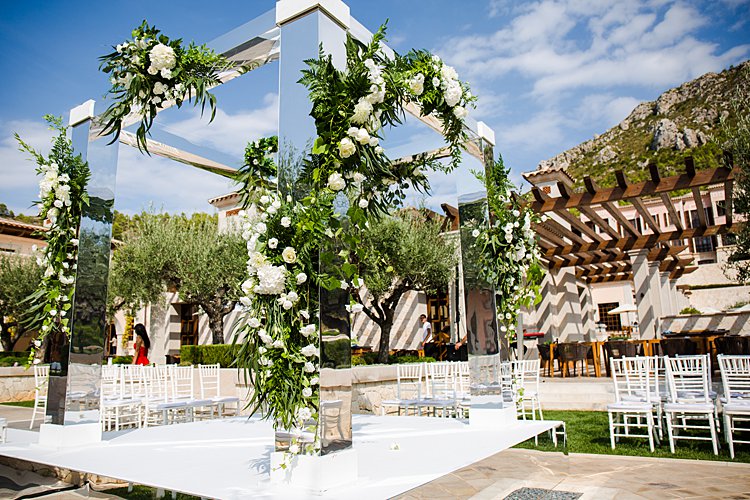 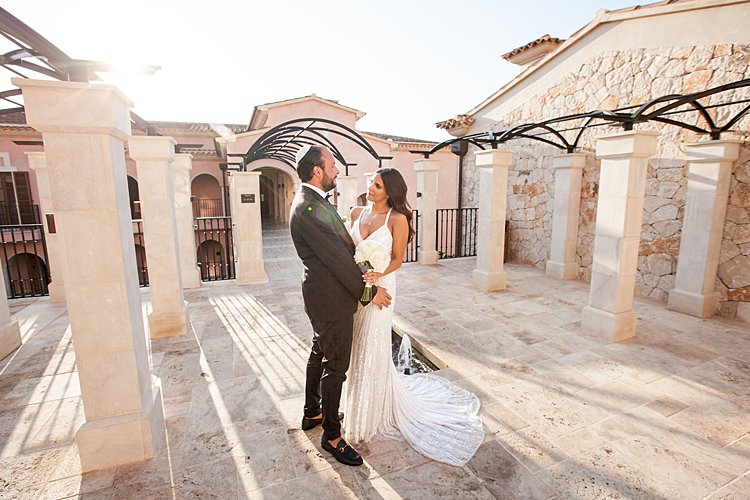 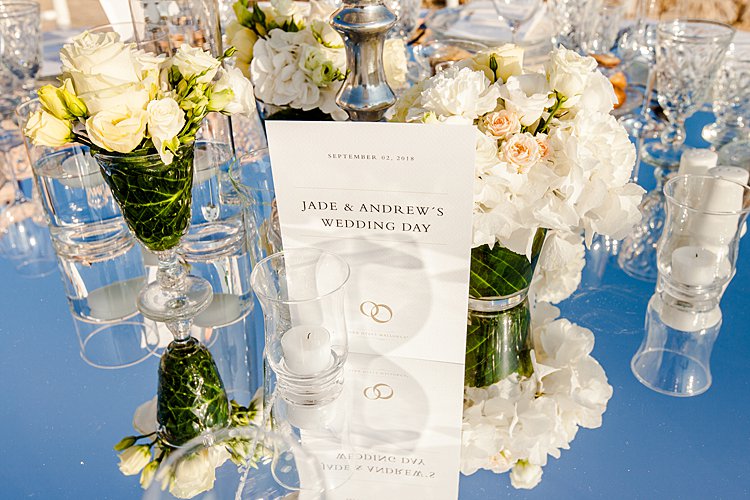 A Destination Wedding in Mallorca

Jade, the bride: We frequently go to Mallorca but had never visited this side of the island and wanted something different from the center of Palma. Being an event planner, I didn’t want a typical hotel look.

Park Hyatt Mallorca has been open for 2 years and has been built like a Mallorcan town. The resort has stunning mountain views and sea views of Canyamel beach. It offers 5* luxury but without that typical hotel feel.