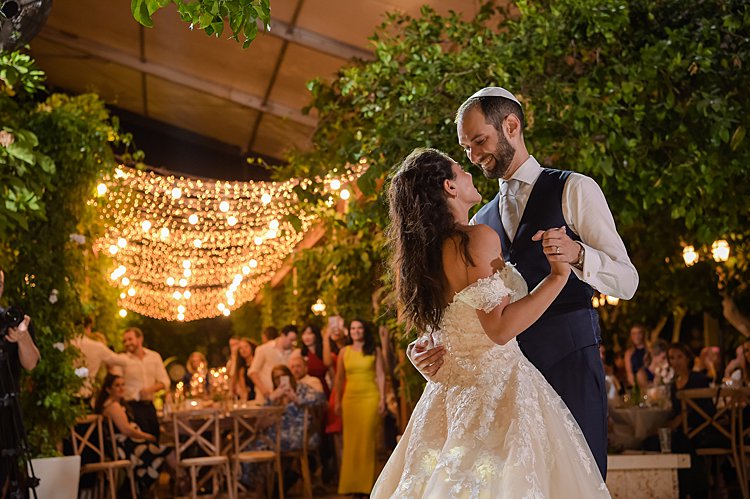 We’re so excited to be featuring the magnificent Jewish wedding of our beloved STG Brides Club member Davina, a hotel developer, and Adam, head of digital product for a legal publisher! These two had a positively dreamy destination wedding at Achuza Beit Hanan.

We adored following Davina’s planning journey in Smashing The Glass’s Brides Club, and we’re so touched to hear her kind words about the group:

Talking to the other girls getting married in Israel was a massive help. I could ask anything on the group and get advice, like my virtual bridesmaids… I also met some amazing girls who are now really close friends.”

Davina also found a bunch of her incredible vendors through Brides Club, including Smashing The Glass Recommended Vendor Emily & Jo, who helped the couple craft a pretty, classic design featuring their monogram that they were able to send both by post AND digitally, for their further-flung friends and family.

And then there’s Davina’s gown, which is pure, classic bridal glamour. Although she visited a number of bridal boutiques, Smashing The Glass Recommended Vendor Mirror Mirror was the uncontested winner – and the place she found the Pronovias dress of her dreams. Davina can’t stop raving about the impeccable service she received from the whole team at Mirror Mirror, from the moment she stepped in the door through the final fitting.

Davina found the perfect match for her gown in an elegant pair of heels from Smashing The Glass Recommended Vendor Emmy London – not only did the lace on the shoes match her gown, but Davina raves that the heels were comfortable, too!

Keep scrolling for some serious wedding magic – we’re positively head over heels for the simply magical photography from Haim Afriat and videography by Nir Tenenbaum. 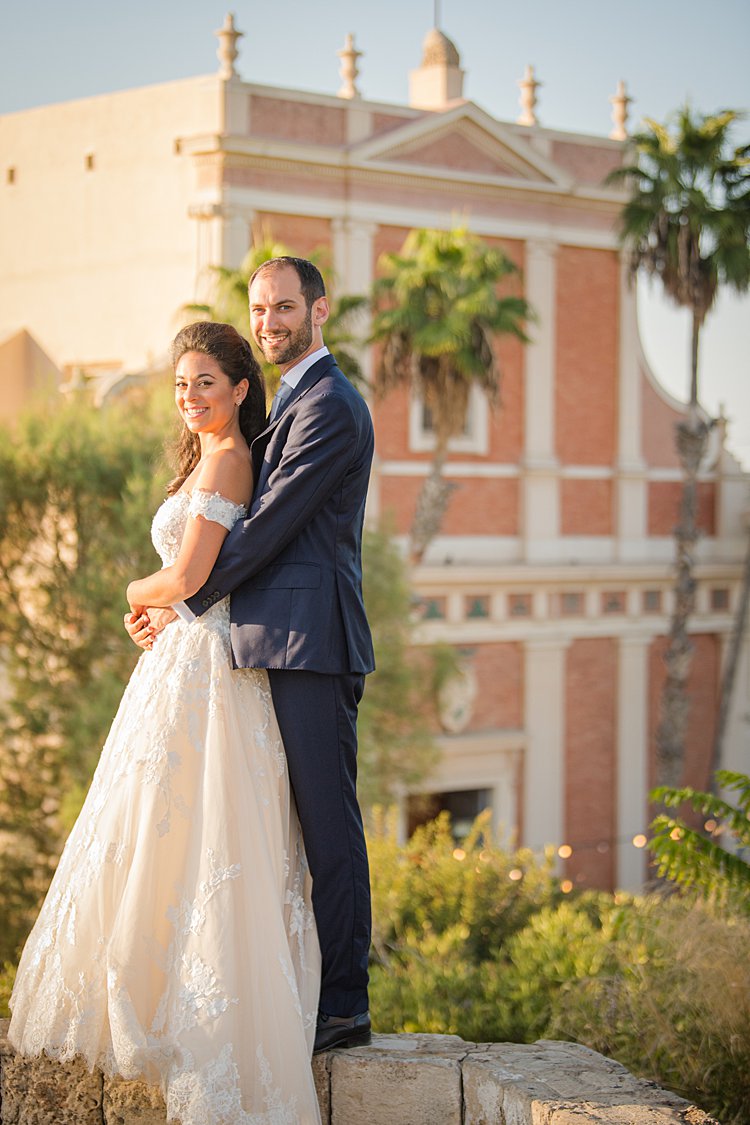 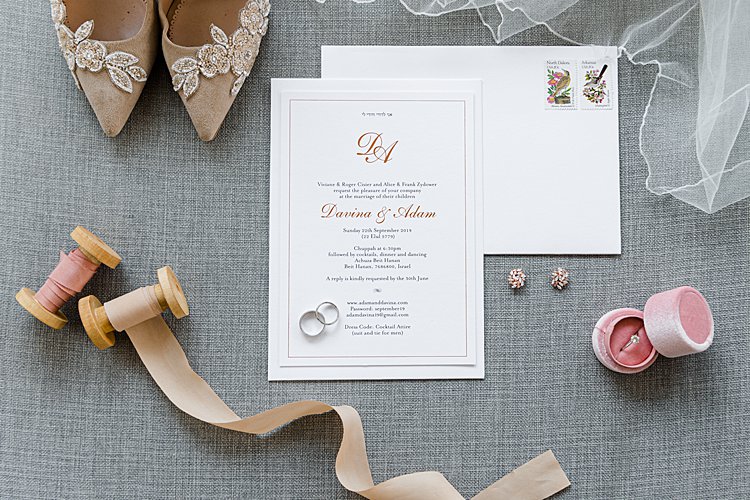 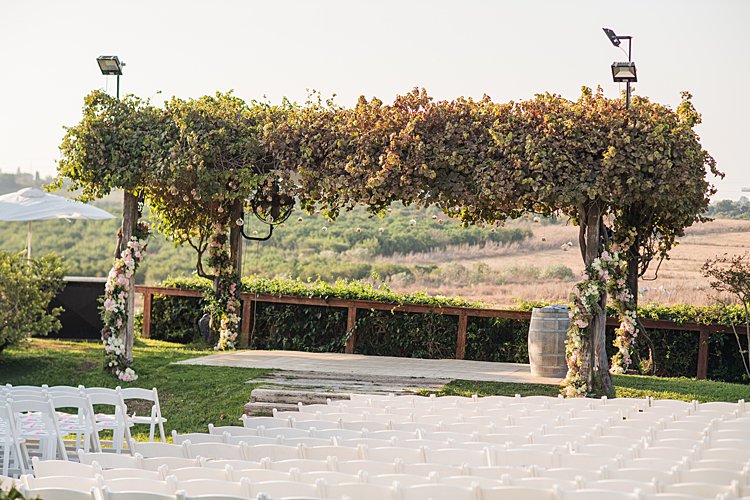 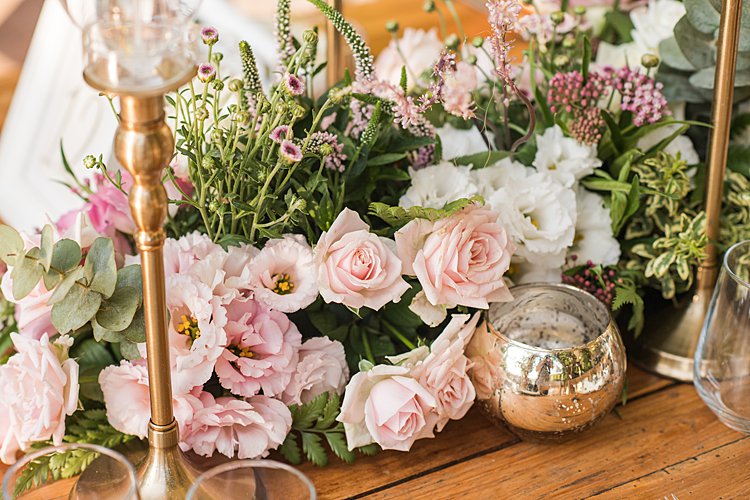 How we Met (both sides!)

Adam, the groom: About 2 years ago I was at a Shabbat dinner with some friends at the Marriott in Regents Park, London. On arriving I met and chatted with a friend named Lisa, while also noting a large attendance. During the evening, my attention was drawn to one of Lisa’s friends, who didn’t stop smiling and laughing. I couldn’t take my eyes off her. I thought she was stunning!

At the end of the night I was determined to find her, as I feared I may never see her again. Searching through the crowd I found her and we had a quick conversation that ended with me suggesting that we meet again. Two years later, I’m very excited to be marrying that girl, the beautiful Davina.

Davina, the bride: My flatmate, Yael suggested we go to the 2016 CJL Shabbat dinner with some of her friends. We arrived at the Marriott, Regents Park to find the room packed with more than 300 young people. We looked for Lisa, Yael’s best friend and saw her talking to a guy, so we just said hi and moved on. I noticed he was wearing a very nice original grey and burgundy jacket and had amazing blue eyes.

At the end of the evening, I was talking to some friends when Yael told me that she was going home. I was about to pick up my coat to leave, when the guy with the grey and burgundy jacket stopped me and told me that Yael was looking for me. I reassured him, said that she found me and continued my route.I was on my way out when Yael, said to me “I think Adam wants to talk to you”. I looked at whom she was referring to and thought “Why not?” I asked her to wait 2 minutes so I could find out what he wanted. I didn’t know that this would be the first conversation with my future husband!

Three days later (yes, 3 days… what the hell was he doing?!) he added me on Facebook and invited me for a date. As I was travelling that week we had to wait until Sunday to meet. We couldn’t wait to see each other, so we started writing in the first week and didn’t stop. Two years later on the 29 September 2018 Adam surprised me by going down on one knee and asking me to marry him in a very romantic setting with candles and rose petals everywhere.

END_OF_DOCUMENT_TOKEN_TO_BE_REPLACED 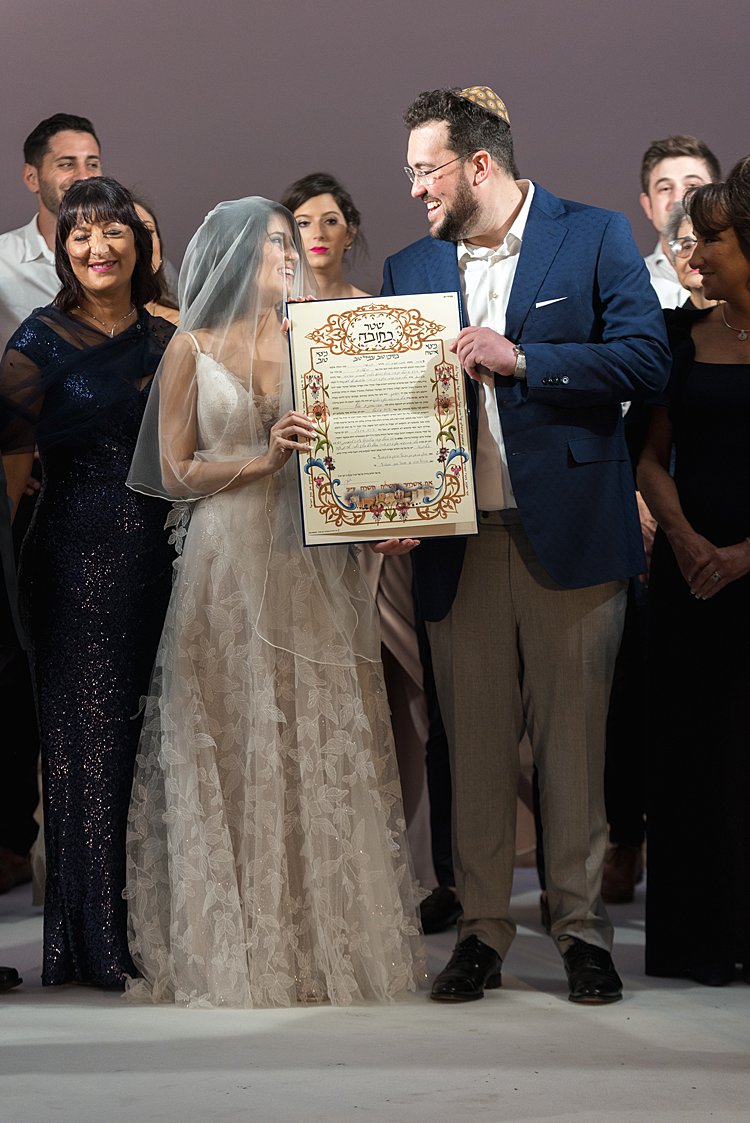 So we’ve seen surprise Jewish weddings where the bride and groom spring their plans on unsuspecting guests day of. But we’re pretty sure this is the first ever wedding we’ve seen planned entirely by the groom, as a surprise for the bride!

When South African couple Gemma, a PhD student in virology, and David, who has his own business developing properties, set off on their trip to Israel, the bride had no idea what her soon-to-be groom had in store for her. Gemma thought she was just off on holiday, but turns out David had actually spent the past 11 months secretly planning a whirlwind engagement (at the Kotel!) and wedding!

Unbeknownst to Gemma, David even coordinated with the couple’s friends and family from around the world, who all flew in for their surprise bash. We’re obsessed with David’s venue pick of Olmaya, with its jawdroppingly epic views of Jerusalem’s Old City, and Smashing The Glass Recommended Vendor Luz Weddings Photography captured it all so exquisitely – we’re in love with their gorgeous shots of the breathtaking outdoor chuppah!

Gemma looked so ravishing in her Irena Burshtein gown, you’d never guess she had only one day to choose it – between her whirlwind engagement and wedding! The amazing team even managed to turn around her alterations in three days.

This is one unique wedding, and we’re so excited to let Gemma fill you in on all the details… 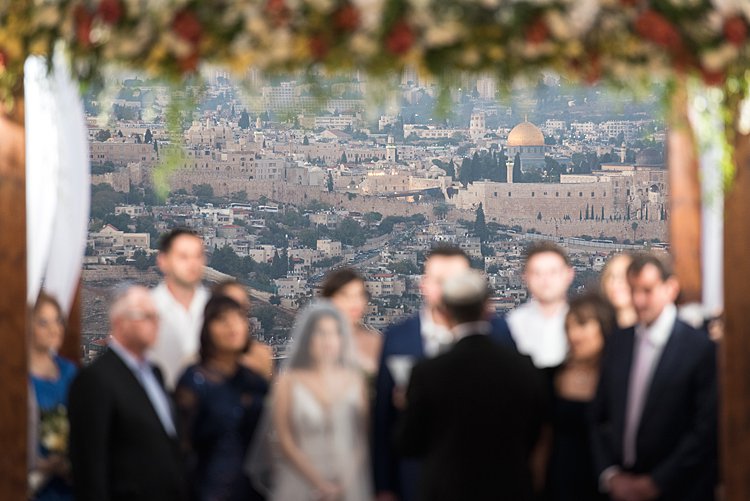 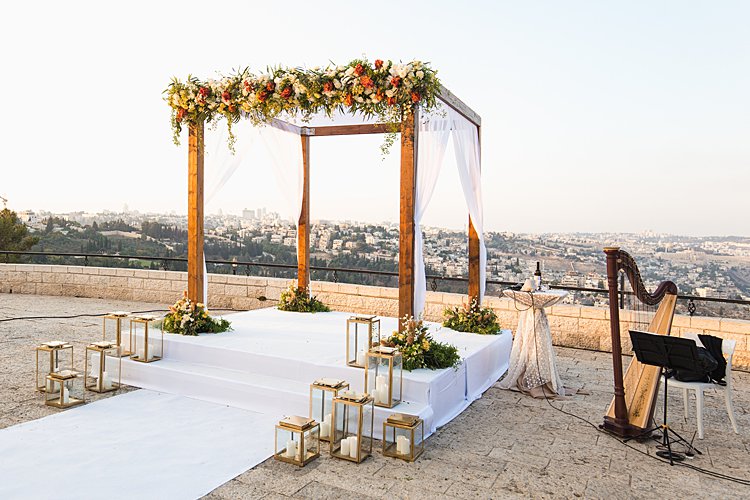 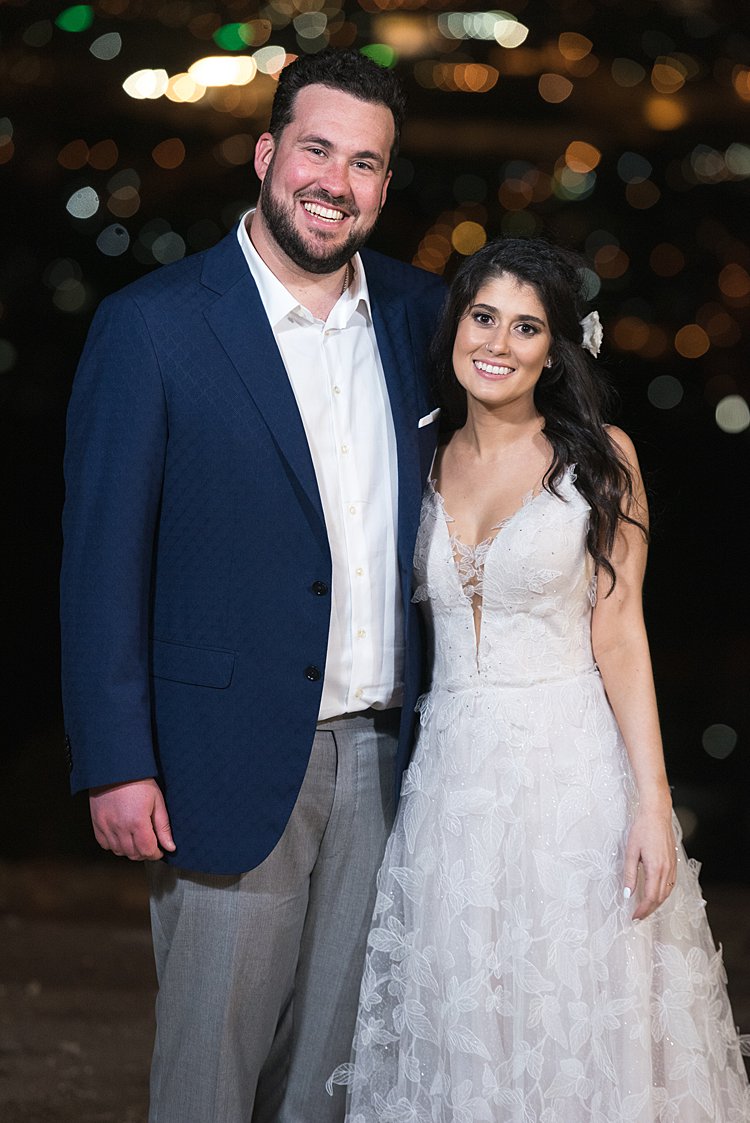 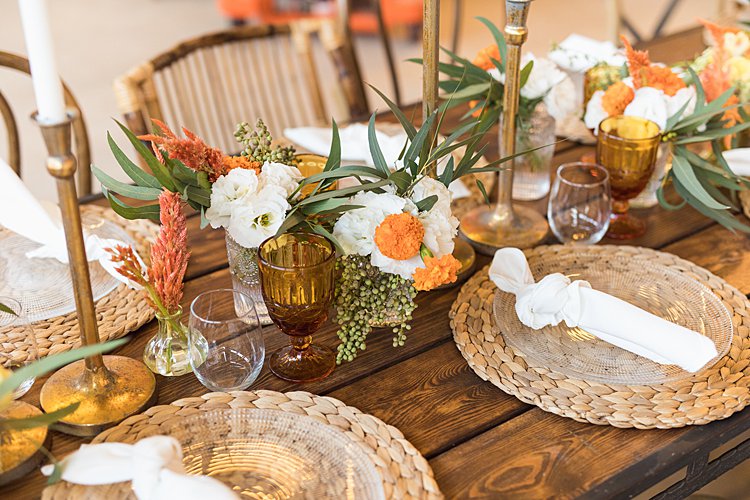 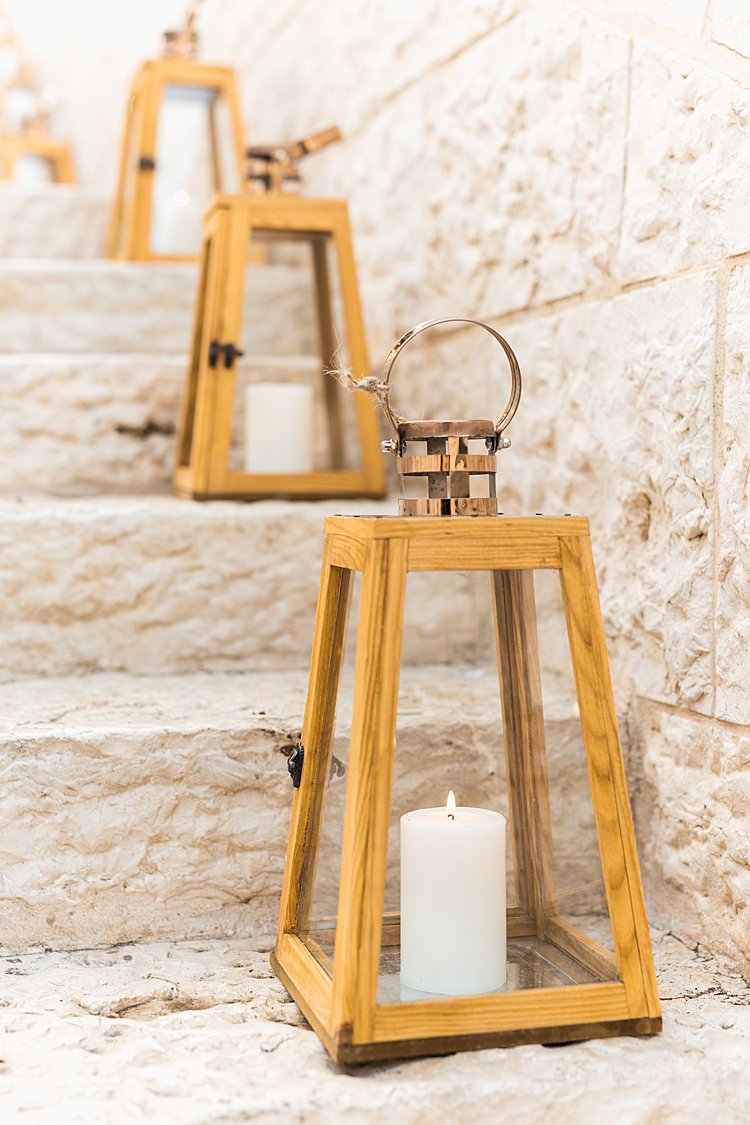 Gemma, the bride: We met in 2013 after being set up on a blind date by our mothers. Not the most romantic story, but quite a funny one. Moms do know best! END_OF_DOCUMENT_TOKEN_TO_BE_REPLACED