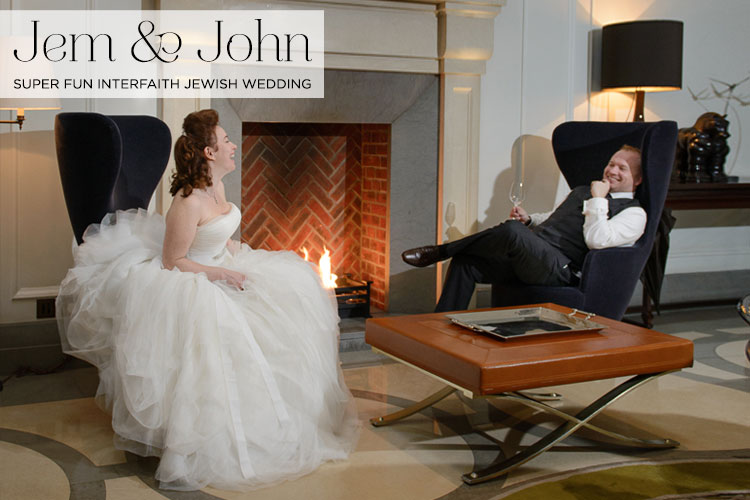 Today’s Jew-ish wedding can’t fail to put a smile on your face. It’s literally bursting at the seams with fashion, fun and some very original ideas. The bride and groom are a director and  actor respectively, and they incorporated some brilliantly inventive details  into their  day.

There’s a surprise  Fiddler & The Roof bottle dance  by the groom and his friends, an off-the-scale Pronovias  dress,  Vivienne Westwood shoes that I am MAJORLY  coveting, a dress code of ‘Imagine it’s the Oscar’s and get glamorous’, and one of the best Jew-ish wedding themes ever:  ‘The  Northerner & The Jew’. Genius! The bride  says:

My Judaism  is very important to  me — it is my cultural make-up. It was a big decision to get seriousâ€¨ with John but luckily I have a great family who adore him. And I adore his. Our upbringing often clashes, mainly â€¨over little things and we are having to re-write our own rules for our life together. We can’t base it on our parents but there are some great discoveries — like a bacon and challah sandwich. So wrong its right. So ‘Northern and the Jew’.

A  bacon and challah sandwich? Too good to be true! There are so many good interfaith ceremony wedding ideas here, one of my favourite being  the laying out of  flags out on each seat during the chuppah  with different Lancashire and Yiddish sayings.

Jem &  John  had a very personal wedding  and, not surprisingly,  the  report today is written by them both. All the fun comes from the exquisite  Corinthia hotel  in the heart of London with sensational imagery by  Rhapsody Road. 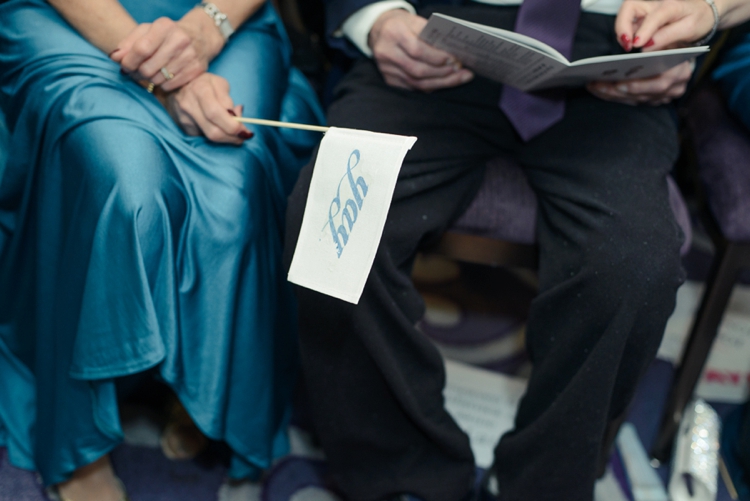 Choosing to get married at The Corinthia Hotel  London

Jem, the Bride: We were recommended to go and see The Corinthia  by a friend and fell in love with it. We have a love of architecture and restoration work and the way the hotel had been restored and modernised appealed to us. We also wanted somewhere in central London where we could have the ceremony and reception in one place.

John, the Groom: The place is magnificent. As Jem said, the architecture is splendid, the refurbishment is top notch. The welcome from the door staff was fantastic. In fact, everything was exemplary when we looked around. It just made sense. Once we had the food tasting, we knew it was money well spent. 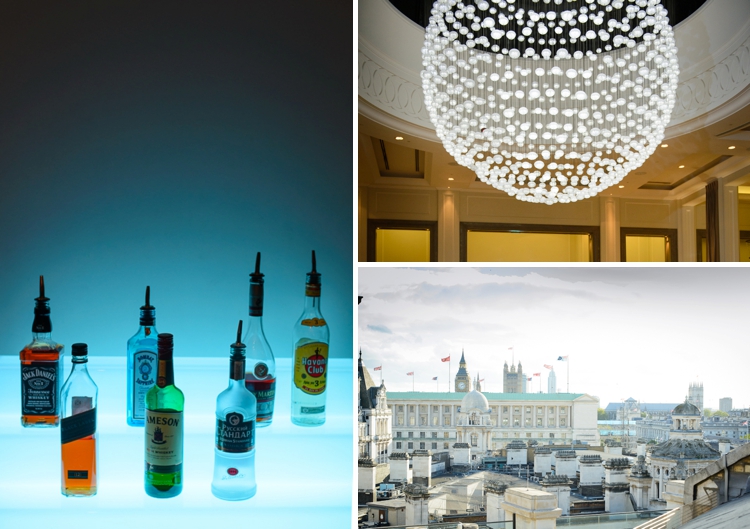 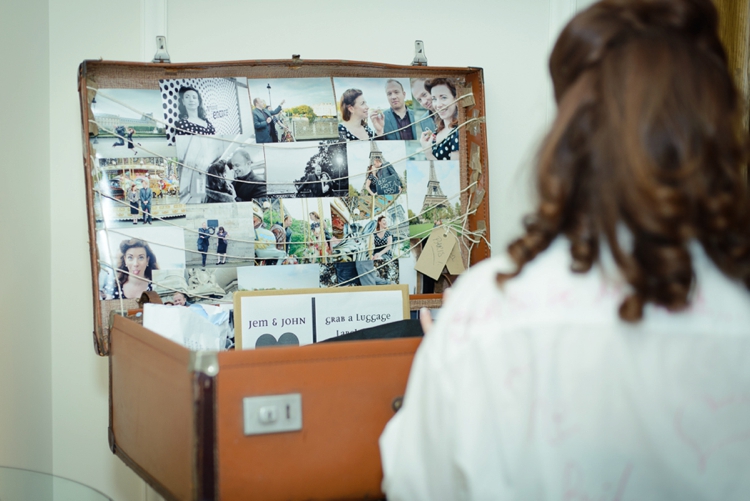 Jem:  We had a sort of 1950’s hollywood glamour theme (ish) mixed with my Jewish background and John’s northern! We wanted decadence but for everyone to feel very relaxed and ease and taken care of.

We had a designer friend create our invitation –  Ami-Lou Sharpe who took traditional theatre tickets as a starting point. She created cartoon characters of us as well that we used everywhere, on our name places, the kippahs, the wedding programme and even the cake! 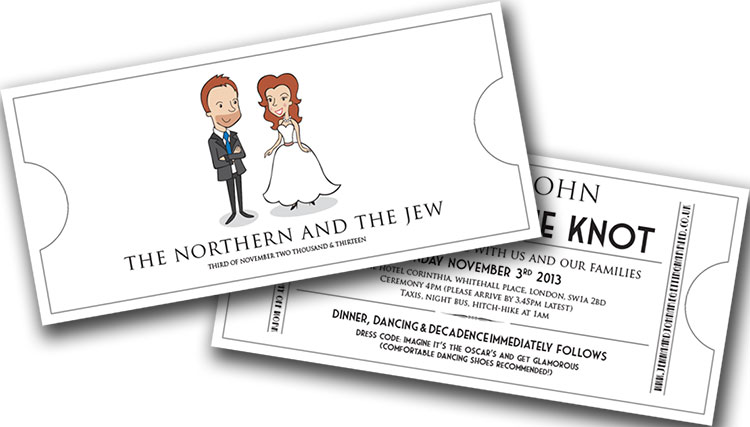 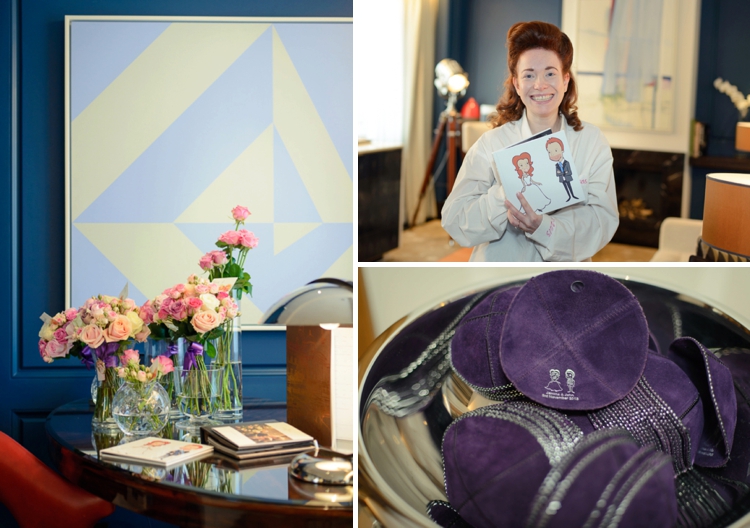 My  dress was designed by  White One by Pronovias  and I bought it  from  Angelica Bridal  in Islington (a short walk from where we live). It was the third one I tried on and nothing that I thought I would where. My sister spotted it and asked me to try it on. I fell in love. It had the glamorous 40’s shape at the top that i loved but something about the full skirt and layers felt so silly and fun. When I twirled in it, the layers floated up. I felt like i could really have fun in it! At the reception we had a lot of Jewish dancing. As the ladies were swinging me round everyone kept tripping on the dress, so in the end I went in the middle of the circle and gave everyone a bit of the skirt to hold. I was turned into a giant parachute game – it was fantastic! 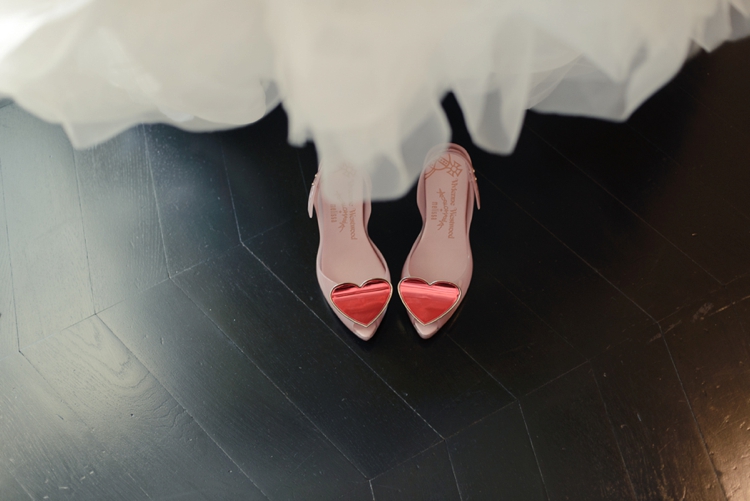 John: As my work is casual and all the suits I wear are on stage when acting (so I don’t buy them!), I generally don’t go in for suits. After an extensive search, I went into Chester Barrie and found the suit. It was the most expensive piece of cloth I’d ever bought, but think it worked out alright 😉

I wanted something I could keep wearing and when I tried it on, it was perfect. Every time I pop it on, it puts a smile across my face.

Jem bought me a surprise and gave them to me the day before with instructions to open on the morning. They were cufflinks for my shirt embossed saying 03.11.13. Obviously I wore those. They’re very special to me and so I break them out whenever I can. 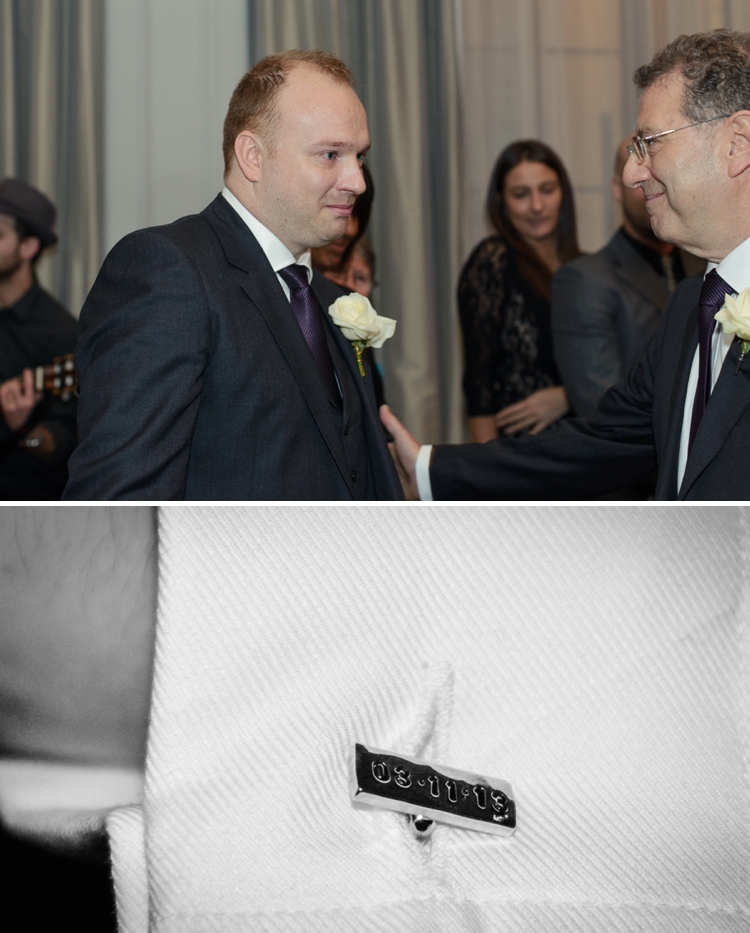 Jem: I had a maid of honour and two bridesmaids. My 7 year old niece was in a gorgeous white dress and my sister and best friend wore 50’s inspired dresses with halter necks from Vivien of Holloway, with bright pink petticoats underneath. 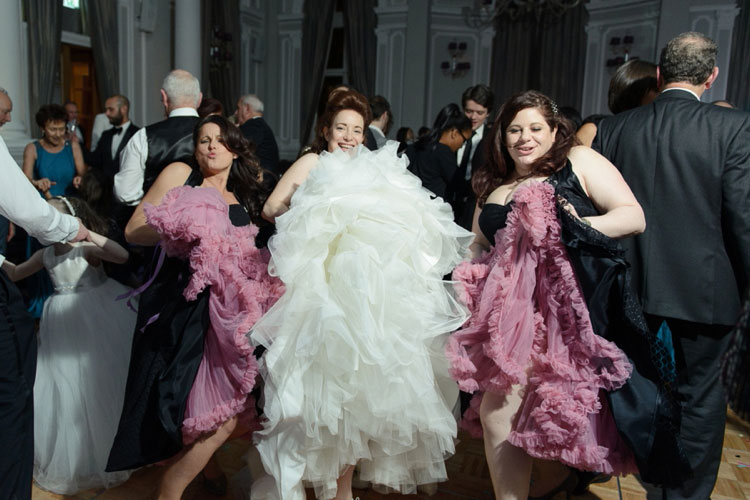 John:  As it was mixed between Jewish and other religions, when it came to the seven blessings, Rabbi Aaron Goldstein made a pitch perfect suggestion to our guests,

“If you are religious, like myself, you may like to say a little Amen and if not then you may like to pick up a flag and wave them as a sign to show that you join in with the sentiment that has been expressed”

A wonderful touch which showed us that he was in sync with us as a couple.  We had flags laid out on each seat and with different Lancashire and Yiddish sayings, mixed in with our wedding logo and some “yays” thrown in for good measure.

My friend, Michael J Hayes, is a wonderful actor, and like myself is a regular voiceover. He has a rich, deep American voice and when he read the verses from the Song of Songs, he gave it passion and intensity (and a fist clench). I watch back our video and really admire and appreciated his read.

Surprises by the bride and groom

We both had a number of surprises for each other throughout the whole day, but Jem got in there first with a special song. We had made up this silly song a long time ago and Jem, with her sister, put more words to it and got our band with Jem’s friend singing, to play it. It was a special, cheeky touch. As the song was coming to its close, our guests were singing along with ‘Northern and the Jew’!

Of course, there was a wonderful moment for both of us and especially for the family involving Jemma’s Papa, but I think I shall let Jemma tell that story.

Jem: As I walked down the aisle  I surprised  John,  thanks to  our wonderful band, with a version of At Last played on the trombone.

Jem:  I entered a competition and won our photography with Rhapsody Road.

John:  I had nothing to do with this. Jem went to a wedding fair and a few weeks later we were chosen!

We wanted simple and elegant. We used a local florist, Alan Carr from Angelic Flowers in Angel to do all our flowers include bouquet, button holes and tables.

John: I’ve been buying my flowers from Alan for years now and I’ve always loved the way he arranges flowers. His arrangements could make a £10 bouquet look like a million dollars. I suggested Jem go to him and she and her my mother worked on them together. We arranged lots of the wedding together, but this was an area I was not allowed in to!

John: The food was catered by the hotel and was excellent. Without a doubt, the best pavlova I have ever tasted. I still think about it now……..

For the cake, we went through a number of ideas (a meat and potato pie ‘cake’ was a serious/jokey idea at one point), but we did fall back on good old Marks &  Spencer (something similar to this) and it was a delicious sponge cake.

We did have a friend dress it with purple ribbon and we had ordered a purple cake topper reading ‘Mr and Mrs Last’ accompanied with icing designs of our logo made by Jemma’s sister. It was elegant (like Jemma), simple (like me) and a little bit quirky (like both of us). 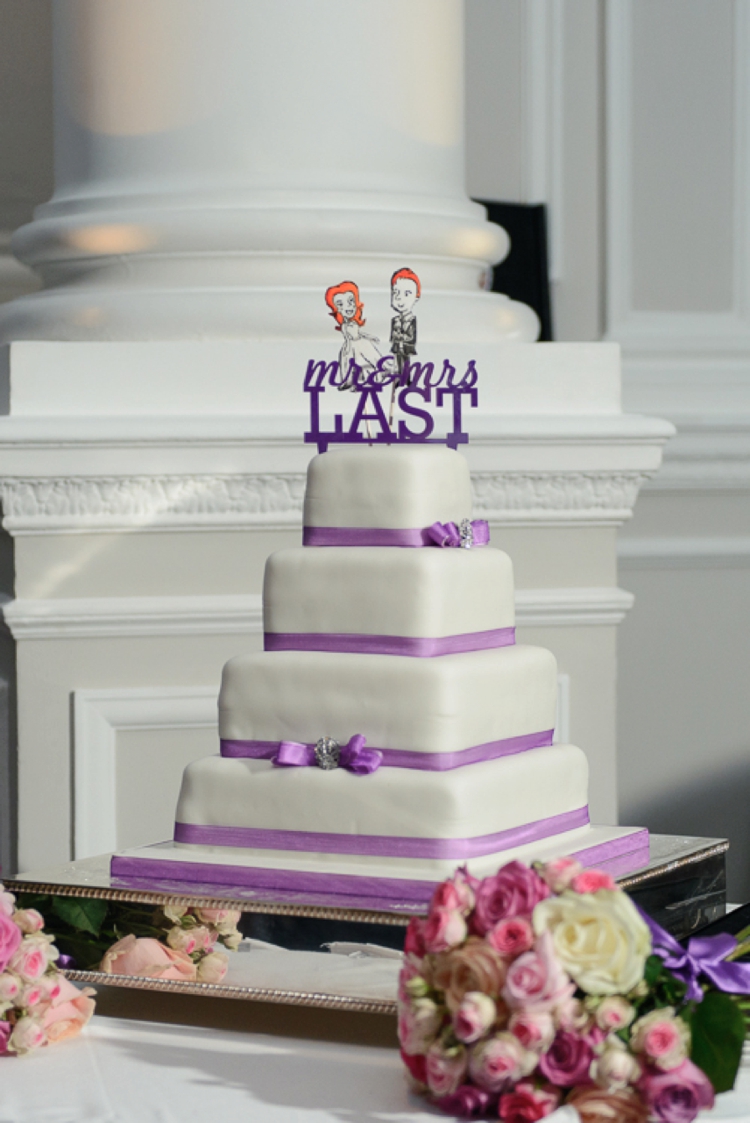 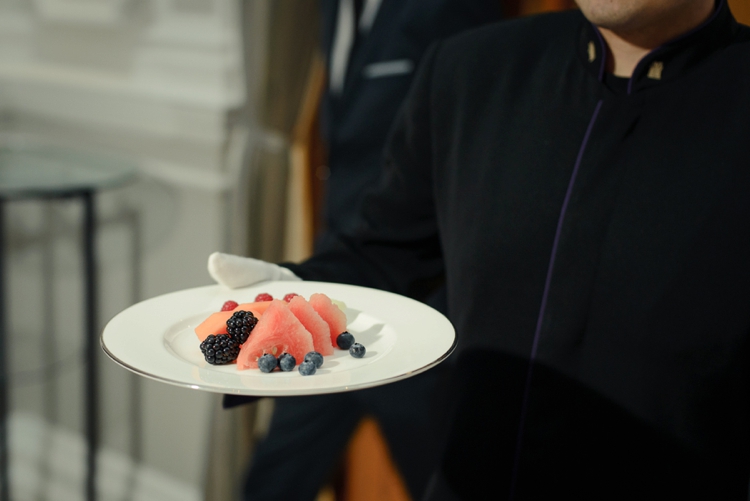 We loved  The Matzoh Boys,  a fantastic Klezmer/jazz band… It was when they played us a klezmer version of Inspector Gadget that we knew we had to have them! They started as a four piece for the ceremony and wedding reception and then by the time it came to Hava Nagila, the rest of the evening band had arrived to make it a 7 piece.

They then moved onto playing lots of great party hits and another couple of Klezmer songs. We wanted a great mix of our backgrounds, so John wanted more Klezmer thrown in so his friends and family who were less familiar with Jewish customs could get stuck in. Without a doubt, we would recommend these guys without a second thought. 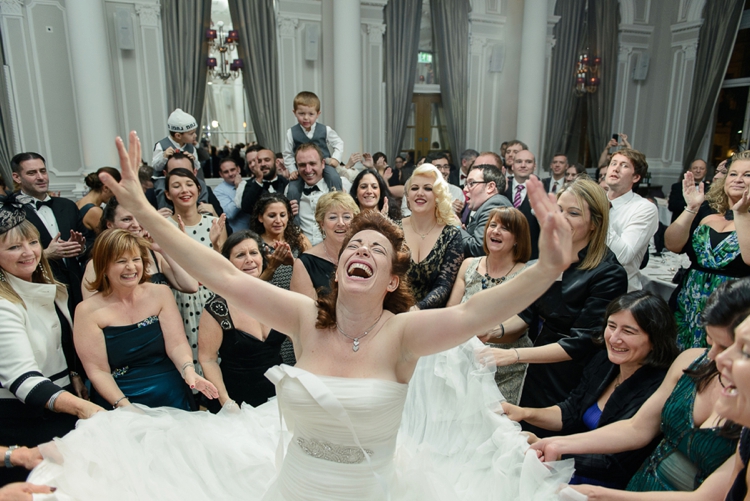 We ran a ‘Wedding Quiz’ on the tables and whoever won went home with our centrepieces. We also created kids packs to keep the kids occupied throughout the day including dot to dots of our cartoon characters and wedding word searches.

John: My friend from University, Ian Britt  wrote a song a few years ago which has featured in many US programmes and has had millions of views on Youtube called The Shape of Us. It sums up faith in love so perfectly and it has been ‘our’ song for a long time. Jem wanted him to sing at our wedding but I said he couldn’t make it. Little did she know that for our first dance I had got him down from Sheffield (his home town) to perform this one song for us. The look on her face was priceless.

BUT I wasn’t finished. When we first started dating, we saw Fiddler on the Roof at the Savoy Theatre in the West End. From that moment on, I knew I was going to do that bottle dance. So, I enrolled a few friends and family and as soon as our romantic dance had ended, we were ‘interrupted’ by a group of Russian Jews from Anatevka. They dressed me in traditional dress and we started to do the Fiddler on the Roof bottle dance. It was shabby, it was all over the place, but it was hilarious and it was ours.

And yes, we balanced bottles on our heads……..badly.

Jem: It is NOT the most important day of your life.   Do not buy into that crap. It is the first day of the rest of your lives together and will be spectacular and wonderful. On the day small things will go wrong, don’t worry about it, just love it. If your dress tears,  put on something else, if your make up runs – who cares… an unexpected guest shows up, hand them a glass of wine. What’s important it that you are celebrating your love for your partner with your loved ones, everything else is incidental.

Make sure to find a moment to just stop and take everything in, as it will go by far too quickly. I did at the reception. I remember standing to one side between the ball room and the bar and I could see everyone dancing, drinking, talking, laughing – some of our most favourite people in the world for a few sweet hours of our life all celebrating together. Incredible. 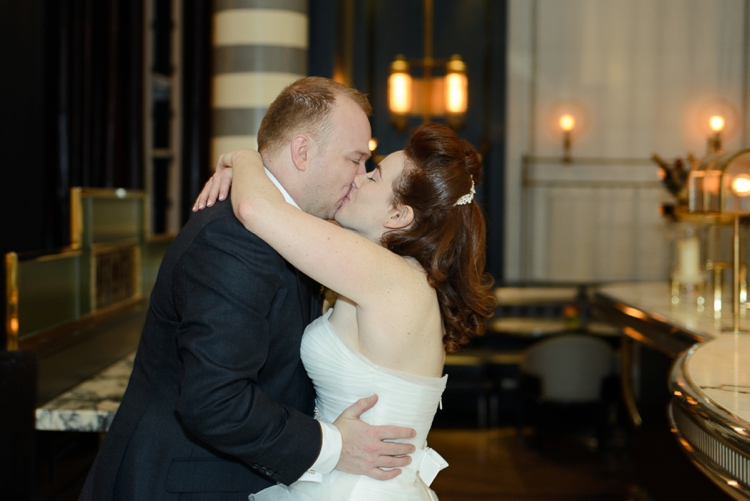