A new weekly Sunday series where  I ask some of the world’s best wedding photographers to pick out their favourite shot from their Jewish wedding portfolio. This week it’s the turn of Paul Rogers. 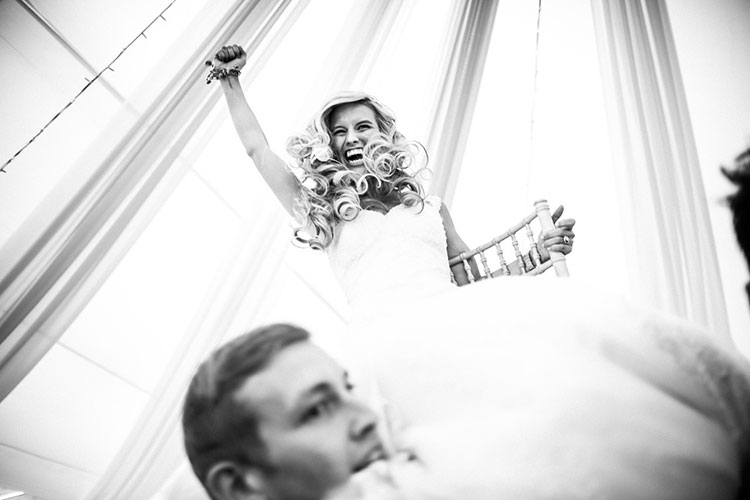 This is Hannah just an hour or so after marrying Simon in Harpenden last year. It was one of the best weddings I’ve ever photographed.

It could have been the perfect setting (a marquee tent in Hannah’s parents gorgeous gardens), or the fabulous music. Or maybe the incredibly thoughtful details or the delicious wedding breakfast. Nope, that’s not why this was such a great wedding to be part of. It’s always down to the people. And Hannah and Simon are two of the warmest, loving and most generous people I’ve had the pleasure to meet. They were having the time of their lives (as they should!) and Hannah didn’t stop grinning all day.

You could almost touch the energy in the marquee as the newly-weds arrived after the ceremony, and this moment during the Hora has captured some of that energy and love. It’s always a tricky thing to photograph – too far back and you lose the sense of being right in the middle of the dancing. Too close and there’s the danger of getting whacked in the face by an enthusiastic guest! But with Robert Capa’s famous words ringing in my ears “If your photographs aren’t good enough, you’re not close enough”, I’m right in there, where the action is.

I love this picture because it does what I think photography is all about. It’s captured a slice of time, when Hannah is overjoyed at her wedding day. Zoom right in, and you may notice that it’s not perfectly pin sharp. She’s moving, I’m dancing (really!) and the light in the marquee isn’t that great, so a little movement is understandable. But that’s irrelevant when the moment captured is so wonderful.

See more photographs from  this wedding

See more of Paul Rogers’ work on Smashing The Glass