We’re pretty sure this is a first for STG: an interfaith Jewish wedding that took place in the crater of an extinct volcano! Yes, really.

Though you’d never know it from the photos of Panama’s lush paradise of El Valle de Anton, where lucky bride Ida, a college counselor at a Jewish high school in Panama, has a country home in her family. She and Joey, a photographer and videographer, couldn’t have found a better spot for their dreamy modern country wedding. We’re positively drooling over the gorgeous photos by Mauricio Arias from Chrisman Studios and  Alvaro Chingand the wonderful trailer by Visu Films.

Despite having 600 (!) guests at their wedding, they managed to keep the feel intimate by keeping things personal with touches like personalized vows the bride and groom read to each other (both of which happened to begin by talking about food – our kind of couple!) and having their miniature dachshund walk down the aisle.

We’ll let the bride, who looked lovely in  Patricia Avendano, fill you in on the rest.

Ida, the bride: We met in a geology class at Florida State University (they have a branch here in Panama). And our love story began like any other… with chocolate chip cookies! As usual, like with any other man (including the skinny ones like him) the way to his heart was through his belly. I brought cookies to class one day and offered them to everyone in the class and the rest is history!

Before we started dating we became friends, good friends, at least that’s what I thought. But friendship quickly turned into something more and in February 2011 we started dating, even though we knew I was leaving for college in the USA in August of that same year. We did long distance for 3 years, have been dating for 7, and now we’ll be together forever because we are getting married!

END_OF_DOCUMENT_TOKEN_TO_BE_REPLACED

There isn’t a single thing I don’t love about this wedding. And when I say love, I mean head over heels, squeal-worthy adoration. As I was putting the post together I was genuinely bursting with excitement at how gorgeous everything is, how adorable Jill’s report is, and how fabulous the photography by Chrisman Studios is too. Honestly, I really had to stop myself from including every. single. image. I’m a big fan of Chrisman Studio’s work (I love how they tell a story), and it’s no surprise that I’ve featured their Jewish weddings on the blog many times before.

Jill is a professional photographer herself, and her work played its part in the way she met Mark. It’s a wonderful story and Jill tells it brilliantly. I literally had goosebumps. Although they met in the ‘new way’ (by which I mean over the internet), to me it feels like a truly romantic old-fashioned love story! Have a read and see…

These two married at a gorgeous rustic barn in California, complete with all sorts of travel-related elements (to reflect Jill’s travel photography career) including personalised passports for each guest with all the wedding details and a Jill and Mark crossword puzzle. Fabulous!

I must also single out Jill’s astonishing Vera Wang frock, and a Pop Art ketubah I am literally obsessed with. Indeed I featured it in this round-up of my favourite ketubah designs last year!

This is SUCH a lovely one, I hope you enjoy it as much as I did!

Jill, the Bride: In 2012, I received my first assignment from National Geographic. They sent me to Sydney, Australia for five weeks to photograph the National Geographic Traveler Guidebook: Sydney. When I got this amazing opportunity I had never been more excited about anything in my entire life.

About one week into my time in Sydney I got a message on OkCupid from Mark. Mark’s email made me laugh. He was thoughtful. His profile was witty and he looked very cute in his photos. He also took the time to find my photography website, stalk me, and tell me what he liked about my work. I appreciated that effort. Something just intrigued me about him.

I wrote him back telling him I would be gone for the next month and that maybe if he was still single when I returned we could go on a date. He did not seem phased by me being gone at all. He said, “Why don’t we talk on Skype and see if we have anything in common and go from there?”

We decided to start off on Skype with no video, just our voices. Our first conversation lasted hours, as did our second and third. Then we turned on the video, which actually was not as awkward as you may think it could be. Our conversations were very easy. I felt like I was myself from the beginning, probably because I felt like I had nothing to lose.

He started serenading me early on, playing his guitar and singing for me. He would ask me what my favourite songs were and within 24-hours he had taught himself how to play and sing them to me over Skype. I became a Skype groupie. I would send him my best photos of the day and we would talk about my solo adventures. We talked everyday while I was away. I would catch myself on the phone just smiling the whole time, and daydreaming about this mysterious Internet man.

I never would have admitted it out loud, because it sounds crazy, but there was a part of me that knew he would be my husband before we even met. He says the same thing about me.

The day after I returned home from Australia we had our first date. He came over to my apartment (probably not the smartest idea for a first date with someone you met online – but I felt like a murderer wouldn’t have put in so much time talking to me just to kill me). I was jet-lagged, exhausted and wanted a night at home. We went food shopping and Mark made me dinner. The date was so fun – it just felt right.

That night, he asked me if I would be his girlfriend. I was shocked. I was used to men waiting as long as possible to commit to anything solid, and here we were on our first real date and Mark wanted to be my boyfriend. He said, ‘Here is my rationale – we have been talking for a month and I don’t want to see anyone else. If this does not work out, we break up, if it does then great!’

That made perfect sense to me, and I said ok…

END_OF_DOCUMENT_TOKEN_TO_BE_REPLACED 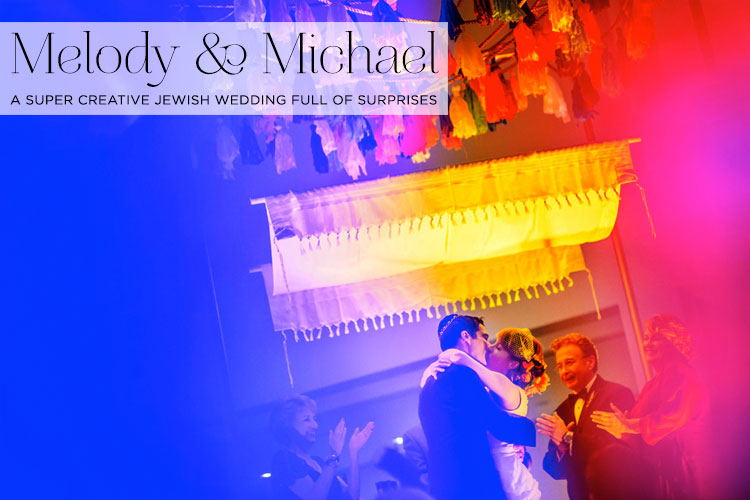 “Just because the wedding industry encourages conformity, you don’t have to comply. Do it your way!”

Top advice from this morning’s bride, Melody, and yes she did! This is a wedding EXTRAVAGANZA. Seriously — I’ve never seen anything like it and the truth is, I don’t even know where to begin. Perhaps I should start by saying that I think this is one of my favourite weddings EVER to appear on Smashing The Glass and having blogged over 150 super cool real Jewish weddings I don’t say that lightly.

There is also a a drag queen performing as Beyoncà© AND a flash mob of kids ‘interrupting’ the first dance. You have to see it to believe it (check it all out in the highlights video at the end by the super talented Rodinis Films).

Oh and gummy bears are loosely woven into this the big day too.

The whole shebang was documented by photography geniuses, Chrisman Studios. Every time I feature one of their weddings I know it’s going to be a memorable post, but this one is an absolute corker. It’s clear that Melody and Michael invested so much time and effort into making their wedding uniquely them and I can’t wait a moment longer to show it to you.

Come on then… let’s take a look. Over to Melody, today’s awesome bride. 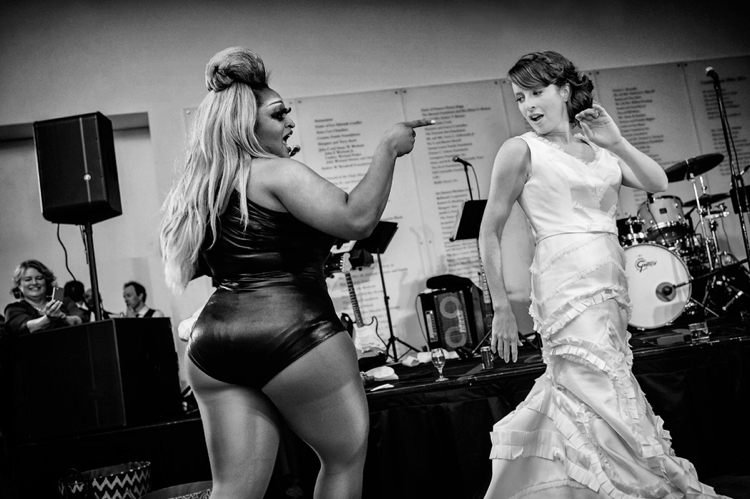 Melody, the Bride: We met through Mellow Mushroom (a national pizza franchise in the USA). Michael is a multi-unit franchisee, and my father is one of the founders of the company. My dad introduced us, he thought we would make a good match. We fell in love over pizza!

END_OF_DOCUMENT_TOKEN_TO_BE_REPLACED 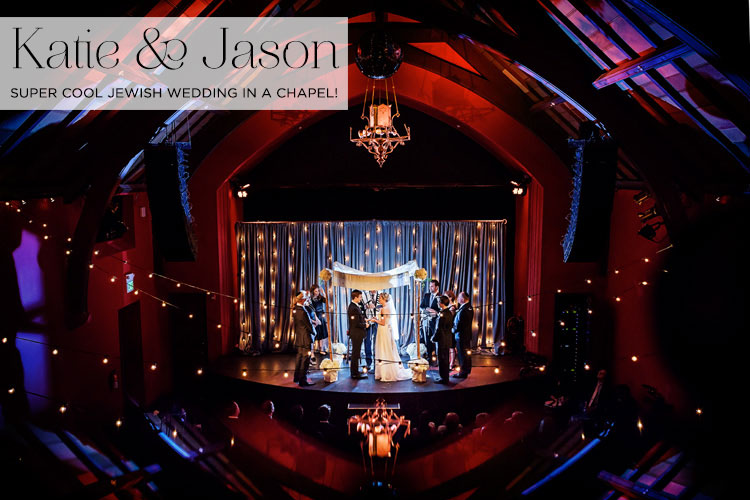 A Jewish wedding in a chapel? Er… YES! You’ll probably know by now that nothing Jewish-wedding-related is off limits on Smashing The Glass (in fact, the more unusual, the better!) and it’s true, today’s Jewish wedding took place in a breathtaking setting that was once a chapel. It’s now a music venue and the bride and groom’s chuppah ceremony graced the stage where the bands usually play, whilst the guests watched on with glasses of wine in their hands.

Everything about this wedding is the epitome of the STG mantra of having the wedding you want, your way. It’s a super creative fun-filled W day — one of those where you will need to come back time and time again to view the images just to make sure you didn’t miss any of the achingly cool details.

Katie and Jason are insanely, crazily, and meant-to-be-together-forever in love. It screams out from the incredible imagery by STG-faves Chrisman Studios — and it screams out of their wedding report too (they wrote it together…).

Katie and Jason, the Bride and Groom: We picked the venue because we wanted something non-traditional. It was in our neighbourhood and we loved the idea of an urban, city wedding. The Chapel is a fun music venue, and we viewed our day as an opportunity to celebrate and party with all of our closest friends and family.

END_OF_DOCUMENT_TOKEN_TO_BE_REPLACED 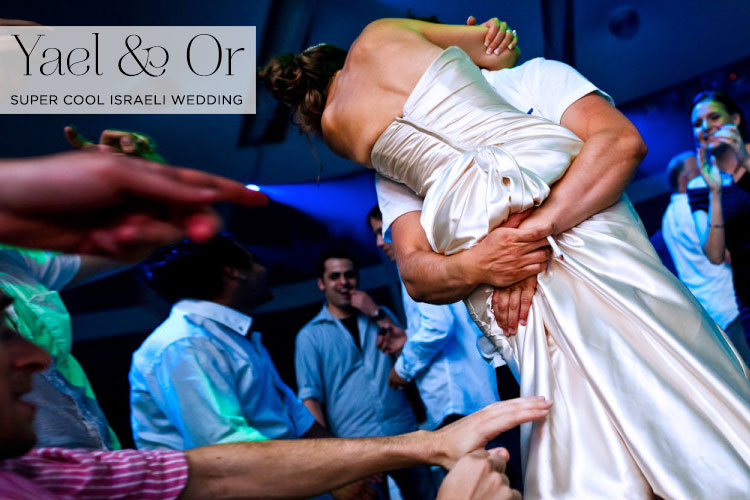 Sometimes you just know when two people are made for each other and this is most definitely the case with Yael and Or.  Together since high school, this fabulous couple decided to celebrate the start of their married life –   the first step in building their own Jewish home –  not far from the small town in Israel where they both grew up and where their families still live. Theirs is a totally sweet, and totally stylish tale.

You can’t get much better than a wedding by night in Israel.  It’s hot, fun, life-affirming and just good for the soul and oh my how beautifully this is captured by Chrisman  Studios.

Yael and Or had been crazy about these photographers for a long time and made damn sure that they had them snap up some of the most impactful wedding photographs I’ve ever seen.

I mean really, some of these images are just ridiculously beautiful — and characterful.   The shots of the swimming pool in particular look like they belong in a Taschen coffee table book.   They’re almost theatrical in their vivacity and vibrancy — which perfectly sums up an Israeli wedding. And that final shot… the  bride sure knows how to party like a rock star. Amen to that!

My other stand out love of Yael and Or’s wedding is their unique ceremony.   After cocktail hour, all 300 guests stood, yes stood, in front of  the chuppah — which just so happened to be on stage —   singing along to the Jewish prayers and songs, creating a completely engaged and loved-up atmosphere.  Perfect.

And before I hand over to the bride, it would be churlish of me not to mention  that apart from Or, there is in fact another  “the one” in Yael’s life — and that is her wedding dress.   Theirs was also a match made in heaven and one that was also approved by the whole family… even the groom!