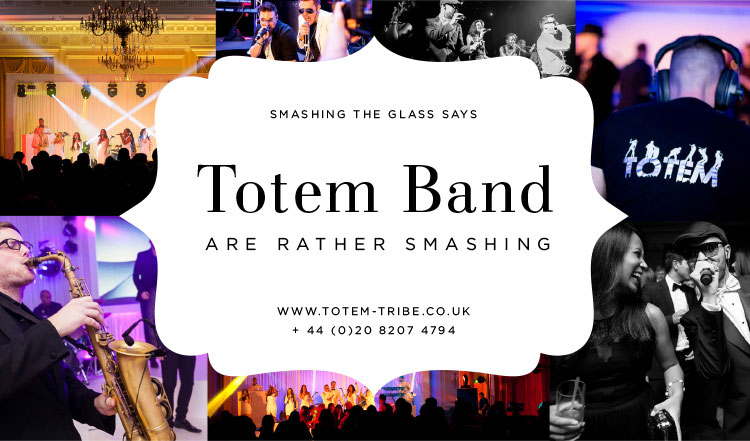 TOTEM was formed back in 2012 and launched with a group that re-shaped the landscape in live DJ event entertainment. Since then they’ve gone on to become an international team of nearly 50 of the worlds finest musicians, singers and performers with capacity to operate at multiple concurrent events, worldwide, whilst always delivering the performance that TOTEM are renowned for.

TOTEM now is available in multiple flavours from a smaller DJ Live band all the way up to their 22 piece Live show band. As well as a number of specialist cabaret acts like The London String Collective and The Pop Up Party Band

Today, TOTEM are lead by founders James and Brett (with a combined 30 years of event and performance experience) whilst being supported by a tight knit team, headed by Amy, of specialist event planners and event pros.

> SEE TOTEM ON SMASHING THE GLASS

We brought Totem over from London and I couldn’t be happier that we made that decision. Like everyone, we love the Israeli dancing (and so do our friends) so we wanted a band that would get it right. Totem actually did a second round of Israeli dancing before we all went home, which ensured everyone left on a high! The band got the party going and the atmosphere was amazing. It wouldn’t have been the same without them.”

We had the fabulous Totem. We went to see them and instantly knew that they were the band for us. They just embodied the party vibe we were after, we loved that they could do music from across the decades and I was hooked when I saw them perform a 90s garage set!”

Totem… It was always going to be Totem. Every event I’ve seen them at, I seem to be dancing on the floor the entire night. Watching them perform is literally like being at the greatest concert of your life. Phenomenal singers, incredible musicians and the work that goes into it from behind the scenes is just amazing. Nothing was ever too much for them, always around to take many, many calls and they made our day so unbelievably special.”

Our music was fantastic, overall. We chose to use Totem from the UK because we had witnessed their fantastic work first hand at other events. Brett Warren directed our music, with help from Moni Tivony, who as well as helping us party the night away also acted as our Chazan at the Chuppah, and whose voice brought the whole wedding party to tears!

Brett sang a beautiful soul set, and Moni was out Chazan turned rapper, with a UK garage set that got all of our guests involved.

We also made use of the location by all jumping in the pool at 12 and continuing the party in the pool into the early hours!”

We had Totem, who I have known and worked with since they started out. They were absolutely amazing and completely smashed every dance set as well as all background sets. We had a 10-piece live band and then a DJ with musicians for the afterparty. They completely understand the right music to get everyone up and dancing and Brett learnt An Evening in Roma, especially for my mum.”

We chose Totem, rather than a local Italian band, because we wanted a huge party from start to finish and we knew that Totem could provide that for us. We also wanted them to provide the music for our chuppah. They didn’t disappoint — the singing at the chuppah was very emotional, and the intensity of the performance of every single band member meant that the dance floor was packed all night.”

We flew out part of the most incredible band, Totem. They made our day amazing. From singing me down the aisle to dancing the night away, these guys made our wedding day. They made the party happen, and we still have guests saying how incredible they were.”

We hired Totem’s live DJ band, because they are just wonderful. They are all exceptionally talented professional musicians and lovely people.

For us, the music was the most important element of our wedding party. We love our music and know that it is crucial if you want a great party — Totem have an incredible gift of being able to read a crowd before they react and they matched our joy and energy perfectly.”

We had the most incredible band — Totem. They blew us away, and made out wedding feel so fun and special; we had the most amazing party. Right from the very first meeting with Totem, we told the band manager Brett Warren that as soon as the party started, we didn’t want one person on their seats — and wow, did they deliver!”

> Back to UK Entertainment

> Back to UK Recommended Vendors