Today is beyond exciting for the team here at Smashing The Glass, as not only are we kicking off our exciting new “Five Minutes with…” series where the Jewish wedding industry’s top movers and shakers answer quick-fire questions, but we’re starting the series with a BANG (which is the understatement of the year!).

First up in our STG hot seat is none other than the Ron Ben Israel, arguably the finest wedding and special occasion cake designer in the world.

Not only is he the chief-owner of Ron Ben-Israel Cakes in New York City, but from 2011 – 2013, he also hosted the cooking competition TV show Sweet Genius, and he is currently a judge on Food Network’s Cake Wars.

Ron was born in Israel, before making the Big Apple his home. Having changed paths after a fifteen-year professional modern dance career (uh… is there anything he can’t do?), he was led to the Big Apple, where, in 1996, his cakes were discovered while on display in the windows of Mikimoto on Fifth Avenue and commissions quickly followed from Villeroy & Boch, Baccarat, DeBeers, Bloomingdales and Bergdorf Goodman.

In addition to his cakes gracing many of New York City’s most fabulous hotels and venues, they have also have been featured in The New York Times, In Style, Vogue Magazine and Martha Stewart Weddings, with which Ron has collaborated extensively for over 20 years.

Oh, and his epic successes have been chronicled on The Oprah Winfrey Show, Top Chef, Just Desserts, The Late Show with David Letterman and The Martha Stewart Show.

We could talk all day about Ron’s incredible career, but we’re quite sure at this point that you’d rather hear from him! All we’ll say is we are extremely fortunate and honored to host Ron on the STG pages, we’re in LOVE with his epic, sugar-paste flower adorned designs (get your fingers on that Pinning button, guys) and we’re very sure you’ll all enjoy reading his quick-fire interview as much as we did! 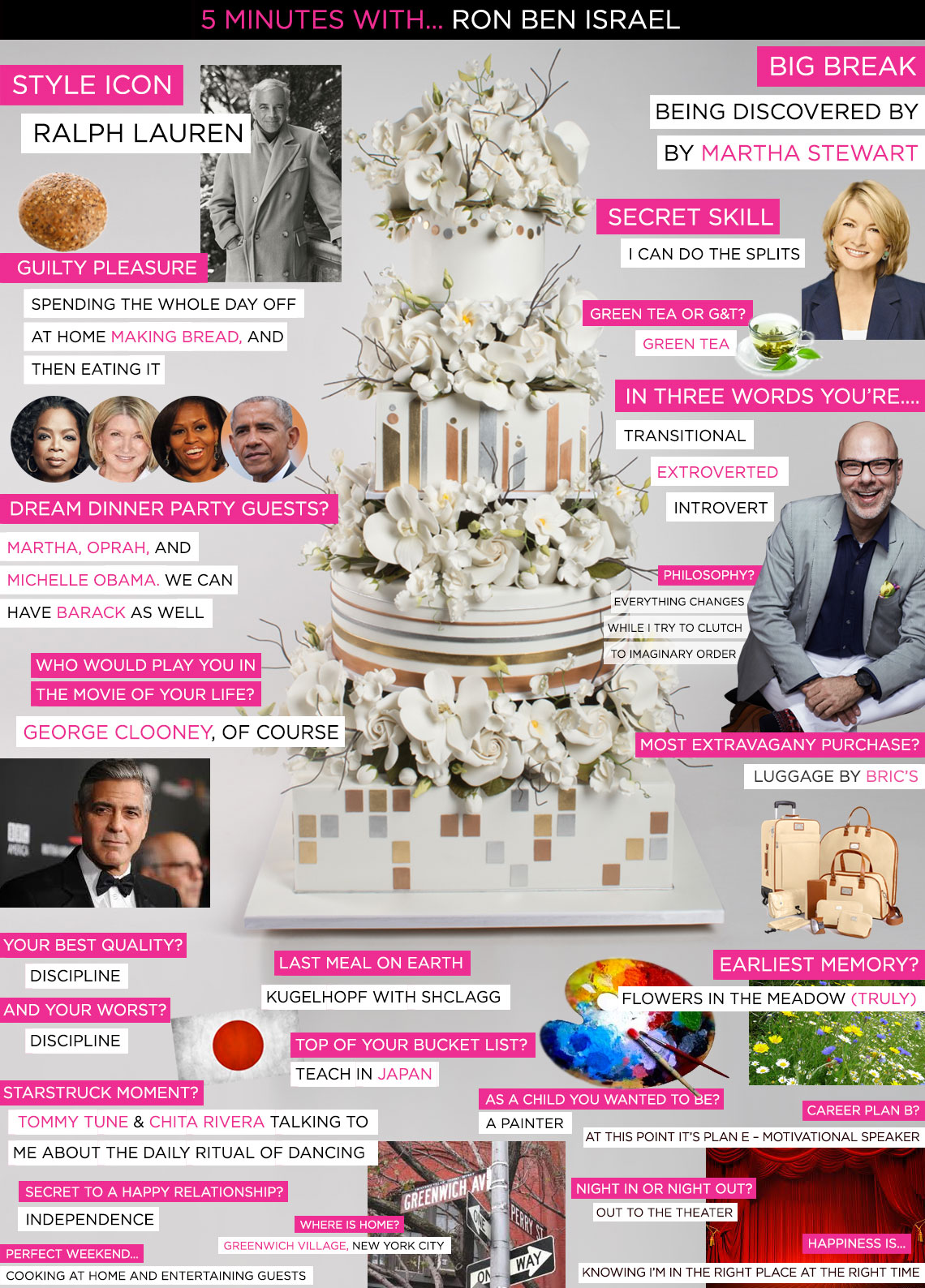 GUILTY PLEASURE?
— Spending the whole day off at home making bread, and then eating it

WHO WOULD PLAY YOU IN THE MOVIE OF YOUR LIFE?
— George Clooney, of course

AS A CHILD YOU WANTED TO BE?
— A painter

SECRET TO A HAPPY RELATIONSHIP?
— Independence

AND YOUR WORST?
— Discipline

DREAM DINNER PARTY GUESTS?
— Martha, Oprah, and Michelle Obama. We can have Barack as well

STARSTRUCK MOMENT?
— Tommy Tune & Chita Rivera talking to me about the daily ritual of dancing

SECRET SKILL
— I can do the splits

PHILOSOPHY?
— Everything changes while I try to clutch to imaginary order

MOST EXTRAVAGANY PURCHASE?
— Luggage by Bric’s

NIGHT IN OR NIGHT OUT?
— Out to the theater 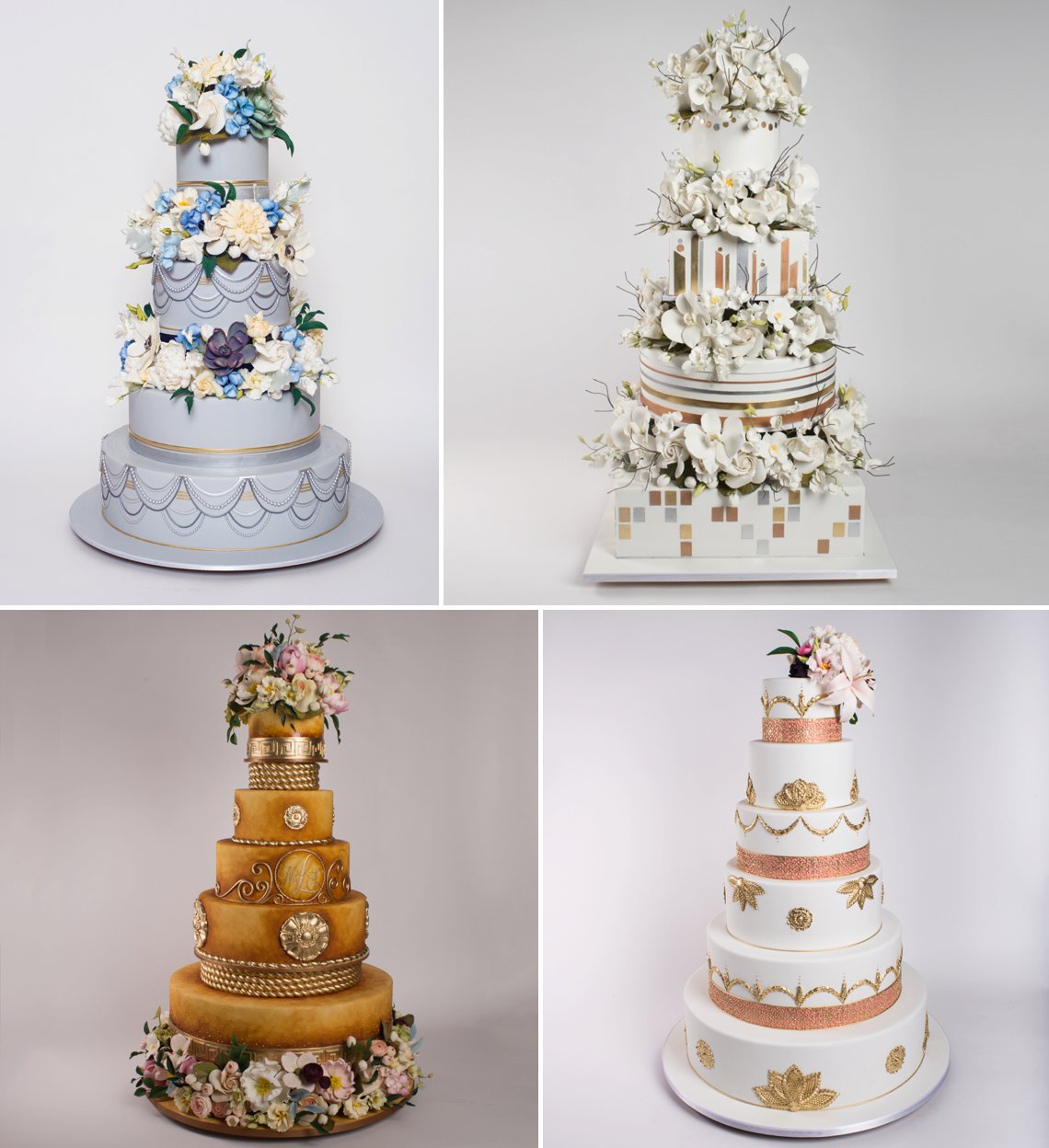 Thank you Ron — what a wonderful insight into the man himself, and what a likeable, witty, talented person Ron is!